11 Ways You Can Combat Climate Change

As difficult as it might be to accept, individual action is needed to heal the planet, and each of us is responsible to make positive changes in whatever way we can. 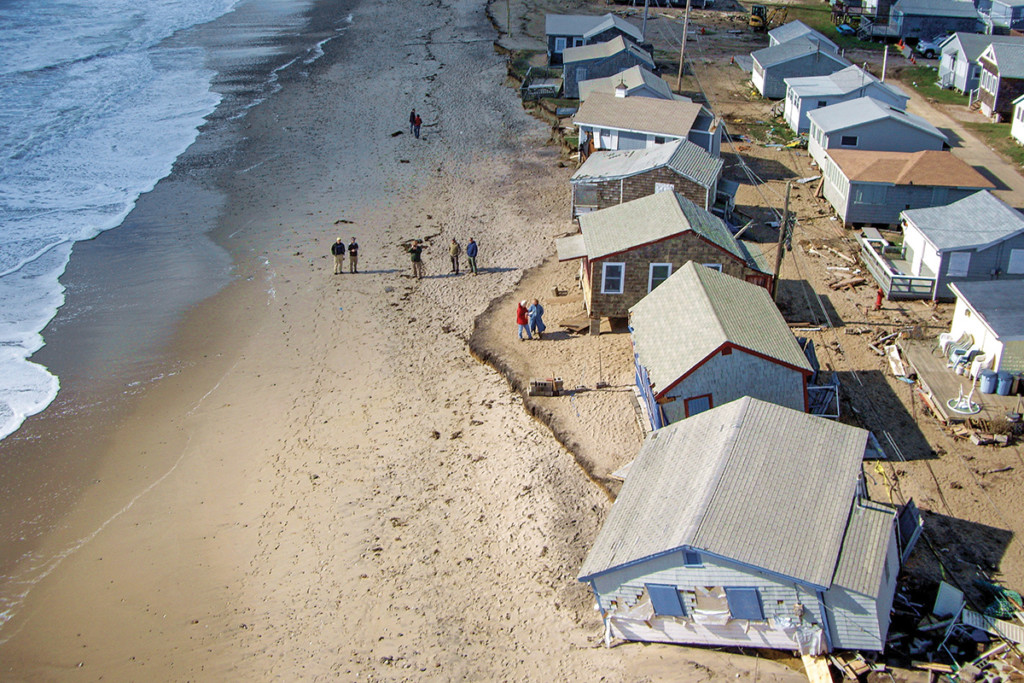 Roy Carpenter’s Beach in South Kingstown in 2012 after the destructive force of Superstorm Sandy. Beach erosion is only one of the problems Rhode Island grapples with when dealing with climate change. Photography by Michael Cevoli.

As climate conditions worsen, efforts should intensify to rectify the damage inflicted on the planet over the past decades. Local, national and international groups are working tirelessly to save the world, but for a lot of us, it is still unclear what the world needs saving from.

Climate change, also known today as the climate crisis, is the impact of humans burning fossil fuels (coal, oil, natural gas) and thus releasing carbon emissions into the atmosphere. These emissions are more commonly known as greenhouse gases, because they cause the atmosphere to retain heat, just like a greenhouse. Unlike a greenhouse, however, this trapped heat doesn’t help tomatoes grow. Rather, the heat (global warming) changes weather patterns, food systems, ecosystems and many other aspects of life on Earth. These changes lead to water levels rising, local flora and fauna being forced to migrate out of their natural habitats, disease spreading and new pests destroying crops, among other issues. Should the Earth reach what experts have found to be the critical increase of 3.6 degrees fahrenheit, the results would be disastrous, from near-extinction of coral reefs to sea levels rising catastrophically around the world.

There is less time to revert the world back to a safe temperature than one might think. Rhode Island, the first and fastest warming of the contiguous continental states according to an article on climate change published this week by The Washington Post (2°C: Beyond the limit: Extreme climate change has arrived in America), has already reached this increase. The expected destructive effects have followed in suit. As ocean levels rise, coastal communities experience coastal erosion; Roy Carpenter’s Beach is losing an average of 3.3 feet a year to coastal erosion. Rising sea levels also cause tidal (“sunny day”) flooding in coastal cities and towns. Heavy rains become more common every year, the weather gets more erratic as the world heats up, and as the air warms, so does the water. Over the past fifty years, the surface temperature of Narragansett Bay has increased 2.5 to 2.9 degrees F, which harms the species that live in it. As Andrea McGimsey, senior director of the Global Warming Solutions Campaign with Environment America says, “Maine, Massachusetts and Rhode Island have already seen a migration of the lobster population northward, which will likely continue if lobster can’t find their preferred water — and this has already upended lobster fisheries and local economies.” In the past two decades, lobster catches, a staple of the local Rhode Island economy, has dropped seventy-five percent. From weather changes to coastal erosion to our core economy, climate change is hurting Rhode Island.

Terrence Gray, Deputy Director for Environmental Protection with the Department of Environmental Management (DEM) says, “In many respects, responding to climate change is the biggest environmental challenge we face.” As difficult as it might be to accept, individual action is needed to heal the planet, and each of us is responsible to make positive changes in whatever way we can. Here are eleven ways you can combat climate change:

This one is easy: simply turn off the lights when you leave a room — it’ll help lower your electricity bill, too!

The fewer cars on the road, the fewer carbon emissions entering the atmosphere. So take the bus or train, ride a Jump bike or use any other form of public transportation to reduce your carbon footprint and save gas money. Another good option is carpooling; more people in one car means fewer cars on the road, and you get to use the carpool lane. Running a quick errand? Walk or bike instead, and you’ll get some exercise in addition to saving the planet.

If you really need to use your car, invest in a lower emission vehicle. More and more electric cars are being manufactured, and while they might be a little pricier than gas-guzzling alternatives, you’ll ultimately save money by never spending another cent on gas.

There are many sustainable, renewable energy options on the market, so give them a chance. Installing solar panels is a great start, particularly if you have a household that uses a lot of energy.

There are endless options here, most of which are pretty simple. For example, you can buy a reusable straw, water bottle or mug. Many coffee places provide a discount if you bring your own container, so that’s an added bonus if you’re a coffee drinker. You can also get creative with your recycling: instead of throwing out that used peanut-butter jar, rinse it out and use it as a cup (it’s trendy, too). Instead of tossing your finished yogurt container, take it to the beach and use it to build sand castles (just make sure you take it back with you when you leave).

Commercial meat and dairy production is a major detriment to the environment; the waste and carbon dioxide that comes from mass produced livestock is a major contributor to global warming. Cutting meat out of your diet all together is great, but if that isn’t an option for you, don’t worry; just cutting out meat one less day a week can have an incredibly positive impact on the climate crisis. If that is still too much, then try to buy your meat from local and sustainable farms who implement more environmentally-sound farming practices.

Simple signs are a fun and easy way to propel your company or business in a green direction. For example, put up a sign over the recycling bin reminding folks to recycle, or a note next to the light switch asking that it be turned off if no one is in the room.

The more you know, the better you can aid in the crisis. So if you’re a student, take a class on the environment. If you’re a busy parent, read a book with your kids about climate change. There are endless options and easy, fun ways to educate yourself. It’s every individual’s responsibility to make sure they are doing everything they can to understand it. To help you out, here are a few great links to extremely informative and reliable sources on climate change:

How do we know that climate change is happening?

One of the most powerful things you can do is speak up and tell your representatives how important climate change issues are to you, because their jobs are literally to represent your interests. So if climate change is an issue you care about, let them know. Below are the phone numbers for Rhode Island’s elected officials. Giving them a call will take five minutes out of your day and it will make a difference. Some tips on calling your representatives can be found here.

Don’t sweep it under the rug. If you see a change someone could make, let them know, kindly, how they might be able to help the planet. Now that you have all this great information and resources, share them! Silence only contributes to the problem. Be the voice of change and be a teacher to everyone around you.

Research shows we have eleven years left before the damage we have inflicted on the planet becomes permanent, so let’s not waste another day. Speak up, take action and make change. It’s time to save the world.

Thanks to Andrea Gimsley (Environment America), Elizabeth Stone and Terrence Gray (DEM) for their thoughtful contributions and work in fighting climate change.

Can Development Laws Elevate Us Out of Sea Level Rise?