Can Development Laws Elevate Us Out of Sea Level Rise?

Up, up, up goes oceanfront real estate in Rhode Island.

Watch Hill is an old neighborhood, where houses with names like Windridge, Waveland and Sea Swept began to take their positions on the ridge more than 160 years ago. The first lighthouse keeper, Jonathan Nash, recognized its potential as a retreat, opening his Watch Hill House to boarders in 1833. Other summer colonists followed, attracted by the “tonic effect of this air on the appetite, the shattered nerves and overworked brain,” according to one early history. With sweeping views of Block Island Sound, the Atlantic Ocean and Little Narragansett Bay, Watch Hill was also a natural rampart, used by the Niantic tribes in the early seventeenth century to anticipate the arrival of warring parties of Montaup Indians and, nearly 300 years later, by the United States military as a coastal battlement.

But Watch Hill’s most implacable foe has always been Mother Nature. In 1938, the Great Hurricane wiped fifty houses off Napatree Point, a finger of land curling into the sound. Today, the village is under the increasingly frequent assault of water coaxed by tidal force or blown in by Nor’easters over streets and parking lots, cutting off access to Napatree and giving the old house names a sardonic twist. 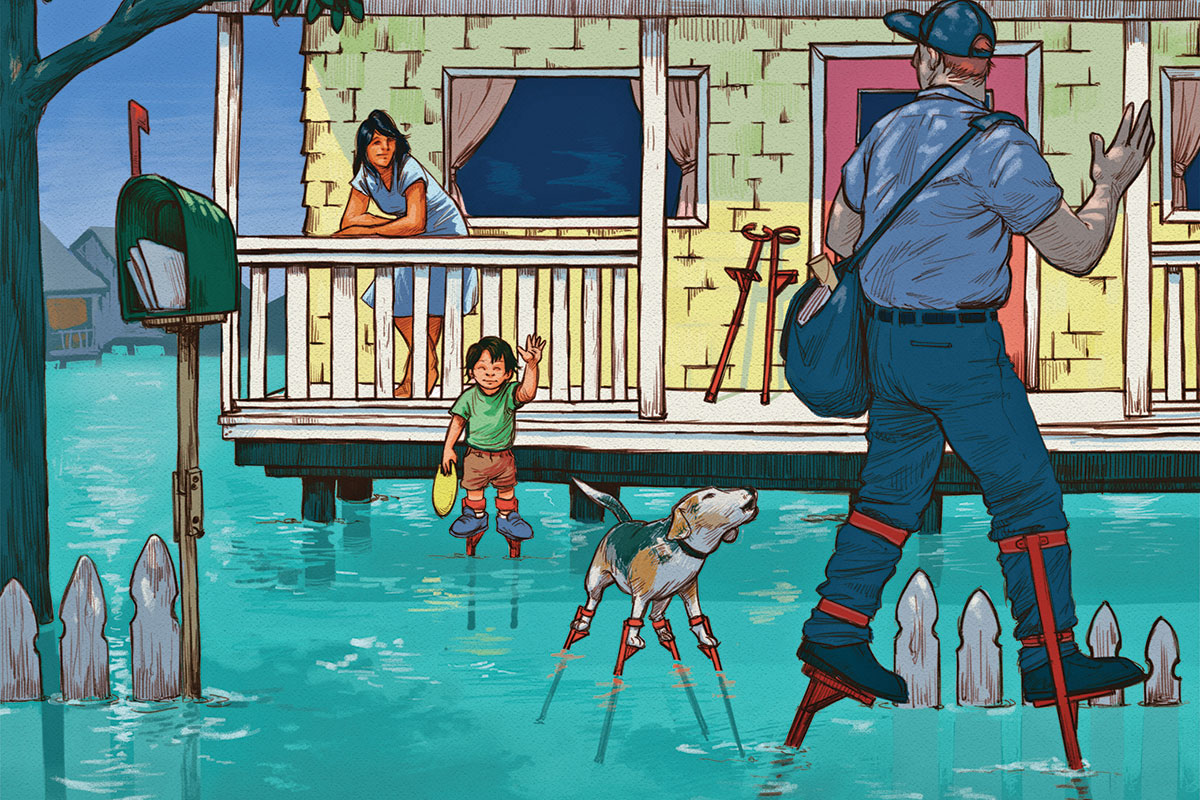 “When we get one-and-a-half to two feet above normal high tides, we get nuisance flooding,” says Peter August, a University of Rhode Island environmental science professor and chairman of the Watch Hill Conservancy’s Napatree Science Advisors. “In 2013, we had twenty-three days at one-and-a-half feet above normal high tide and five days over two feet. At two feet, you can’t drive anywhere.”

In 2016, the Watch Hill Yacht Club decided to lift its clubhouse out of the rising waters. Over nine months, it jacked up the cedar-shingled structure by fourteen feet onto steel and timber pilings. The kitchen, offices and club room moved to the second floor; new garage doors on the first floor could be rolled up to let the water pass through. It re-opened in June 2017 as an example of resilient renovation.

Can we elevate ourselves out of climate change?

By 2100, Rhode Island can expect up to 9.6 feet of sea level rise, according to the National Oceanic and Atmospheric Administration’s (NOAA) latest estimate. Rhode Island is a sea level rise hot spot, meaning our water levels are rising higher and faster than global averages. NOAA projects Rhode Island’s sea level rise to be one-and-a-half feet by 2020, based on the “high curve,” and more than three feet by 2050. The Union of Concerned Scientists estimates that by 2100, flooding threatens $3.6 billion worth of Rhode Island property — $835 million alone in Westerly.

As a nation, “we are quite behind,” says J. Timmons Roberts, a Brown University environmental studies professor and head of its Climate and Development Lab. “Every other country in the world accepts the science of climate change and the need to prepare. Climate denialism is almost entirely a U.S. phenomenon.”

Countries such as the Netherlands, the United Kingdom and Bangladesh operate as laboratories of climate adaptation, he says, while in the United States, coastal states, like Rhode Island, are leading the way. On March 1, a new state law took effect that attempts to preserve property values and taxes by changing the way building height is measured to elevate coastal structures out of flood waters. It also allows builders in flood zones to bypass the maps generated by the Federal Emergency Management Administration (FEMA) to estimate the base flood elevation — the expected water height in a century storm — and use the more accurate flood maps developed by the Coastal Resources Management Council (CRMC) and University of Rhode Island scientists. For the CRMC, the new law was a policy victory. But municipal planners in coastal towns were immediately opposed, fearing their shorelines would by dominated by super-sized structures curtailing access and water views.

“We wanted, the day after a storm, for you to walk back to your home. That your house is still standing,” says CRMC Executive Director Grover Fugate. “Some communities are more concerned about how the communities are going to look than the long-term.”

Charlestown Town Planner Jane Weidman says their objections are “beyond aesthetics. Bulkier buildings on shoreline mean more debris after a storm. You’re encouraging people to over-develop in areas they shouldn’t be developing in the first place. Planners and building officials were not brought into the discussion, but the municipalities are left to implement the laws.”

The conflict is the first of what, no doubt, will be many as communities grapple with adaptation to climate change.

“Resilience is really complex,” says Kristiane Huber, a fellow with the Center for Climate and Energy Solutions. “It requires a lot of coordination among a number of different [state government] departments — almost every one of them is affected in some way. It’s a huge undertaking and it’s also challenging to continued execution between governor and state legislature turnovers.”

The CRMC’s permitting authority puts Rhode Island ahead of some coastal states. In 2016, the council began a two-year effort to bring reality to future coastal development. FEMA’s flood maps have been the principal basis for state and municipal planning and policies in flood zones and for the National Flood Insurance Program, required by lenders for coastal properties. But the CRMC has maintained that FEMA flood maps are arbitrary, based on incorrect data about wave height, wind and storm surge, and did not account for sea level rise. A year ago, the CRMC adopted the Beach Special Area Management Plan (SAMP), which created new flood maps and a blueprint for resilient development.

Since 2016, buildings in coastal zones were measured at ground level, with an extra five feet of freeboard to raise them, which was not counted toward building height. The new law requires that builders measure from base flood elevation (BFE), and allows them to use the more extreme BFEs calculated by the CRMC maps. Applicants using the CRMC figures choose a building design based on the structure’s life cycle, with a sea level rise and storm surge estimate and an accelerated erosion multiplier. The commission would then recommend resilient building techniques.

Four towns — Narragansett, South Kingstown, Charlestown and Middletown — immediately passed ordinances to blunt the impact of the new law. Narragansett restricted homes in low-lying areas with high BFEs to a single story. Charlestown changed its height calculations to subtract the existing grade from the BFE so a house built at a grade that is five feet above sea level, with a BFE of ten feet, would have to raise the first floor by five feet, for example.

Middletown amended its ordinances governing building height in the compact but dense commercial district next to Newport’s First Beach because “for that area of town, the law was going in the opposite direction of what the town wanted to see,” says Ronald M. Wolanski, town planning and economic development director. “We wanted to maintain a smaller scale of development.”

The state, via the Rhode Island Infrastructure Bank, is also trying to aid coastal communities with planning assistance and money from the 2018 Green Economy and Clean Water Bond. The Resilient Rhody municipal resilience program requires cities and towns to identify projects to increase their resilience to climate change. The state’s first round of money was awarded to three communities to jumpstart water pollution abatement projects. Shaun O’Rourke, the bank’s director of stormwater and resiliency, says the program will offer low-interest bridge loans to accelerate implementation.

“There’s a whole slew of things we need to talk about besides elevation,” says South Kingstown Planning Director Chelsea Siefert. Serious issues include access to roads, septic systems and potable water. “We can’t just say elevate and everything is good and there’s no mechanism to
require retreat from the most vulnerable areas. If we wait for everything to be taken out by a storm then we have another set of circumstances to deal with regarding our tax base.”

“Everybody is so attracted to the Westerly shoreline. It’s a huge economic driver for the town,” says Westerly’s Director of Development Services Lisa Pellegrini. “When you think about sea level rise, the best thing you can do is anticipate what can happen, mitigate the best you can and prepare for the worst. It’s a balance. But I don’t think climate change will prevent people from wanting to live and work and play by the shore.”

Earlier this year, the Watch Hill Conservancy held its own resilience community forum to contemplate its survival. With just one foot of sea level rise, the number of nuisance flooding events will rise from five to seventy-seven days of two feet of water above normal high tides; and from twenty-three to 195 days of one-and-a-half feet of water above the high tide.

Already, extra-high tides steal parking spaces, customers and sales from Bay Street merchants. The yacht club sits high and dry but, to get there, as one member put it, “‘Be prepared to take off your shoes, roll up your pants and get wet,’ ” August recalls. “This is not the future. This is now.”