Learn how to make a Rueben sandwich, laugh it off at the Comedy Connection and other fun things to do in Rhode Island from March 4-10. 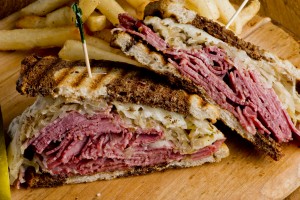 Tune in to the first event of the Museum of Work and Culture’s month-long Francophone celebration. Purchase tickets to stream the French Canadian dark comedy “Merci Pour Tout,” a tale of two estranged sisters who embark on a journey together after a family tragedy. The film will be available beginning March 4 and can be watched all month long. Once purchased, it can be streamed for a seventy-two-hour period.

Swing by Comedy Connection for a night of laughs. Punkie Johnson is a comedian hailing from New Orleans and a new cast member on “Saturday Night Live.” She played a role in the Netflix comedy series “Space Force” and has been on numerous Comedy Central shows, including “Bill Burr Presents: The Ringers.” Enjoy drinks and food as you laugh the night away at this stand-up comedy show.

If you’re planning to say your vows in 2021, be sure to attend this boutique bridal expo at the Wayfinder Hotel in downtown Newport. Meet with entertainment services to liven up your wedding celebration, speak with photographers skilled in memorializing the special moments and check out beautiful gowns as well as makeup and hair stylists sure to make you look fabulous on your big day.

Stream the final lecture in the Linden Place Mansion’s three part lecture series on African-American Art of the Twentieth Century. This last talk will discuss the ways in which music influenced the work of two great artists. Romaire Bearden is an accomplished collagist whose impressive and expansive body of work focused on Black culture. The New York-based artist Jean-Michel Basquiat created pieces that served as social commentary and gained recognition early in life. Pre-register for this lecture to learn more about the work and lives of these impressive artists and how music influenced their work.

Join the Irish folk at McBride’s Pub or tune into Zoom for a St. Patrick’s Day-themed live cooking event. If you opt for a seat at the restaurant, drink a Guinness as you watch the demonstration. If you’re at home, follow along as the cooks show how to make a Rueben sandwich and as the bartenders mix signature drinks. Funds raised from this event will be donated to Operation Stand Down, an organization that supports veterans and their families.

Want more fun things to do? Check out our calendar listings.