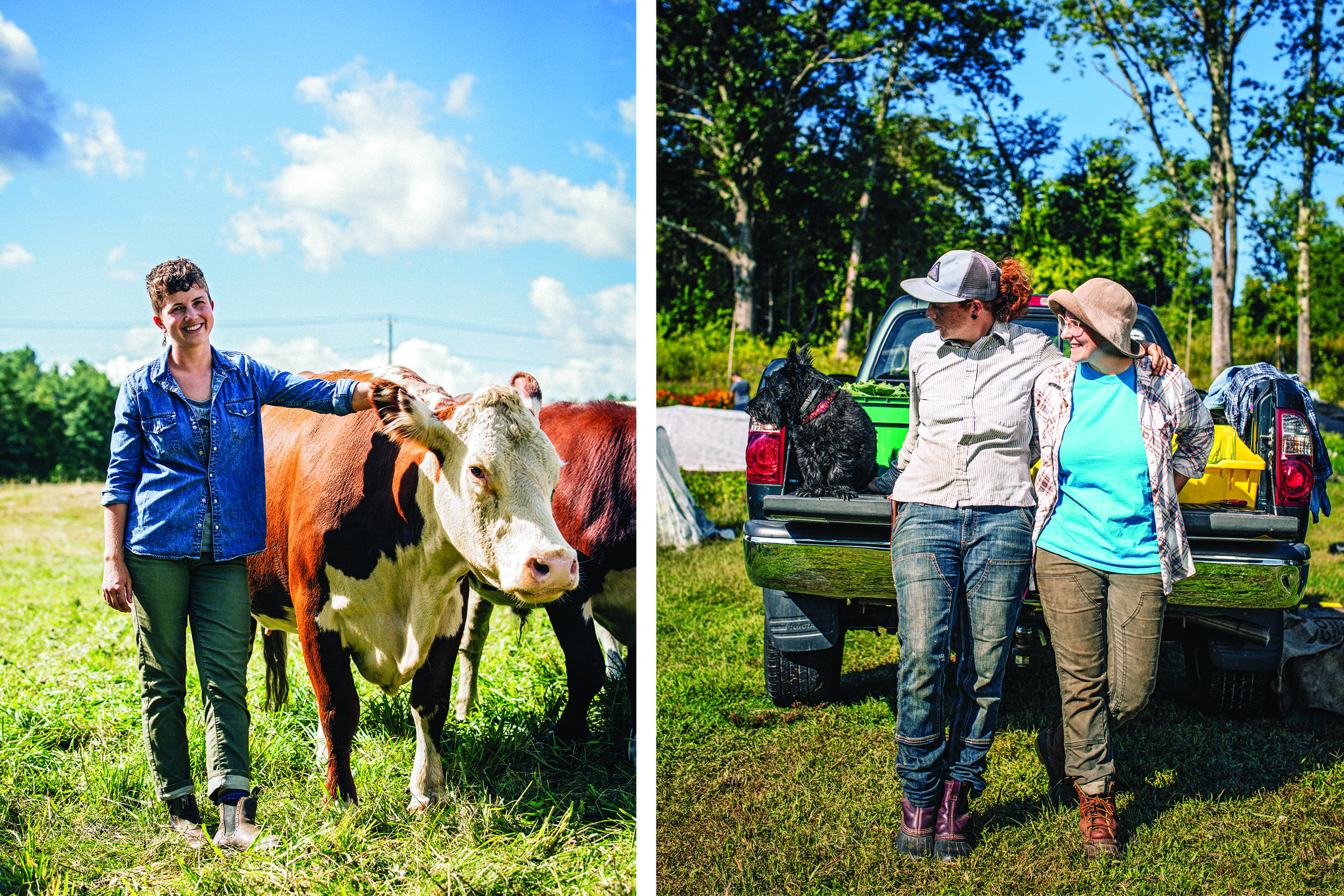 Inside a tiny room stocked with freezers in a barn at Deep Roots Farm in Chepachet, thirty-year-old new farmer Katie Steere rings up a credit card purchase for sausages, steak and ground beef on her cracked-screen iPad. She’ll later repost the customer’s social media photos on her own Instagram — views of the sprawling farmland, a centuries-old barn and sausage sizzling on the grill with corn — to share with her followers about how the livestock lovingly and humanely raised on her farm became a healthy meal for a hungry family of four.

Farming is on the rise in Rhode Island, which 1,240 farms call home. Not only has the Ocean State seen a 42 percent increase in the number of farms since 2002, but it’s also second in the nation for direct retail sales, which means selling directly to the public through venues like farmers markets, farm stores, restaurants and institutions.

Local organizations such as the Young Farmer Network support new farmers like Steere with monthly meetings, resources and demonstrations (and potluck dinners), while Farm Fresh Rhode Island connects them to the public through farmers markets and the Market Mobile. Rhode Island’s Local Agriculture and Seafood Act (LASA) grants also add some financial support to those who are developing programs. Rhode Island is doing its part to keep farms in the state by facilitating land linking between existing farmland and new farmers who can’t afford to buy it, but want to lease it, and the Farmland Protection program is saving farmland from future development. There’s also a greater chance for small-scale farmers to make it work in Rhode Island by adopting modern methods to market their businesses.

“Farms tend to be smaller and there’s much more capacity to make a living on small acreages than there used to be,” says Ken Ayars, chief of agriculture at the Rhode Island Department of Environmental Management (DEM). “You can direct market and make a living off a farm that’s two to four acres in the state, and that wasn’t necessarily the case thirty or forty years ago.”

It’s not easy, but it can be done, as proven by some of the local farms we feature in this story, from one that operates through a community supported agriculture (CSA) model and restaurant connections to another that makes the bulk of its business from its on-site farm store and farmers markets. One sophisticated agricultural operation started small selling at farmers markets and local restaurants, and is now packaging and distributing their products across the region to retail giants like Whole Foods, while another laboratory-turned-farm is aiming to convert its crops into the world’s next superfood.

The state’s forty to fifty farmers markets make it easier to buy local, including New England’s largest winter farmers market managed by Farm Fresh Rhode Island at Hope Artiste Village in Pawtucket. The state is also connecting more local large institutions to our farms and fishermen for purchasing their products through an initiative called Supply RI in partnership with Rhode Island Commerce Corporation.

“They are working with about thirteen of our largest employers in the state — folks like Roger Williams, Brown, RISD — who’ve committed to increasing their local procurement,” says Sue AnderBois, Rhode Island’s director of food strategy, who is in charge of the state’s food plan called Relish Rhody. “Commerce worked with a team that did an initial study of a few of the anchors, looking at where they do their purchasing, and if they shifted just a small percentage to Rhode Island, the impact that it could have here.”

Farms are developing their own marketing strategies by adopting social media platforms such as Facebook, Twitter and Instagram to gain new customers. Others are using online systems for payments through mobile phones and iPads. There’s even a new app called WhatsGood that allows shoppers to choose what they want to purchase from local farms and food producers through the app, and then they can pay in advance and pick it up at listed sites such as farmers markets, farm stores or breweries or have their order delivered to their door.

While Rhode Island may have the most expensive farmland in the country, Rhode Island DEM is taking steps to help new farmers access that land more easily, even if they don’t have the capital to purchase it. DEM owns two working farms, Urban Edge Farm and Snake Den Farm, that it leases out to nonprofits, including the Southside Community Land Trust and the Northern Rhode Island Conservation District, which in turn sublease to farmers who don’t have access to land.

“The ultimate goal as a farmer is to build their business here and stay here, so they don’t have to go to some other state for the sake of cheaper land,” says Ayars. “The land linking program is a bit like a dating service, in a sense that you are trying to match land owners to farm seekers through a web portal that currently exists of seventy to eighty people.”

The number of farms in the state may be on the rise, but we are still losing some private farmland to real estate development, even with the Farmland Protection Program in place. “Our farms over history tended to develop along the coast, because water was a means of transport. Water also moderated the climate influence of a hard winter,” Ayars says. “Farmland often developed in a ring around Narragansett Bay, and if you look at it now, what’s the value of a piece of farmland looking over the ocean or the bay?”

There’s still a lot of work that needs to be done when it comes to preserving farmland, making it more accessible to new farmers and getting more people to purchase local products. “Despite all the good things happening in Rhode Island and New England in general, we’re still estimating that we produce probably only about 10 percent of the food we eat,” Ayars says. “Our goal is to have a more local, sustainable food system, and we’re on that pathway.” Here are some local farms that are adapting to modern times:

To get to Deep Roots Farm in Chepachet, drive down Putnam Pike past Sticks Tavern and the Gentleman Farmer diner. Resist the urge to stop for a drink, keep going, and soon a welcoming wooden sign reveals the livestock farm’s location down a half-mile-long bumpy dirt road canopied by tall trees and framed by grassy, hilly terrain where cows graze.

Katie Steere is a thirty-year-old farmer who revived her family’s seventy-acre Steere Farm two years ago after the land sat silent since 1977. The farm was founded in 1776, when her ancestors settled here from Surrey, England. The farm’s saw mill first generated electricity for Chepachet using its water power, lighting the first bulb at the Brown and Hopkins Country Store. Many of the town’s historic homes are made with wood that was milled here. The farm was a former dairy that produced both sweet corn and eggs, while her uncle’s property, also located on the land, raised turkeys.

It’s an unlikely path for a former vegan who left a career in commercial banking in Silicon Valley. Steere — who sports a stylish pixie cut, dangling stone earrings and a T-shirt that reads: “Buy Food Grown Here” — lived her college years as a vegan after reading a book about the industrial food system.

“I became the most judgmental, righteous vegan on earth,” she says, but the final straw for her was when her hair started falling out after adopting the diet. “I started eating meat again, and I learned about the food system and that animals really are beneficial when they are managed correctly to the environment.”

After college, she pursued commercial banking for five years, but felt she was drifting through life. She gave notice at her job the day after watching a TED Talk that inspired her to find her passion. She left her gray cubicle to hike the Pacific Crest Trail and do some thinking. Then she applied for an internship at Polyface Farm in Virginia — the famous livestock farm featured in Michael Pollan’s book The Omnivore’s Dilemma, and the subsequent documentary Food, Inc. — where she learned practices to resuscitate her family’s former business.