Matthew King handmakes tortillas and bakes them on his Italian-made wood-fired oven. 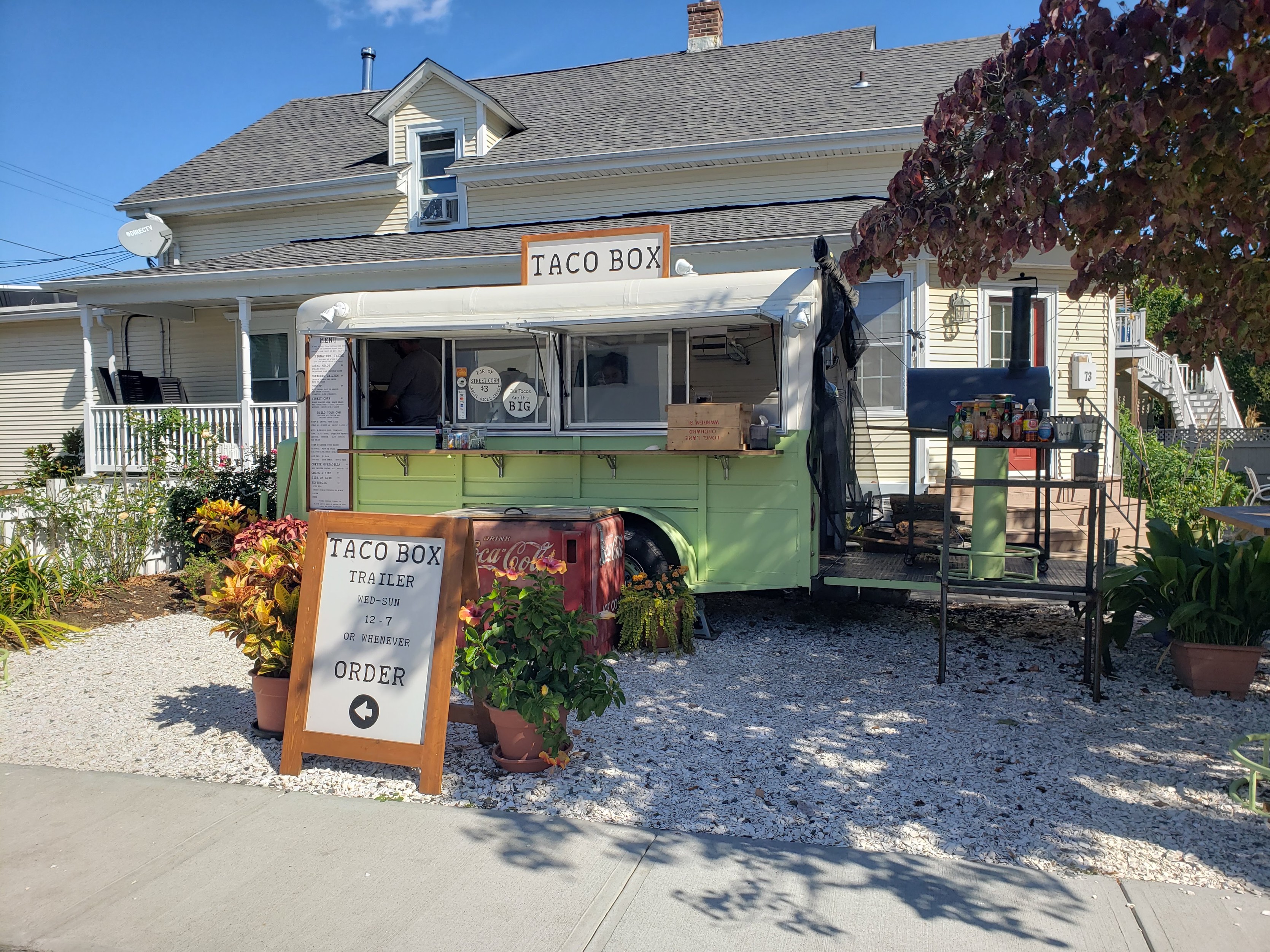 It’s not a pizza. It’s not a traditional taco. It’s a pizza taco! The Taco Box in Warren, Rhode Island, is a vintage former horse trailer turned into a retrofitted food vendor. It’s tricked out with a removable wood-burning oven that bakes handmade tortillas mixed with a secret ratio of flour and corn – shaped like pizza dough – and topped with a choice of steak, shrimp, shredded chicken or street corn. The charming green and white trailer is surrounded by a beautiful garden and picnic tables, located adjacent to the East Bay Bike Path in downtown Warren, conveniently next to the Del’s Lemonade stand.

The Taco Box owner Matthew King originally intended to sling pizzas on his Italian-made wood-burning oven, but his girlfriend convinced him that tacos were the way to go. “I said I don’t really have the street cred to do tacos per se but let’s do something to distinguish us from everyone else, and essentially what you have is a hybrid of two concepts, let’s say a Neapolitan pizza in a wood-fired oven and a taco,” says King. “There’s this ongoing debate in the Taco Box community, both with the customers and the staff, is it a taco or is it a pizza? At the end of the day, the conclusion is, ‘Does it taste good?’ And the answer always is yes.” 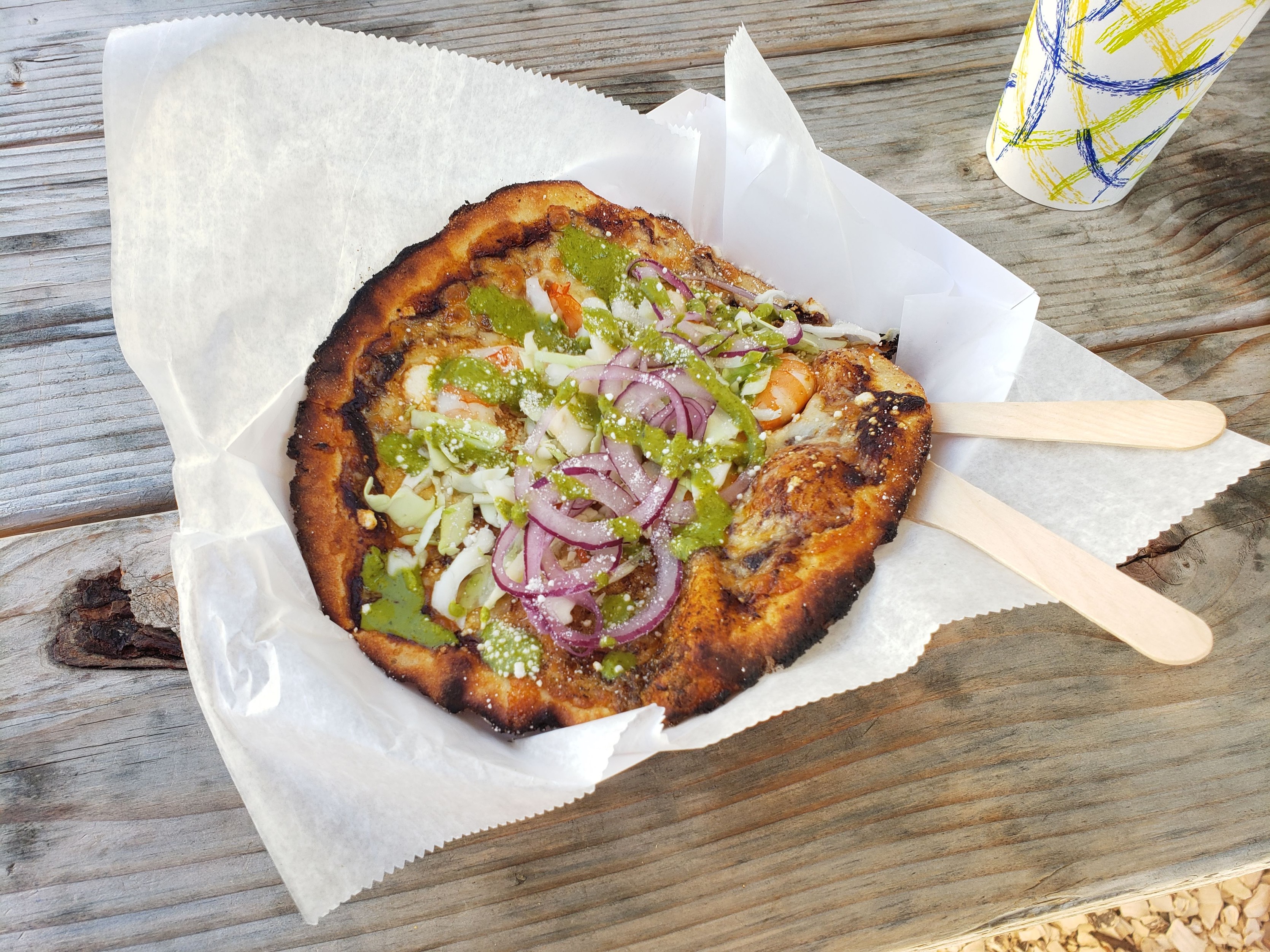 A shrimp taco from the Taco Box.

King wears a T-shirt that his girlfriend made that says “Inhale Tacos,” and on a calm Wednesday afternoon, he explains the Taco Box concept personally to guests and checks in with his single employee to make sure the tacos and street corn are being made to his specifications while he conducts an interview. He runs an environmentally conscious business with wooden, compostable utensils, paper straws, cups and bags, and limited plastic.

There are four different tacos on the menu, plus a build-your-own option served with signature “adobo” sauce. “Carne Asado” includes grilled steak, Salvadorian slaw and chipotle sauce; shredded chicken involves lettuce, tomato, red onion and pico de gallo; shrimp includes wild-caught shrimp from the Gulf of Mexico, plus red onion, cabbage, cilantro and lime vinagreta; Street Corn is grilled in the wood-burning oven and topped with black beans, red, green, sweet and chili peppers, avocado and green chili sauce plus a sprinkling of Tajin chili powder. The Taco Box also offers quesadillas, chips and pico from Warren-based business Tito’s and sides of guacamole. There also might be specials every now and then when chef wants to have a little fun.

King has an impressive culinary background having graduated from the Culinary Institute of America in Hyde Park, New York. He previously worked for a major contract food service facility focused on the leisure and entertainment segment, and after thirty-five years of working for someone else, he ultimately wanted to be his own boss. His goal is to develop food trailers that can convert to multiple concepts. The Taco Box trailer has a removable magnetic menu board and the restaurant name is also replaceable, so the adaptable trailer could quickly morph into a different vendor. “I was always intrigued by the food truck concept but not necessarily limiting myself to one concept,” King says. “My objective is to develop a fleet of multiple concepts.” 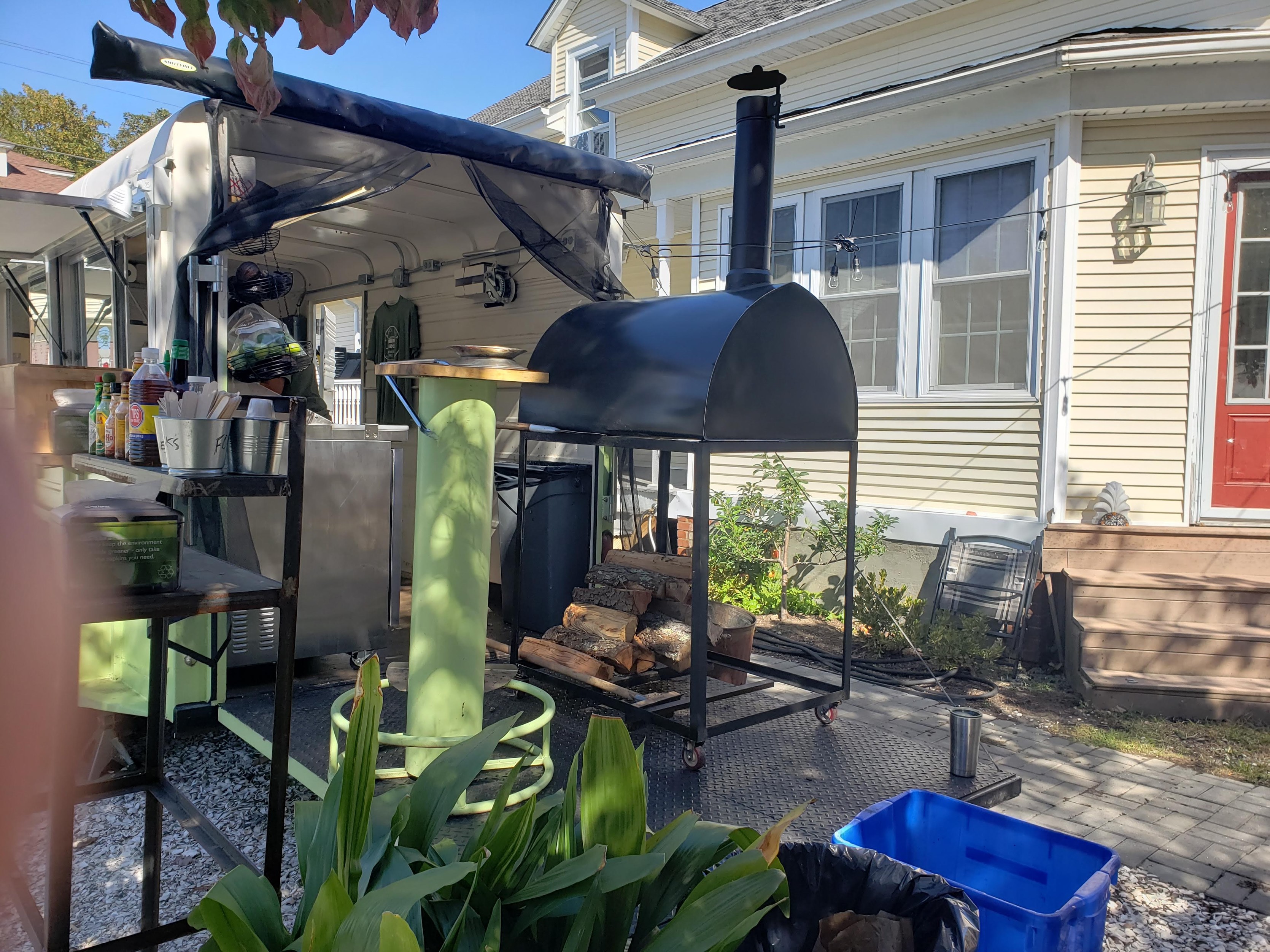 The wood-fired oven at the Taco Box trailer.

King handmakes the tortillas himself down the street at his commissary, Hope and Main, where he prepares all the ingredients for service. The tacos are finished at the trailer. Once they’re baked on the wood-burning oven, there’s a slight char on the crisp outside edges, but the tortillas are soft on the inside. The tacos themselves are bigger than the size of a dinner plate – one will do for most people. The staff has a cautionary conversation with those who wish to order more than one, saying ‘You have a friend, right?’ Meat, veggies and housemade sauces are piled on; some of the ingredients, like peppers and tomatoes in sauces might have come straight from King’s kitchen garden.

When assembled, these are not your average tacos. They are a whole new category. “The other day a customer came and said, ‘How do you eat this?’ And I said, ‘Fold it in half and shove it in your mouth,’” he says.

Where the trailer is located now was once King’s front lawn. He may have the shortest commute in all of Rhode Island. He relocated his plants with the help of his mother who is an expert gardener, and they created an outdoor oasis for his mobile restaurant. He’s seeing customers stop by straight from the bike path, and from area businesses including storefronts, the nearby post office, the Cutler Mills and the firehouse. And he’s loving the fact that he’s helping to extend the small business footprint of Warren, while working for himself. “I am the man now instead of working for the man, for better or worse,” he says.

Sorry, no Taco Tuesday, but every day is a good day for tacos.

The Taco Box is open Wednesday through Saturday from noon to 7 p.m., and noon to 8 p.m. on Sunday through October. Follow on Facebook for updates. 75 Child St., Warren, tacoboxtrailer.com 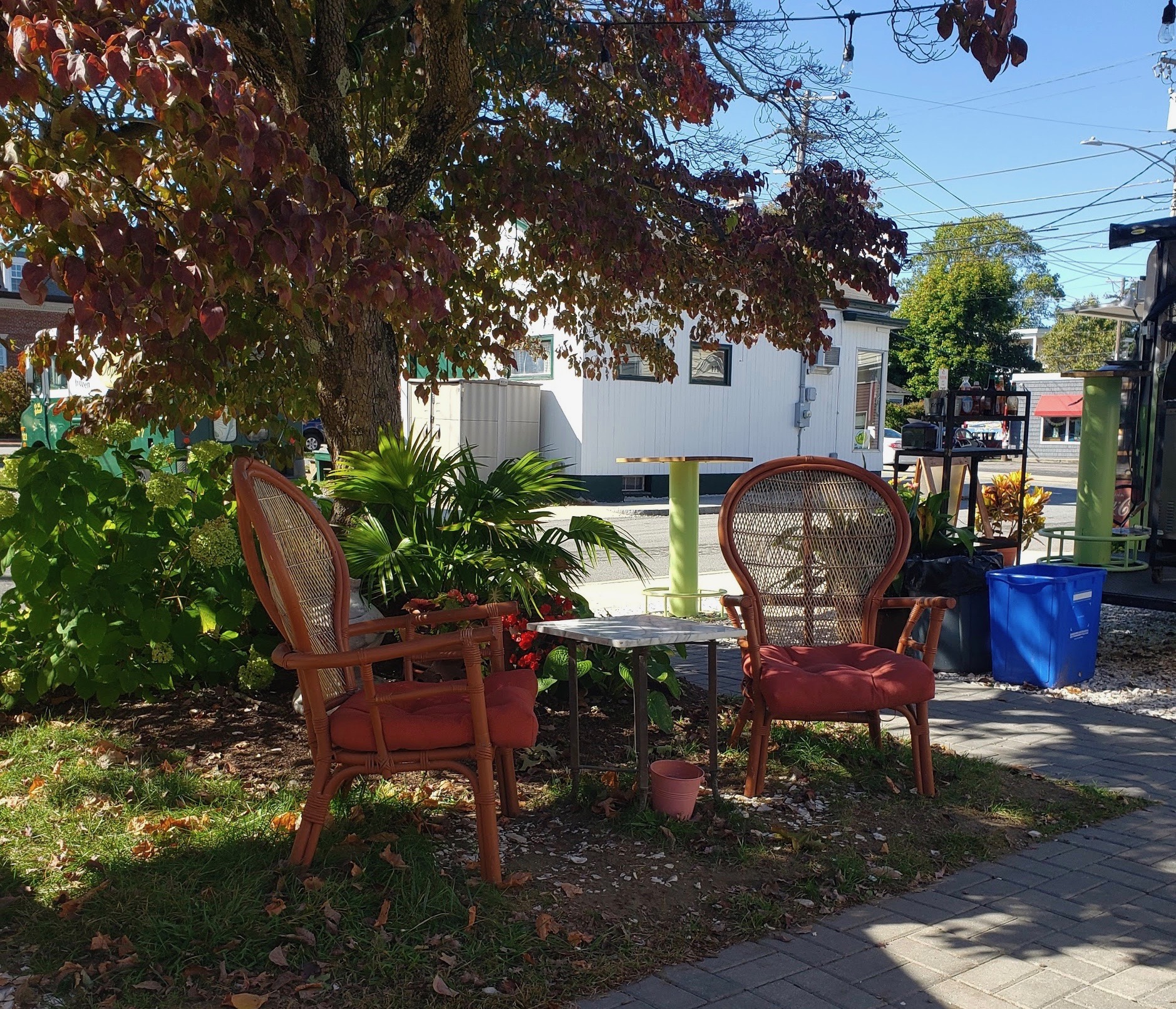 Cozy outdoor seating at the Taco Box in Warren.