The eight-seat bar by Joanne Chang is a place for great conversation and cocktails. 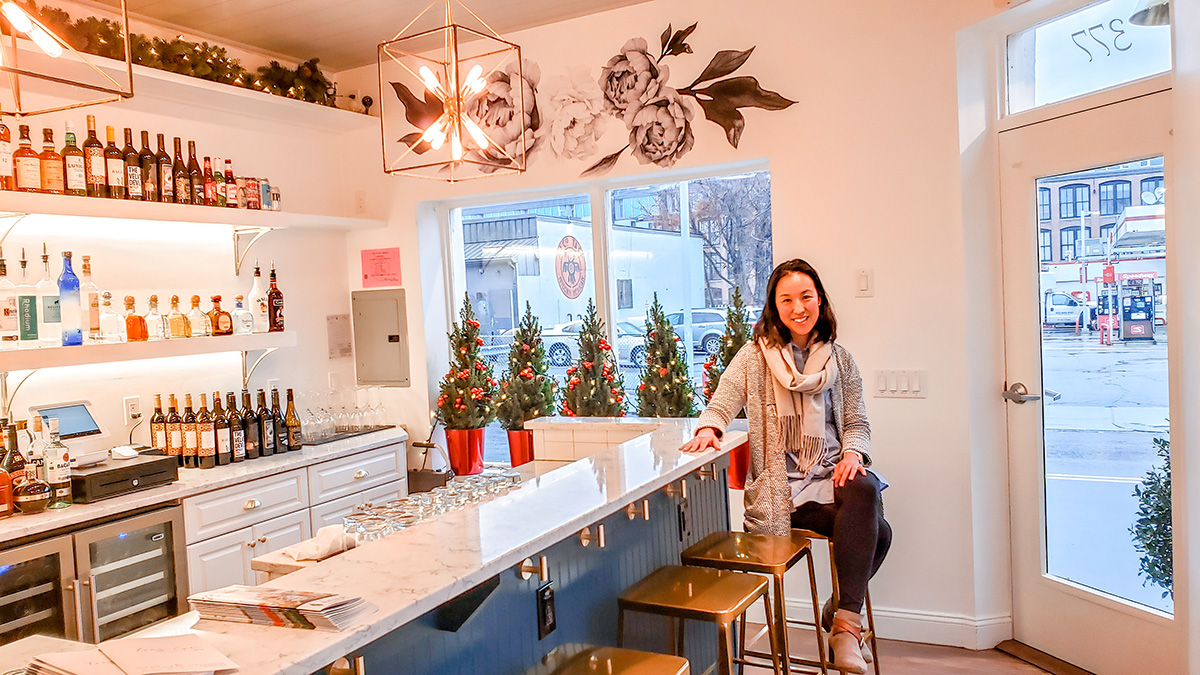 Tiny Bar is the latest bar to open in Providence, and it’s dainty and darling. The bar is located inside a small building by Olga’s Cup and Saucer in the Jewelry District, which will soon be transformed into Seven Stars Bakery’s fifth location. Owner Joanne Chang decided to lease the Olga’s location to Seven Stars, but will keep running Tiny Bar. It has only eight seats along the bar, but it’s a place where grownups can be grownups. By summer, the bar will extend out onto the shared patio so you can sip drinks in the sun.

Originally, Chang was deciding whether to close Olga’s temporarily and renovate it, but then she crunched the numbers and says it didn’t make sense. Olga’s began as a bread business launched in 1988 by Olga Bravo and Becky Wagner, who sold the business to Chang in 2017. Chang resolves to continue running Tiny Bar, and put the Olga’s building in good hands. “Tiny Bar is my baby,” she says. Olga’s will close after Christmas Eve, and the location will be leased to Seven Stars by Chang. 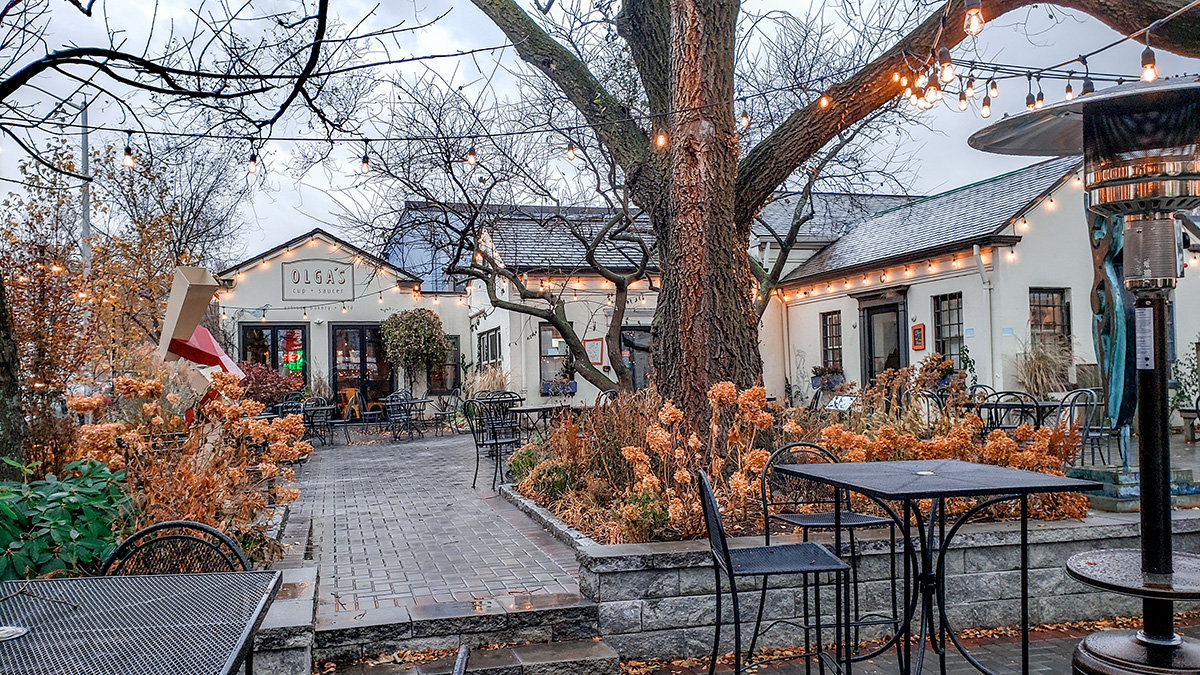 Olga’s will close permanently on Christmas Eve, and be transformed into a Seven Stars location in 2020.

Chang opened Tiny Bar after trying to brainstorm a good use for the property. “I wanted to create a place where I would like to go, and that I thought would be fun and where you could be a grown up,” she says.

At first, she thought a grab-and-go counter might be a good fit for the building, but then her mind turned to transforming the space into the coziest, light and airy bar where people can have good conversations and good drinks. It feels like pulling up to the kitchen counter at your best friend’s place, ready to unload a week’s worth of pressure. 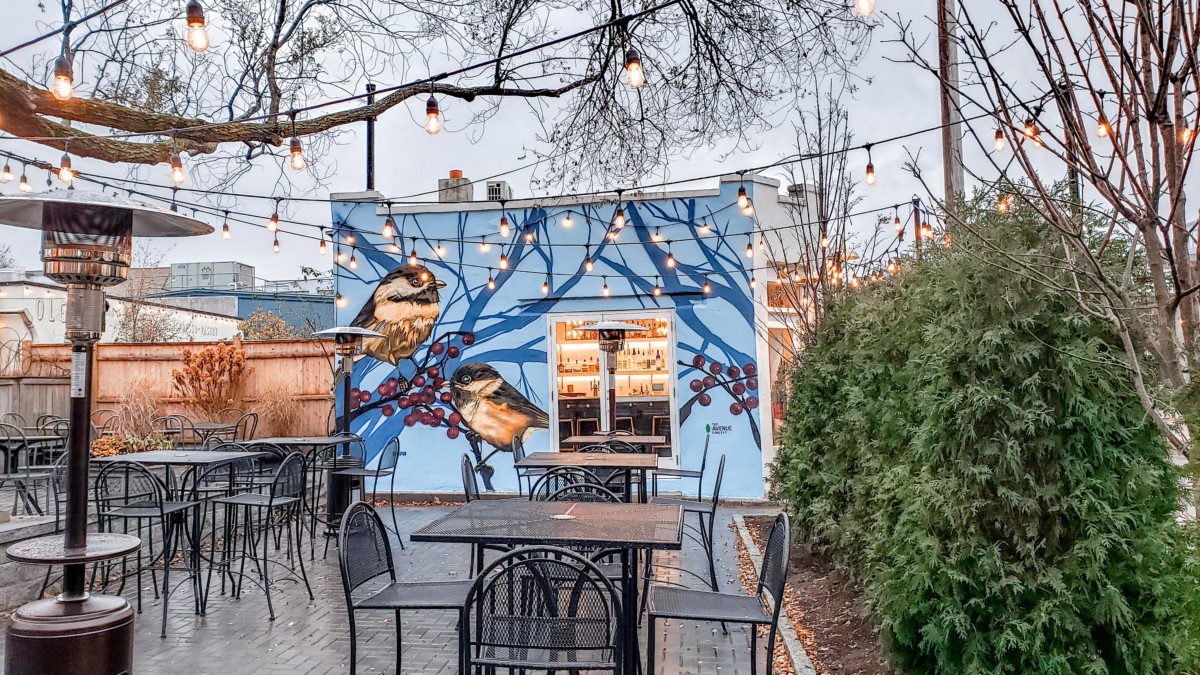 The patio outside Tiny Bar.

“We knew we wanted it to be different from what was already on the market,” Chang says. “I feel like the Eddy, Far West and the East End do a great job with the dark, more masculine vibes. Bars are 90 percent about the vibe. I wanted this bar to be airy and feminine, with a clean and light-filled design.”

Of course, it would have been ideal if Tiny Bar could have opened in the summer with its complementary outdoor seating on the stone patio shaded by trees. But in small business, things always take much longer than expected. Chang purchased Olga’s Cup and Saucer in December 2017, and wanted to finish the patio first, which was completed last spring. Tinybar finally opened last week.

The bar has a short menu with classic cocktails with a twist, plus nice wines by the glass and beer. For now, Tiny Bar is offering pastries, cookies and brownies from Olga’s, but soon they’ll launch more robust snacking options.

The detail in the space is key. There’s a beautiful yellow finch mural on the outside of the tiny building, commissioned by the Avenue Concept, which will change every four months. “It’s a rotating mural. I like the fact that it’s being refreshed. It’s kind of cool because I don’t control that,” Chang says. “The Avenue Concept takes the lead on sourcing the artist, finding the artwork, making sure it’s prepped and taking care of it.”

Right now, Kevin Berglund, formerly of the Red Fez, is on the bar, serving drinks named “the Drifter,” with Japanese whiskey, vermouth, amaro and bitters, and the “Autumn Mule” with Gentleman Jack infused with autumn spices, apple puree, fresh lime juice and topped with ginger beer. So sidle up to the bar for a therapy sesh with your best friend. This bar is made for catching up over cocktails. 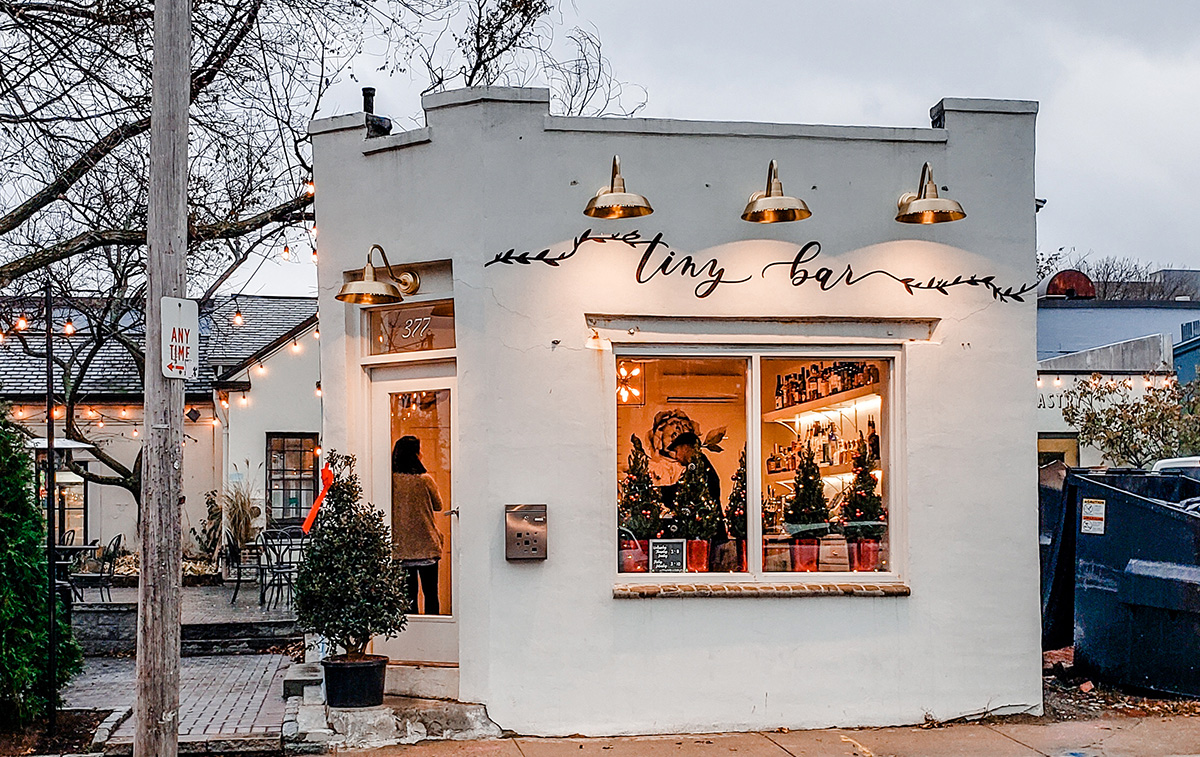 The adorable exterior of Tinybar.