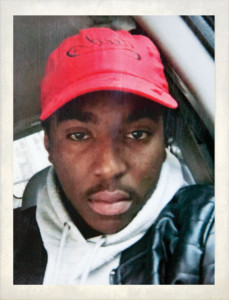 In January, Burney-Speaks puts out a call on Facebook for someone to step up. Something needs to change.

“All that stuff happening in January really, really broke my heart. It was a lot,” she says, referring to the so-called “hot zone” of violence that left two people dead.

Local church groups reach out, asking how they could help. Before long, Burney-Speaks is leading an assemblage of believers looking to protect their city the best way they knew how.

She meets with pastors from several churches. They develop a plan for the first Corporate Prayer in February, when parishioners enter into prayer at the same time in venues across the city. More Corporate Prayers are planned for the first Monday of each month, and local Catholic churches have expressed interest in participating, Burney-Speaks says.

“We’re just looking for god to cover our city and subside the violence,” she says. “There are too many of them dying.”

On the night of the first Corporate Prayer, on February 5, Burney-Speaks offers a welcome speech at House of Manna Ministries, a Pentecostal church on the North End. She talks a little about Devin, but says afterwards that she kept it short because she didn’t want to get too emotional. Instead, she focuses on a need for direction for the youth in the city, and for parents to play a bigger role in the lives of young teens.

“The mothers are hurting. They’re scorned, they’re broken, their bitter,” she tells a crowd of black parishioners ranging from toddlers in their mothers’ laps to the elderly.

Also in attendance is Mayor Elorza, along with a few members of his team. When the corporate prayer begins at 7:30 on the dot, he stands and prays. A church elder, Joyce Black, guides the group in its call for a ceasefire.

We pray right now father, that everything will cease, oh god, in the mighty name of Jesus.

We call out peace to this city, god, in the mighty name of Jesus.

We call out salvation right now, god, in the mighty name of Jesus.

Some people sway as they pray, some stand stock-still. Some, like Burney-Speaks in the front row, lift their hands in the air. Some clap.

We ask you right now, father, that you begin to raise up, oh god, raise up these young men, oh god, in the mighty name of Jesus.

They are not cast-outs, oh god.

They are not, oh god, statistics, right now.

The prayers of parishioners swell together, louder than before. And there are more of them beyond these four walls, standing and shouting in churches in warring neighborhoods, from the North End to the South Side. Together, they call for a miracle with all their might: May Divine Providence, bolstered by family, community, advocacy and police, prevent another son from dying in the street.

The city shall not be the same.

It cannot be the same.

It shall not be the same.