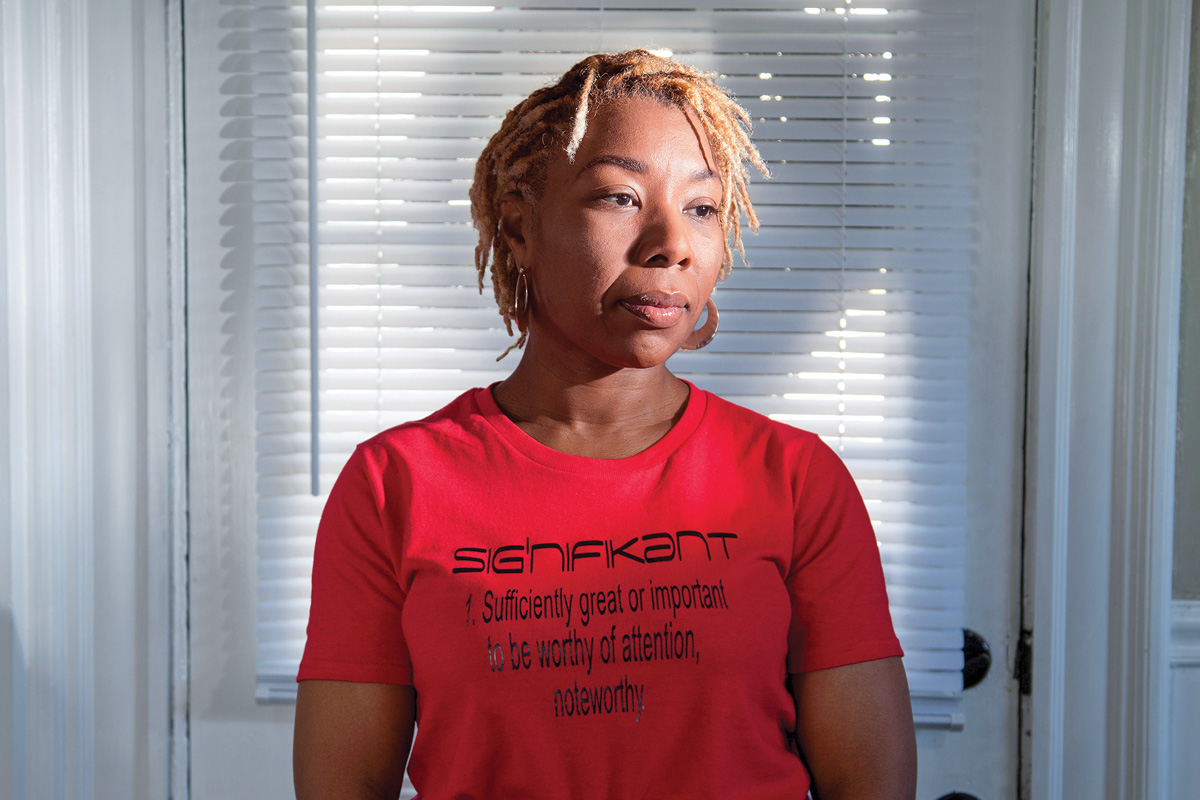 Shawndell Burney-Speaks in her home wearing a T-shirt she designed with help from her son, Devin, who was killed outside of a club last July. Photography by Dana Smith.

I know she’d rather hear I’m locked up/Than find out that I died. That’s why I’d rather get caught with it/than without it by my side.

On April 25, 2017, rapper and alleged C-Block gang member, John Minaya, a.k.a. Good Money, published a music video, “Don’t Cry,” on YouTube. The song is about his relationship with his mother, but Minaya also raps about “riding through the city with a Glock 9,” home invasions and extortion.

Two months later, after the shots rang out that killed Devin Burney, police observed twenty-three-year-old Minaya and another man fleeing Corinth Street in a gray Infiniti. Two members of Providence Police Department’s violent crime task force pursued the car, and it crashed off an embankment at Juanita Sanchez High School. Minaya tried to run, but the officers caught him. A stolen nine-millimeter handgun was found in the vehicle.

Minaya was arrested on the gun charge.

But — to the dismay of the community — he was set free after a bondsman posted his $100,000 surety bail. According to police, the other man in the car that night, a “person of interest” whose name has not been released, is not in custody.

Minaya, who has done time for gun, robbery and conspiracy convictions, skipped his hearing on the gun charge and laid low. Police nabbed him a month and a half later. He was leaving a recording studio near Roger Williams Park, less than a mile from Praise Tabernacle Church where Devin’s funeral took place.

According to police records, Minaya hid in the cab of a friend’s pickup truck. When officers pulled the truck over, Minaya again tried to run and was captured. He’s been in prison ever since and pleaded not guilty to charges of first-degree murder, discharging a firearm when committing a crime of violence, discharging a firearm from a vehicle, felony assault, carrying a gun without a license and conspiracy.

In “Don’t Cry,” a high-quality production with more than 18,000 views on YouTube, Minaya raps about his father, who was murdered when he was five. The elder Minaya was gunned down in broad daylight outside of a Dairy Queen on Providence’s West Side. He also raps: “A woman can’t teach a man how to be a man.”

Shawndell Burney-Speaks broaches the same subject in a TEDxProvidence talk in October called “The Village, Where Are You?” She was invited to give a talk last-minute, with only a few weeks to prepare. In a black and white striped dress, she covers the absence of community in urban neighborhoods, declining programs for city kids and mass incarceration.

Later, Burney-Speaks says of the talk, “People who know me hear me; they’ve been hearing me for twenty years. But I was looking to let people — different people — know, this is where we live and this is what’s going on. Just to kind of wake people up. You can turn a blind eye, but this is the reality of what’s taking place.”

Sitting on a sofa in her home, a lovely blue Cape in Cranston, Burney-Speaks reiterates her opinion on single motherhood and the need for stable father figures in sons’ lives.

“I didn’t have men around Devin like that, so there was a huge gap in what he could relate to,” she says. “He needed somebody.”

The closest thing Devin had to a real dad was his sister’s biological father. But, per the urging of a girlfriend, he stopped responding to Devin’s calls and messages when he was fifteen. Burney-Speaks says Devin used to call him the father of the year, then took to calling him deadbeat of the year. Devin’s biological father, Ronald Hopkins, was in and out of prison most of his son’s life. He was released from his latest stint, eleven-and-a-half years in the feds, the day after Devin was killed.

“I tried to get Devin a mentor so many times through [Rhode Islanders Sponsoring Education] but he never ended up with one,” she says. “I felt like, just give him a guy. He could talk to anybody. He was goofy.”

Burney-Speaks believes Devin wasn’t assigned a mentor because of her position in the nonviolence community and because he was a strong student. He wasn’t “at-risk” enough.

Burney-Speaks, who is a life coach, has been talking about these issues for years on social media, on panels and at conferences. In addition to drawing on her experience as a single mom, she is also informed by her work at the Institute, which included leading after-school programs with Providence middle schoolers.

Burney-Speaks recalls an interaction with a student in a program at Roger Williams Middle School, off Thurbers Avenue in lower South Providence, about a decade ago. At the time, it seemed innocuous.

“Devin used to come and visit me in his school uniform,” she says. “The kids loved him; he was so tall. But I remember this one girl coming up to me and saying: ‘That kid don’t like your son.’ ”

That kid was John Minaya.

Burney-Speaks faced him again at the indictment last August.

“It was stressful,” she says, “because his face didn’t show any remorse.”

In that moment, her phone begins to ring on her coffee table. It’s Joseph McBurney from the district attorney’s office, calling to tell her that Minaya will be arraigned the following week. Burney-Speaks thanks him and hangs up, deflated, imagining what comes next.

Devin’s girlfriend, who lived with Burney-Speaks after Devin’s murder but now is in witness protection in another state, will have to testify at the impending trial. Burney-Speaks worries about the young woman’s safety; word on the street is there have already been retaliatory shootings, and Devin’s girlfriend has received death threats on social media. The DA requested a no-contact order between Minaya and Devin’s girlfriend, which was granted by Associate Justice Kristin Rogers. A closed door pretrial conference is scheduled for April 26.

Burney-Speaks is quiet for a while, then says, “He had no business hanging with them. I tried so hard, even telling these kids: Why are you at my house? Like, don’t even be on my street. Don’t ring my doorbell. I’m threatening these guys and, for some reason, Devin felt this loyalty to them.”

“I don’t wish this on anybody, but it seems to me like the kids who do so much bad, they’re still here and they get the chance to say I’m sorry,” she says, wiping her face. “I’m glad if they get to redeem themselves. But now everyone calls and says ‘I’m sorry. I wish I would’ve told Devin, don’t hang with us.’ But it’s too late.”