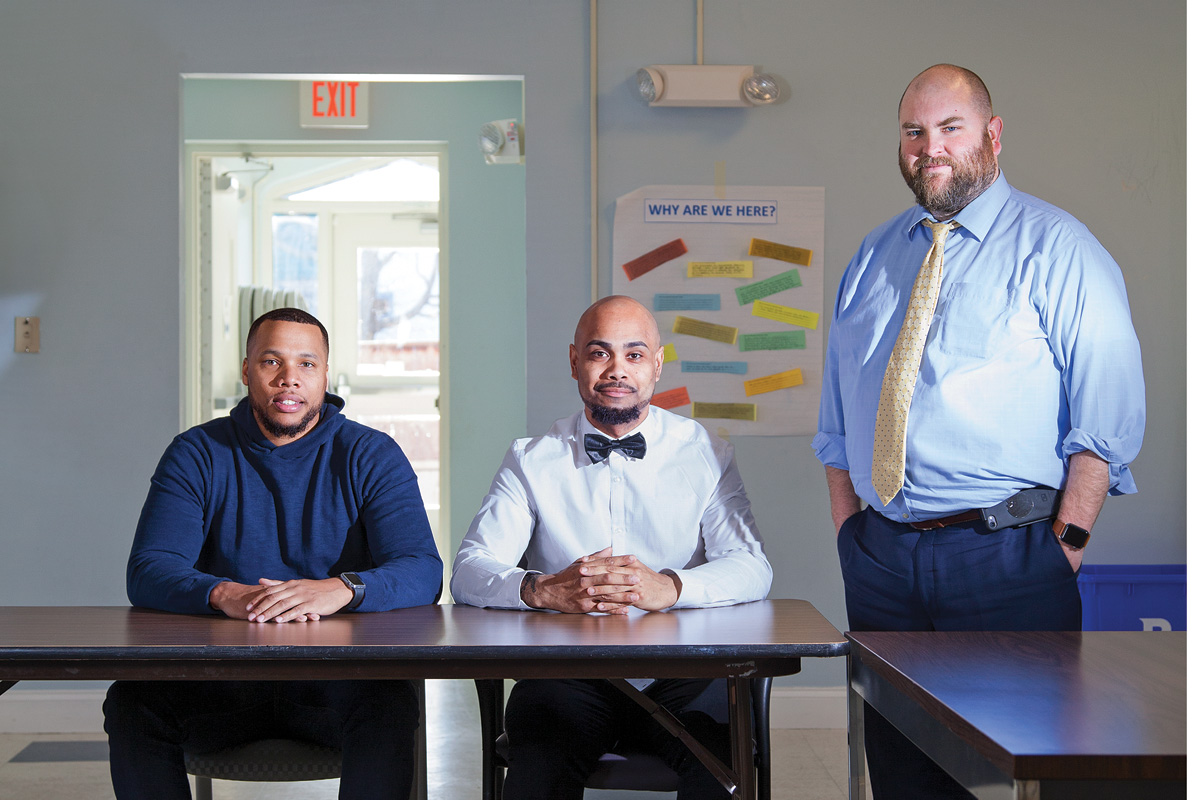 Juan Carter, Jose Rodriguez and PJ Fox of the Institute for the Study and Practice of Nonviolence. Photography by Dana Smith.

The Institute for the Study and Practice of Nonviolence works to prevent tragedies like this: mothers standing over children lost to street violence. The nonprofit was founded by a ministry team at St. Michael’s Church in 2000 after a fifteen-year-old girl was killed in front of her house in lower South Providence. She witnessed a murder and was scheduled to testify the next day.

The city was in the midst of a good run, too. Devin’s death marked the first gang-related homicide in more than a year and a half. PJ Fox, the Institute’s executive director, credits some of this to luck; shots were fired and people were injured — some irrevocably — during that period.

Nevertheless, Devin’s death hit hard. Burney-Speaks was one of their own.

“It’s times like this when this organization feels like we’re a failure,” Fox says from his office at the Institute in lower South Providence. “Our whole existence is to prevent the shooting. I’ll never forget that night. It’s one thing to be around a mother you don’t have a personal connection to, but knowing Shawndell….”

He trails off, and repeats: “I’ll never forget that night. Her pain — everybody who was there, in terms of the doctors and the officers in the hallway, they all felt her pain.”

Burney-Speaks worked at the Institute twice: in 2003, following the murder of her brother, BJ, and again in 2008. She was hired as a streetworker, a violence intervention specialist who builds relationships with gang members and mediates conflicts.

Fox compares the work to that of a firefighter: They go from blaze to blaze, and stick around to make sure the fire doesn’t reignite. They work on the streets and in the training school and the Adult Correctional Institutions. They communicate with members of Asian, black and Hispanic gangs in neighborhoods on the West Side, the East Side, the North End and the South Side of Providence. They cover Pawtucket and Central Falls, too.

They respond to every shooting victim treated at Rhode Island Hospital. They also lead face-to-face mediations between warring gangs, both at the Institute and out-of-state — on one occasion, at a horse farm in New Hampshire. Every day, they try to convince active gang members that they can make it to age thirty, and without a life sentence. In short: They have a lot of work to do.

Jose Rodriguez, who now serves as director of victim services for the Institute, was first hired as a streetworker in 2010 and was paired up with Burney-Speaks. The funny, extroverted Rodriguez — a former gang member who grew up in the Manton Heights housing project in Olneyville and was often assigned to work in Hartford Projects, a Manton rival — was nervous.

“I was very shy and not able to speak in public,” he says, “so to have such a strong woman behind, or beside — well, actually, in front of me, because she was leading me and I was following her — was very helpful.”

Rodriguez handled Burney-Speaks’s crime victim compensation application, which helped pay for Devin’s funeral. The program is funded through court fees and is available to victims who have not been convicted of a crime in the last five years. But in 2016, Devin was charged with possession of a class IV drug with intent to deliver. He received probation, but he violated when he was caught driving with a suspended license the month before his death. Despite this, Rodriguez was able to work with Providence police and the treasurer’s office to push the application through.

Rodriguez has seen Burney-Speaks several times since, including when she dropped off three fabric squares for a quilt project for local families who lost loved ones to gun violence. Rodriguez, who says he could’ve easily ended up in jail or shot dead, is learning to quilt.