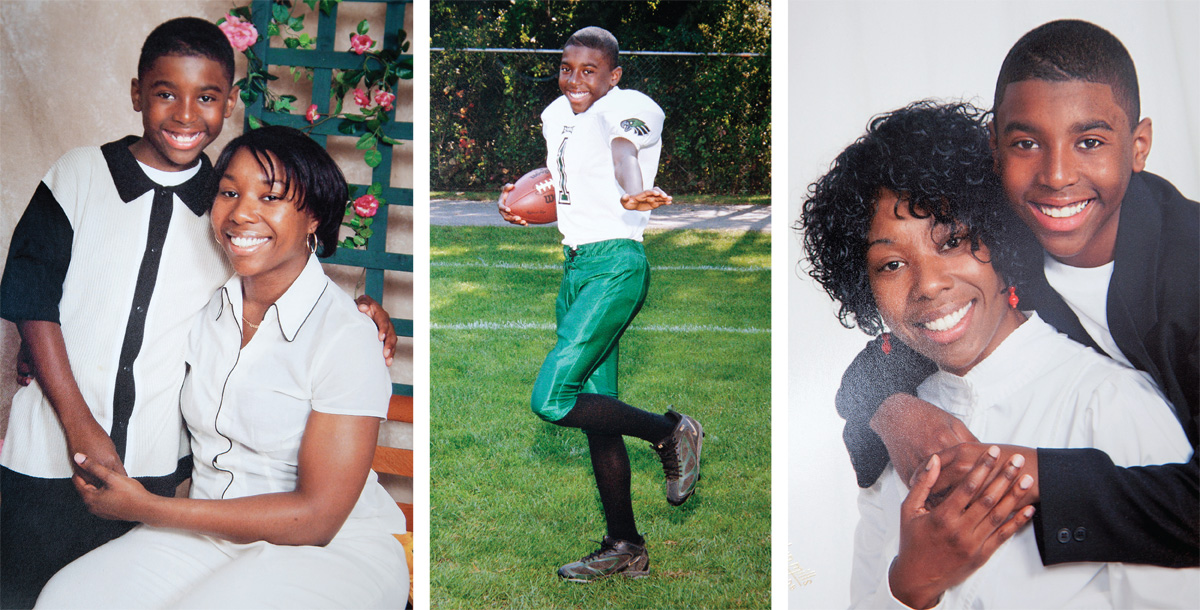 A photograph of Devin and Burney-Speaks
at Devin’s sixth-grade dance. Devin played for the Eagles pop warner football team. Mother and son pose for a family photo in 2008. Photography by Dana Smith.

Shawndell Burney-Speaks has seen too many shirts memorializing lost young men. So she lets it be known: She does not want to see her son’s face on a T-shirt at his funeral.

“We will be wearing his favorite colors, blue and white,” she writes to her followers on Facebook, adding that Devin’s high school basketball teammates will don green, white and gold — their school colors.

“Sending my baby home with class,” she writes.

That Saturday, shades of blue flood Praise Tabernacle Church in Cranston for a send-off of a community son. Spoken word, original poetry, music and prayer command attention from a small stage. Graceful women in white from Pawtucket’s Voice of Silence Ministry perform a moving praise dance to the gospel ballad, “Say Yes.”

About halfway through the dance, a young mother loses it. Sitting at her hip is a little boy — about the same age as Devin in a photograph Burney-Speaks displays by her TV at home. A funeral-goer tracks down a box of tissues, while a maternal woman swoops in to cradle the child. His eyes are wide and fixed on his mother.

Devin grew up in a house of god led by a single mother and intermittent father figures. The constant was his uncle BJ, Burney-Speaks’s brother. Devin looked like a clone of his uncle: same bright eyes and big smile. BJ was shot and killed outside of a Jewelry District nightclub when Devin was seven. Authorities determined he was not the intended target, but no one was charged with the murder.

Burney-Speaks, who says she worked hard to prevent Devin from becoming a “street kid,” knew he was in trouble when she discovered he was “jumped in” to a neighborhood gang — an initiation that involves a beating — during a sleepover with friends at his pastor’s house. Burney-Speaks didn’t want him there in the first place. She’d called, saying he’d forgotten his toothbrush so he should come home. He said he wanted to stay.

She enrolled him at Saint Raphael Academy, a Catholic high school in Pawtucket, to put some space between him and his friends in upper South Providence. But it wasn’t enough. He needed to leave Rhode Island altogether.

Burney-Speaks’s sister — whom Devin called “Auntie Ma” — and brother-in-law, who live on Long Island with their three kids, agreed to take him in. And there, far from home, he thrived.

At the funeral, his uncle, Kevin Coleman, reads a poem he wrote about life with the teenaged Devin, poking fun at his hour-long showers and the many occasions he’d crawl through a window after losing his house key.

Then Devin’s high school basketball coach, Rob Hodgson Jr., takes the stage, saying, “We are thankful for him coming to Long Island because he made each and every one of us a better person.”

Devin was a star athlete, leading his team to a class AA title championship his junior year. He ranked in the top fifty players in New York.

Behind Hodgson is a fleet of Devin’s former teammates. Some take the mic to talk about their friendship and their shock over his death. One shares how nervous he was about Devin returning to Providence after graduation, knowing his history here. While Devin, a strong student, was accepted to every State University of New York college, his aunt and uncle needed a break. So he came home.

After hearing from Devin’s teammates, Burney-Speaks approaches the stage. The pastor calls for applause.

The bereaved mother tells her fellow mourners that, not long ago, Devin said he wasn’t afraid to die — that he had his own relationship with god. Despite this, she wasn’t ready. She says she never would’ve been ready to lose him. And she has a message for the other sons of Providence in the crowd, all dressed up in blue and white for their dead friend. Her voice booms with conviction.

“No retaliation,” she says, drawing out every syllable. “Allow the police to do their job. I will not allow Devin’s life to be taken in vain. I will not allow it. Do you hear me? I love y’all. I don’t want your mother standing where I’m at. I love you too much. Love Devin enough to allow this to wake you up.”