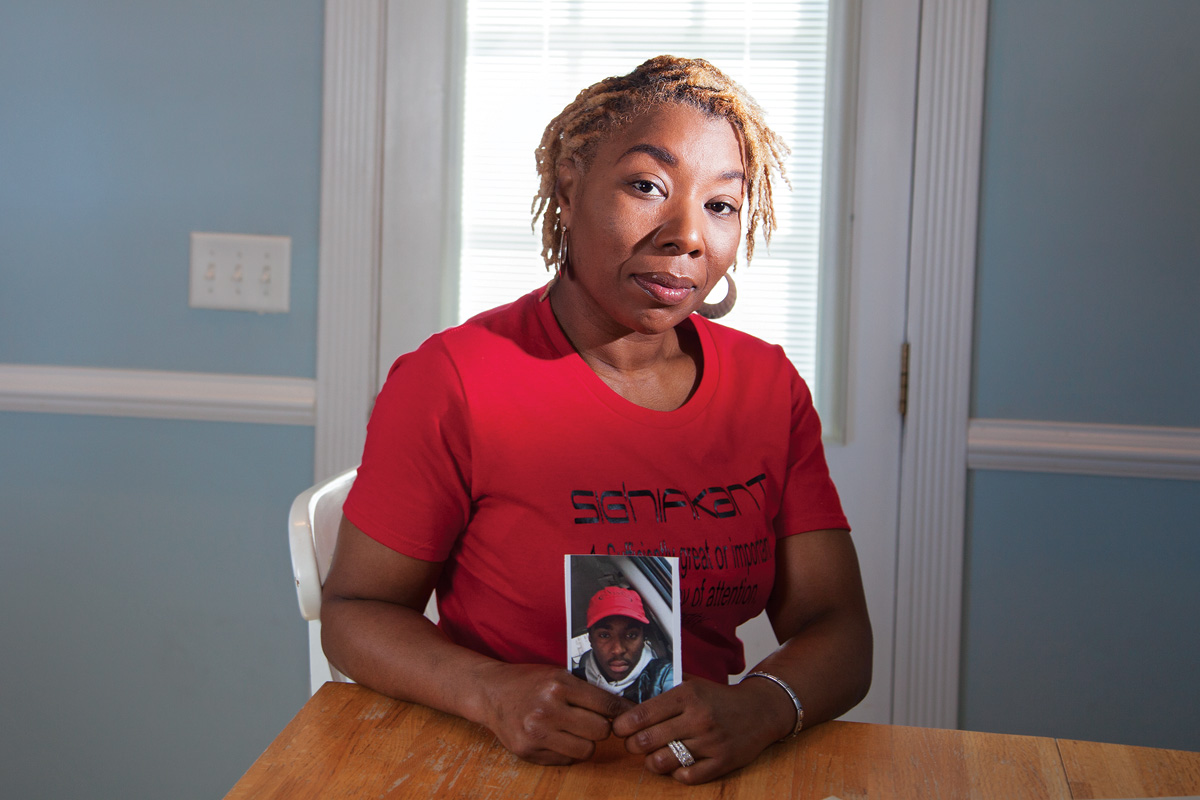 Burney-Speaks holds a recent photo of her son, Devin. Photography by Dana Smith.

It was supposed to be a quiet night.

Mothers, police, advocates: They pray for summer rain. The city’s sons stay inside. And on this Friday evening, the start of Fourth of July weekend in 2017, fat drops fell for hours.

By the time the tip from the bouncer comes in, though, the sky is clear. Three rival gangs, the dispatcher reports without urgency. Noah Lounge on Broad Street.

A fleet of officers arrives just after 1 a.m., the turret lights on their cruisers illuminating Broad Street and the adjacent Corinth. From the road, you can see young people in their Friday best leaning against floor-to-ceiling windows. Two women in miniskirts teeter across Broad, unable to gain entrance to the club. They get in their car and drive away.

Bouncers let the crowd out in a trickle. The heavy police presence, the damp pavement, the night cut short: It should’ve been enough to spare Devin Burney.

But in the shadow of Noah Lounge, with his high school sweetheart and two friends from Long Island by his side, Devin faces a slowing gray Infiniti. He shoves his girlfriend to the ground. Pops of gunfire resound.

Police round the block on foot toward Corinth Street and find the bleeding twenty-two-year-old. The Infiniti speeds away. An officer calls an ambulance.

By the time Devin’s mom, Shawndell Burney-Speaks, and her husband, Robert, arrive at Rhode Island Hospital, the entire place is on lockdown. They are let in and they sit facing the entrance, their backs to the emergency department hallway where doctors work to keep Devin alive. On the other side of locked automatic doors, a mass of friends and family — hundreds, by one report — gather in the dark.

Inside, restless patients shift in vinyl armchairs, waiting to be seen or set free. Two middle-aged women complain about the inconvenience, sighing and speculating why they cannot leave.

“Someone got shot up,” guesses one woman. The other replies, “So?” They laugh loudly.

Burney-Speaks is called in. Around 2 a.m., a death toll rings in the form of a guttural, agonized scream. The natural order is broken. A mother has lost her son. The waiting room falls silent, and the buzz from the florescent lights is suddenly oppressive.

Devin’s girlfriend then bursts from the emergency department hallway, obliterating the quiet. She rushes toward the door and, finding it locked, demands a security guard open it so she can face the crowd outside.

“Please! I need to let them know he didn’t make it!”

The guard refuses. The small young woman, still in her club clothes, crumples over the reception desk, shrieking and sobbing, observed but uncomforted.

The hospital begins to let patients and employees leave around 4 a.m. Weary witnesses rise from their seats and two security guards make small-talk by the door.

Before long, birds are chirping. Police officers and nonviolence advocates linger outside.

“This was as bad as it gets,” says one. “This could start an all-out war.”