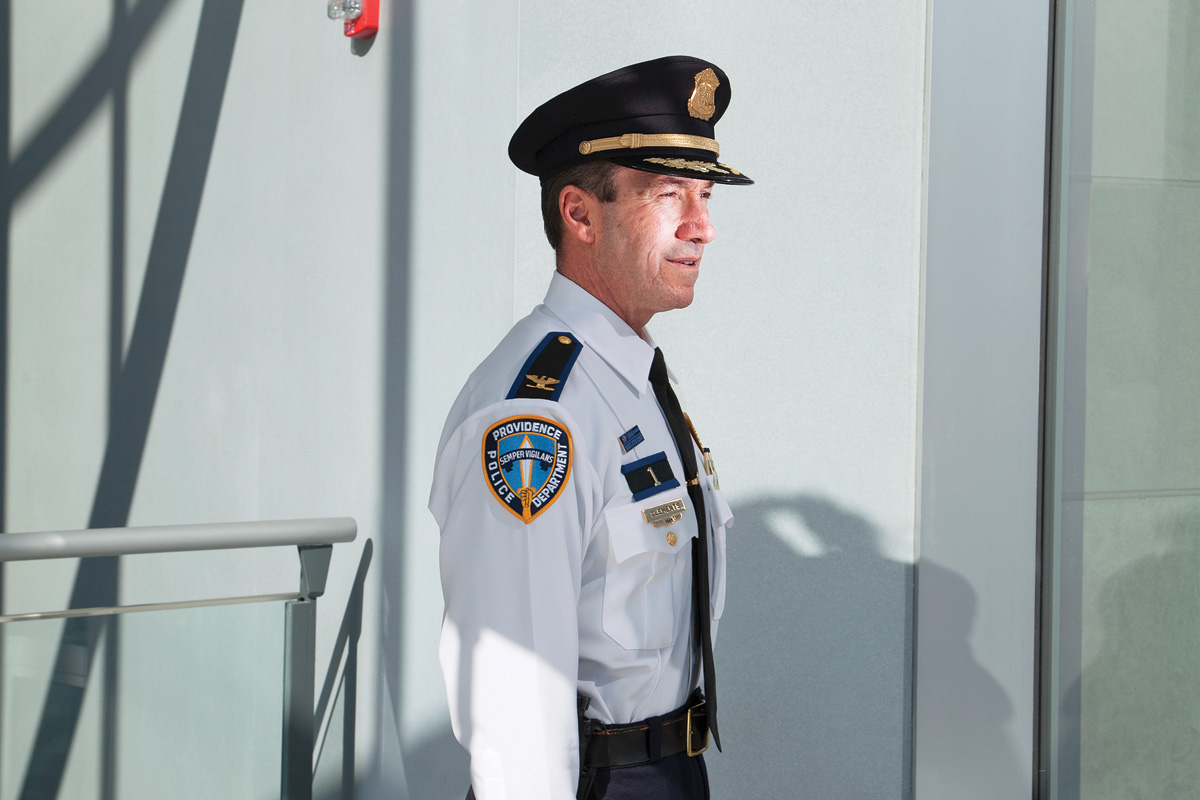 According to Providence Police records, crime numbers — violent and property, when tallied together — have been cut in half since 1996. In an interview at Providence’s Public Safety Complex, Providence Police Chief Colonel Hugh Clements credits this drop to two initiatives: the department’s focus on gun seizures — over the last two years, officers have taken more than 300 guns off the streets — and its implementation of community-oriented policing in 2005. The strategy assigns officers to high-crime areas with the goal of developing a rapport with community members.

In 2000, for example, the capital city saw thirty murders. In 2017, Providence reported thirteen; at least three, according to the Institute’s Fox, were gang-related, and five occurred in District 2 — Providence’s South Side. It’s a slight uptick from the year prior, when eleven people were killed in the city. None of the murders in 2016 were gang-related.

Shootings data, though, tell a different side of the story. The number of gunshot victims spiked in 2011, which advocates and police say correlates with the sluggish post-recession economy. But Providence has not yet bounced back to its pre-recession numbers for shootings; the city reported just forty-seven shootings in 2006. Sixty-six people were shot in Providence in 2017.

“We don’t hide from the fact that we have a gang and gun violence problem,” says Clements. “Every city does. The more important thing is we’ve made tons of strides and it’s far better than it’s ever been.”
Clements says he’s the first to admit that things could get worse, and refers to a high-crime spurt in January — with two homicides and seven non-fatal shootings — as a “hot zone.” Authorities suspect the first murder of the year, on January 2, was gang-related; the victim was allegedly a member of Throwback for Days, a C-Block affiliate.

Providence police track active gang members and feuds in a gang database; the department estimates there are about 1,400 active gang members within city limits. The new Providence Community-Police Relations Act, which was signed by the mayor last summer and went into effect in January, mandates regular audits of the gang database. Per PCPRA rules, city residents may inquire if their name is listed and they can appeal their placement in the database, as well.

Despite the intelligence his officers gather in the community, Clements says gang violence in Providence can be unpredictable. Feuds might be on their radar, and the department dedicates money and manpower to prevent retaliations. But it’s nearly impossible to know when a young man with a gun will pull the trigger.

“These younger sets, for whatever reason, they become enamored with the gang, with the life,” he says. “We’ve seen it with Devin. Good kid, by all accounts. A lot of our police officers knew him. They said he was a very personable, respectful kid. His mom is a wonderful person. She knew. She tried. He was just like glue — stuck to that life. And as much as people would try to extract him from that life, it was difficult.” 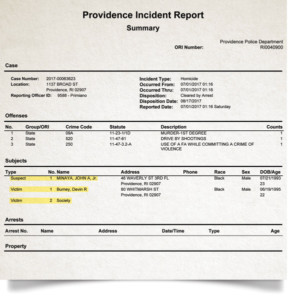 A few days later, Clements joins Providence Mayor Jorge Elorza, Public Safety Commissioner Steven Pare, the Institute’s PJ Fox, the NAACP’s Pilar McCloud and others for a meeting of the Mayor’s Advisory Council to Reduce Gun Violence. The meeting is held at the Institute’s building in lower South Providence.

It’s a temperate afternoon, and kids in puffy jackets race around a nearby playground. Their joyful shrieks permeate the meeting of local leaders, who are brainstorming ways to reduce gun violence in the city. One option on the table is a gun buyback program.

Pare says the department ran a buyback a few years ago that exchanged 220 guns for $50 gift cards. Fox says that, for a young man who feels he needs to carry for his own protection, $50 might not be enough. Some guns, he adds, are shared by multiple people.

“If you cast a broad net on this, you get these trade guns and show guns, which is good,” says Elorza. “But I’m not sure it’s really as effective as we want it to be.”

Elorza suggests arming the Institute with $200 or $300 for crime guns — “knowing that when you take a gun off the street, it’s a gun that’s been used. It’s a gun that will be used. That’s something I’m interested in exploring.”

Also at the meeting, Clements presents a map that color-codes the number of 911 calls reporting gunshots, from July through September of 2017. Small yellow and orange blemishes dot all four quadrants of the city. But an imposing growth — yellow, orange and pink at its edges and deep purple in its center — eclipses lower and upper South Providence in its entirety.

Clements’s map is drawn sharply into focus by the spirited noise of children on the playground outside. Despite a citywide reduction in crime over the last two decades, these kids still must learn to live with the sounds of gunfire. And their peers in upper South Providence — ones they could grow up to hate — have to live with it, too.