Artist Sam Heydt’s new art bodega and boutique, Kitsch, is the antithesis of your typical gallery. 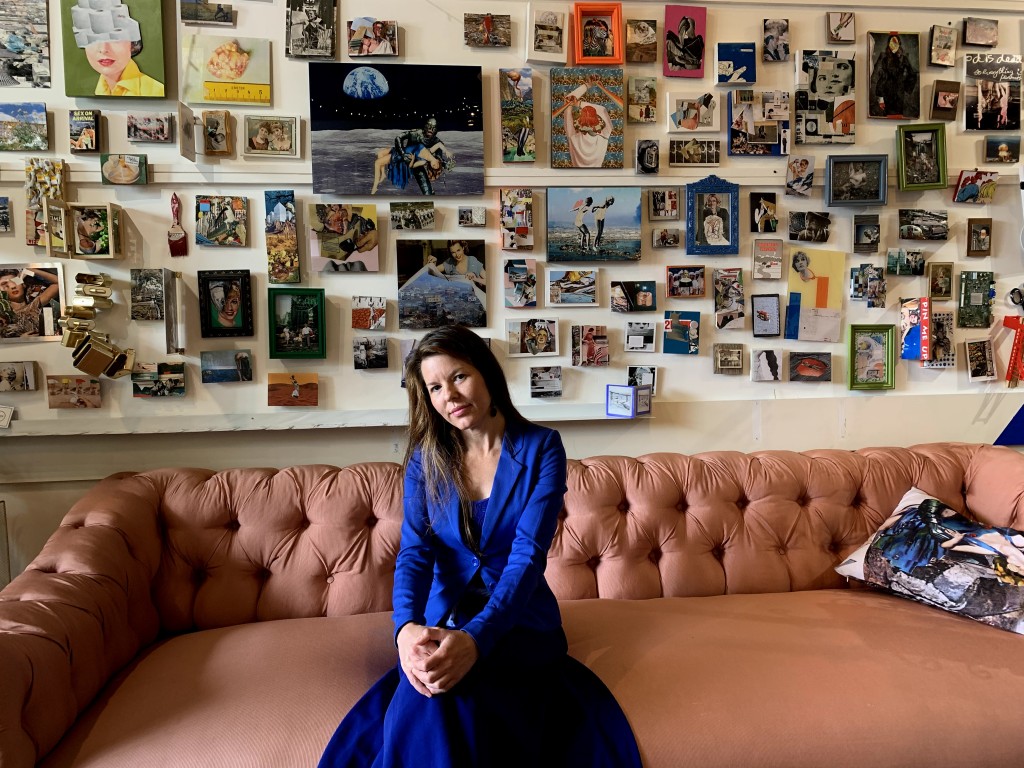 Plop onto the big pink couch, skim through the clothing hung on the baby blue rack, and behold the hundreds upon hundreds of art pieces stationed on the walls, desk and cabinets. This summer, recycled media artist Sam Heydt opened the doors to Kitsch, her new art bodega in Newport.

The New York City native has been visiting the Ocean State ever since she was a kid, taking in the Newport sun and beaches with her parents and siblings, who currently live here. During the beginning of COVID, she was grateful to be back in her family’s home after living in an apartment in Austria. The idea to install some of her work in a local storefront came about because she wanted to create a new gallery experience and allow a wide range of people to appreciate art in a casual environment.

The recycled media artist has had pop-ups in Miami, Florida, and Vienna, Austria, as well, but the time frame didn’t allow her to put as much work into the Newport art bodega.

“This was the first time there were no expectations on me, and I was able to have my way with the space,” says Heydt, who’s worked with several galleries overseas. The reason she called her space Kitsch is because it’s below the radar of the fine art market, and visitors can find lots of fun and interesting items such as magnets, postcards, booklets, stickers, clothes and more that don’t normally fit the framework of galleries and museums. She also hosts other artists’ works in the space to help them get exposure.

Heydt wears many hats as an artist: she’s dabbled in fashion, photography and documentary photography and, of course, collage. In her pieces, she features post-apocalyptic scenarios, “American Dream” iconography and appropriation from post-World War II America (“We forget that was also a time of segregated bathrooms,” says Heydt), satirical images, technology and climate change effects. Much of Heydt’s art consists of upcycled images and found footage. “I’m all about giving new life to old things,” she says. “Even the different mediums I work with, they all sort of collide with one another in different ways.”

Art for all is her motto inside this bodega, a laidback scene where people can enjoy themselves in a less formal setting with more art surrounding them than they could ever imagine. Heydt wants Kitsch to be the antithesis of a gallery and more like a fun maze with hidden gems every which way.

“I tried to create work that’s more affordable because I really don’t think art should be this privileged act of acquisitions,” says Heydt. “I wanted to create a space where anyone could afford something in here…so that people who’ve never collected art can say ‘I collect art.’ ”

What Cheer Writers Reflect on Reopening at Emergence: An Open Air Showcase