Here's where to go for lobster dishes. 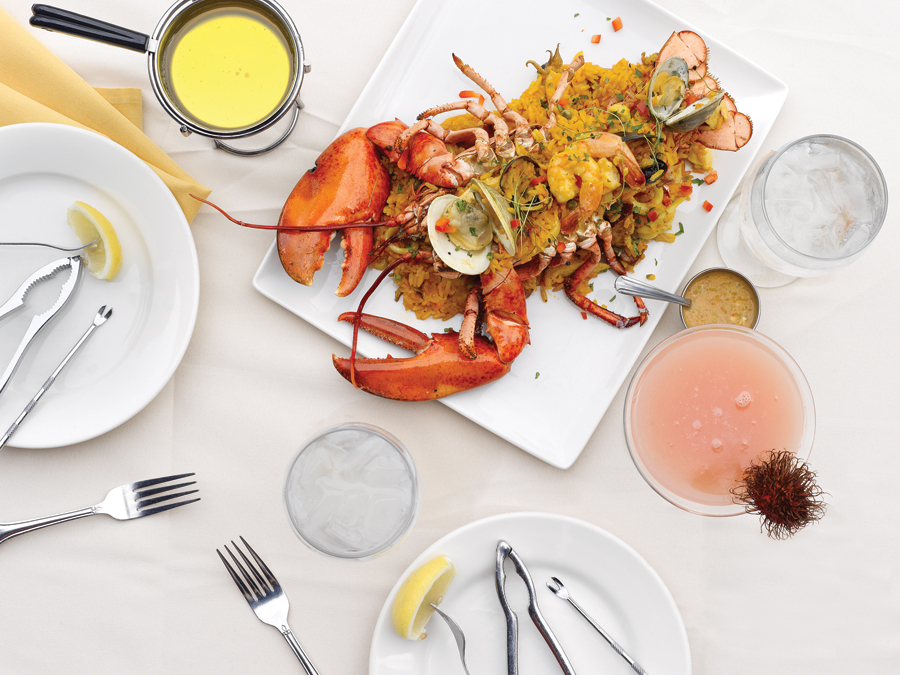 The lobster paella with a basil guava martini at Los Andes.

The Dish: As if paella itself weren’t enough, how about a one-and-a-half-pound Maine lobster perched over a pile of it? Prince Edward Island mussels and clams sit atop a full lobster smothering a mound of shrimp, calamari and yellow rice seasoned in a garlic wine broth.

The Scene: The Peruvian and Bolivian hotspot features South American favorites, often with a New England twist. Come for dinner and stay for the live Andean music on Wednesday nights from 8 to 9 p.m. from Bolivia Canta and the Trovadores.

Don’t Miss: There’s often a specials menu that goes out with the regular menu. This is the chef’s chance to work with seasonal ingredients, so give it a gander before you commit to a dish. Ask for a seat on the new outdoor patio complete with a kol pond that just opened in June.

The Dish: Chef David Reynoso offers lobster ravioli: tender handmade pasta stuffed with lobster meat, served with a sauce Americaine of lobster stock and butter, and topped with more lobster and diced zucchini as homage to New England summers.
The Scene: A wisteria-covered arch leads you to exposed brick walls and stunning views of the upper Providence River. You’ll likely see a mix of local regulars and visiting parents of Brown students, and there’s always a chance for a celebrity sighting.
Don’t Miss: Made-to-order desserts and ice creams by genius pastry chef Neil Temkin. The sweets at Al Forno are worth an extra hour or two at the gym.

The Dish: Lobster linguine, a marriage of lobster meat and truffle butter, atop a plate of fresh-made linguine. Chef Matthew MacCartney proves why he earned Food and Wine magazine’s award for the People’s Best New Chef in 2014 and 2015 with this made-in-heaven combination. Earthy truffle butter infused with lobster essence and sweet and briny lobster mingle to luxurious effect.
The Scene Drink in views of Narragansett Bay and the Pell Bridge with your well-crafted cocktail from the upstairs Bridge Bar and covered deck. Or enjoy woodstone oven pizza and other casual fare on the patio.
Don’t Miss: Native seafood like scup, fluke and flounder, as well as exotic additions from sustainable farms. MacCartney has featured Dover sole, Scottish langoustines and turbot from the Mediterranean alongside jewels from Narragansett Bay. The wine list also shines, bespeaking MacCartney’s decade of experience in the wine business 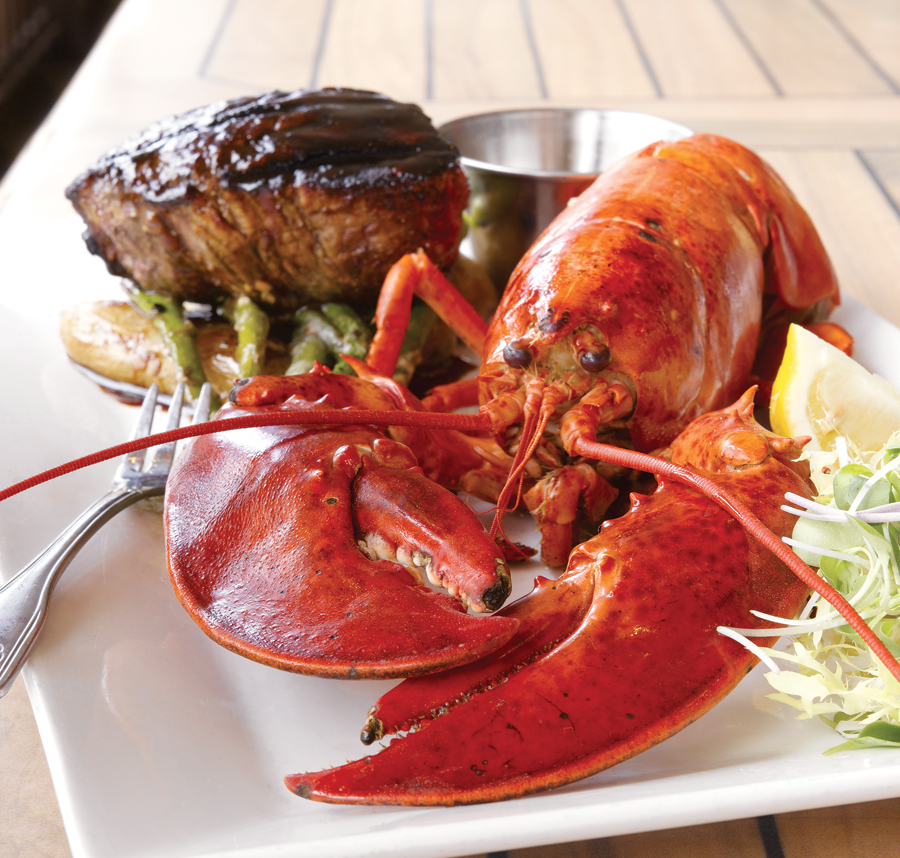 Lobster and steak at the Mooring.

The Dish: The Mooring is a master of all things surf and turf. Pair a Maine lobster tail (or a whole one-and-a-quarter-pound lobster) with a juicy Hereford center-cut filet or NY strip steak.

The Scene: You can’t get closer to the water unless you’re on a boat. Sit on the deck and it will feel like you are, surrounded by bobbing masts and sails on world-class yachts. Even the indoor dining room has the best views around. It’s like dinner and a show with the harbor as your stage.

Don’t Miss: Off-season deals like Paella Thursdays, available mid-November through the end of March. Get paella for two with whole lobster, clams, mussels, chicken, shrimp, rice, chorizo and saffron-garlic sofrito paired with sangria on Thursdays for $55. 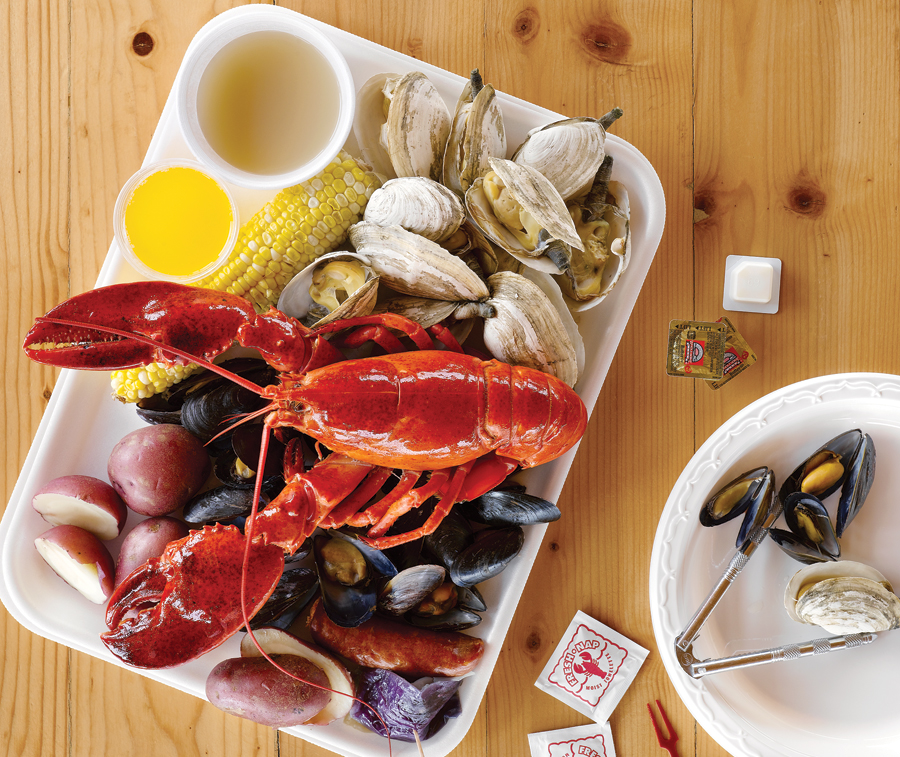 A seafood smorgasbord at Champlin’s.

The Dish: The clambake is a seafood smorgasbord. You’ll get enough steamers and mussels to feed a small army, plus a one-and-a-quarter-pound steamed lobster, red potatoes, an ear of corn and chourico sausage, served on a large tray to accommodate the sheer size of the meal.

The Scene: Nab an indoor corner table for surrounding waterfront views that can include fishing boats going out to sea and even harbor seals swimming along the shore. The outdoor deck delivers amazing views, but beware of dive-bombing seagulls.

Don’t Miss: Get there before 5 p.m. and you can go downstairs to the retail market and pick out your own two-pound-plus lobster in person. Champlin’s has been known to sell eight- and nine-pounders, if you’re looking to get your gigantic decapod fix. The lobster roll is also a must-try. 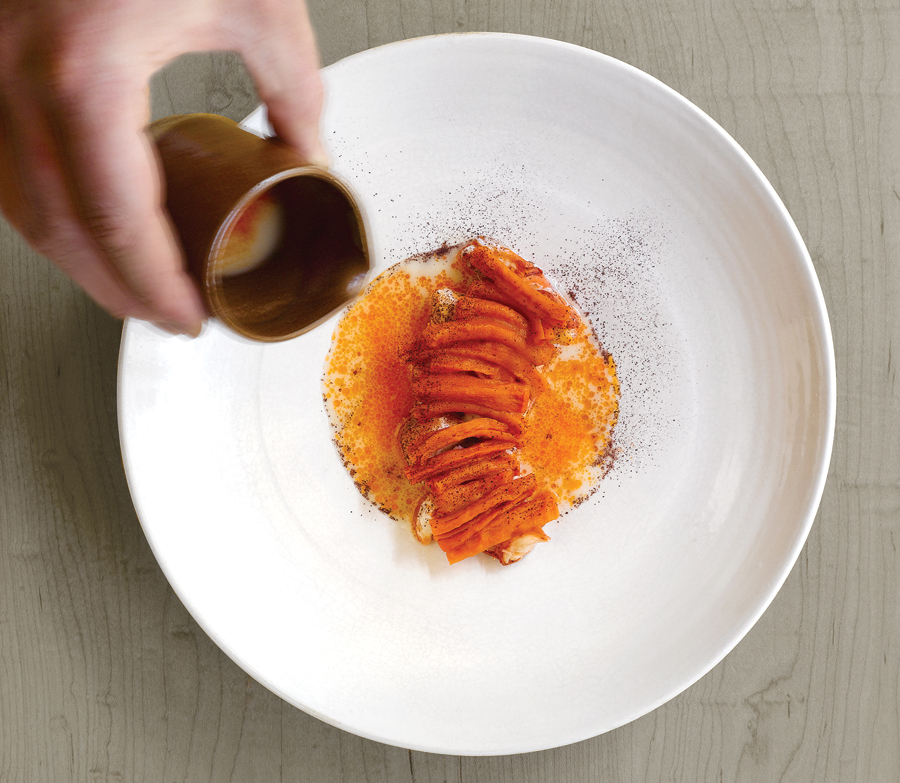 The Dish: Just when you thought eight-legged crustaceans couldn’t taste any better, chef Ben Sukle delivers a lightly grilled Rhode Island lobster that maintains its integrity with flavor enhancements from dulse seaweed and a lobster broth seasoned with the lobster’s roe and beeswax. Tail meat is topped with caramelized fennel and vibrant chewy carrot for textural and visual perfection.

The Scene: Eighteen lucky people dine around a U-shaped counter where the bartenders and chefs double-down as servers. Chat with Sukle and other kitchen staff as they explain the craftsmanship behind each dish and the short distance ingredients traveled to make it to your plate.

Don’t Miss: The $49 four-course prix fixe meal is a steal. Choose a dish from each menu category for an out-of-this-world food experience.

The Dish: Lobster Benny, a Mexi-fornian version of the classic Benedict. Generous chunks of lobster meat perch on poached eggs and English muffins, garnished with pico de gallo, guacamole, scallion hollandaise and whisper-thin slices of fresh jalapeños. Jalapeño hash browns provide a spicy, crispy contrast to the opulence of the egg/lobster combo.
The Scene: Brunch is a laidback affair with locals and regulars filling the bar stools and a steady stream of vintage Madonna and Prince on the stereo.
Don’t Miss: The tequila flights. Perro Salado features both vertical (a silver, reposado and anejo from the same producer) and horizontal (three of the same grade from different producers), offering the diner an accelerated education in the agave-based spirit.

The Dish: The lobster grilled cheese lunch special packs lobster meat between toasted and buttered bread slices stuffed with gruyere cheese. It’s crisp, cheesy and sweet with a hint of acidity from the sliced tomato.
The Scene: The lower level features a raw bar filled with regulars where you can order dollar oysters and shrimp and 50-cent clams for Raw Bar Happy Hour from noon to 2 p.m. every day and all day on Tuesdays. Tables accommodate the masses in tight, galley-like seating, while the decor includes a mix of mermaid masts and local memorabilia.
Don’t Miss: Bring your camera and wander up to the third floor, where the rooftop bar, the Crow’s Nest, awaits with harbor views. Enlist a steady hand to snap a photo after all those Dark ‘n’ Stormys.

The Dish: At the Lobster Pot, you don’t order the chicken. Lobster comes in myriad ways: boiled, steamed, grilled, baked stuffed fisherman style, chopped and dressed in a lobster roll, sprinkled on a white pizza and as part of a clambake with sausage, potatoes and steamers.

The Scene: Open year-round. Soak up harbor views in all seasons. Summers bring cool breezes to the waterfront patio while boats bob along. In cold-weather months, cozy up to the fireplace with a bowl of hot lobster bisque.

Don’t Miss: Time your visit so you don’t miss the sunset over Narragansett Bay. Sip a watermelon mojito or Champagne sangria while the sun, clouds and harbor put on a fiery show.

The Dish: A two-pound lobster is sliced down the middle with the tail and claws gently cracked open for easier eating. The shell is left intact to keep the meat moist while the lobster is stir-fried with ginger and scallions to infuse flavors. The whole shebang is presented over rice.

The Scene: The dining room’s upscale interior says Las Vegas in Little Rhody, while the bar does nightlife just as well as it does dinner. The prime spot is on the outdoor terrace overlooking Waterplace Park (optimal during WaterFire). After booking a dining room reservation, the patio is first-come, first-served upon arrival.

The Dish: It’s hard to mess up lobster, especially when it’s stuffed with baked scallops, shrimp, cracker crumbs and white wine. Lobstermania is the signature dish, and it can be ordered by the single size (market price), with a twin or the two-pounder version by special request.

The Scene: We prefer the casual downstairs vibe to the upstairs dining room. It’s the same menu, but slightly smaller portions. Later in the evening, listen to live bands while the water laps up against the dock. In summertime, the retractable doors open to the harbor where boats stop by for a bite to eat.

Don’t Miss: Live music on Friday and Saturday evenings and Sunday afternoons. Kids’ meals are served on a Frisbee that they can take home at the end of the meal. Warning: You may be tempted to fling it to sailing passersby.

The Dish: Order anything here and you can do no wrong. In fact, when people ask, “Where’s the best place for seafood in Rhode Island,” we’ve been known to say, “Matunuck.” Go simple with a boiled lobster of any size, served with drawn butter, potatoes and Matunuck Farm’s own seasonal vegetables, grown right down the street on owner Perry Raso’s farmland.

The Scene: Just as you can do no wrong by choosing anything on the menu, there’s not a bad seat in the house. Inside. Outdoor patio. Upstairs. Middle table. Corner table. You can see views of Potter Pond from almost any direction.

Don’t Miss: This may be a story about lobster, but we won’t let you leave without slurping down a few Matunuck oysters grown in the very pond on which the restaurant is located. It all started with farming oysters and then the restaurant came later. It’s like the Farm of Dreams; if you build it, he will come.

10 Things You Should Know about Selecting, Purchasing and Caring for Live Lobsters

Day in the Life of a Lobsterman

On the Market: Where to purchase the freshest lobsters and seafood

Things to Know About Rare and Unusual Lobsters