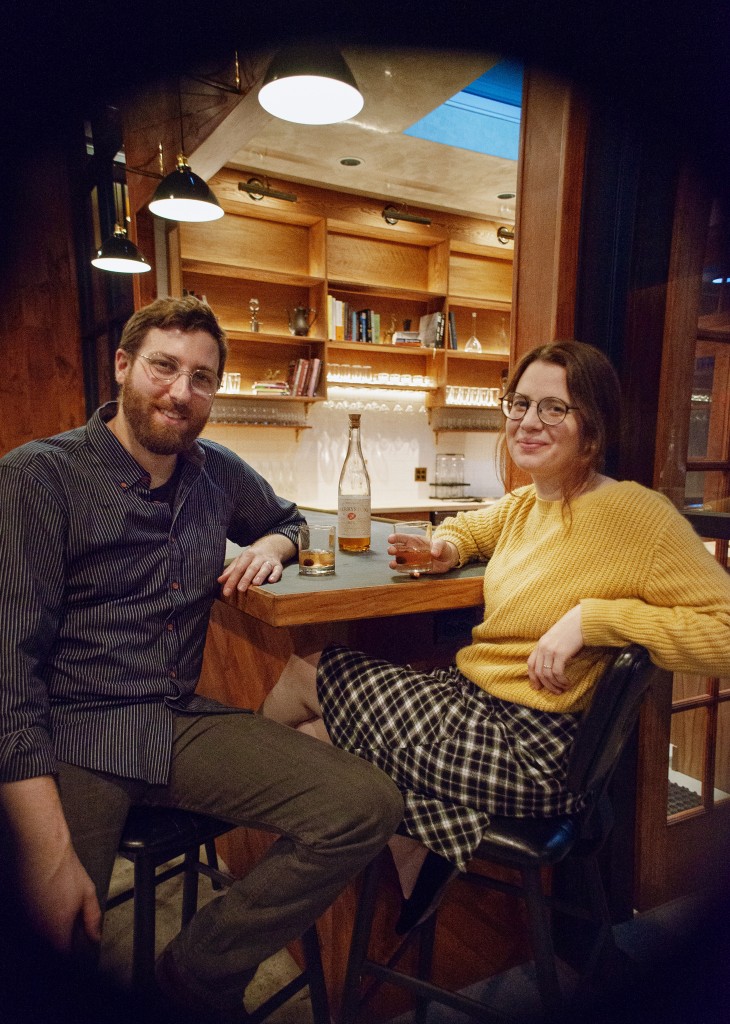 Adam and Natalie O’Brien of Bristol’s O’Brien and Brough. (Photo by Josh Cornell)

In a former industrial park in Bristol, a few blocks away from bustling Thames Street, two local business owners have been quietly honing their craft.

Bristol residents Adam and Natalie O’Brien are preparing to unveil their new distillery, O’Brien and Brough, after more than a year of planning. The whiskey-focused distillery is slated to open on Nov. 19 in Unity Park, a revitalized former factory complex that has seen a flood of new businesses in the past two years.

“The idea of just seeing a finish line is amazing,” says Adam. “It’s been two years of getting the business plan up and running.”

While the buildout of the tasting room — a sleek wooden space that feels more private clubhouse than nautical kitsch — took six months, Adam says the idea has been around for more than a decade. The Rhode Island native became interested in distilling while working his first job at Haxton’s Liquors in Barrington. Later, while working as an audiovisual systems engineer at Suffolk University and living in Cambridge, he went into Boston often for whiskey tastings to get a feel for the craft. During the pandemic, he completed a brewing and distilling program at Scotland’s Heriot-Watt University and decided it was time to go all-in on whiskey.

“It kind of got to the point where we said if we don’t try to do this, we’re all going to be disappointed,” he says.

He and Natalie, a practicing lawyer, began looking for a space. They found one in Bristol’s Unity Park, a former factory complex already home to a range of food and drink businesses, including Pivotal Brewing Company, Borealis Coffee Company, Basil and Bunny and Brick Pizza Co. Natalie describes the collaboration-minded complex as a “gold mine.” The distillery shares a patio with Pivotal Brewing, and they’ve already spoken with the owner of Borealis about partnering on a coffee-based beverage.

Despite Adam’s distilling background, the couple wants customers to know they’re not whiskey snobs. Their first release is a blended rye, a variety they say often gets short shrift in the craft spirits scene.

“A lot of people, when they think of a bourbon, they think it’s smoother and easier to drink, but a good rye can be just as great,” Natalie says.

In addition to blended whiskeys served neat, they plan to offer classic whiskey cocktails including an old fashioned, Manhattan and whiskey sour, along with seasonal offerings like mulled cider and hot buttered whiskey. The 5,000-square-foot distillery offers room for the business to grow. (The family is growing, too, with a one-year-old who makes regular visits to the distillery. “There’s a Pack ‘n Play back there,” Adam says, gesturing to the glass-fronted workspace behind the counter.) For Adam, the location is all about coming home.

“We really wanted to do it in Rhode Island. I kind of decided early on we wanted the East Bay as our home,” he says.

7 Rhode Island Distilleries to Put You in Good Spirits