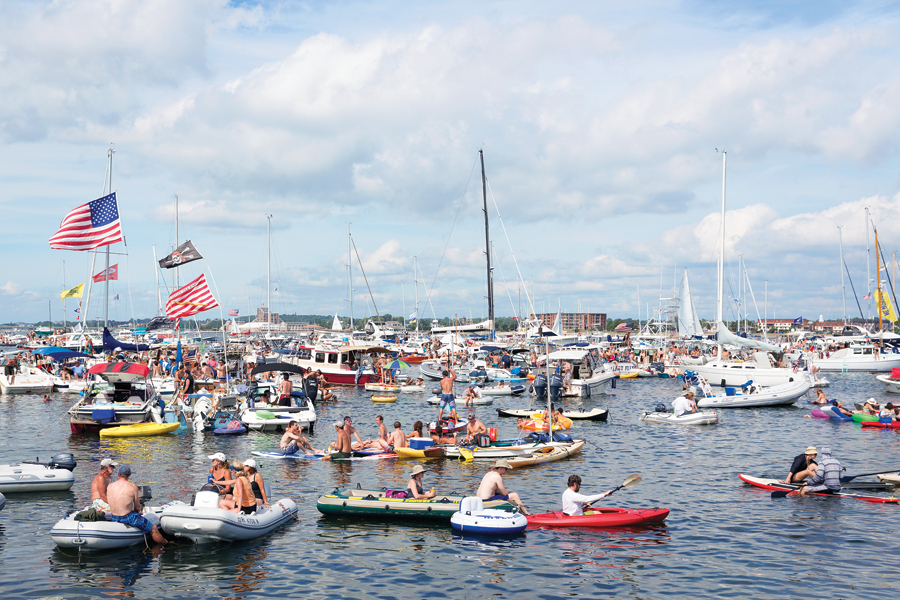 Imagine a Folk Fest without tickets. Without dusty Fort Adams feet. Without kimonos and jean jackets — without much clothing at all. Without a good view of the stage, sure, but without a care in the world.

It’s a little after 2:30 p.m. on Saturday afternoon, and the breeze just turned in our favor. An eastern wind carries Jason Isbell’s twang, loud and clear, from the Fort Stage all the way back to the Atlantic, where Christian Schlebach navigates a red dinghy through dense patches of paddleboards, kayaks, snorkelers, inflatable islands and anchored motorboats. The sea is gray, the sky is blue and intermittent white clouds provide shade from the strong July sun. 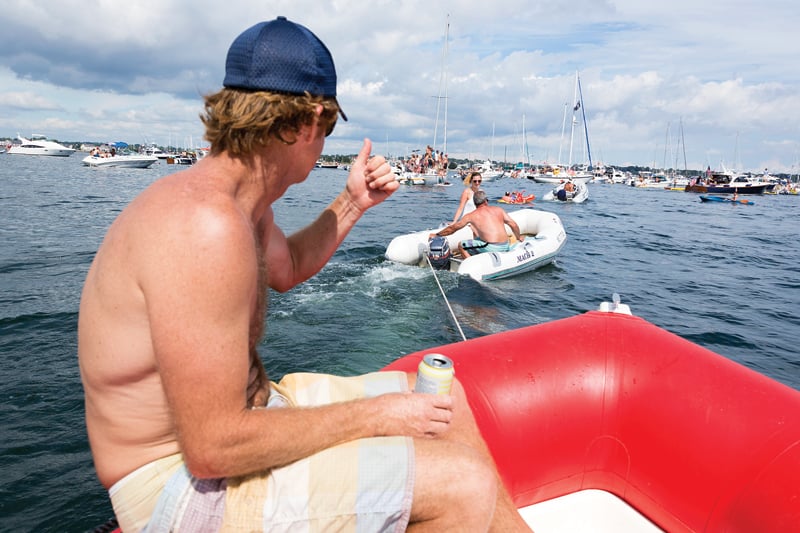 A few breezy minutes later, we arrive at our Folk Fest flotilla: a couple of boats rigged on either side of Surfari, Schlebach’s renovated lobster boat. New this year: a floating putt-putt golf course on an old pontoon — green AstroTurf and all. 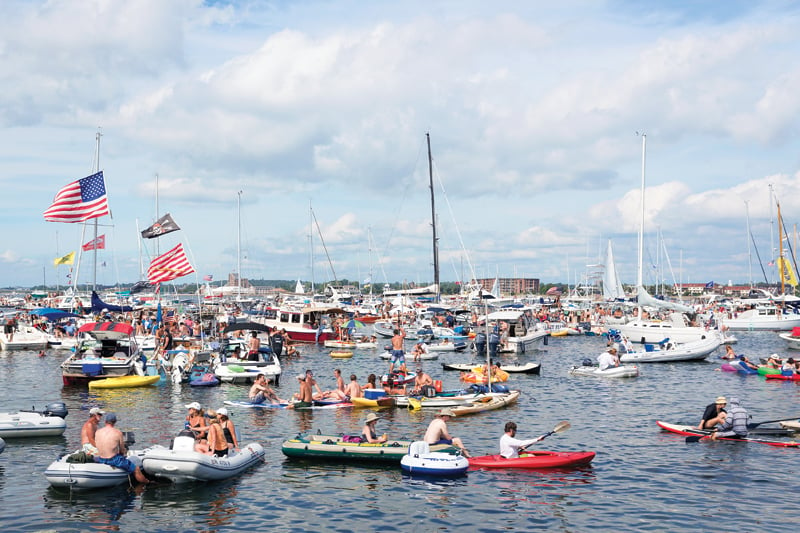 The putt-putt is part fun and part promotion. Schlebach’s former Hooley intern, Broney Shillo, a Salve Regina University alumna, just launched a small-batch spiked lemonade line out of Fishers Island in New York, where her family operates an inn. The flotilla is an open house of sorts: Friends and boat neighbors paddle over for camaraderie and a shot at some free spiked lemonade for every hole-in-one.

That is, until the pugs get involved.

In a flat-brimmed Providence Bruins hat and black tank top, Newporter Chris Fortin sets up a shot. He swings his putter and the ball coasts in a straight line towards the catch. But the flotilla’s wrinkled mascots, Boss Man and Archie, can’t resist the speeding white toy. Boss Man snags the ball and carries it to a shady spot beneath a chair. 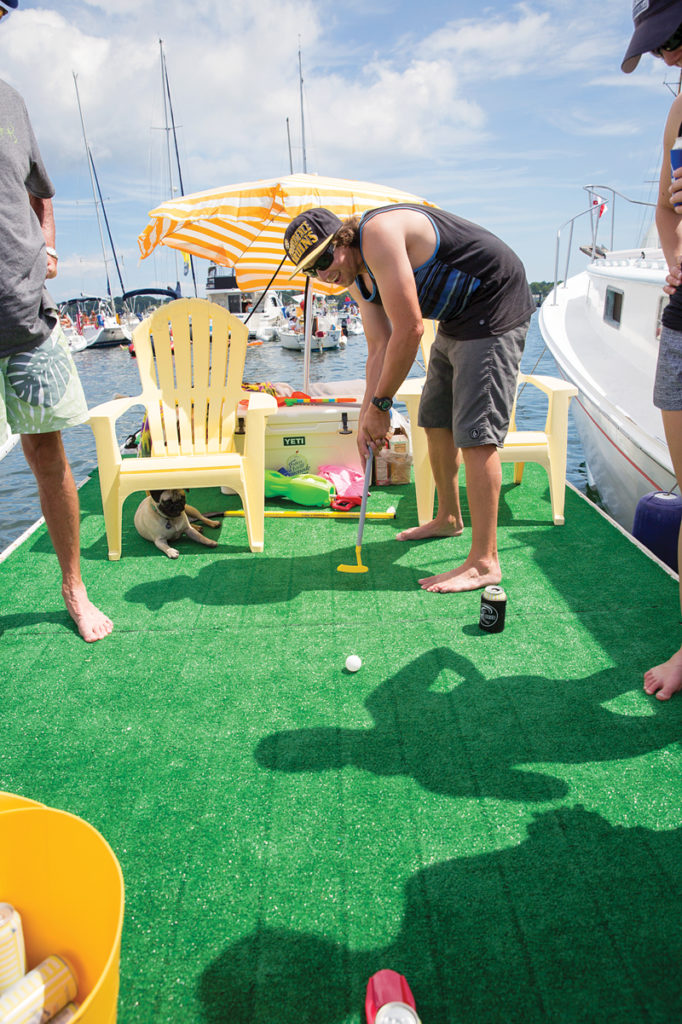 Newporter Chris Fortin goes for a hole-in-one on the Folk Fest flotilla.

Despite the clear interception, Fortin helps himself to a lemonade. Earlier in the day, he and fiancee Martha Pitt paddleboarded to Schlebach’s flotilla from King Park in Newport. It’s Fortin’s third year catching the Folk Fest from the water. “It saves a lot of money and you can’t swim in the fort,” he says.

About a dozen people in bikinis and board shorts laze on Surfari’s fly bridge or face Fort Adams from the bow, bobbing along to the music. A few others stretch out in kayaks and assorted floating vessels. One fellow is forced aboard after his plastic tube deflates to the point of no repair. By his count, it lasted a total of four hours and fifty-five minutes — a job well done. 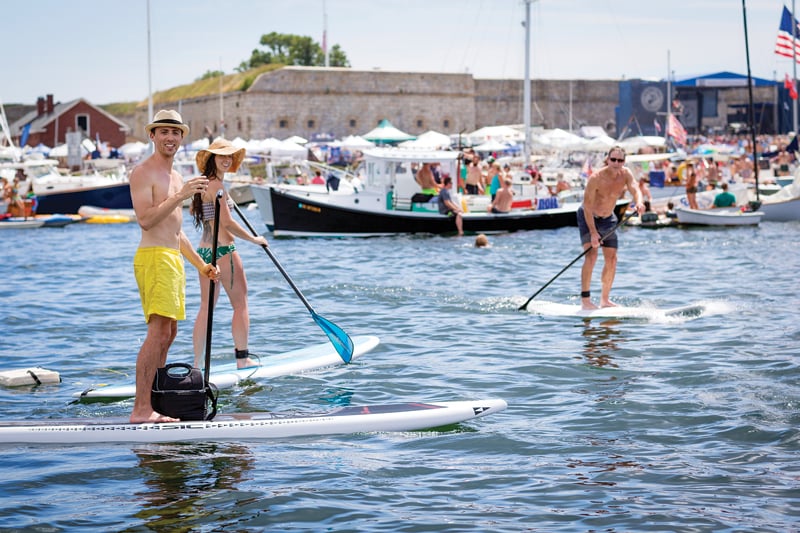 Paddleboarders enjoy the music from the water.

“I’ve been listening from the water for fifteen years, ever since I came to Rhode Island,” Schlebach says, capping his strawberry blond hair with a USPS hat. “It’s been fun as hell. It brings the community together. There are people from all walks of life out here. Whatever floats your boat.”

Schlebach and his wife, Erin, host one of the larger Folk Fest flotillas, but he still finds time to make neighborly cruises. We hop back in the dinghy and coast over to visit Regis de Ramel, founder of Air Newport, whose yacht is anchored on the outskirts of the mayhem. 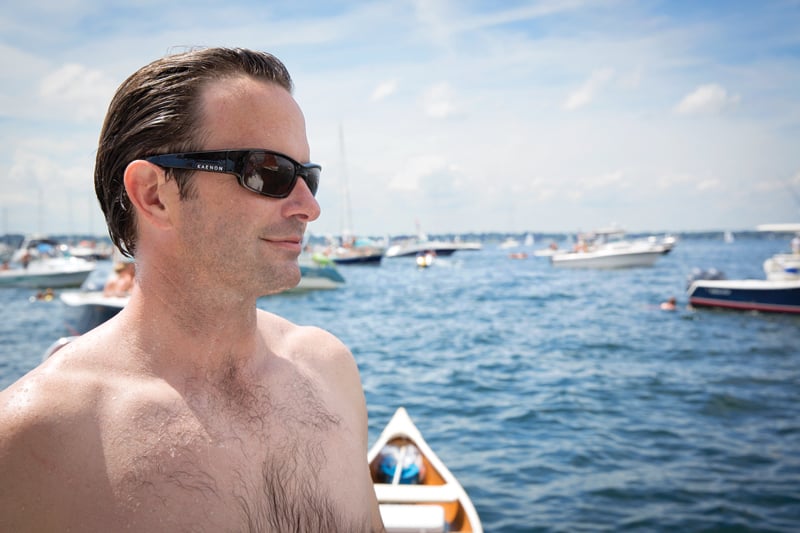 Regis de Ramel, founder of Air Newport, whose yacht is anchored on the outskirts of the mayhem, has been watching the Folk Fest from the water since he was a little kid.

“I’ve been watching the Folk Fest from the water since I was a little kid,” de Ramel says, citing a 2008 performance by Jimmy Buffett as a recent favorite. “This is the place to be.”

Before long, we head back to Schlebach’s flotilla. “I’m almost at low tide. You don’t want to hit low tide at the Newport Folk Festival,” he says, boat-speak for a drink that’s bordering on empty.

But we run into some trouble. The dinghy overheats and Schlebach cuts the engine. Serendipitously — or, exactly how it would happen on the water at the Newport Folk Festival —yacht designer Ted Fontaine cruises by in his own skiff. Schlebach waves him down and asks for a tow back to Surfari. Fontaine is happy to help, and the dinghy train weaves nimbly through the center of the action. The crowd on land cheers as Jason Isbell closes his set and Schlebach shouts to every familiar floater, “Hey broseph, come over for a lemonade!”