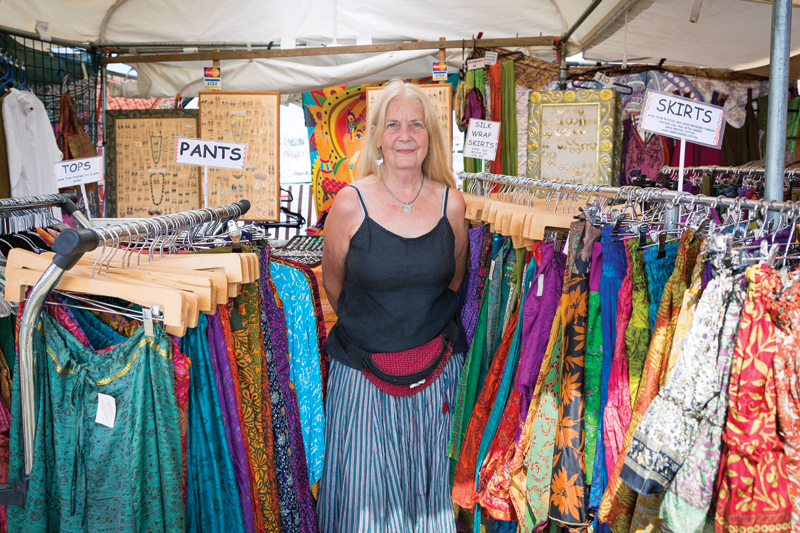 A sandalwood-scented tent packed with airy fabrics or the Atlantic behind it: It’s tough to choose which is more inviting on a steamy late-July afternoon at the Newport Folk Festival.

Leslie Gray’s booth brims with racks of perennially on-trend dresses, wrap skirts, palazzo pants and jewelry of silver and brass, all collected from travels abroad. Gray, who wears her white-blond hair long and loose over her shoulders, her nose pierced with a small pearl set in gold, runs the shop with her husband, Michael, a former psychologist from Australia. They met in the 1970s in India, where they were both studying meditation.

“We determined together that our life focus would be enlightenment,” she says. “But then we thought, this might take awhile, so we need to make a living in the meantime.”

The couple spends about half of the year in western Massachusetts and the rest in Asia, handpicking textiles and enlisting local tailors to make their designs. Most of the fabrics — silk, chiffon and new cotton garments for men — are recycled from old saris.

“I see something that’s just beautiful and I want to support it,” Gray says. “That’s the beauty of owning your own business; we can do what we want.”

The shop owners have peddled goods at the Newport Folk Festival since 1985, the summer the event was revived after a fourteen-year hiatus. “There were about five of us altogether, and it cost $75 to set up a booth for the weekend,” she says. “Back then, nobody had tents. We just set up some tables and had sticks to hang bags and scarves from.”

Over the course of her Folk Fest tenure, Gray has witnessed changes in waves. “It’s gone up and down. It often felt like it was dying. They brought in some weird sponsors, so that might’ve had something to do with it,” she says.

But she’s noticed a steady improvement in the festival in recent years. “I feel Newport is very alive,” she says.

The only downside to the newfound popularity of the festival, Gray says, is its effect on business. “We almost didn’t come,” Gray says. “We’ve been coming for three decades, but two years ago they increased the number of vendors. There just wasn’t enough butter to spread on the bread.”

Gray decided not to apply for a slot, but upon her return from India, she felt the urge to contact Tim Tobin, the festival’s longtime vendor organizer. A space opened up, and Gray celebrated her thirtieth straight year at the Folk Fest in 2015.

She pauses to help a young woman with long dark hair, hoops in her nose, eyebrow and ears, and a woven rucksack slung over one shoulder.

“This new generation of hippies — they have piercings and tattoos and dreadlocks,” Gray says. “They have that generosity of spirit. They have heart. They want to rise above the madness in our country, and it gives me faith, being here and seeing them and speaking with them. I’m so filled with hope.”

Outside of Gray’s booth, the salty breeze catches a pair of silken print dresses on wooden hangers. Melodies from the Fort Stage drift over a sea of people, and the two multihued visions twirl to the music.