A supper club, cafe and Comedy Park are all in the works for the historic neighborhood theater 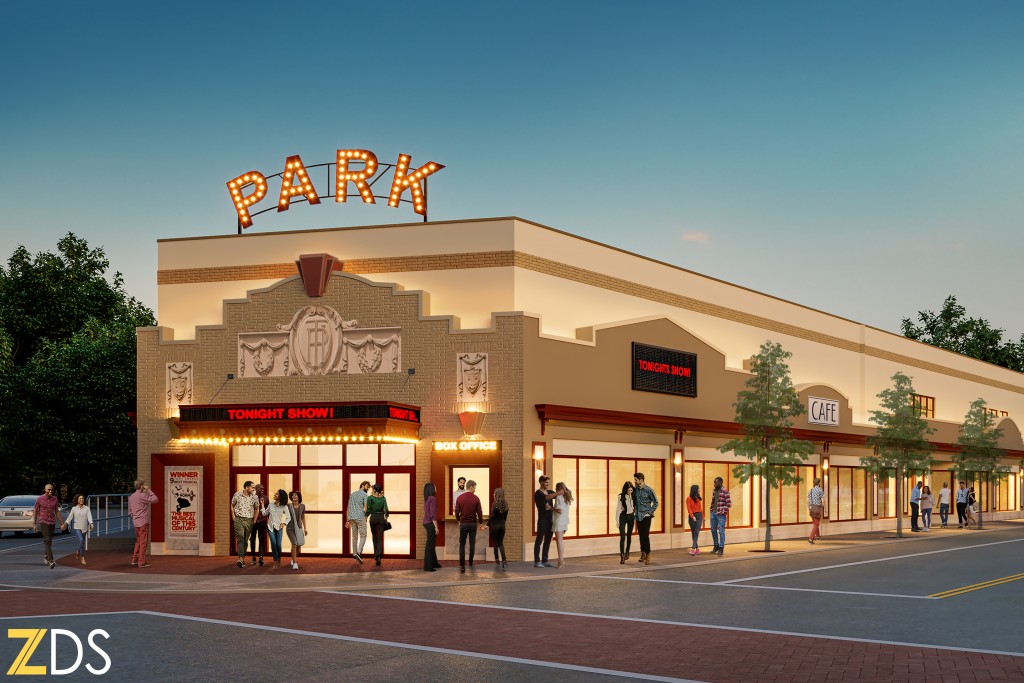 A rendering by ZDS Architecture shows the planned exterior of the historic Park Theatre.

The Park Theatre has been a part of Cranston’s history since it opened in 1926, its iconic marquee standing tall over the busy activity of Rolfe Square.

So when Ed Brady and Jeff Quinlan of Dig In Dining announced plans to purchase the now-shuttered venue last fall and return it to its former glory, the revitalization effort caught the attention of top leaders around the state.

“This is not my theater, this is Cranston’s theater. This is Rhode Island’s theater. And there’s going to be a lot of magic that happens on that stage,” says Brady, speaking to a crowd gathered outside the century-old theater on Tuesday, February 22.

The event served as the unveiling of plans for the newly revamped theater, the first phase of which is expected to open in April or May. Downstairs, guests will walk through a renovated foyer before entering the 1,050-seat theater, where the owners plan to host theatrical performances, dance recitals, old movies and other local and national acts.

Along with the theater, the ground floor will host the Park Place Cafe, a dining venue featuring pizza, coffee and live music. Parking for the building will be behind nearby City Hall.

Rounding out the offerings on the ground floor is the Comedy Park, a new comedy club managed by Funny 4 Funds owner Bill Simas. In addition to the 150-seat club — which will have a separate entrance from the theater — the space will serve as the new physical location of the Rhode Island Comedy Hall of Fame, paying tribute to the state’s comedy legends.

“I’m really excited. I think it’s time for another comedy club in Rhode Island, and there’s definitely room for it, and there’s plenty of people who go out and support live entertainment,” Simas says.

Phase two of the revitalization will involve the building’s second floor and feature The Rolfe, a supper club offering music, burlesque and other live entertainment, according to Brady. He and Quinlan have experience in the restaurant industry as the co-founders of Dig In Dining, the group behind the Thirsty Beaver and Huck’s Filling Station. Phase two is expected to open next fall.

Tuesday’s announcement drew political and entertainment industry leaders from the around the state, including Governor Dan McKee and Cranston Mayor Ken Hopkins. McKee, who announced his formal campaign for reelection earlier in the day, describes the Park Theatre as the “cultural heartbeat” of Cranston.

“This is an important day for the city of Cranston. I travel all the cities and towns of the state, and I know the impact of opening up a theater that’s closed,” he says.

Steven Feinberg, executive director of the Rhode Island Film and TV Office, recalls seeing classic movies like The Poseidon Adventure and Willy Wonka and the Chocolate Factory at the venue as a child. He pitched the idea of holding a Rhode Island screening of Hocus Pocus 2, filmed partially in the state, at the theater in October.

The Park Theatre opened in 1926 and functioned as a classic movie house until cultural changes brought that era to an end. Piyush Patel purchased the property in 2009 and restored it as a performing arts venue, but the pandemic forced it to close its doors, some feared for good. The building was up for auction when Brady and Quinlan purchased it last year.

Hopkins says the project is part of a six-year effort to revitalize the surrounding area.

“This is the final piece of the puzzle. We’ve done everything else, now it’s up to you. Let’s get this show on the road,” he says.

The Dish: Around the World in Cranston’s Rolfe Square