The spiffed-up former gas station has a creative menu and also offers take-out.

It’s a small space, seating twenty-six at tables and ten more at the bar. Outdoor space is sectioned into a small (very small) parking lot and pergola-covered dining room warmed by fire pits. And it’s here you can start to see that, in a battle royale between society and something more pastoral, the woods win out. 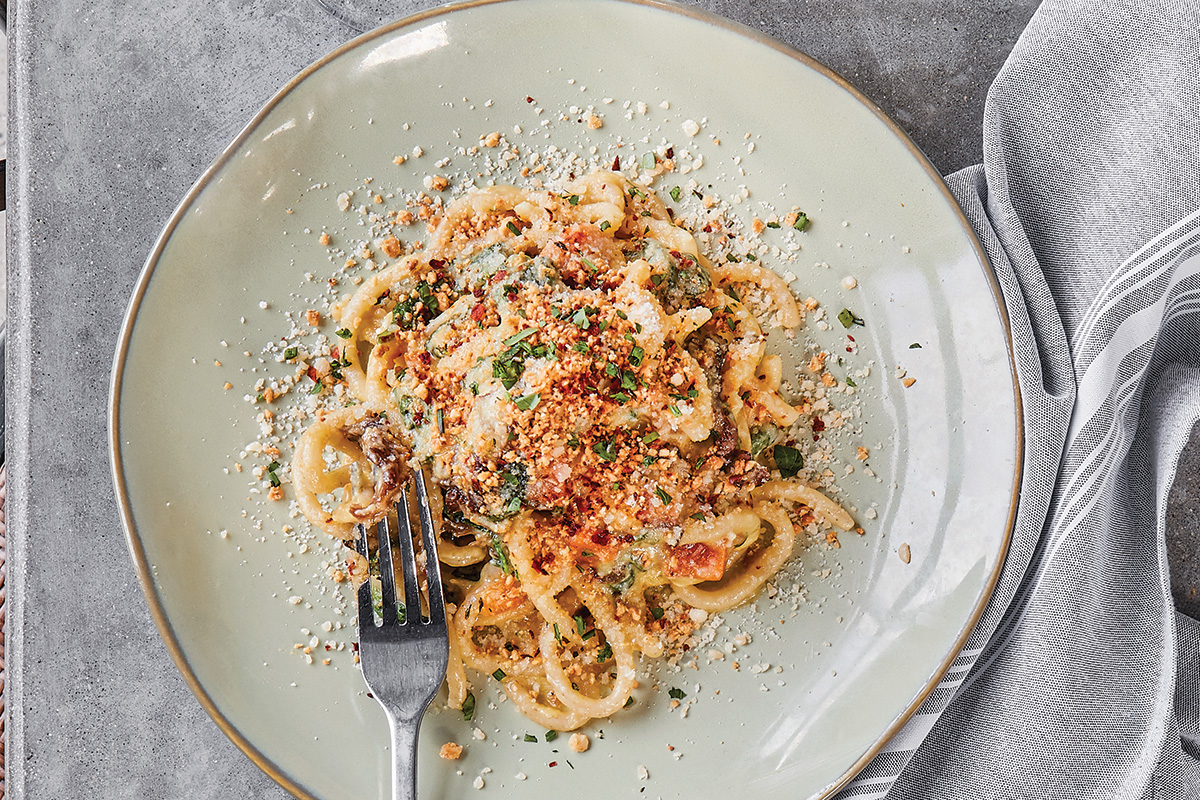 Huck’s owners, Ed Brady, Jeff Quinlan and executive chef, Andrea Leonardo, are no strangers to unconventional spaces. Their earlier restaurant, Milk Money, turned a basement off the highway into a moody, lived-in lounge and this one seeks to wash away society altogether on an intersection at Post Road. To be fair, the possibility of keeping civilization at bay depends on the weather. On warm nights, diners spill out onto the patio and the restraints of reality dissipate for an evening. Glass walls give way to a backyard party where groups gather around a bonfire dipping into fried chips and warm trays of viscous raclette.

When the doors are closed, the imposition of humanity is pronounced though: tables — particularly two-tops — are tight and conversation tends to overflow onto adjacent tables. (“I was 213 six months ago,” a boisterous man offers to everyone. “Now: 193. Awesome, right?” Awesome indeed.) But the restaurant is devoted to a down-home experience that comes across in aesthetics (a collection of mismatched cabinet doors above the bar alongside quilted banquettes) and attitude. Servers greet strangers like family (“What’s up, you guys?!”) and regularly snap photos of dinner parties when a selfie seems too challenging. The staff also covers the spectrum of personality: man-buns at the bar, good old boys pushing plates and good-humored women calling out specials. 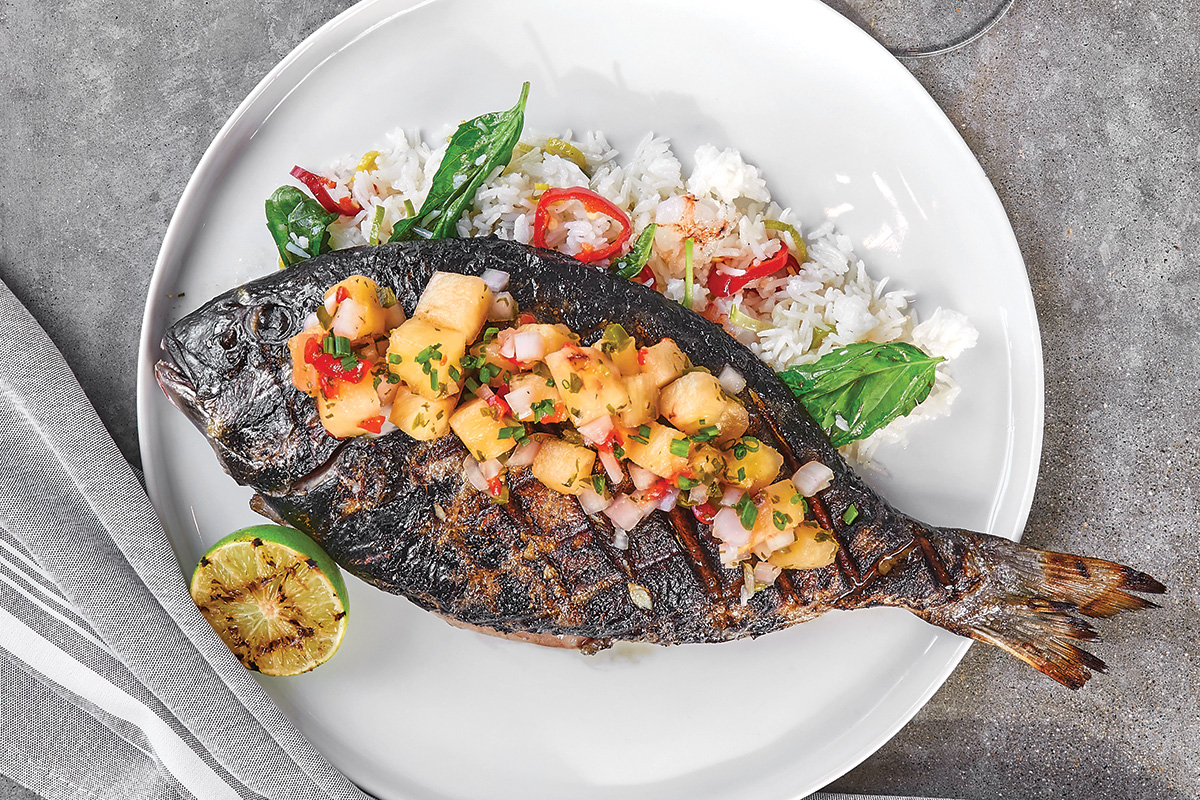 But the real link to a more bucolic America is in the menu, which uniformly (unlike Twain’s man-boy) delivers more than it promises. It reads like a somewhat random collection of ingredients, held together by a thin string of Southern culture: cornbread, grits, greens, fried oysters. It unfolds, however, as an acute awareness of national diversity and culinary heritage. Chef Todd Camp is a matchmaker at heart, pairing disparate textures and flavors that prove inherently complementary. The restaurant is big on vegetarian and vegan options, not only philosophically but because Camp clearly relishes produce. The house-made bucatini carbonara ($23) has no pork in it; instead, it’s punctuated with sweet potatoes, greens, mushrooms and a dose of parmesan so hefty you’d swear there’s smoke in it. The plate comes together like the culmination of a day spent foraging and a reminder that local farms are full of surprises. 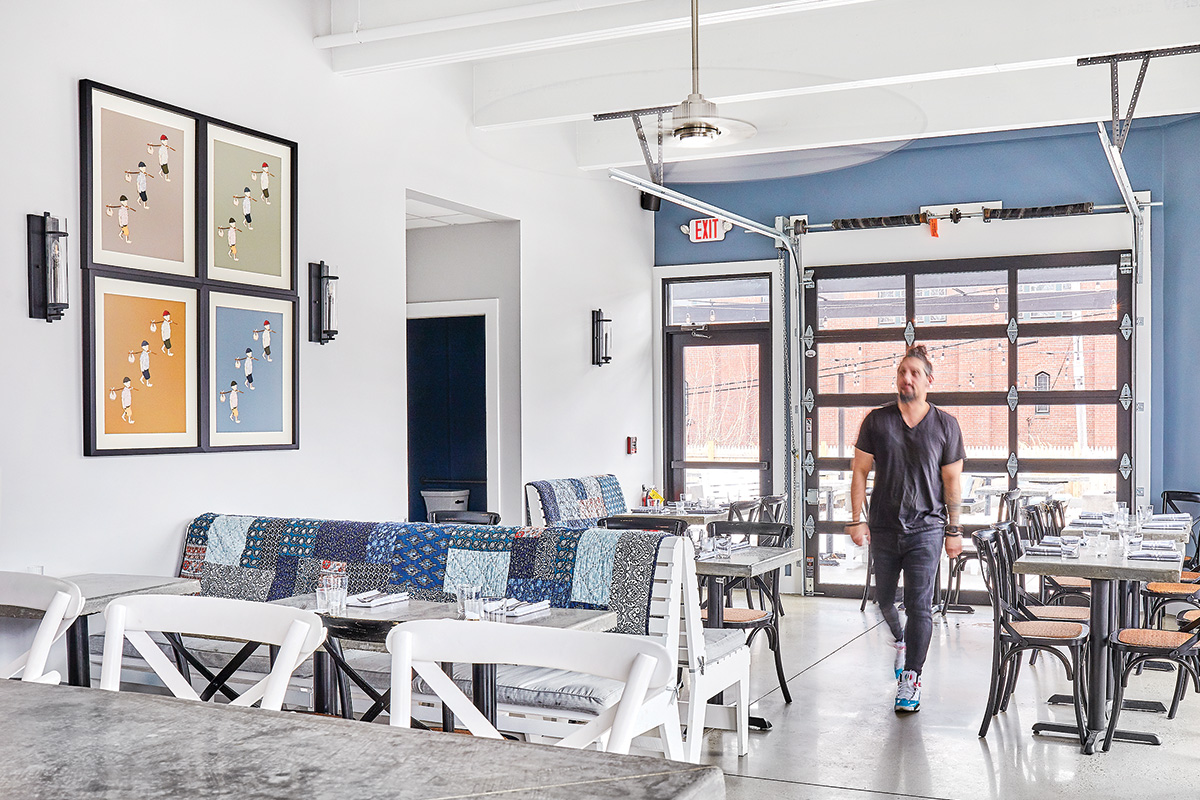 The interior of Huck’s is devoted to a down-home experience. Photography by Angel Tucker.

There are plenty of other mainstays at Huck’s that bring Camp’s agricultural manifesto to life: chips served with beet dip, grits loaded with gouda, brussels sprouts mixed with peanuts ($8) and hefty slabs of sweet potato cornbread ($9) drizzled with hot honey and duck fat butter. If the amalgam sounds heavy, that too is misleading. There’s a brightness to the collection, evident in the whole roasted fish ($36), which is so heavily seasoned that you’ll eat the crispy skin as if it belonged to a roast chicken. Better though are its partners in crime: a crispy umami-rich fried rice on the bottom and a cool tomatillo-persimmon salsa on top.

It seems like a lot. But, as Huck’s proves, there is harmony is variety. In fact, eating Camp’s food is a joyful endeavor, in part because he proves you wrong each time. Familiar dishes are surprising and novel combinations that burst forth with nostalgic familiarity, not unlike the dynamic that draws us back to our hometowns and the family that remains.

Sweets are much the same but the kitchen tweaks standards just enough to make them interesting. Chocolate is served in a plethora of ways, from a rich torte to a retro swiss roll. Custards come out as panna cottas or creme brulee. But fruit is always the star, wrapped in tart dough or nestled between biscuits with a thick dome of whipped cream. 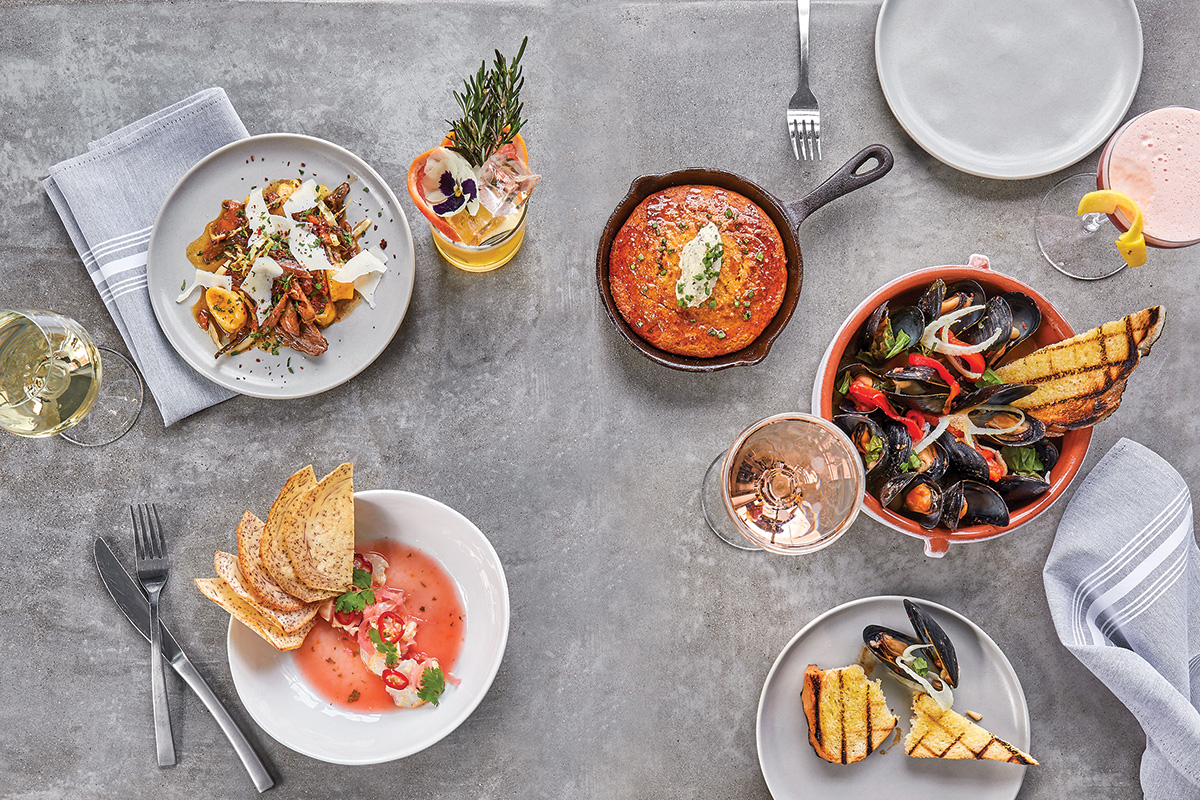 It’s easy to say that Huck’s has achieved its goal: a place that’s comforting and fulfilling in all corners. That’s never more evident than when you see the outdoor couches full of diners wrapped in blankets, shoveling cast iron chicken with radicchio into their mouths. Yet Huck’s has one more surprise up its sleeve and it’s the most upending one of all. This really isn’t a restaurant at all. It’s a straight-up bar. True, only ten of its seats hover around the liquor. True, the menu only features half a dozen cocktails at a time. But it’s also true that Ryan Draine, who’s in charge of the bar, is a fiend when it comes to mixing drinks.

Milk Money started out with a complex approach to cocktails, so there is some precedence here, but Draine comes out guns blazing, each drink often a concoction of at least two types of booze and eight ingredients. It’s a veritable flea market of bitters, herbs and eggs and, frankly, everything appears totally discordant on paper. Gin, sake, vermouth and prosecco in a glass mixed with lemon, lilac and passionfruit? Vanilla rum, sherry and gin swirled with cranberry, clove, orange and honey? Whose alcoholic freakshow is this and why are any of us here? Watching any of them being built is a science experiment — so much so that even a seasoned diner sipping pinot at the bar blurts out, “This is some seriously cool sh#t.” And it is.

If Twain set out to do anything with his half-hearted rebel, it was to overturn the American perspective. And though we sometimes barely register the role of drinks in the nightly dining ritual, Huck’s proves just how much we’re missing out. That’s not to say the bar fully eclipses the dining room but, under an audio cloud of Otis Redding and Van Morrison, it articulates the happy haze of enjoying what you didn’t think you wanted. Leave it to an outpost in a corner garage to prove the expanse of the American Dream.

4654 Post Rd., Warwick/East Greenwich line, 471-7170, hucksfillingstation.com
Open daily for dinner, Fri.–Sun. for brunch. Wheelchair accessibility is a challenge indoors but the patio is easy to negotiate on wheels. Small parking lot; also street parking.
Cuisine Southern fare opens its arms wide.
Capacity Thirty-six indoors with another thirty-five on the patio.
Vibe The bar of your dreams with a menu to match.
Prices $4–$38.
karen’s picks Cornbread, whole roasted fish, gnocchi with duck confit, Statler chicken and every damn cocktail on the menu.