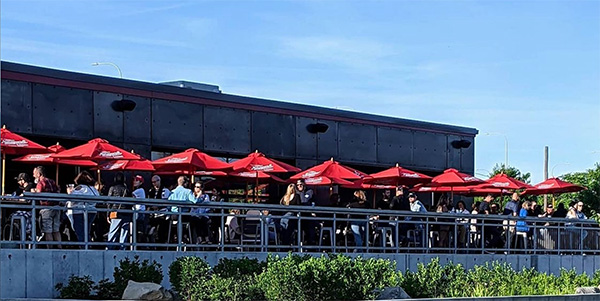 The craft brewing scene in Rhode Island is known for being close-knit, and that mutual support often extends across state lines.

On Monday, February 21, Narragansett Beer in Providence will host a fundraiser for Anawan Brewing Company, the Rehoboth brewery that lost everything in a devastating fire over the weekend. Owner Steffen Johnson had just opened the brewery in December and operated it for a little more than two months before the fire destroyed the premises along with those of several other businesses in the building.

“As I am sure all of you have heard by now, our community-based brewery dreams which started at an outpost pulling night guard in Afghanistan in 2014 has gone up in smoke,” Johnson, an Army veteran, writes on Facebook. “In a matter of [approximately] five hours, what took us all five years to build, has burnt down to rubble. As I am writing this from my phone (we lost our computers in the fire), I am still at a complete loss for words and in total shock.”

Narragansett, which opened its Providence brewery in the city’s Fox Point neighborhood last summer, has committed to donating 100 percent of Monday’s proceeds to Anawan to help them rebuild. That includes draft beers, can sales, merchandise and food at the Providence location. The brewery is open from 3 to 10 p.m. on Monday and is located at 271 Tockwotton St., across from India Point Park.

Other breweries have also rallied in support of Anawan, with several donating funds or announcing plans for special fundraising brews. As of Friday, a GoFundMe page for Anawan had raised more than $31,000.

“While this is an extremely dark time for all of us at ABC, we are forever grateful for all of the love and support we have been receiving. There is a light at the end of this tunnel and that has been keeping us all positive,” Johnson writes.

Johnson began working on the business plan for the brewery with friend and head brewer Dan DiRienzo several years ago. The fire broke out in the commercial building at 7 Park St. in the early morning hours of Saturday, February 12.