The ultimate guide to beer and breweries in the Ocean State.

Champagne taste on a beer budget is now a moot point, since craft brews are getting fancier and spendier too. It was only about ten years ago when we could count the number of breweries in Rhode Island on one hand, but now the Ocean State boasts thirty-six and climbing. Use our guide to learn about our local brewers and plan your own beer-focused Rhode trips. 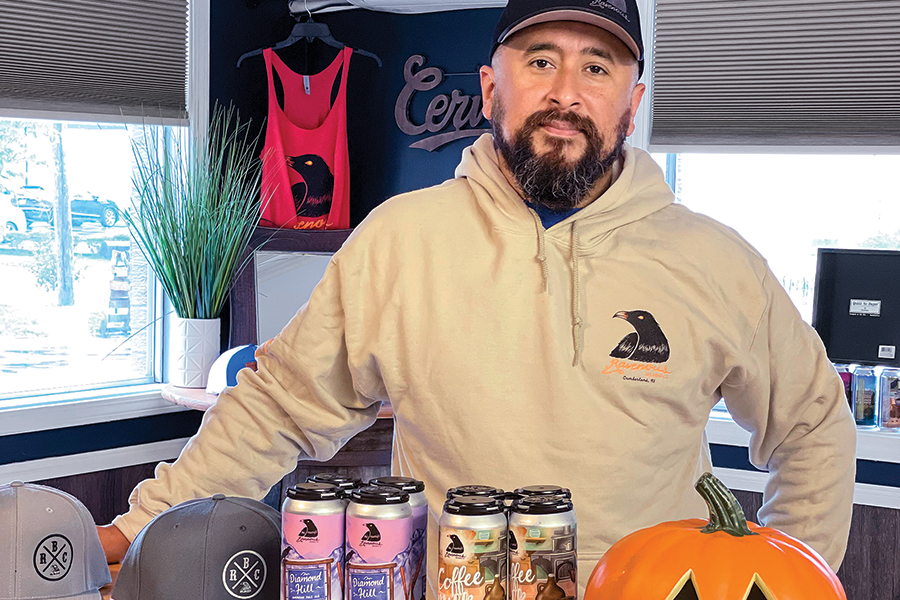 Dog-friendly (outside only), outdoor seating, family-friendly (before 6 p.m.)
Former police officer and proud Latino Dorian Rave started his brewery in Woonsocket right when the craft beer boom hit Rhode Island in 2012. He was also the first to come up with the hoppy homage to Rhode Island coffee milk, the Coffee Milk Stout. He moved his space to a larger industrial setting in Cumberland that produces slightly less than 1,000 barrels a year with partner Patrick Reilly helping to stay the course. Ravenous continues to pay homage to the raven, a play on his last name and a tribute to a ravenous bird that symbolizes the brewer’s thirst for knowledge and creativity. The brewhouse features corn hole and bumper pool and can be rented for private parties, and it also has an outdoor patio frequently visited by food trucks.
What to drink: There are lots of hazy, hint-of-fruit-flavor New England style IPAs from which to choose, but you have to try the original Coffee Milk Stout to earn Ravenous clout. The Bienvenu Red and Leroy Brown appeal to non-IPA lovers.
10 Industrial Rd., Cumberland, 216-5331, ravenousbrewing.com

Dog-friendly (outside only), outdoor seating, family-friendly.
Beer On Earth’s funky, art-forward tap room is ideal for those with both a discerning eye and discerning taste. A bright blue wall behind the bar proudly displays the names of brews on tap while ready-to-take-home cans adorned with imaginative labels (dreamed up and illustrated by local artist Paul Endres Jr.) fill a fridge across from fermenters. Set in the beer mecca that is Providence’s West End, the microbrewery also boasts prime open-air seating beneath atmospheric bistro lighting.
What to drink: Try the Marzanna, a Baltic porter featuring a toasty malt aroma with notes of toffee, nuts  and molasses and flavors of chocolate and coffee; the Temple of Plenty, a light golden German lager with subtle notes of honey and almond; or the New England Gothic, a New England Double IPA dry-hopped with Vic Secret and Citra hops.
425 West Fountain St., #104, Providence, beeronearth.com

Dog-friendly, outdoor seating, family-friendly.
This nanobrewery has a block party vibe, nestled into the Lorraine Mills next to White Dog Distilling with easy access to another neighbor, Ming’s Asian Street Food, which is opening a fried chicken sandwich bar. Around the corner is Ja Patty, a kitchen serving Jamaican cuisine  on nights and weekends. The Crook is best known for brewer and co-founder Nichole Pelletier’s inventive beer varieties that incorporate audacious ingredients and unusual flavors like pineapple in its Hawaiian Porter and strawberry, chocolate and vanilla notes in the Neapolitan Brown Ale, coined the “ice cream beer.”
What to drink: The Pumpkin Maple Ale, made with pumpkin, maple and pumpkin pie spices, is always popular, as is the seasonal Eggnog Milk Stout, released on the night before Thanksgiving. There’s no eggnog in it; it’s a milk stout brewed with cinnamon and nutmeg. 560 Mineral Spring Ave., Pawtucket, 473-8312, crookedcurrentbrewery.com 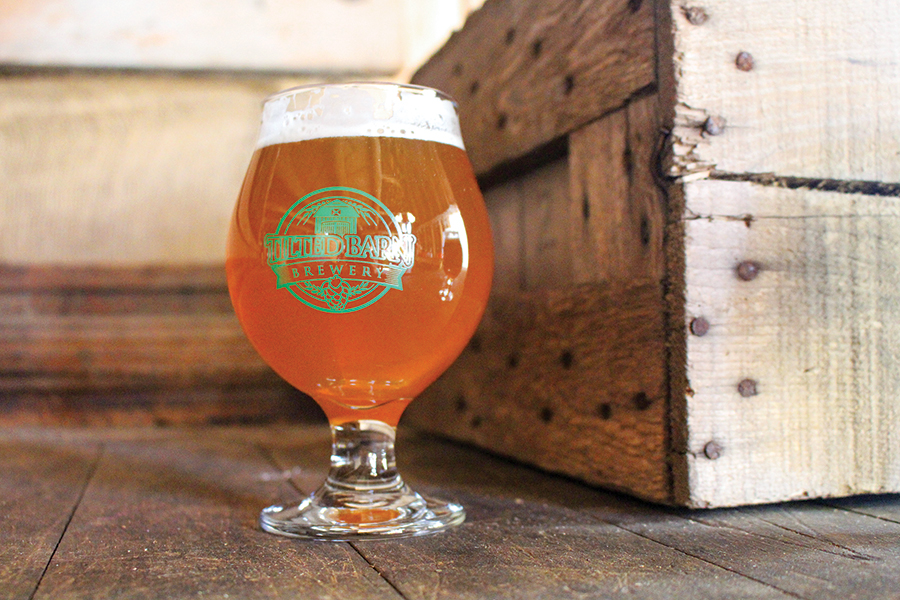 Outdoor seating, family-friendly.
Tilted Barn Brewery has come a long way since its initial launch as Ocean State Hops farm and then Tilted Barn tasting room in its century- old, charming, lopsided barn. Owners Matt and Kara Richardson had a new post-and-beam barn constructed on the hill that overlooks the Christmas tree farm, climbing hops vines and roaming donkeys with a view of the much-loved namesake barn in the background. The thirty-barrel brewhouse and tasting room has plenty of lawn for exploring, outdoor seating and a patio that’s frequented by food trucks. There’s first-come, first-served seating inside and outside where there are up to twenty-seven options on tap, combined. The brewery is family-friendly (but no dogs), and you can bring your own chairs  and blankets and find a spot on the grass for a picnic.
What to drink: Late fall is the time to get the Blackjack Pumpkin Stout made with pumpkins grown on the farm. They also released a Czech- inspired Dark Barn Lager called Is This Still Lawn Boy?, made with yeast from the Barn Lager and Lawn Boy and named after a Phish album.
1 Helmsley Pl., Exeter, 500-6765, tiltedbarnbrewery.com

Dog-friendly (outside only), outdoor seating, family-friendly.
The classic brick wall acts as your backdrop while you sample flights filled with beer or housemade seltzers on tap. Take your drinks outside to the patio and play games like cornhole alongside friends — human or four-legged. The owner of Lops Brewing, Sean Lopolito, brews right below your feet; production of Lops’ beers occurs in the basement, containing a Blichmann 3.5-barrel electric system and four fermenting tanks. Bring home some canned brews to-go as well as merch like hats, shirts and snifter glasses to rep the nanobrewery.
What to drink: From Lops’ ever-rotating selection of beverages, catch the Star Hazing NEIPA, Marshmallow Stout or the Pumpkin Spice Ale in honor of the fall season.
122 North Main St., Woonsocket, 616-0520, lopsbrewing.com

Dog-friendly, outdoor seating, family-friendly.
The West End is a craft beer haven with Beer on Earth across the street and Bayberry Beer Hall down the block. Moniker has a contemporary indoor space designed with beautiful wood murals, local art on the walls and sliding garage doors alongside both communal and intimate seating nooks. Outdoors, the newly renovated front and side beer garden crosses all seasons with seasonal outdoor heaters, picnic tables and takeout dining options, often available on site through mobile vendors (or you can order takeout and delivery from anywhere you choose).
What to drink: The lager and pilsner are sessionable and strong (in quality not potency; they clock in at 4.7 and 5.5 percent ABV, respectively). These German classics rotate along with hoppy IPAs, but Moniker also offers seasonal beers like the Marzen, Bourbon Barrel-Aged Maple Porter and Smoked Spiced Pumpkin Ale.
432 West Fountain St., Providence, 648-0150, monikerbrewery.com