The ultimate guide to beer and breweries in the Ocean State. 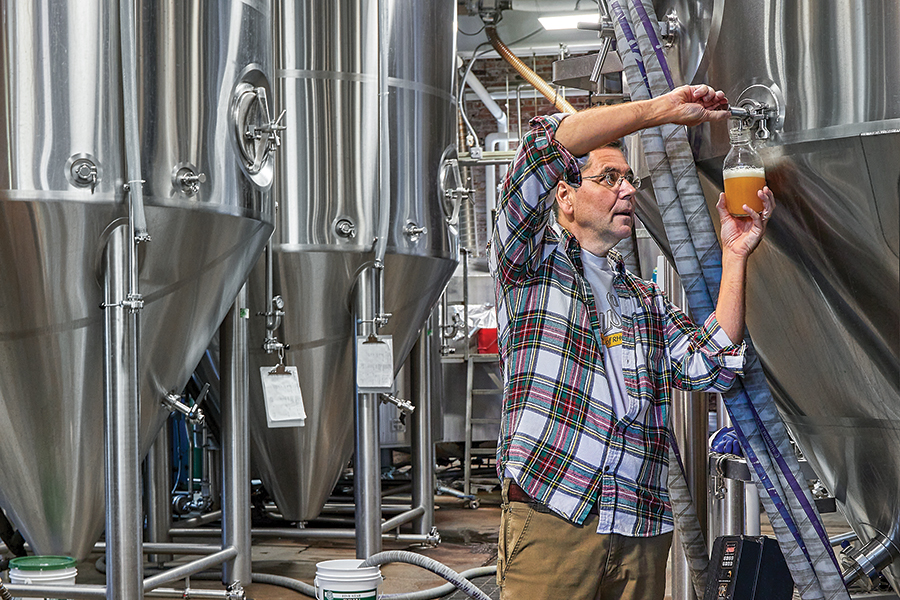 Dog-friendly, outdoor seating, family-friendly.
Grey Sail Brewing is inspired by New England beaches and the gray sails that dot the horizon. Fueled by a passion for brewing, owners Alan and Jennifer Brinton took over the former Westerly Macaroni Factory (circa 1929) in 2011, bringing back grain to the building once again and eventually converting it into the thirty-barrel brewhouse we know and love today. In addition to brewery tours, patrons can enjoy their libations within the homey tasting room next door or out in the attached, pup-friendly beer garden, complete with picnic tables, cornhole, snacks and frequent live music.
What to drink: Grey Sail’s mainstays like Captain’s Daughter (double IPA), the Flying Jenny (pale ale), the Flagship (cream ale) or the Dave’s Coffee Stout, but also be on the lookout for the Keg Nog (a holiday milkshake IPA) and the brewery’s limited tenth anniversary beer. There’s also another alt-prop brewery on the premises, Hive Beer, which rents space at Grey Sail and donates 1 percent of its beer sales toward honeybee research and preservation.
63 Canal St., Westerly, 212-7592, greysailbrewing.com

Dog-friendly (outside only), outdoor seating, family-friendly.
The late Proclamation Ale founder, Dave Witham, left a legacy in his place with his wife, Lori, at the helm of the brewery that he started in 2014. The female-forward Proc team keep pushing styles to new levels with beyond-the-norm beers like Diner Pie, a key lime pie-inspired sour  ale made by adding graham crackers to the mash and fermenter, and key lime and vanilla during fermentation. The brewery has a 2,000-square-foot barrel aging and wood cellar for sour and mixed fermentation ales. The kid- and dog-friendly atmosphere at Proclamation includes visits from various food trucks, retro arcade games, a tasting room highlighting art installations, an outdoor patio and occasional women-empowerment and specialty beer-themed events.
What to drink: Brewin’ in the Boys Room, a collaboration California Common brew created and brewed by women from Proclamation, Grey Sail and Crooked Current. Derivative is the ever-popular single-hopped pale ale, and the sours made with seasonal fruits are always amazing.
298 Kilvert St., Warwick, proclamationale co.com

Dog-friendly, outdoor seating, family-friendly.
Sip brews outdoors in the tented beer garden overlooking sprawling farmland, distant water views and a chicken coop full of “attack chickens.” Owners Matt and Katie Gray launched Ragged Island five years ago in a Portsmouth industrial building. That location has since closed to focus on the thirty-seven-acre farm’s future plans, which include planting fruit trees and berries, creating pick-your-own plots and growing hops that will be incorporated into the beers. The Grays are also renovating an existing red pole barn and farmhouse for its ten-barrel brewhouse (the barn) and tasting room (the house).
What to drink: Ragged Island is most known for its IPAs and Double IPAs, including Hoop House with notes of stone fruit.
54 Bristol Ferry Rd., Portsmouth, 318-2991, raggedislandbrewing.com

Dog-friendly, outdoor seating, family-friendly.
This is the spot to get over a breakup. All kidding aside, Rejects Beer Co. was named after the surfer hangout, Rejects Beach in Newport, a stretch of sand claimed by those who can’t get into the private Bailey’s Beach. The space features an ’80s basement hang-ten vibe with retro video games like Pac Man and Nintendo available to play for free and other games that require a few quarters. It’s family friendly with coin-operated prize dispensers, pinball, cozy nooks and communal tables, plus outdoor views of Easton’s Pond. Order Mexican takeout online from neighbor Diego’s Barrio and Cantina for delivery right to your table. Then stake out the top deck for sunset dinner views over brews.
What to drink: The Pina Colada Sour Ale is outstanding with pineapple and coconut notes. Hop-heads will love the New England IPA Twelve O’clock High, and there’s  even a housemade Mexican Paloma hard seltzer with a hint of grapefruit.
124 Aquidneck Ave., Middletown, 619-8200, rejectsbeerco.com

Dog-friendly, outdoor seating, family-friendly.
This two-barrel nanobrewery walks the dog-friendly walk. It’s actually named for a six pack of canines the owners loved over the years, rather than a six pack of beer. The brews are named after Penny (peanut butter milk stout on nitro), Ollie (grisette), Lenni (Czech pilsner), Sheldon (American IPA), Elliott (pomegranate sour ale) and Timmy (American DIPA), plus there’s a tap for the newest member of the family, Jake (coffee stout). Sixteen-ounce cans and pours from eight drafts are available at the brewery, which offers dog-friendly indoor, patio and biergarten seating.
What to drink: There are eight brews on tap with a variety for every taste. Look out for new brews named after guests’ dogs. Bring your pup and maybe a brew will be named after them too.
87 Gooding Ave., Bristol, 200-8592, 6packbrewing.com

Family-friendly.
Smug Brewing in Pawtucket has a lot to be, well, smug about. First and foremost, it has veteran Rhode Island brewer Rob DaRosa at the helm creating bold flavors using the highest quality premium barley and grains along with unique and coveted hops from the United States, New Zealand and Germany. It also has spacious digs with a cool, industrial feel where you can imbibe your drink of choice right next to the tanks where it was made. Plus, the brewery is a regular host to an exciting (and challenging, let us tell you) trivia night as well as a regular rotation of local favorite food vendors.
What to drink: Order a flight to get your fill of on-tap offerings. Anything from Smug’s Be Fruitful Kettle Sour series is bound to become your new go-to brew, and don’t miss the Cobra Chai, which is a chai-spiced stout.
100 Carver St., Pawtucket, 642-5701, smugbrewing.com

Dog-friendly, outdoor seating, family-friendly.
Twelve Guns is located on the main drag just outside bustling downtown Bristol, but it plans to move to Warren and build a new waterfront brewery and taproom by summer 2022. The name for the eight-tap brewery comes from the early Rhode Island naval vessel, the U.S.S. Providence, which boasted twelve guns and served in the Revolutionary War under the Continental Navy. The ten-barrel brewery has a communal indoor space with visits from food trucks and popular popups as well as occasional live music and a back beer garden.
What to drink: New fall beer varieties include Chocolate Coffee Blonde Stout, Oktoberfest and a Pumpkin Spice Chai Brown Ale.
549 Metacom Ave., Bristol, 396-9009, twelveguns brewing.com 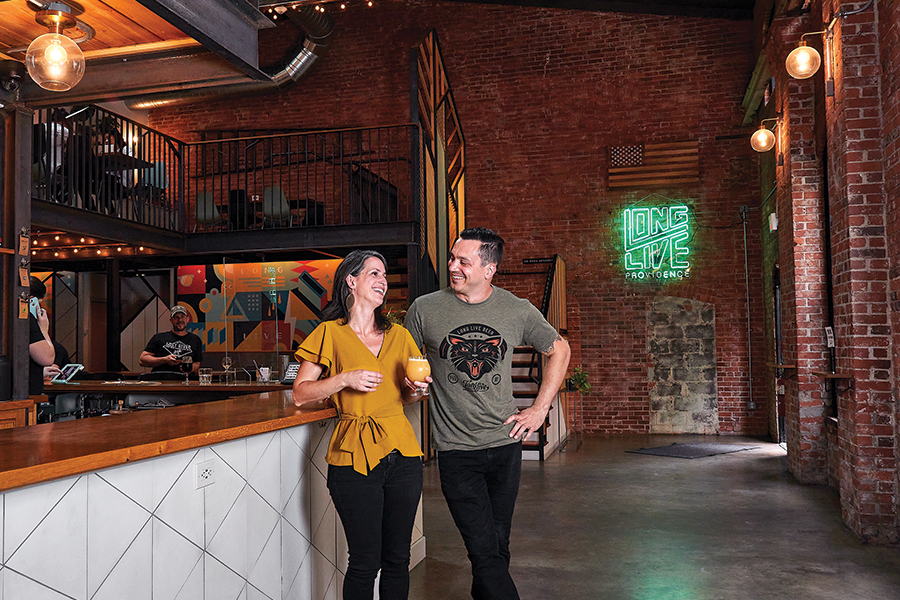 Dog-friendly (outside only), outdoor seating, family-friendly.
Long Live focuses on its taproom experience rather than wholesale brewing of IPAs, stouts and sours. The brewery began with former mason Armando DeDona and partner Jessica deBry, who designs all the art on the cans, in the space where Beer on Earth is now located. It moved on to a bigger location in a former mill next to the Rooms and Works complex in Providence. They also have a partnership with popup food business Solid Gold Provisions, which builds made-to-order craft sandwiches and serves fare onsite often during taproom hours, but the brewery is also visited by food trucks.
What to drink: Known for its fruit-forward New England-style IPAs and coveted collaborations with other respected New England breweries and businesses. For fall, try Armando’s Breakfast, an Imperial stout aged in bourbon barrels with maple syrup and coffee as well as the Friendsgiving beer collaboration with PVDonuts.
40R Sprague St., Providence, longlivebeerworks.com