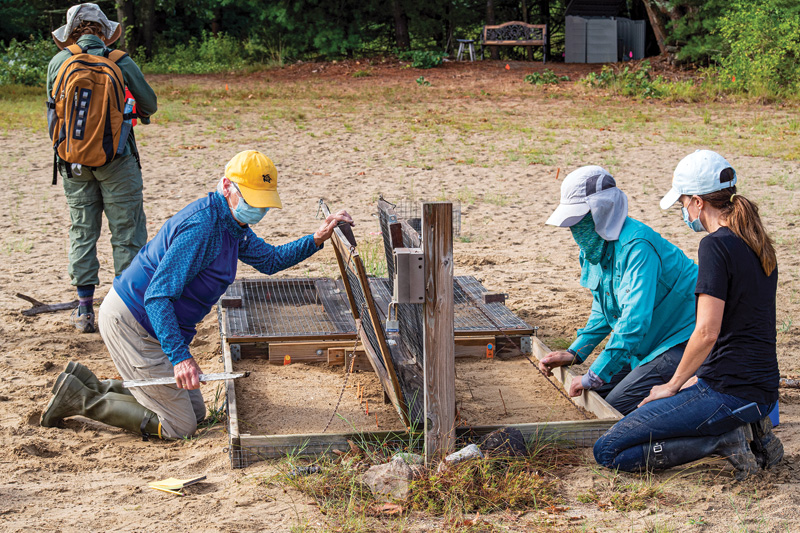 A Barrington native, Sornborger had been a zoology major in college and taught science on and off while raising her family. But she didn’t have any particular interest in turtles. “We were doing something positive to try to save an animal,” she says. “It happened to be about turtles, but it could have been anything. I didn’t know one thing from another when I started.”

It didn’t take long, however, before she became a diamondback terrapin expert. Sornborger attended terrapin conferences, consulted with scientists at Hofstra University and Wheaton College.

“After a while, you develop a relationship with the turtles, whether you want to or not,” Sornborger says. “Certain individuals you get to know. One would come up to nest and I’d know it was turtle 275, or whatever, because I’d seen them for so many years.”

Unlike the current team of nearly three dozen volunteers, Sornborger and McCalmont initially did much of the work themselves, though most years they hired a couple of interns, usually from Barrington High School.

“The kids were a big part of it,” she says. “Not only could we use the help, but it was important that the local people know about the turtles.”

For thirty years, Sornborger was the face of the project – featured in news reports, meeting with DEM officials, making presentations to community groups, and responding to uncounted inquiries, always with childlike enthusiasm about the turtles she grew to love.

“The secret to the success of the project was Charlotte,” says McCalmont, seventy-seven, who taught at Providence Country Day School for thirty years. “When she takes on a job, she sticks with it. Having that consistency with the project has been important.

“She has a deep understanding and appreciation for science,” he adds. “She’s very meticulous and relentless. In that regard, she was a great partner and model for me. If you say you’re going to do something, you’ve got to be there and do it. She also has a great personality and is a great educator. She has a ton of strengths.”

But as she approached her mid-eighties, Sornborger knew it was time to pass the baton. She made plans to move to western Connecticut to be closer to her family, which meant finding new leadership for the terrapin project.

“I’d been looking for somebody to take over this project for years,” says Sornborger, who was recognized by the Rhode Island Natural History Survey with its Distinguished Naturalist Award in 2014. “It’s difficult to find people who are dedicated and willing to put in the time and effort. It’s a big commitment, in part because you can’t take any time off during the nesting season. And then Kathryn came along, and she got right into it. And then Madeleine, too.”

Sornborger feels a great sense of pride for the work she did protecting the terrapin population, but she says it wasn’t difficult to step down. It was time. Her last summer of working with the terrapins was in 2019, and as she prepared to move, the town of Barrington and the conservation community gave her a celebratory send-off. She was elected to the Barrington Heritage Hall of Fame in 2020 for her leadership of the project.

On one of the coldest days of the winter, Decker wanders the snow-covered terrapin nesting site with undergraduate assistant Marisa Stevenson. Using an instrument that looks like a metal detector, Decker scans the ankle-deep snow and soil to locate terrapins that hatched last summer and dispersed from the nest last fall. Most didn’t go far, just a few dozen yards into nearby shrubs or along the edge of the forest, though a few made it almost to Hundred Acre Cove, a football field’s length away. The unseen hatchlings, most marked with a pink flag near their hibernation site, have electronic tags attached to their shells that the instrument can detect.

At the first site, Decker reaches the scanner deep into a thicket, and within seconds she hears a distinctive beep indicating that hatchling 3137 remains where it has been since November. A few yards away, hatchling 3176 is quickly detected as well, and several yards further the scanner beeps for hatchling 3157.

The process continues for nearly two hours as the locations of forty-two tagged terrapin hatchlings are confirmed.

“What’s so remarkable is that the hatchlings aren’t very far down in the soil,” Decker says. “They’re able to survive being almost frozen and still come back to life when the weather warms up.”

Wearing similar black parkas, black backpacks and olive pants, Decker and Stevenson confer occasionally about the data that Stevenson is recording or to share a story or two, but they are mostly all business — perhaps because they want to complete the job and get out of the cold as soon as possible.

Stevenson, a Tiverton resident, has only been working with Decker for a month, so she has yet to even see a diamondback terrapin. “This cold work will pay off in the spring,” Decker tells her, “when you’ll finally get to meet the hatchlings.”