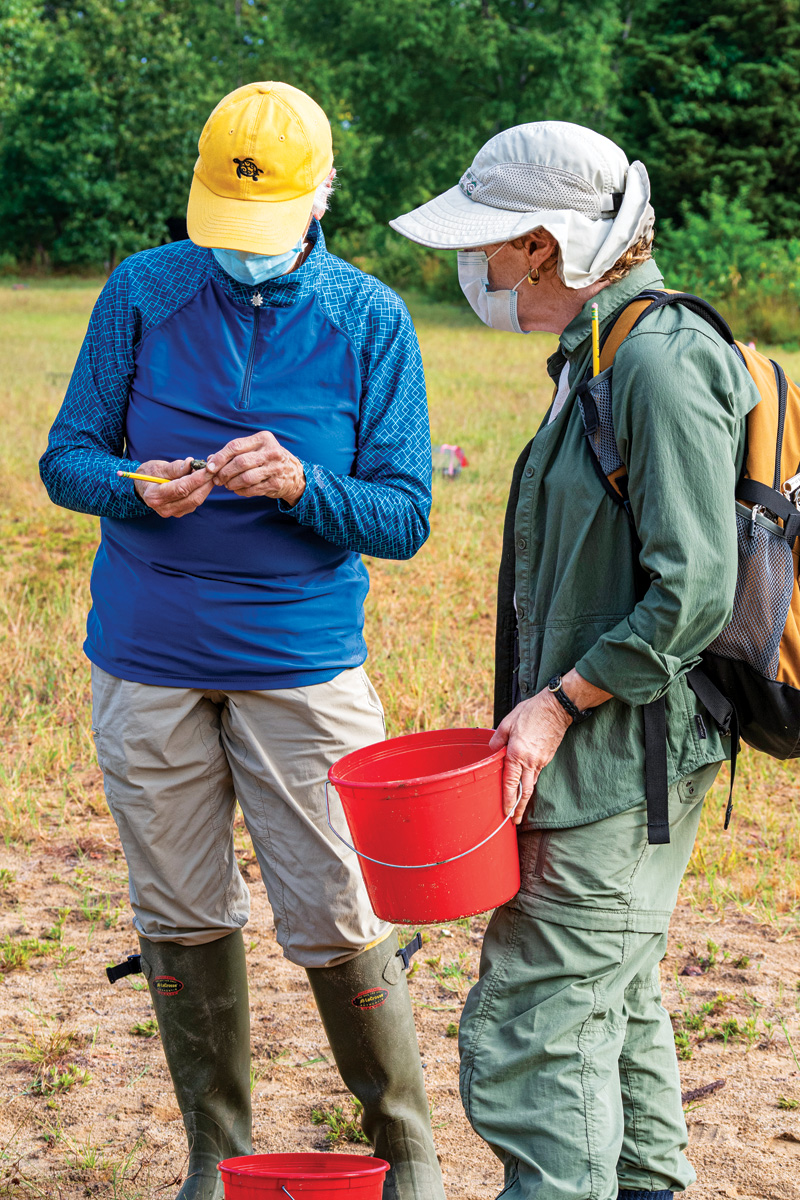 “I think there is a very robust tradition of women taking charge on local projects they care about,” says Carolyn Decker, the URI graduate student studying the terrapin hatchlings. “It’s been really rewarding to have these women as role models in science and conservation. That’s been a huge benefit. And maybe there’s something poetic about us, as women, working to conserve these ecologically important female turtles.”

Knowing of the dearth of women herpetologists, Decker specifically sought a female mentor for her graduate studies, which is how she ended up enrolling at URI and becoming involved with the terrapin project. Decker’s adviser, professor Nancy Karraker, is the scientific adviser to the project.

Karraker says that conservation programs often have more women volunteers than men. Maybe it’s because women live longer, or perhaps because women are more sensitive to conservation issues. “When these groups are dominated by women, they tend to have more of a bottom-up way of making decisions, implementing actions, and being inclusive of ideas,” Karraker says. “I see this in Barrington. Ideas arise organically by all members, people listen, hear and discuss. Kathryn has that approach; she’s open to hearing ideas and doesn’t pretend to know more than everyone else.”

Joining Beauchamp in leading the terrapin project are Peter McCalmont, a three-decade volunteer and one of the few men involved, and Madeleine Linck, a retired biologist who studied reptiles and amphibians in Minnesota for thirty-one years before moving to nearby Rehoboth to be close to her grandchildren. Although she had studied turtles for many years, Linck knew little about diamondback terrapins until being invited to volunteer in 2017.
“I like learning about new species and their life cycle, and I found it interesting that the terrapins use the estuaries. They’re not sea turtles, but they still use the marine environment,” says Linck, seventy-four. “I also liked that it was a new challenge, and I was meeting new people.”

With her scientific background, Linck is familiar with turtle research and has shared insights she has gleaned from the scientific literature, like a recommendation to install electrified fencing around the nesting area to keep predators like skunks and raccoons from digging up the eggs. She also has experience protecting nesting habitat for spiny softshell turtles in Minnesota, so it didn’t take long for her to fit right in among the
Barrington volunteers.

“With turtles, nesting habitat is usually in short supply because humans have overdeveloped everything,” she says. “The terrapins probably had a lot more choices of where to nest before we built all our homes and jetties and everything humans do. Yet despite being in a somewhat urban area, these animals are still thriving.”

The terrapins are thriving in large part due to the inspired work of Charlotte Sornborger, eighty-five, who led the Barrington terrapin project for its first thirty years. Along with McCalmont, she launched the monitoring program in 1990 soon after the terrapin population was discovered by local naturalist Doug Rayner. Sornborger was president of the Barrington Land Conservation Trust at the time — a post she held for seventeen years — and when she learned about the terrapins, she thought their presence might help the organization’s efforts.

“We were trying to save some land across the cove, and the case went to Superior Court,” she says. “We had to have scientific evidence that the cove was important, so we decided to find out more about the turtles. I would have done anything to save land in town, so when Doug suggested doing it, I said ‘why not?’ Pete joined in soon after.”