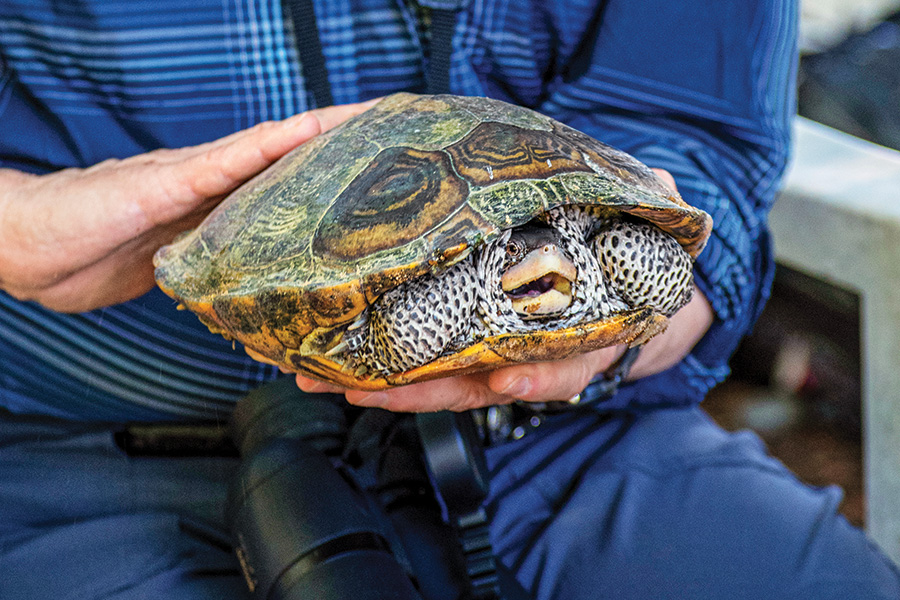 As soon as the sun comes up, rare tutrtles begin to arrive at a sandy bluff overlooking Hundred Acre Cove in Barrington. Two emerge simultaneously from the forest edge and wander around looking for the perfect nesting site. Three more appear in an adjacent field and quickly begin digging five-inch-deep holes in which to deposit their eggs.

The diminutive turtles, called diamondback terrapins, kick sand over themselves to camouflage their appearance, then dig a flask-shaped nest with their hind feet. When the hole is the right size, each turtle lays about fifteen eggs, covers them with sand and departs. The whole process takes about twenty minutes.

Hidden nearby in a small grove of trees they call the office, a team of volunteers and biologists — nearly all of them women — watch until the turtles are finished laying and begin to return to the marsh below. But before the terrapins can escape, the volunteers collect each one for processing, which involves measuring their shell, marking them so they can be recognized later and, in some cases, tagging them for future research. The turtles are then released to return to the cove. Each nest site is also flagged and covered with an exclosure, a wire basket-like device to keep predators from accessing the eggs. One of the terrapins collected on this June day was first identified in 1990, the first year of this monitoring effort, making her more than thirty years old.

Overseeing this complex project is Kathryn Beauchamp, seventy-three, a retired nurse who spent most of her life caring for children in the intensive care units of hospitals in Providence, Boston and a half-dozen other cities around the country. With a few kind words, she instructs new volunteers about the procedures, encourages visiting students to participate, educates unwitting walkers who traipse through the site oblivious to the terrapins, and answers questions with a pleasant smile. When a terrapin is brought to the office, she demonstrates proper turtle-handling technique and walks newcomers through the processing steps so they can learn to do it themselves. Despite directing the operation with military precision, her tone is always welcoming. No one is ever left out.

“My friends jokingly say that I transferred my love of taking care of children to taking care of turtles,” says Beauchamp. “I’ve always been very interested in nature, birds and gardening, and this seemed to fit right in. Once you get involved, it’s so heartwarming to see everyone working together to protect this turtle.”

Beauchamp started volunteering on the terrapin project in the spring of 2017, just a few months after her retirement, and within two years she was transitioning into a leadership role.

“It’s all about maintaining this species in Hundred Acre Cove,” she says. “With climate change, we’re watching the cove change. The islands of the marsh are slowly breaking apart and shrinking with the higher and higher tides, and the turtles need that marsh.”

Named for the diamond pattern on their shell, diamondback terrapins were discovered nesting at Hundred Acre Cove in the 1980s after not being seen there for more than twenty years. It was the only site in Rhode Island where the turtles were known to breed. Ranging along the East Coast from Cape Cod to Florida and around the Gulf Coast to Texas, it is the only turtle species in the United States that spends its entire life in brackish coves, lagoons and salt marshes, an anomaly between the sea turtles and freshwater turtles. Although a few additional breeding sites in the Ocean State have been discovered in recent years, the Barrington terrapin population remains the largest in the region by far, and scientists speculate that some of the newer breeding sites were started by turtles that dispersed from Barrington. Because of the species’ rarity, the volunteers collaborate with scientists from the University of Rhode Island (URI) and the Rhode Island Department of Environmental Management (DEM) to monitor, protect and study the turtles as part of a comprehensive conservation effort.

“Last year we had thirty-two volunteers, most of whom just landed in our lap,” Beauchamp says. “We had more visitors to the refuge than ever because of COVID, and we stopped many of them to tell them about the project, and some joined as volunteers. So we had plenty of hands on deck, which we needed because on our peak days, the activity doesn’t stop.”

The team observed eighty-two terrapins nesting on the peak day last June, and 237 individual turtles were identified during the two-month breeding season, many of which nested multiple times. A total of 117 nests were protected by exclosures, resulting in 1,453 hatchlings emerging from their eggs. But an additional 407 nests were unprotected and destroyed by predators because not enough exclosures were available or because no one saw those turtles laying their eggs. In 2019, just sixty-eight nests were protected because fewer volunteers were available to watch for them.

“To see those hatchlings emerge, that’s what drives me; protecting the turtles to see those babies coming out and hopefully surviving,” says Beauchamp. “We’re just giving them a little more of a chance to make it.”

It’s a mystery why women far outnumber men as volunteers and leaders of the Barrington Terrapin Conservation Project. All are welcome. Yet two of the three people leading the day-to-day monitoring activities are women, as is the previous leader, whose commitment to the project lasted thirty years. And although the scientific field of herpetology — the study of reptiles and amphibians — is overwhelmingly dominated by men, the scientific adviser to the Barrington project and the graduate student and assistant presently conducting research at the site are all women. Most of the newest volunteers are, too.