Federal Hill Pizza's Billy Manzo Jr. is one of only two American-born master pizzaioli in the United States.

Rhode Island is home to one of only two American-born master pizzaioli in the United States. The backstory of Federal Hill Pizza’s master pizzaiolo Billy Manzo Jr. is one for the Hollywood reels too. The Providence-born-and-raised chef has a frenetic, contagious energy of someone half his age, and he’s earned a reputation as a “mad man” when it comes to learning everything there is to know about the science of pizza. His arms are marked in full sleeves of dozens of colorful tattoos, many of them pizza-themed (but none on his legs; nevermind the fact that he’s always wearing shorts, even in winter). He’s jetted off to Italy and Las Vegas, representing Rhode Island and his brand as a cornerstone in the international world of pizza. 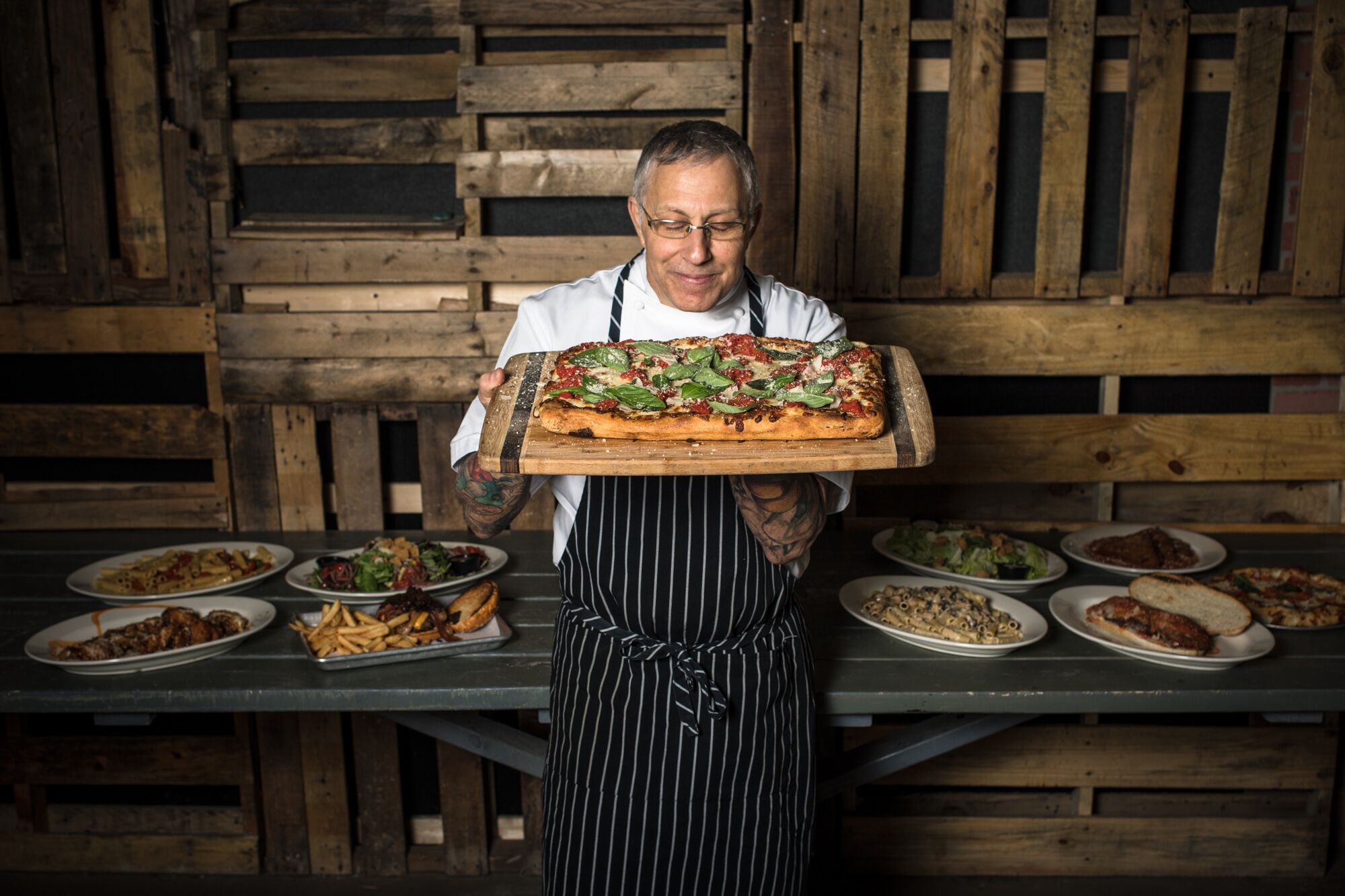 Manzo started out at Paramount Pictures doing production work and acting in movies like Casino (he was one of the dead guys on the floor in the movie). Then he headed back home to Rhode Island in 1995-96, when he opened a cigar shop, Sikar Lounge and Cafe, on Providence’s Federal Hill. The shop sold cigars and cognac and gave people a place to hang out for more than ten years before Manzo made his first foray into the world of food.

“The state really started coming down on me because I was doing just cigars and cigarettes,” Manzo say. “No Cubans. Wink, wink, nod, nod.”

When prodded, he admits he was “the guy,” tracking cigars down through Canada to Cuba and back home. But customers wanted more than just smokes. They wanted food. He thought about his background in cooking and how it put him through school. There were times when business was slow that he’d go next store to the now closed Blue Grotto, and mess around in the kitchen with the chefs who became his friends.

“One thing led to another. I did a hot dog, I did a hamburger, then my mother and father said to me didn’t you do pizza at one time?” Manzo says. “I said, ‘Mom, you don’t understand, you need a pizza oven, then you gotta buy flour, and you gotta do this and that.’”

It was 2005, and the next thing he knew, he bought an oven at Lowe’s and a box of tiles. Inside his cigar lounge, he’d place the clay tiles upside down in the oven to recreate a brick oven, and then he’d cook his pizzas made with his special housemade dough on top of the tiles. “The first night I did pizza, I sold forty of them,” Manzo says.

His pizza dough features a special proprietary combination of three or four high quality flours, including Caputo, Le 5 Stagioni 00 flour, Molino Pasini and local, organic multi-grain flour from Maine Grains. The flour combination and high hydration formula makes the dough puff up, creating a crisp exterior that is soft and airy inside. His customers loved the pizza and business took off. Eventually, the pizzeria inside a cigar shop led to launching a wholesale company selling his pizza dough and pizza shells in more than 200 locations throughout Rhode Island, Massachusetts and Connecticut.

During this time of promoting his product, Manzo got to know the international pizza players by traveling to pizza trade shows like the International Pizza Expo in Las Vegas and showcasing his Neapolitan-style pie. First, he was asked by PMQ magazine to participate in the US Pizza Championship in Florida, then he became a member of the World Pizza Champions and competed in various pizza competitions around the globe, including Pizza Olimpico. It all eventually led to attending and graduating from two pizza schools in Italy, Accademia Pizzaioli and the Scuola Italiana Pizzaioli, which certified him as a master pizzaiolo. Now he’s sponsored by major brands like Galbani, traveling to trade shows and speaking about their products on behalf of the brand. If you meet Manzo, you’ll see his elaborate chef’s coat is decorated with colorful patches representing various Italian and American brands.

When it came time to start a family, and he and his wife, Christine Arvanigian, welcomed their daughter Ani, the couple chose to halt wholesale operations and open their own pizza shop with a real working brick oven, Federal Hill Pizza in Warren in 2010. Manzo’s Neapolitan brick oven specialty pizzas comes in three sizes: twelve-inch, sixteen-inch and, our personal pick, the square al taglio style (though it’s really a rectangle). Manzo loads them up with ingredients like prosciutto di Parma, fresh mozzarella, San Marzano tomatoes and more. My favorite is the Owner’s Favorite with tomatoes, prosciutto, goat cheese and fresh basil. 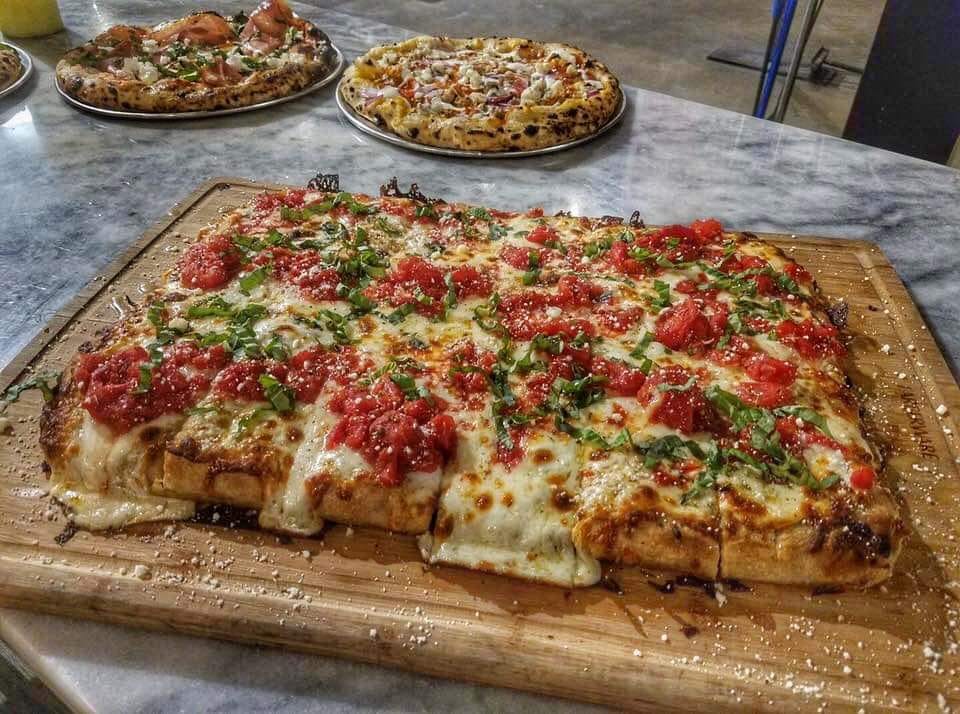 In 2017, Manzo and Arvanigian opened a second Federal Hill Pizza location in Providence, inside the historic Castle Cinema, which took the family two long years to renovate and bring the treasured property back to its glory. People stop by the pizza shop all the time to reminisce about the good old days at the theater.

Was it a labor of love?, I asked. “It was a labor of torture,” he says with a laugh.

The place means a lot to Manzo because it’s in the same Mount Pleasant neighborhood where he grew up. He spent a lot of time at the theater as a kid making memories and now he’s making new memories there with his own family. It’s a restaurant that also hosts charity benefits for local organizations, including his own nonprofit Chefs Feeding Kids, a 501c3 that involves professional chefs and restaurant owners who believe all children should have enough food to eat, and they give the kids the opportunity to learn how to prepare nutritious meals.

The Castle Cinema location has two 5,500-pound Gianni Acunto Italian brick ovens that turn out hundreds of pizzas a day. Manzo sure has come a long way from the cigar shop with a house oven tricked out with tiles, but everyone has to start out somewhere.