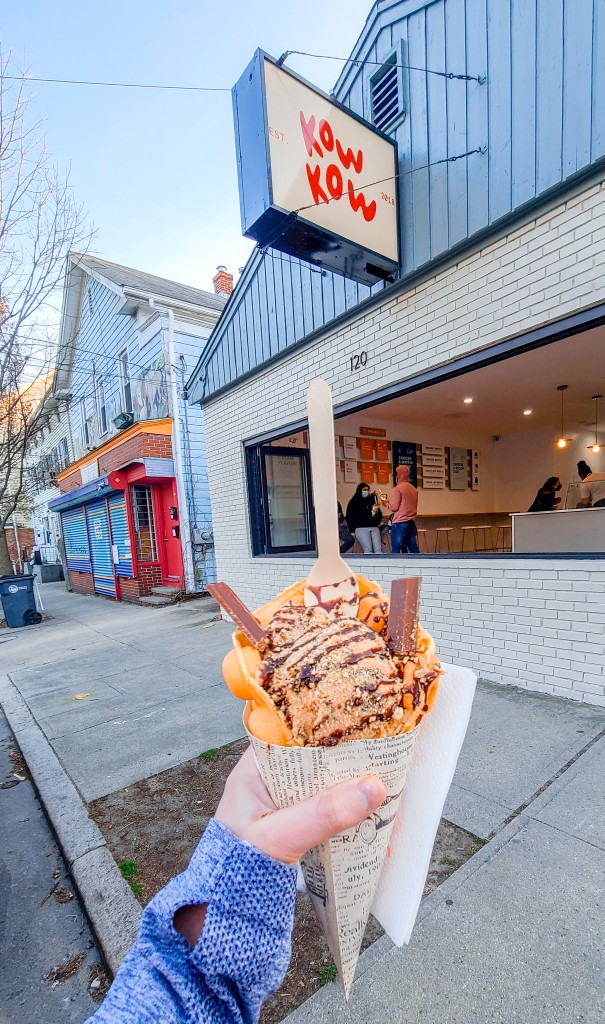 On Saturday’s grand opening, the socially-distanced line outside Kow Kow in Providence’s Fox Point neighborhood wrapped around the building. People walked down the block wearing masks and clutching fresh-made bubble waffle cones stuffed with ice cream and topped with treats like Oreos, Kit Kats, strawberries and more making everyone waiting in line all the more jealous. The only drawback was, they couldn’t wait to dig in. It was beyond owner Vilada Khammahavong’s wildest expectations. For Vilada, who goes by Vi, opening day was also her birthday. “It was a great birthday gift to see everyone lined up,” she says.

Kow Kow first launched as a food truck in 2018. Vi was a pre-med student who decided to pivot from attending medical school to open her own food business. She told her parents what she hoped to do next and they were supportive, but also a tad reluctant and cautious. “My brother is a doctor, and they thought I was going to be a doctor too. They immigrated here from Laos, so it would have been a dream come true for them if both of their children became doctors,” she says with a laugh. “but I wavered away from that.”

On opening day, Vi’s parents were present and they couldn’t believe the popularity of the place. People lined up for bubble waffles with names like Birthday Cake, stuffed with vanilla ice cream and Funfetti cake crumble made by local bakery Whisk Me Away served in a Funfetti waffle; Berry Nutty with black raspberry ice cream, condensed milk drizzle, fresh blackberries and chopped walnuts; S’mores with s’mores ice cream, toasted marshmallow, graham cracker crumble and chocolate drizzle, Oreo Factory with cookies and cream ice cream, Oreo cookies and chocolate drizzle and more. “Now they are very supportive and happy to see how much we’ve grown. Both of my parents work extremely hard, and I just want to give back to them and help them retire,” she says. “Whenever I think about any money I have made from the business, my first thought goes to my parents.”

Vi is a first-generation Asian-American, and she says her mother worked three different jobs and her father also worked very hard and sacrificed to provide for her and her brother. In fact, it was the rare time that they got to spend together as a family that inspired Kow Kow as a business.

Going into Boston as a kid with her family to hunt down bubble waffles is a favorite memory of hers. The waffles are a traditional snack that is popular in Hong Kong. “It was nice to have family time together and we would go to Chinatown for lunch. There was this older woman who still makes bubble waffles to this day. She’s the grandma of bubble waffles,” Vi says. “She was always bouncing around to different locations, and we would always find her.” When an Instagram post showed up on her feed featuring bubble waffles stuffed with ice cream, Vi knew it was a great idea to start a food business like that here.

She had initially wanted to do noodles on the food truck, but quickly realized how hard that would be and refocused on dessert. The bubble waffle and ice cream food truck was very successful from the start and she won a Best of Rhode Island Reader’s Poll award in 2019 for Pop-Up Vendor. In the beginning, it was just her on the truck, taking orders, making waffles, scooping ice cream and topping them with treats, but soon she was able to hire more employees. When the Fox Point storefront became available after a travel agency moved out, Vi knew it was her time to open a brick and mortar.

“It’s a really great location. We jumped on the opportunity because I felt like this was a good spot for us,” Vi says.

She had saved some money and her parents also contributed, but she started a Kickstarter to really get the ball rolling. The fund raised more than $30,000 and she’s been paying back the rewards with invitations to the soft opening, free cones and gift cards that were donated by neighboring Fox Point businesses like Chomp Kitchen and Drinks and PVDonuts.

The storefront has only been open a few days and it’s already a hit with fast-flowing lines forming on the sidewalk even on weekdays. She now has six employees, and they help make the waffles fresh for every customer using tapioca flour, custard powder and local farm eggs. Ice cream comes from Warwick Ice Cream and OddFellows based out of New York and Boston, while vegan ice cream is from NadaMoo. Vi also visits local farms for toppings, like Four Town Farm for strawberries when they are in season. “It’s really important for us to support other local businesses and local farmers because we are all in this together, and we’re in the same community,” she says. 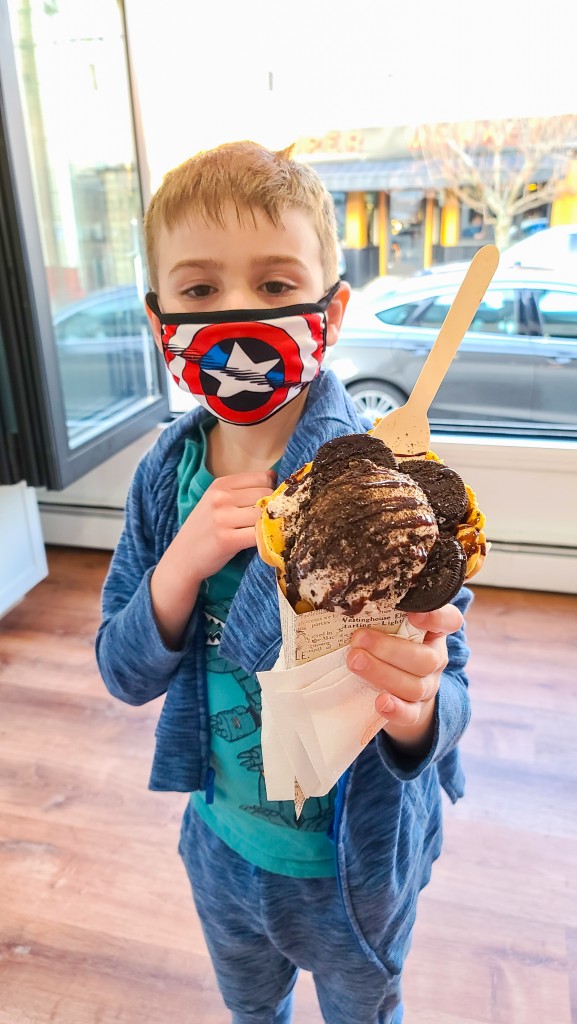 The shop owner incorporates her Lao culture into the business by including Asian ice cream flavors, like Matcha, and the name for it also comes from her culture. Kow Kow means food, and in her culture, people emphasize that something is good by saying it twice. “If something tastes good, we’ll say it’s ‘good, good.’ Because it’s really good,” Vi says.

On opening weekend, Kow Kow raised money for a nonprofit that means a lot to Vi. Ten percent of the proceeds are going to Hate Is A Virus, a nonprofit community of mobilizers and amplifiers that exists to dismantle racism and hate, which started as a movement in April 2020 in response to the rise in hate crimes against the Asian American and Pacific Islander (AAPI) community due to the pandemic.

The organization benefits local communities that have been under attack. “It provides resources to potentially have people walk with elders and helps foster community action,” Vi says. “We felt it was really important, not only because I am a first-generation Asian American, but also because my parents are getting older. The fact that that group of people are being specifically targeted really hits home.”