Home delivery and a direct-to-consumer farm store have helped this beef, pork and poultry farm pick up profits during a crisis. 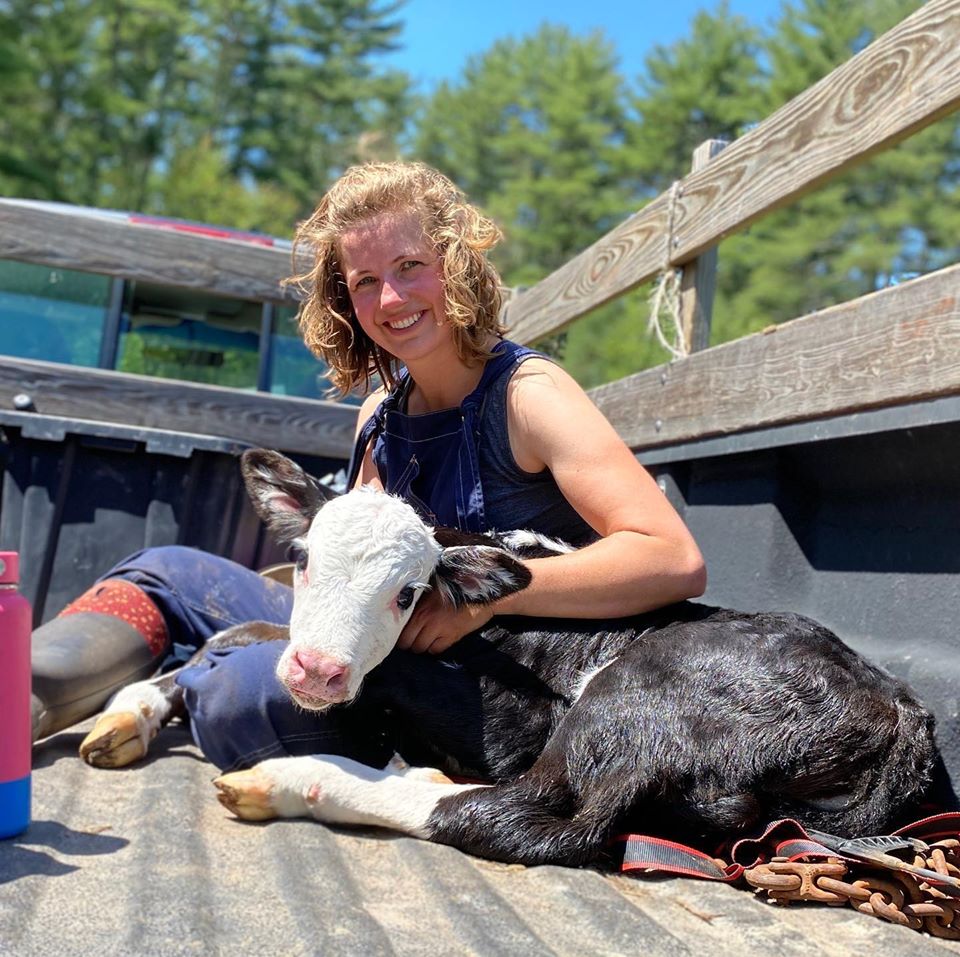 Katie Steere with a calf she named Ruth Bader Ginsburg, but she says “you can call her Ruth or Ruthie or Ginny for short.” Photo from Deep Roots Farm’s Facebook page.

Katie Steere has seen it all as a beef, pork and poultry farmer at Deep Roots Farm. Coyote attacks on entire chicken flocks. Cows that wander away from her land and trample neighbors’ plants. A father who didn’t always agree with her career choice. While trying to bring her family’s shuttered historic Chepachet farmland, founded in 1776, back to its roots, she decided to move her location to avoid family conflict. But steering a business through a pandemic is a whole new level of extreme. Not only did she move many of her animals and rebuild her farm store to reopen on an entirely different farm property at 1265 Snake Hill Rd. in North Scituate during the crisis, but she had to rearrange her business model to account for COVID-19 safety precautions and start a home delivery service on the fly.

However, her efforts at adapting to a new way of doing business have paid off. She’s managed to more than triple her sales through pre-orders and home delivery compared to this time, last year. “Sales are through the roof, but with everyone deciding to raise their own food, I can’t get slaughter appointments, which is scary,” Steere says. “The new farm store has done so well. Most of our sales are through home delivery, but people are starting to come back out in person.”

Ironically, Steere is a former vegan who abandoned her grey cubicle in the Silicon Valley of California to hike the Pacific Crest Trail after watching an inspiring TED Talk in 2015. While she endured the 2,650-mile journey, she had an epiphany and decided to pursue an internship at sustainable meat farm, Polyface Farm, the following year (she had already returned to eating meat after confronting health concerns, but decided she would never go back to the industrial food system).

During the internship, she learned what she would need to know to revive her family’s seventh-generation farm with centuries-old barns and a saw mill that first generated electricity for Chepachet using its water power. She calls it Deep Roots Farm as a reflection of her family’s deep-rooted history to the land. The farm was a former dairy that produced both sweet corn and eggs, while her uncle’s property, also located on the land, raised turkeys. They called it quits in 1977. She didn’t really know what she was doing when she resuscitated the farm, but she dedicated herself to learning what it would take to produce grassfed, pastured-raised beef, pasture-raised pork and chicken and free-range eggs.

“I ordered 200 chicks off the internet, I bought twelve pigs off Craigslist and a few cows from an old farmer down the road. I filed articles of incorporation for Deep Roots Farm, LLC,” says Steere. “And that first winter, I built fences in white-out snowstorms, I almost burned down my chick brooder, and gained the courage to move my cows a half-mile down the driveway by myself.”

And it went well for about two years with Deep Roots Farm running a farm store in Chepachet and selling meat and eggs at farmers markets. But soon, she and her father and uncle realized they all had a different vision for the family farm. Even though the land had sat fallow since 1977 and was well on the path to recovery, Steere decided she needed to move on from the location and start anew.

Steere continued farming her family’s land for awhile and saw the pastures become lush and green, and more families showing up at the farm store to feed their families meat they could trust. “Meanwhile, I could feel my ancestors stirring. I could feel their hope and their whispers of excitement,” she says, but then a new opportunity came unexpectedly.

A little old farmer, Tony, from down the road showed up at her doorstep, and she listened to what he had to say. “He said, he was getting older, he knew he wasn’t going to be around forever, and he had this farm with no kids, and he didn’t want it to go to his neighbor,” she says. Steere put the possibility in the back of her mind, and soon she called Tony and visited the farm.

It seemed too good to be true. And it was. Because when push came to shove, this traditional farmer had unreasonable requests and the cost for access to the land was much higher than she expected. Tony eventually pulled out from the potential lease all together. Steere had to abandon that plan and return to her family farm.

But then she got another call from a different farm that knew about her predicament. She was reluctant to return the call based on what she had just went through with dashed dreams. But she finally talked to the woman, Abby, the farm owner Karen Sherman’s niece. “In true Rhode Island fashion, they had heard through the grapevine that I was looking for a farm. When I realized where it was, I saw it was the farm I had always watched out for on the bus ride to school when I was a kid,” she says.

The new property has twenty-five acres of pasture in North Scituate, big enough for some of her livestock, but Steere can keep her breeding cows at her family’s farmland as long as she doesn’t stay there. “As long as I am not there, it’s okay if my cows are,” she says with a laugh.

Slowly, she and Abby crafted a lease, and built trust. Steere created a new farm stand and moved in. Now her dad helps her with things like digging holes for fence posts and excavating the trench for the water lines for the new well at the property. “It’s a half-sad, half-happy story. I am gutted to [to have left] my family’s farm, because I feel like I am failing my ancestors,” she says. “Yet I feel like my new landowners are literally my guardian angels. My heart hurts for the Tony’s of the world, but it hurts even more for the farms of the world that don’t have someone to steward them successfully into the next generation.”

Pick up Deep Roots Farm products at the farm store or order for Friday home delivery within a thirty-mile radius of the farm. Shop here for pre-orders. The farm store is open Friday from 2-5 p.m. and Saturday from 10 a.m.-2 p.m. (credit cards only, wear a mask and sanitize your hands before entering).

OTHER ARTICLES IN THE SERIES