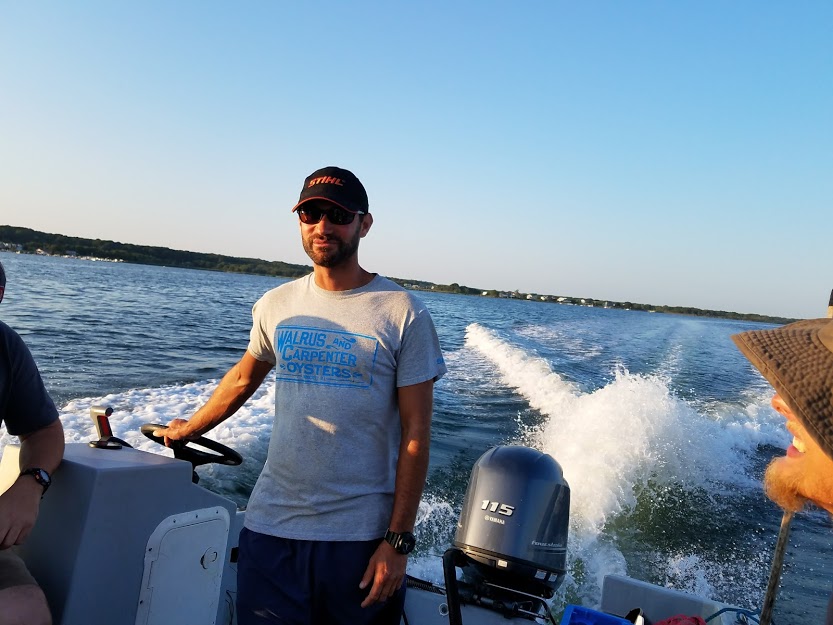 Jules Opton-Himmel, owner of Walrus and Carpenter Oysters, wants you to start shucking oysters at home. Previously, he sold about 98 percent of his farmed oysters – grown in Ninigret Pond in Charlestown and in the bay off Jamestown – to restaurants in Rhode Island and New York City. When the restaurant shutdown took place, he was out of luck with distributing his upscale product to eateries that were trying to figure out how to turn into takeout machines. But he’s already beaten the battle of starting an oyster farm and growing ornery oysters, so he was ready to do what it takes to stay in business, against all odds.

“In early March, we saw the writing on the wall that restaurant sales would go down,” he says. “In a week, our sales went down by 98 percent. That was something we expected from the way things were going, but it was a pretty dramatic and abrupt hit.”

In early March, Opton-Himmel had already hired four more staff members to add to his team of four to assist in the busy spring and summer growing and harvesting season, but he had to immediately pull back from filling the seasonal positions. At the same time, he had to think of a game plan to sell the oysters that were quickly growing larger in their cages, so he could clear the way for the next batch of oyster seed. That’s when he amped up direct-to-consumer sales instead of marketing and selling to restaurants as he had previously done.

He and his team created their own online storefront to sell their oysters by mail order, along with locally harvested wild clams and scallops from their fishermen friends to ship directly to the homes of seafood lovers in New England, New Jersey and New York. Opton-Himmel also connected with Pat’s Pastured beef, pork and poultry farm in East Greenwich to have his oysters be a part of farmer Patrick McNiff’s farm-to-home delivery program, and the Walrus and Carpenter sales manager reached out to Dave’s Marketplace to get Walrus and Carpenter Oysters in the seafood markets of the local grocery store chain. Last weekend, Urban Greens Co-Op Market sold out of about 1,600 Walrus and Carpenter oysters in less than an hour by running a $20 special for a bag of twenty oysters. The shellfish are also available at Fearless Fish Market, and occasionally through the Eddy and Berri restaurant, all located in Providence.

“We had to cut all our prices, but the reality is we have to move our inventory because we need space on the farm,” Opton-Himmel says. “It’s either that or dumping them on the bottom of the ocean.” When the oysters aren’t harvested at their optimal size, they start to get too big, and the oyster farm only has so many cages, leaving nowhere to put the new seed if they don’t clear the oysters that are ready for the raw bar. 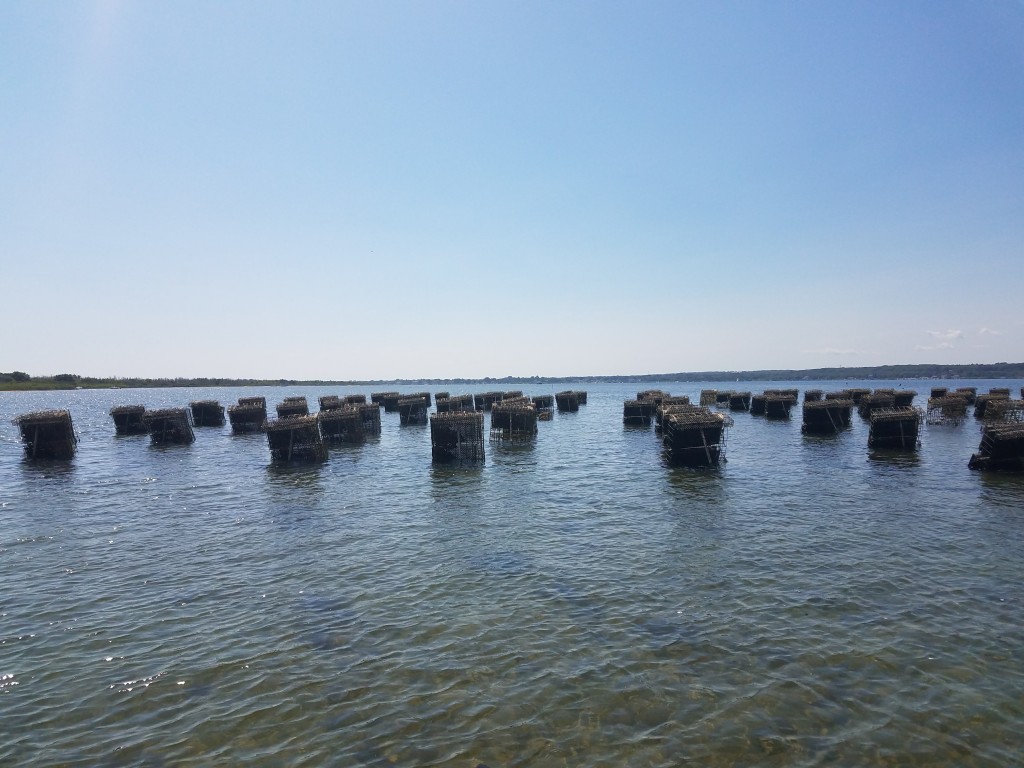 Despite all the challenges he’s faced during the onset of COVID-19, Option-Himmel remains optimistic. He was able to get the Payment Protection Program for his employees’ payroll, and he recently re-hired the four additional people he had planned to bring on in the early spring. “It’s terrifying and exciting at the same time,” Opton-Himmel says. “I’m pretty optimistic we’re going to figure something out and go with it. We’re grateful for everything we have.”

He founded the now successful Walrus and Carpenter oyster farm in Charlestown almost a decade ago, where he grows the “Originals,” followed by a Jamestown extension in more recent years for his “Dutchies.” Running two separate locations, he’s already familiar with unpredictable stress and hardship.

When he was a kid, he showed interest in doing this sort of thing. He always loved learning about the environment, and remembers constructing makeshift dams off a river in the Adirondacks as a five year old. After college, he followed a career in sustainable forestry to find ways to manage our natural resources in a way that wasn’t harmful to the environment. The job ended up being too remote for him as he traveled across the country, so he got a job closer to home at the Woods Hole Research Center in Massachusetts. That job didn’t work out so well either, because he found himself stuck inside working on computers, which simply wasn’t his style.

To keep himself going day-to-day in a job he wasn’t thrilled about, he brought down his boat called Muddy Waters from Upstate New York and he began clamming, fishing and lobstering during his free time. “That’s what kept me going for the eight hours that I had to spend doing remote sensing on a computer,” Opton-Himmel says.

It was then that he learned about sustainable aquaculture, the farming of clams and oysters. He went on to graduate school, but continued to think about ways that he could become an aquaculture farmer on the side. He found a willing partner in a friend, and they began to look for submerged lands that they could lease to start an oyster farm. This led them to Charlestown, Rhode Island, where Dave Beutel, Aquaculture and Fisheries Coordinator for the Rhode Island Coastal Resources Management Council, was completely supportive of their hopeful venture. “He was very encouraging, saying we want young people to come to this state and start these kinds of businesses, and we’ll support you all the way,” says Opton-Himmel.

Walrus and Carpenter Oysters acquired a lease for 1,000 square feet on Ninigret Pond in Charlestown to farm for eighteen months and sell their product. It took several years to get the business off the ground and learn how to grow oysters successfully without killing them. Perry Raso at Matunuck Oyster Farm supplied them with the first batch of oyster seed, which they promptly killed, but they learned a lot along the way. Opton-Himmel eventually realized he needed to farm full-time, and not just do it on the weekends while commuting from New York City. He bought his partner’s half of the business and began oyster farming full time.

As the years went on, he learned more and more about how to grow bigger oysters faster.

“We now harvest twice a week year-round and [in good times, we had distributed] to fifty restaurants throughout the state and New York City,” he says. “I am really proud of our accomplishments, and I have enjoyed every minute of it. The mission of the company is to farm the ocean, restore the environment and to distribute sustainable seafood directly to consumers, which goes back to what I wanted to do when I was a kid.”

The success of Walrus and Carpenter Oysters in Charlestown – now with eight full-time employees for the summer (four positions are seasonal) – led to the leasing of a second location, this time on coastal waters right off the Jamestown Bridge, located in front of several large mansions on the water. Opton-Himmel and crew installed 400 floating cages that immerse his oysters right at the top of the water column, where the most nutrient-rich food flows, leading to bigger oysters that grow much faster than when they are submerged at the bottom of the pond. But the visual impact of these floating cages on the surface of the water caused conflict with the neighbors who did not appreciate the new view from their impressive waterfront properties.

It led to Opton-Himmel getting visited by attorneys and nearly losing the business because so much was spent on legal issues. Ultimately, he found the Young Farmer Network and discovered that the Center for Remediation and Collaboration in Rhode Island was willing to help farmers and landowners in dispute. After going back and forth for quite some time, and with almost no money left for Opton-Himmel, the center set up a mediation session for the oyster farmer and the seven or eight couples that neighbored the Jamestown farm and complained. At the session, they were able to listen to each other and come up with solutions.

“The amazing thing about the experience is with the help of the mediator and being in this safe space where no one had anything to gain to or lose, within an hour and a half, at the end, we were actually talking about how they could help me modify my farm and expand it and take care of their visual problem,” he says.

Opton-Himmel learned from the experience, and has agreed to move his Jamestown site and apply for a new lease. The move is currently on hold due to COVID-19, but will happen in the future.

“What I learned from it is that both sides want the same thing, but they are not being heard or understood, and that’s where the conflict is coming from,” he says. “It had less to do with the economics and the biology of the site, which I thought was the most important thing, and more about how to fit into the community and be a good neighbor and balance those things when we are farming on a public way.”

Learn how to shuck oysters here. 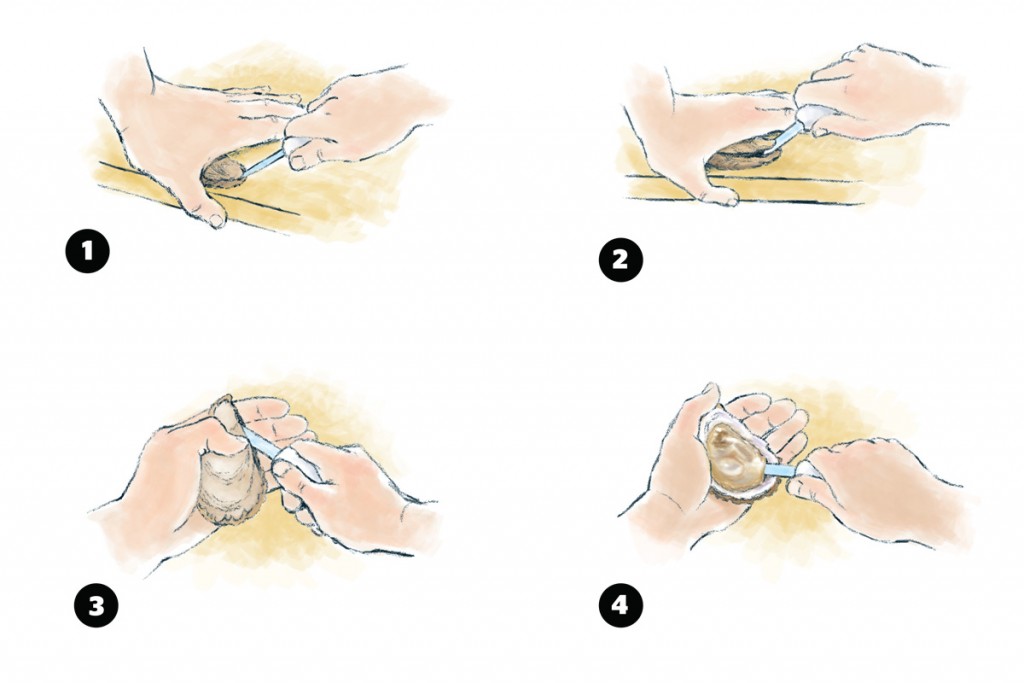 1. Put your palm on top of the oyster and hold it securely against a hard surface. In your other hand, hold the oyster knife at a 45 degree angle, and force the tip of the blade in between the top and bottom shells at the hinge.

2. Wiggle your knife along the edge while prying up at the same time, lifting the top shell apart from the bottom shell.

3. Once the top shell is popped, run the knife’s blade along the underside of the top shell, and cut the top of the adductor muscle. The top shell should now be free.

4. Be sure to keep all the liquor inside the bottom of the oyster shell while gently slicing the adductor muscle under the meat.

See a video on how to shuck your own oysters at home.

Can you help out our local oyster farms by ordering some oysters and shucking them at home? They have so many on hand since restaurant accounts have canceled orders. I got in some practice shucking these @chessawanock beauties I ordered through @tonysseafood on the @sourcewhatsgood app. They were delivered to my house. They are selling a dozen oysters for $15. @walrusandcarpenteroysters also has an awesome delivery deal for their oysters combined with scallops. Find out where to get local seafood for pickup and delivery. Link in bio.

Where to Get Local Seafood for Pickup or Delivery