A year and a half ago, the chef at Ten Prime Steak and Sushi decided to stop drinking and start riding, and he's proud of his mental and physical transformation. 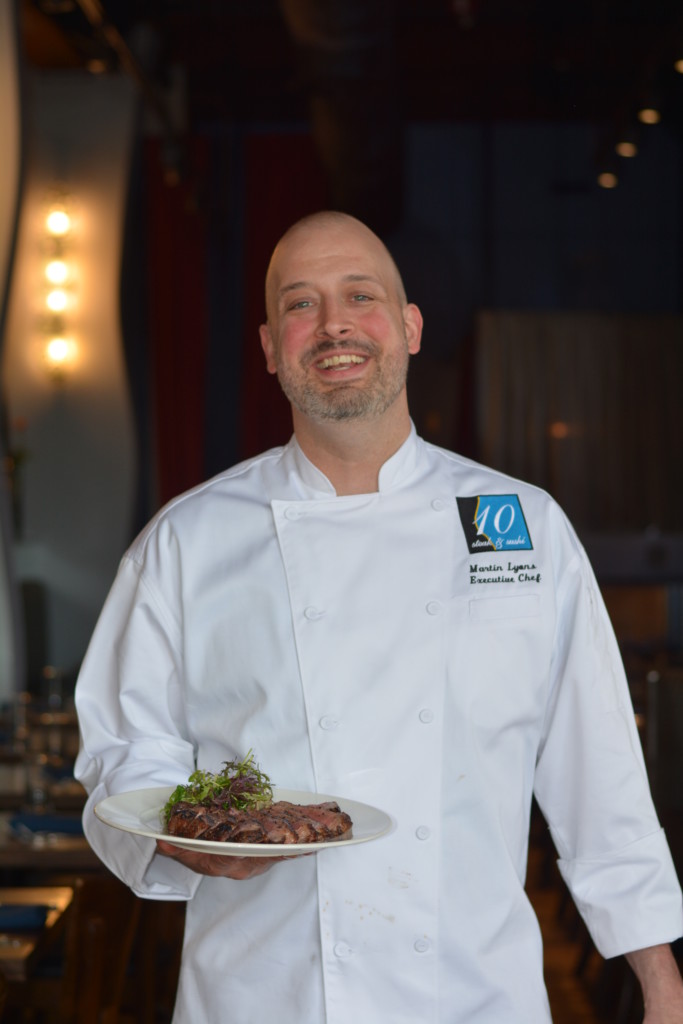 After working as head chef at XO Café several years ago, chef Marty Lyons is back with Chow Fun Food Group, heading up the kitchen at Ten Prime Steak and Sushi restaurant. He’ll be celebrating one year there in the fall while bringing small, positive changes to the menu, and he’s also honoring a personal change he made a year and a half ago: to quit drinking.

Working in restaurants, alcohol consumption is the social norm. It makes up an average of 30 percent of an establishment’s sales, and having a “shift drink,” or going out for drinks after work is often part of the ritual. In 2015, the Substance Abuse and Mental Health Service Administration reported that employees in the accommodations and food services industry had the highest rates of substance abuse out of the entire American workforce.

Over the last year, Lyons has worked hard to break himself away from it. He grew up in upstate New York, where his mother was a cook at a local diner. “I started cooking with my mom at church breakfasts when I was sixteen or seventeen,” he says. “It’s a very small town, and my mom was a diner cook when she was pregnant with me.” He was approached to work at a café in his hometown of Whitehall, New York, as a teen, and then attended culinary school at SUNY Cobleskill. The head of the culinary department there encouraged him to continue his education at Johnson and Wales University in Providence, and Lyons chose to remain in the city after graduation.

He first started out in the Providence restaurant industry as a bus boy at CAV, and worked his way up, followed by a position as sous chef at Nicks on Broadway. Lyons moved on to Loie Fuller’s and then XO Café, followed by head chef at Julians, before returning again to Chow Fun last November.

It’s been more than a year of transition for him, including on the personal front. Lyons speaks from experience for many in the service industry when he says he became addicted to alcohol. He explains how working in restaurants can be the most enabling industry ever. Whether you are having a good day or a bad day, alcohol always seemed to fit into the equation: “Did you have a bad night? Drink…. did you have an amazing night?…. Drink!” he says. “It’s like ‘Hey chef, you’re hungover, here’s a shot.’ ‘You’re tired? Take this,’” he says. “I almost got away with it because I was a really good cook.”

He says his stress and anxiety were amplified by work, and booze was his form of self-medication. His turning point came while working as a chef at Julians the day after Valentine’s Day service in 2018. Lyons spent the evening celebrating with a friend who was leaving the restaurant, and he woke up the next day feeling terrible on his one day off in six weeks.

“I was lying there on my first day off and feeling like a pile of garbage,” Lyons says. “I was up real late and in a very dark place. I didn’t want to keep living like that..I didn’t get scared until I totally stopped caring. I was like I really don’t care if I am around anymore.”

He had tried to quit drinking before and failed, but this time, something changed. He had previously met with another friend in the food event planning industry, Jim Nellis of RI Food Fights, who has been sober for twenty-seven years. Nellis took him out and said something to Lyons: “A friend had told him, ‘You don’t have to drink today,’ and that stuck with me, too. I started with ‘let’s take one day off,’” Lyons says.

He followed up with a social media post four months after his last drink, and his message resonated with the food industry and the local community. He described the morning he vowed to quit: “I have no clue as to why that morning was any different [than] any other mornings/days wasted lying in bed with the blinds drawn, and hoping no one would call from work. It was though. I got it in my head that I didn’t have to keep going on like this…so I stopped. At first it was, ‘Let’s take the next day off,’ and then, ‘That wasn’t too horrible…. how about one more day?’”

A year and a half later, and he’s still repeating the same mantra he learned from Nellis: “You don’t have to drink today.” As a result, he’s down forty pounds and has taken up road cycling as a new outlet to deal with stress, with a goal of cycling about 100 miles weekly. He even bought his bike off another service industry member who went through a similar positive transformation. “It’s my form of meditation and therapy, to go out and beat the shit out of myself and tire myself out,” he says. “I like kicking my butt. I am still just as tired. I might be vomiting from working out too hard rather than having the shakes,” he says with a laugh.

He’s focusing his personal life on wellness and professional life on feeding others, which is what he loves to do. Lyons is slowly bringing more local produce and proteins to the specials menu at Ten Prime, including seasonal fruits and vegetables from Four Town Farm, seafood from Tony’s Seafood and occasional ribeyes from Weatherlow Farms in Westport, Massachusetts, that sold out on the specials menu in one night. Local ingredients are his passion, and he’s planning to incorporate more of them in a new menu for Ten Prime by his one-year anniversary in the fall.

He’s also changed his eating habits and is incorporating more fresh fruits and vegetables and healthy alternatives in his diet. “I’m addicted to feeling good now,” he says. “My whole lifestyle has changed.”

And he’s put out some advice for others who may be facing a similar situation. “Start today, so stop today,” he says. “It’s a conscious choice every day. You have to be ready for it. I am a chef, I’m a boss, and I like to be in control. I didn’t like that something else had control over me.”

Recently, he said a friend also quit drinking and asked him to go riding, so the positive change is having an impact on others. “I’m like yea, I’ll wake your ass up at 6 a.m. to go riding,” he says. “But I still have to work on myself every damn day. I share what I can, but if you really want to do it, I’ll answer any questions and be there as much as I can. I just have to have something left for me.”

“Four Legs To Stand On” Opens Conversation on Addiction