Work Out Your URI Vs. PC Basketball Rivalry with a Beer Collab from Union Station and Shaidzon Breweries

The two Rhode Island breweries have teamed up to brew the limited-edition "Big Trouble in Little Rhody" Kölsch just in time for the big game on Dec. 4. 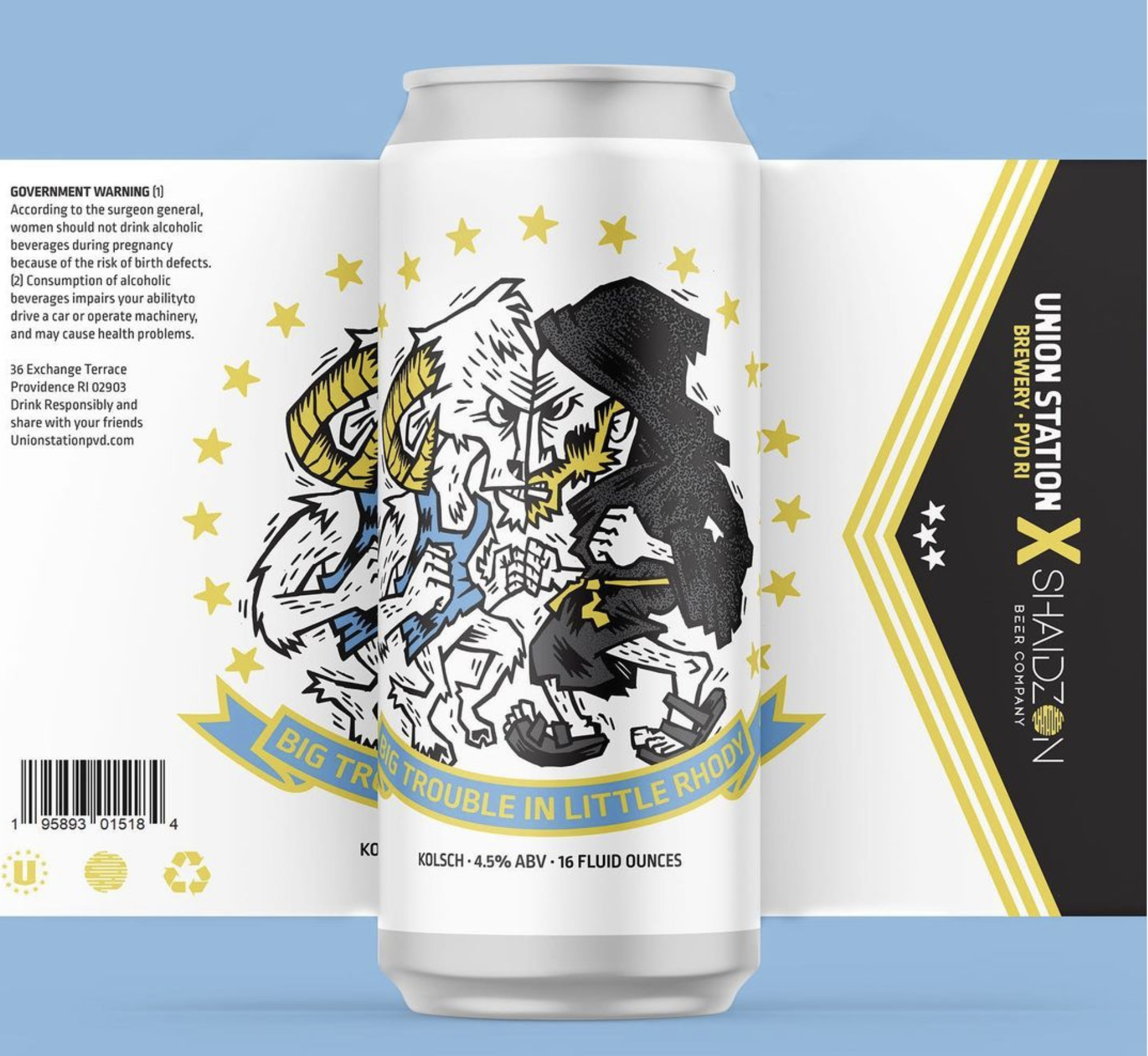 There’s a new beer to calm your nerves while watching the sold-out Providence College Friars vs. University of Rhode Island Rams basketball game, which is taking place at the Dunkin’ Donuts Center on December 4.  Union Station Brewery in Providence and Shaidzon Brewery in West Kingston have teamed up to brew the limited-edition “Big Trouble in Little Rhody” Kölsch, which will be released on Friday, December 3 at “A Road to Rivalry” pre-party at the Ocean Mist in Narragansett. The event will feature the beer and live music from opening band the Z-boys and the Silks, who are headlining the night. The next day, Saturday, December 4, “The Big Game Day Party,” starts at 11:30 a.m. at Union Station Brewery, where patrons can watch the rivals go head to head at 2 p.m. while sipping the signature beer.

This beer has been a long-time coming from the two Rhode Island breweries. It started out as a friendly rivalry between Shaidzon’s owner/business manager Chip Samson and Mike Delehanty, partner of both Union Station and What Cheer Tavern, who is also known for promoting Rhode Island’s local music scene. Samson is a huge fan of the URI Rams and Delehanty is a poster boy for Providence. Delehanty became a partner of Union Station in November of 2019, and he wanted to brew a collaboration beer between Union Station and Shaidzon to represent that rivalry. But COVID-19 delayed their master plan, and then they had to wait for the next home game, which will finally be held on December 4 at the Dunkin’ Donuts Center, located near Union Station Brewery.

“Been keeping this collab secret and can’t wait to let it out!” says Delehanty on Instagram. “When we bought What Cheer, our first big party was with Shaidzon at Cheer before and after the PC Vs. URI game. We intended to do a collab the next time PC and URI played after we bought into Union Station Brewery, But COVID delayed it. But this visual is beyond what I had in mind.” 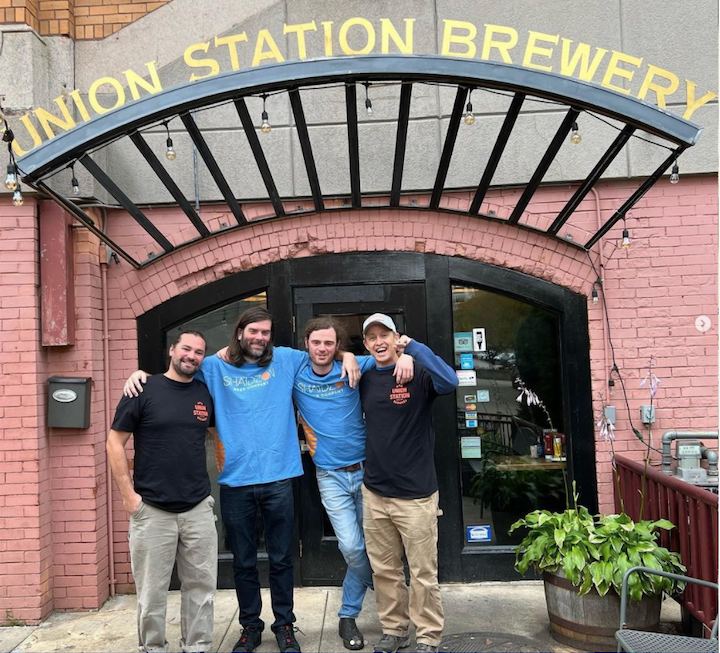 Delehanty and Samson and other local college basketball fans will finally be able to work out their differences through the beer that represents the decades-old rivalry. The German kölsch-style ale has been created by Shaidzon head brewer and owner Josh Letourneau and Union Station’s head brewer Dave Kenney. The artwork on the can, featuring a Rhody Ram going head to head with a Providence Friar, was designed by Brian Ralph, who created the drawing, and Jarrett McPhee, who created the art around the drawing.

“I love this for so many reasons. Brian Ralph used to do my band’s artwork when I was a teenager and got me into some great bands at his house Fort Thunder when I was a kid; I’ve always been a huge fan of his work and it’s great to be able to work with him again,” Delehanty says. “Jarrett did so many dope flyers for me at the Living Room, Jerky’s and Harper’s Ferry and has been a huge help then and now in my business growth (he also did all our previous cans ).”

The beer is being canned today to be released next Friday at the Ocean Mist, followed by the Big Game Day Party at Union Station the next day. 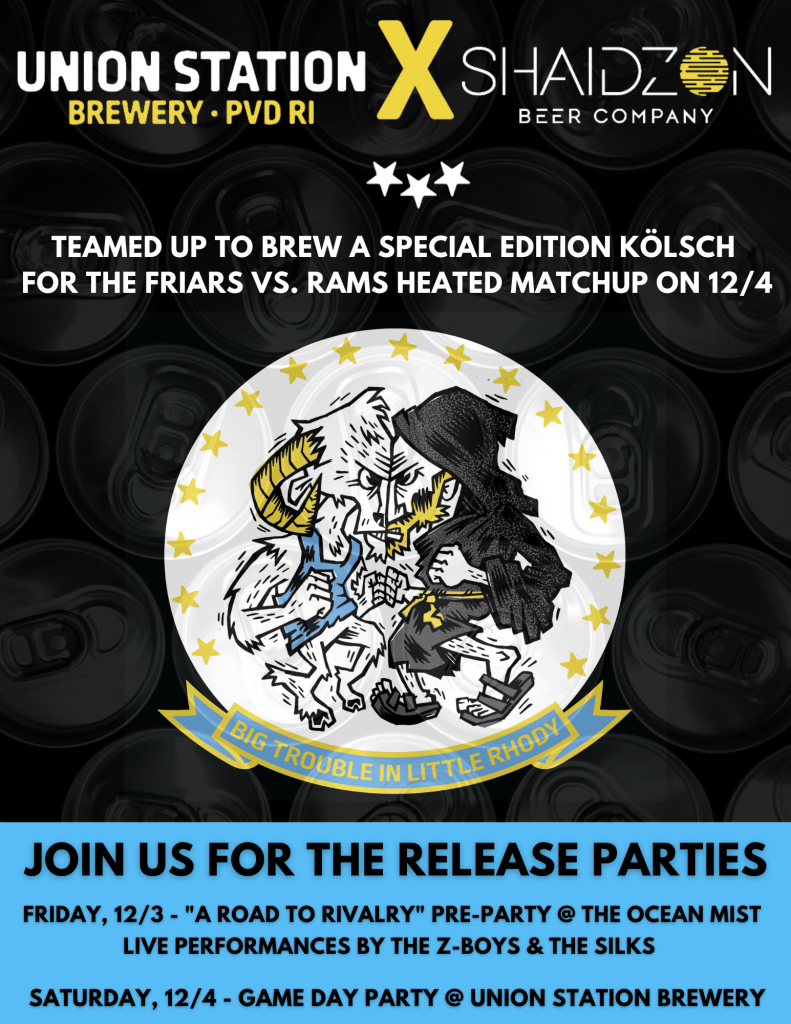 More Than Just a Label: The Fine Art of RI Beer Can Design