This past Sunday, February 17, Middletown resident George Mendonsa died at age ninety-five. He became famous for his claim that he was the sailor captured kissing a woman in a nursing outfit in Times Square after World War II ended. 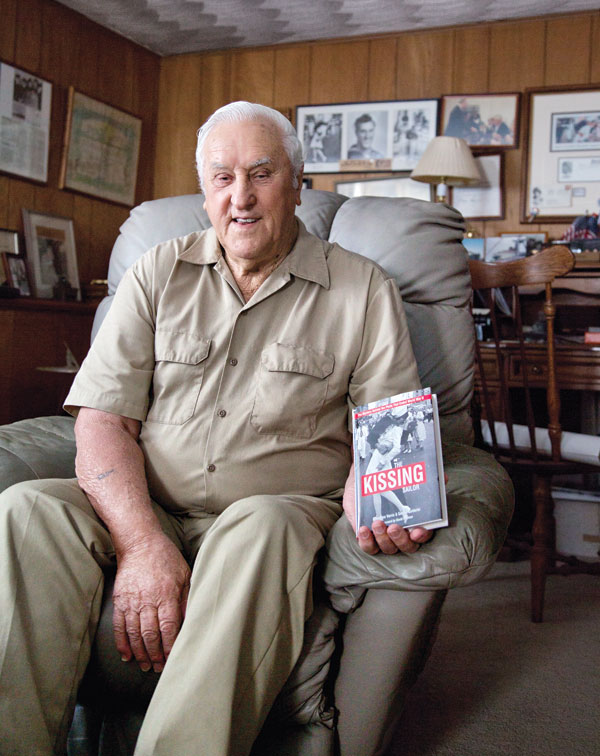 Editor’s Note: This past Sunday, February 17, Middletown resident George Mendonsa died at age ninety-five. He became famous for his claim that he was the sailor captured kissing a woman in a nursing outfit in Times Square after World War II ended in a photo that appeared in Life magazine. Rhode Island Monthly dug into the archives to find a story about the history of the photograph, which is explained in the book The Kissing Sailor: The Mystery Behind the Photo that Ended World War II, by North Kingstown history teacher Lawrence Verria and retired naval aviator George Galdorisi. Read below for the story, which is excerpted from a larger feature all about Rhode Island’s Unsolved Mysteries.

Originally printed in the January 2014 issue of Rhode Island Monthly.

It’s one of the iconic photos of the twentieth century. A handsome sailor grabbed a woman in a nurse’s uniform and planted a kiss on her in the middle of Times Square on the day news broke that the Japanese had surrendered.

In that single image, one of Life magazine’s best photographers, Alfred Eisenstaedt, captured the euphoria of August 14, 1945, the day the war that had claimed more than fifty million lives around the world was finally over.

Over the years, plenty of people saw themselves in the enduring image that became known simply as “V-J Day, 1945, Times Square.” “Many World War II sailors, a Coast Guard seaman, two home-front nurses and a dental assistant claimed key roles in the famous photograph,” North Kingstown history teacher Lawrence Verria and retired naval aviator George Galdorisi write in their book, The Kissing Sailor: The Mystery Behind the Photo that Ended World War II. “Their campaigns for recognition had turned contentious. Exchanges got ugly. Controversy brewed. And the battling had just begun.”

But Life has never identified the people in photo.

“And without Life’s blessing, no kissing sailor or nurse could hope to win over the masses to their version of that V-J Day from so long ago,” Verria and Galdorisi write. “As the years passed arguments in favor of one kissing sailor candidate over another succeeded only in knotting the mystery tighter. For over sixty-five years, the mystery remained, while Life watched.”

But the authors and Middletown’s George Mendonsa are certain he’s the strapping sailor in the photograph. Born in Newport to a commercial fishing family, Mendonsa had served in the Pacific for two years on the destroyer The Sullivans, named for five brothers who were killed in action, when the photo was taken.

“In July 1945, the only thing left out there for the Navy was going to be the invasion of Japan,” Mendonsa recalls. “They felt it would take six months to get the American army out of Europe to go out for the invasion of Japan. They felt that a lot of the ships had been in the Pacific for a long time, so we came back to the States.”

While the young sailor was home, he met Rita Petry, who “was about a year younger than me and beautiful, so I turned on all my charm and showed her around Newport.” With his leave running out, Mendonsa decided to fly out of New York City to return to duty so he could take Rita, who lived on Long Island, on a date.

On August 14, 1945, they were watching a movie in Radio City Music Hall. “There was a big commotion outside on the street, a lot of pounding on the doors, and inside we’re wondering what’s going on outside. And finally they stopped the show and they put the lights on and they said, the Japs have surrendered, the war is over.”

Radio City emptied out into Times Square, which was filled with jubilant people. Mendonsa and his date went into a bar. “And the booze was flying and everybody was excited, and I popped quite a few of them,” he says.

Eventually, Mendonsa thought he should walk Rita to the subway and catch his flight. Back in Times Square, he saw what he thought was a nurse approaching on his left. He flashed back to months before to a battle in the Philippines. Many sailors were seriously hurt and he always remembered the lifesaving work the nurses performed.

When he saw a woman dressed as a nurse, he instinctively grabbed her and kissed her, he says. “I honestly believe if that girl did not have a nurse’s uniform on that I wouldn’t have grabbed her.” They didn’t exchange names before parting. And they didn’t notice the photographer snapping away with his Leica.

Mendonsa didn’t know about the photograph until thirty-five years later when Life published the photo again and encouraged people who believed they were the sailor or the nurse to come forward. A friend of Mendonsa’s called him and asked him where he was that day. “When he brought the photo, the minute I looked at it, I said, Christ, that’s just like looking in the mirror. The minute I saw the picture, I knew it was me.”

And though several women claimed to be the nurse, Mendonsa became convinced that Greta (Zimmer) Friedman was the woman he kissed that day, based on physical characteristics like her height and hair at the time. She was actually a dental assistant, not a nurse, who was in Times Square on her lunch break when the historic photo was taken.

But about eighty sailors laid claim to being the sailor in the photo, and the magazine didn’t make a determination. In 1987, Mendonsa took Time Life Inc. to court, saying Life never got his permission to take his photograph. Photo experts used facial recognition technology and pointed to the size of his hands, a tattoo on one arm and a lump near his wrist to positively identify Mendonsa as the sailor in the photo.

And the woman pictured smiling over his right shoulder is Rita, the date who became his wife, he says. Mendonsa and Time eventually settled the case, but he points out that his evidence was good enough for a postmaster of the United States, who issued a commemorative stamp in his honor.

Friedman, who lives in Maryland, says most people have accepted that she is the woman in the photo, but Life has not identified her either. “They did not want to admit anything,” she says.

The editorial director for Time-Life Books told reporters as much in 2007: “The recent claims are ‘CSI-type’ inquiries. We think that’s great but we just can’t know for sure on our end. We can’t be in a position of anointing one or the other without hard proof,” according to Verria and Galdorisi.

But Mendonsa likes to point out the irony of a photo taken in Times Square during the 1980 event, when he and Greta reenacted the famous kiss for a “20/20” show. Over his and Greta’s heads, a marquee reads “It Had to Be You.”

Visiting hours will be 3 to 6 p.m. Thursday at the O’Neill-Hayes Funeral Home in Newport. A funeral Mass will be held Friday at 10 a.m. at St. Mary’s Church in Newport, followed by burial at St. Columba Cemetery in Middletown.

Other Unsolved Mysteries in Rhode Island

The Secret Life of Quonset