Spencer Morris cultivates forty varieties of apples for his handcrafted ciders fermented at his tasting room. 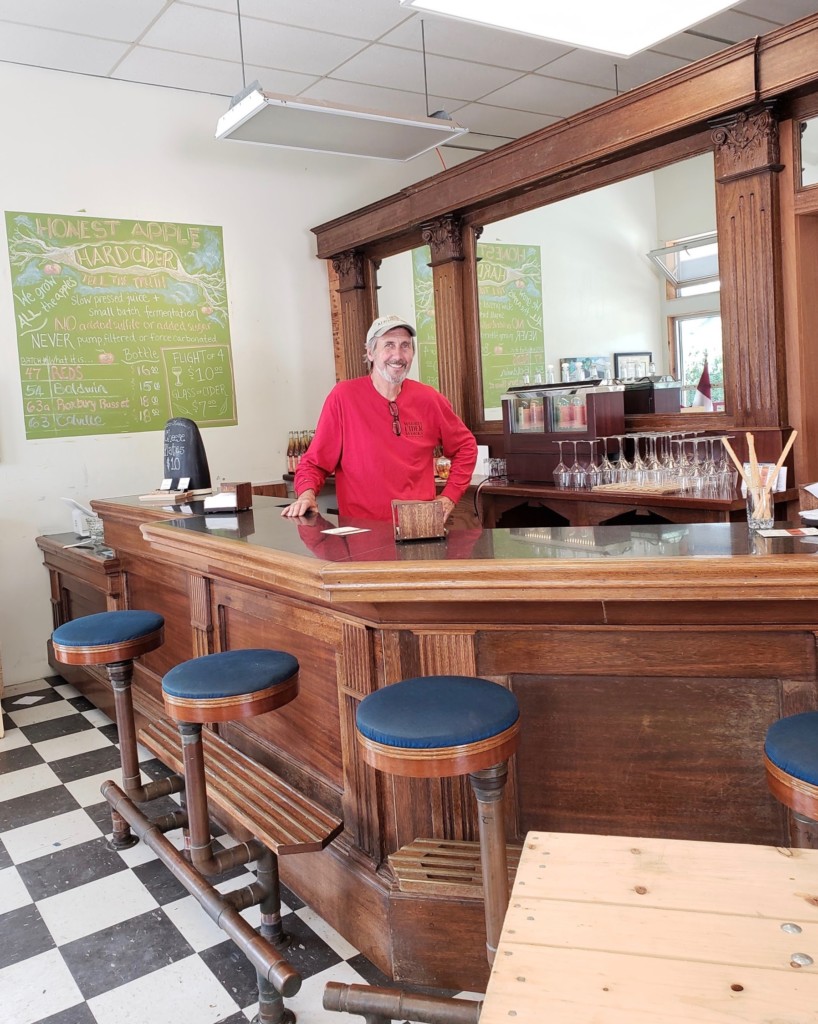 How do you like them apples? Spencer Morris really likes them apples. So much so that he opened Sowams Cider Works (formerly Warren Cider Works) on Child Street in Warren, handcrafting hard cider out of more than forty varieties of apples that he grows, including some heirloom and European varieties.

Morris has been cultivating apple trees for seven years at his apple orchard planted along an idyllic stretch of land in Touisset, where native pollinators are abundant to allow the trees to flower and bear fruit. Some of the apple varieties are names that go back centuries; Roxbury Russet, Northern Spy, Newton Pippin, Bramley’s Seedling and even the rare Rhode Island Greening. “This is my seventh leaf, as they say,” Morris says. “The trees I grow produce fruit in two years, and fruit of any significance in four to five years.”

He planted trees of different sizes including dwarfs, semi-dwarfs, semi-standard and standards. Each apple variety has distinctive uses from the sweeter dessert apples, to more acidic cooking apples and long-lasting storage apples. In mid-September, Morris also operates a fruit stand at the tasting room, where people can try all types of his homegrown apples. He experiments with varieties to understand aspects of growing, to see what’s most productive and to test which make the most flavorful hard ciders.

“I wouldn’t be making cider if I weren’t growing the fruit,” he says. “It gives me control over the harvest, because for cider-making, you want an optimally ripe fruit.” He says sometimes commercial apple growers will pick slightly underripe so that the apples will store longer. “If you buy apples at the market, chances are you’re getting fruit that didn’t tree ripen. It’s really important to optimize tree ripeness,” he says. “It indicates that most of the starches have been converted to sugar, and the flavors are optimal; the acids, the tannins, the things you look for in cider.”

Morris’s family history includes his grandfather’s apple orchard in Hudson River Valley, New York, where his grandfather actually grew the Rhode Island Greening. Morris’s mother continues to run a small pick-your-own orchard there. “I didn’t have much to do with it when I was a kid other than asking, ‘When are they going to be ripe?’” says Morris with a laugh. “I didn’t understand the complexity and the diversity and all the details. I am learning about it but I am certainly no expert.”

To teach himself about ciders and the fermentation process, Morris read a lot of books, sought information from the University of Rhode Island, and he also talked to people about it, who were very generous in sharing their expertise. It takes about a year for hard cider to properly ferment from the time that it’s bottled until it’s sold on the shelf.

The process is very similar to winemaking. The apples are harvested, washed, culled and then ground whole – seeds and all— into a “lumpy, porridge-like” mixture. The mash is pressed using two hand-cranked, antique rack-and-cloth system presses. The resulting juice is then stored in glass demijohns, where the natural yeasts in the flesh and on the skins trigger the primary fermentation, or Morris will inoculate the juice with a specific yeast to get it going himself. “Just like winemaking, there’s primary fermentation, which is the vigorous yeast fermentation of the apple sugars into alcohol,” Morris says. “The alcohol in my ciders can range from six percent to ten percent, which is quite a range, and that’s all driven by varietal and weather, which determines the sugar content of the flesh. The more sugar the more alcohol.”

The same rules apply from wine to cider. “The more sun, the more sugars, more tannins, more acids, more complex flavors, and in a sunny, late-summer/fall, we’re inclined to have much better-quality fruit for cider,” he says. 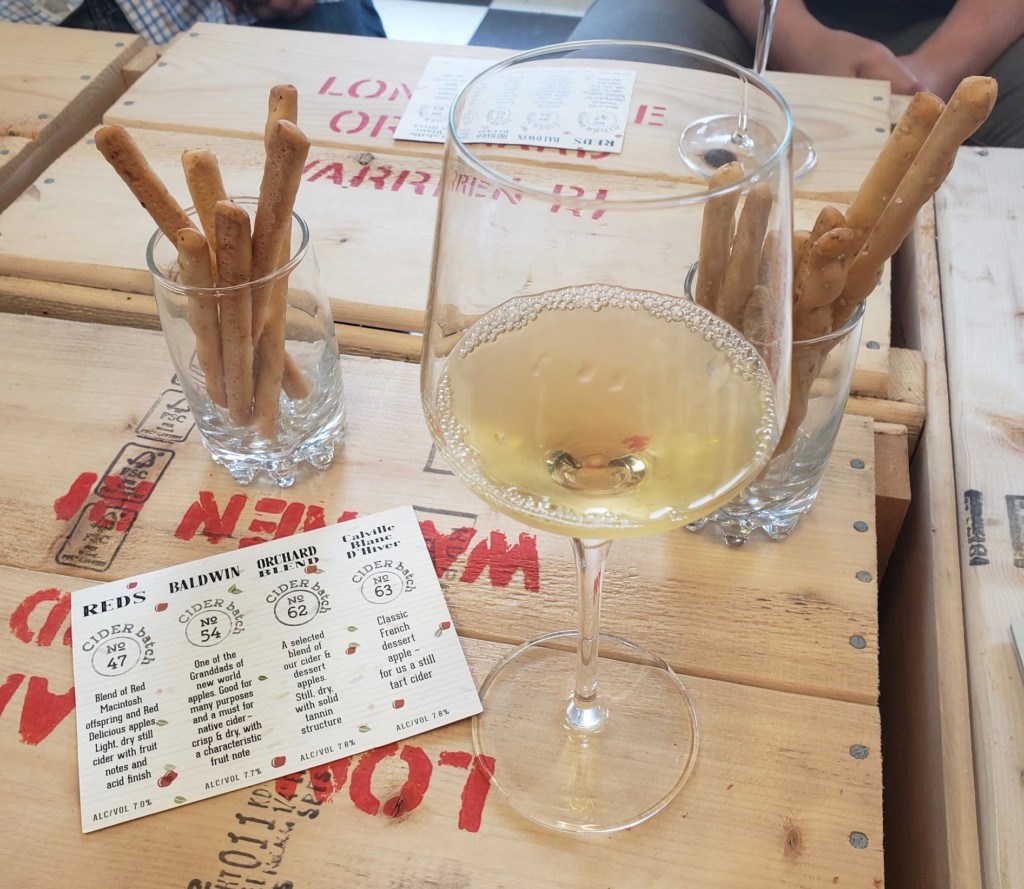 A tasting at Sowams Cider Works includes a flight of four pours.

After primary fermentation, the cider is moved into aging vessels where it ferments for another three to six months until it is finally bottled and sold.

While most businesses aim for consistency, Morris prides himself on inconsistency. Every year, the fruit crop is different based on the weather and the unpredictability of farming. “Like great wines, the year of the cider is the year the fruit is grown,” he says. He notes that his hard ciders have no added sulfites, no added sugar, no carbonation and they are left unfiltered. Some natural carbonation might occur due to in-bottle malolactic fermentation, but most of his ciders are like a still white wine.

Visit Sowams Cider Works for a four-flight tasting for $10 or a glass of your choosing for $7, and be sure to sit on the beautiful new outdoor patio. Inside, there’s a historic 1900’s bar that once was installed in a Victorian-era saloon in Fall River before it became the showpiece at the now-defunct Blue Point Restaurant at 100 North Main Street in Providence. The bar was stored for a number of years until Morris got ahold of it from his friend that formally owned the notable restaurant. “I had it in the back of my mind that I was going to do the cider business, in what form I hadn’t conceived exactly,” Morris says. “But it seemed like it might come in handy.”

Now the beautiful wooden bar with round, swiveling stools serves as the focal point and conversation piece to his very own cidery in the small town of Warren.

Sowams Cider Works is open Thursday, Friday and Saturday from 2 to 8 p.m. and Sunday from noon to 5 p.m. 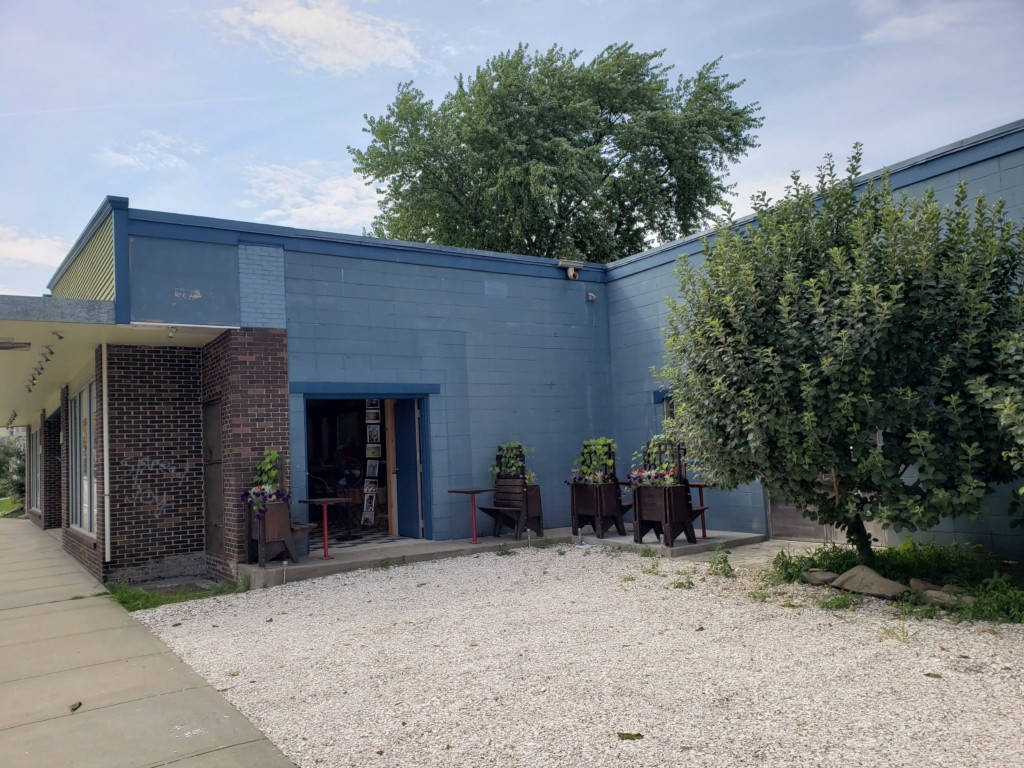