The new station opened to much fanfare on Jan. 23, offering the first commuter train service in the two cities in more than forty years. 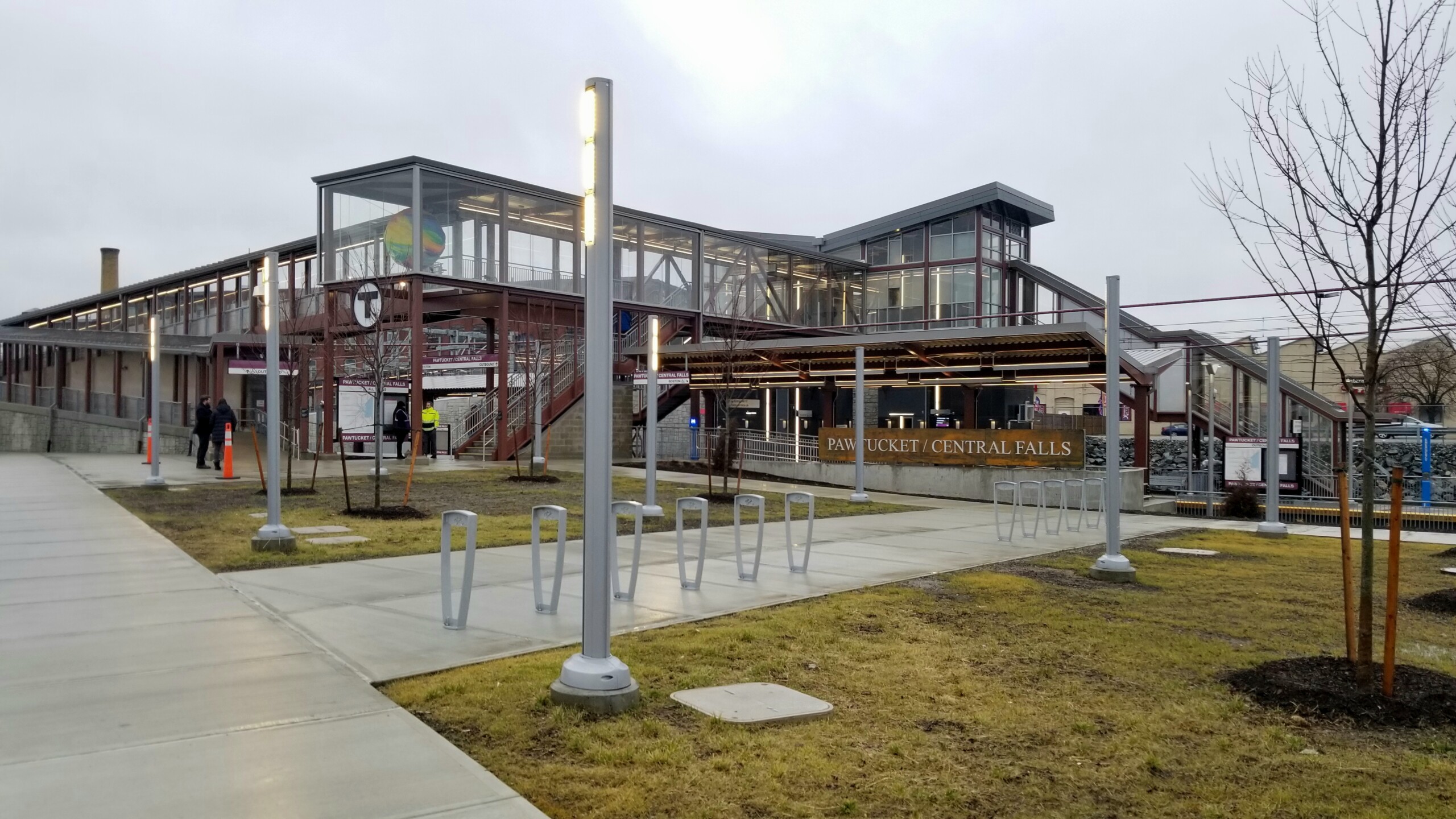 After many years of waiting, the new Pawtucket-Central Falls Transit Center has finally arrived.

The new station saw its first trains (enroute from Providence to Boston) pull up to the platform at 4:21 a.m. on Monday, Jan. 23. Several hours later, dozens of public officials took a ceremonial train ride from Providence to Pawtucket and held a ribbon cutting on the platform. Officials extolled the new station, years in the making, as a “game-changer” for Pawtucket and Central Falls and highlighted the mix of federal, state and local funds it took to make the project a reality.

“The more connectivity we have between Rhode Island and Boston, the better,” says newly sworn in U.S. Rep. Seth Magaziner, one of several officials present for the ribbon cutting.

Here’s everything you need to know about the new station. 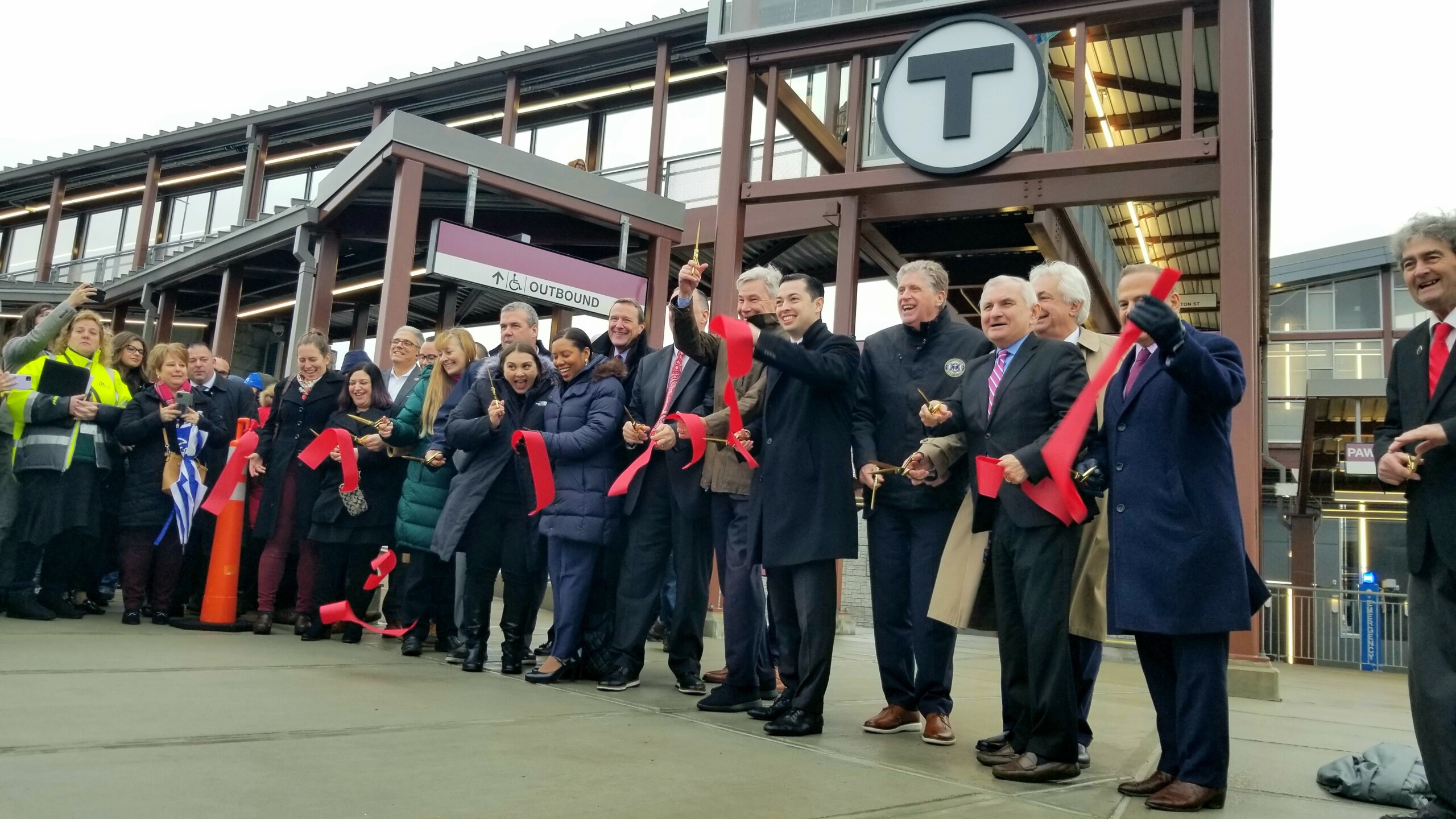 Public officials formally cut the ribbon on the new station.

It takes just over an hour to get to Boston.

It takes fourteen minutes to get to Providence.

The train ride to Providence from Pawtucket takes about fourteen minutes on average. (And just imagine all the time you’ll get back enjoying the train instead of sitting white-knuckled in traffic on the Pawtucket S-curves.) The return trip is a little shorter, about six minutes. The fare is $2.75 one-way or $90 for a monthly pass.

The station is equipped with twelve bike racks on the south side, and a set of dedicated bike and bus lanes along Exchange Street and Goff Avenue links the transit center with downtown Pawtucket. Bikes are allowed on the train to Boston or Providence only during select times. Check the full MBTA bike policy for more information. 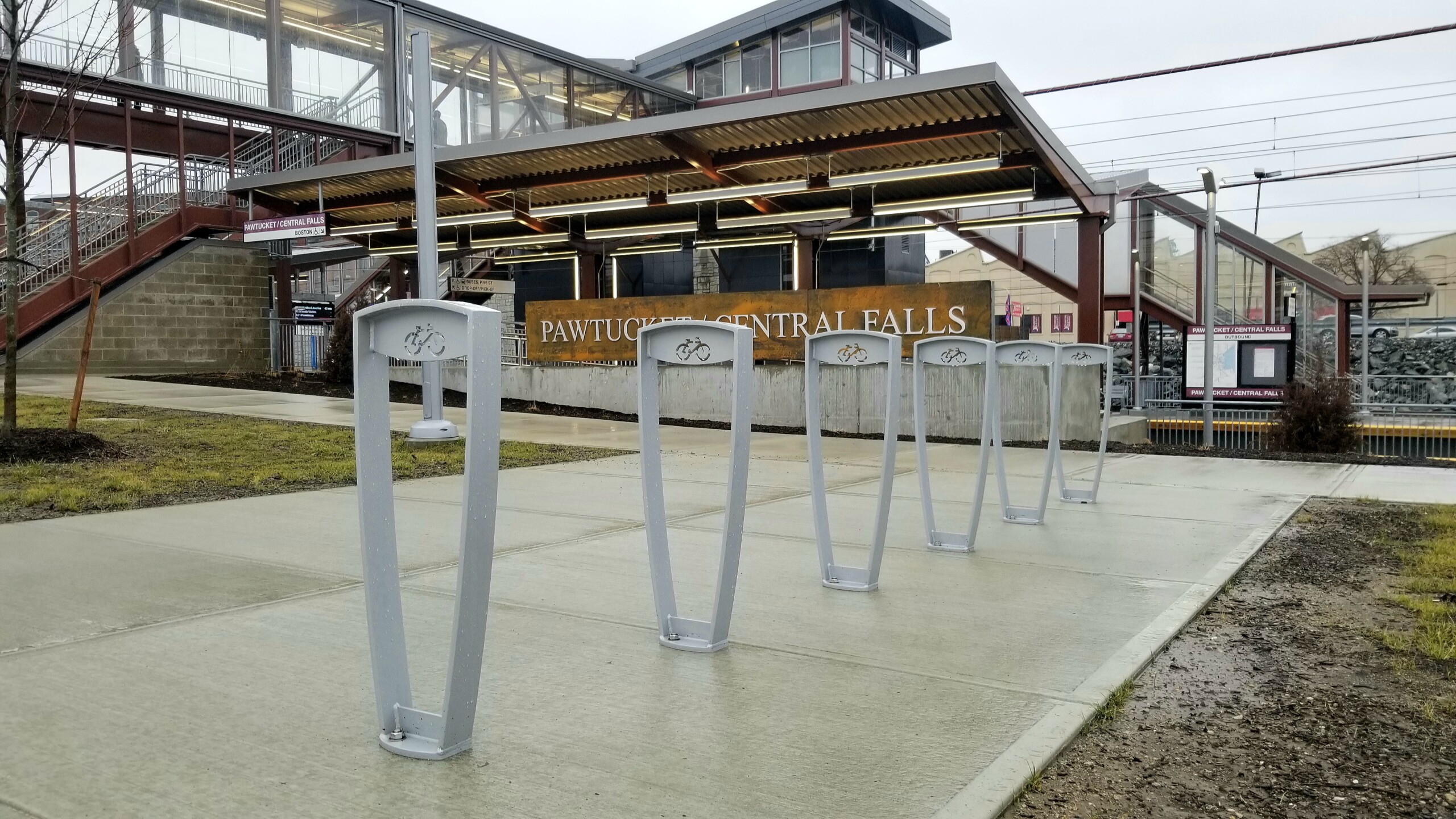 Bike racks at the new station.

Parking is free (for now).

Unlike the Attleboro station, which charges $5 per vehicle per day for parking, and the Providence station, which has street parking and an underground garage that charges daily rates, the Pawtucket station is currently offering free parking. According to Rhode Island Department of Transportation spokesperson Charles St. Martin, parking is expected to remain free for about six months. After that, RIDOT plans to hire a maintenance company to manage the parking lot and will likely impose a parking fee. There is a 200-vehicle lot on the south side of the station off Pine Street, and there are plans to add another 200 spots along with bathroom facilities later this year.

The crosswalks have radar-enhanced technology.

The crosswalks between the train station, parking lot and bus hub have radar-enhanced technology. The blinking lights flash as you walk over them for a safer stroll.

You can take the bus to the train station.

In addition to the train, the Pawtucket-Central Falls Transit Center is served by RIPTA lines 1, 71, 72, 73, 75, 76, 78, 80, QX and the R-Line. This means travelers can catch a bus to or from Providence, Pawtucket, North Providence, Cumberland and several other communities when taking the train. According to RIPTA CEO Scott Avedisian, travelers with an MBTA pass can ride the bus to the station for free for the next six months.

The station is already spurring economic development in the surrounding neighborhood.

According to Pawtucket Mayor Donald Grebien, several redevelopment projects are underway in the surrounding neighborhood. On one side of the station, the owner of a former mill building is converting the structure into apartments, while on the other, a new property owner is interested in developing workforce housing. Participants in a Jan. 23 ribbon cutting also noted the progress on the nearby Tidewater Landing soccer stadium and how the new station can serve fans for the future Rhode Island FC.

At the same time, local leaders also stressed the importance of making sure existing businesses aren’t priced out of the area. Lt. Gov. Sabina Matos says officials need to ensure business owners can remain in the area as development progresses.

Can’t wait to make use of this station to and from RIFC match days! 🚉 https://t.co/J0JY9KLe0e

It includes a public sculpture inspired by the cities’ past.

As part of the project, the Rhode Island State Council on the Arts and the Rhode Island Department of Transportation commissioned a sculpture by artist Gianna Stewart that hangs prominently in the station’s entryway. The giant sphere, called “Spun,” is made up of hundreds of strands that pay tribute to the area’s textile history while representing commuters today.

“Immeasurable amounts of thread were once created by the power of workers and water in Pawtucket’s nearby mills,” Stewart writes in an artist statement. “A sphere, a ball of yarn, a bundle of thread overhead — these interwoven strands echo the continually crossing paths of today’s commuters, weaving into something wonderful and spun together.” 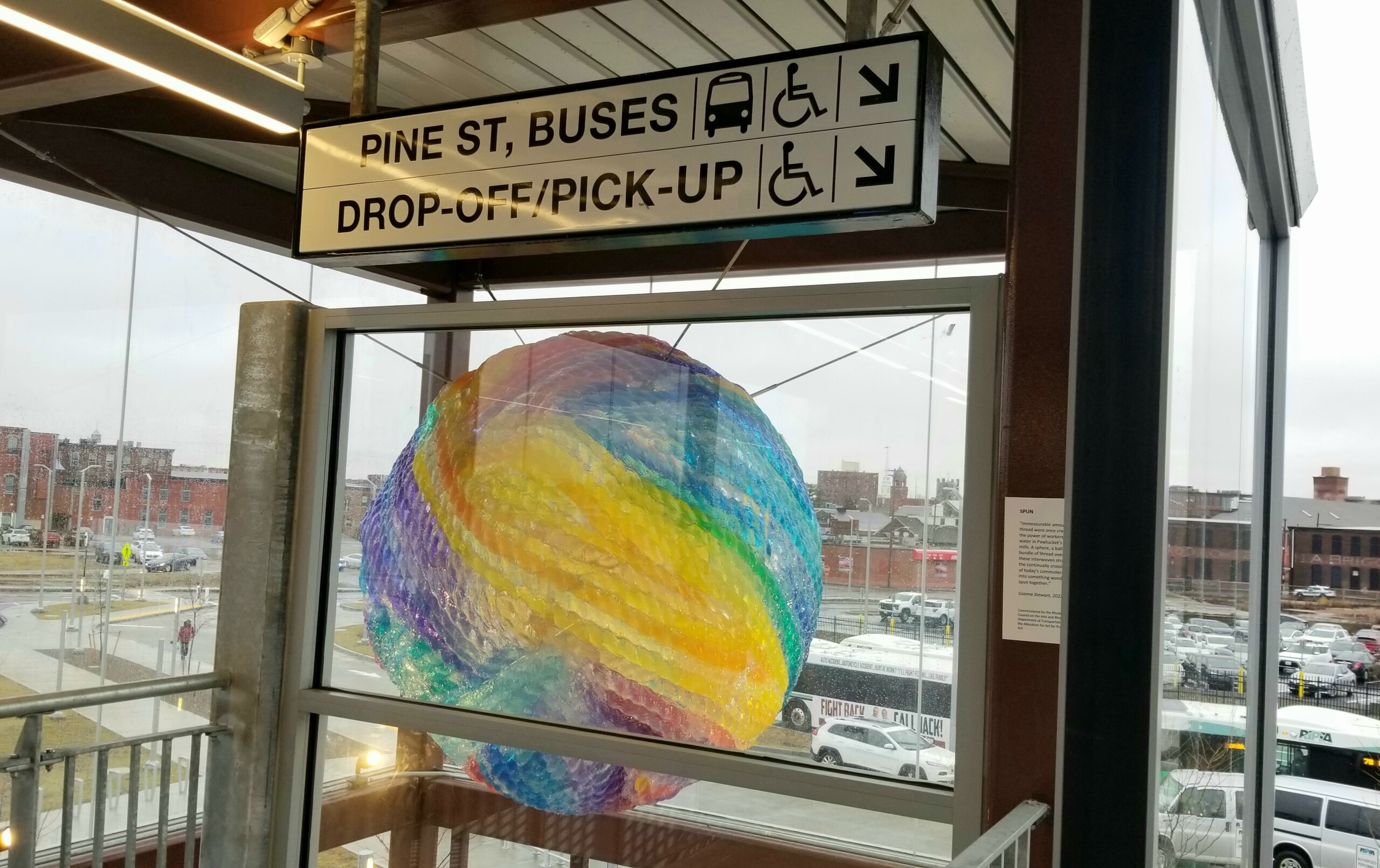 “Spun” by Gianna Stewart hangs on the upper level of the train station.

All Aboard! Pawtucket-Central Falls Transit Center On Track to Open January 23

Ship Up to Boston for the Boston Wine and Food Festival