Three New Art Shows to Check Out In September

From Westerly to Woonsocket, artists of all ages are embracing their creativity this autumn with mystical themes and out-of-the-box media. 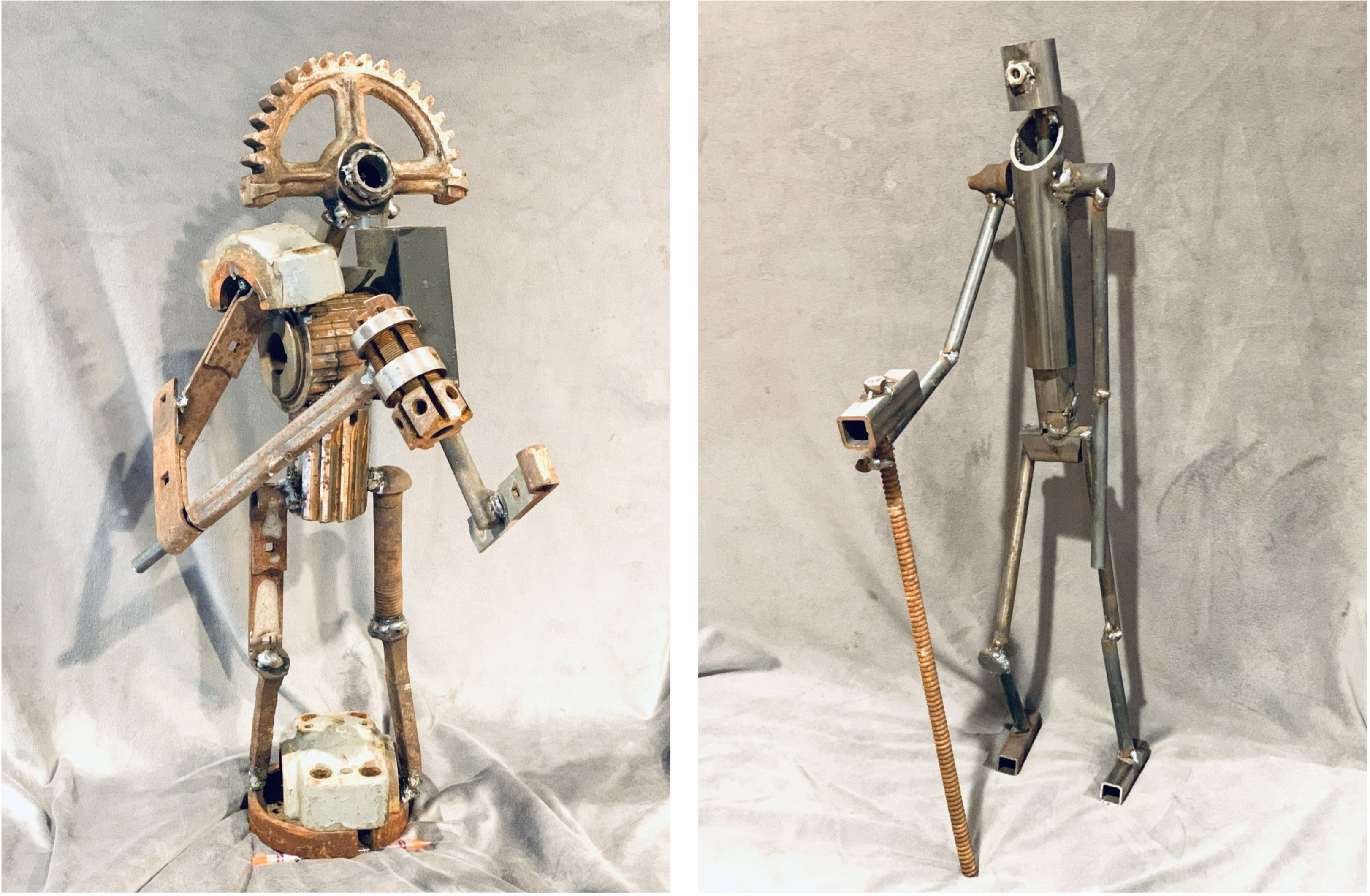 Metal creations by Austin Hall will be exhibited at the Collaborative in Warren this month. (Photos courtesy of Sylvia Vermeer Hall)

If there’s one thing to learn from the local art landscape in September, it’s that creativity has no age.

This month’s gallery offerings include work by artists from all stages of life, from a Barrington High School student exhibiting his Steel Yard-inspired creations at the Collaborative in Warren to an 88-year-old painter whose work has been shown in New York and Connecticut and now finds a home at the Tapped Apple in Westerly. Along the way, art aficionados can explore galleries in all corners of the state, including Monument Square Arts in Woonsocket, which opened last year and specializes in up-and-coming artists whose work often focuses on nontraditional themes.

Here are three art shows to catch in Rhode Island this month.

“Magic with Metals” by Austin Hall 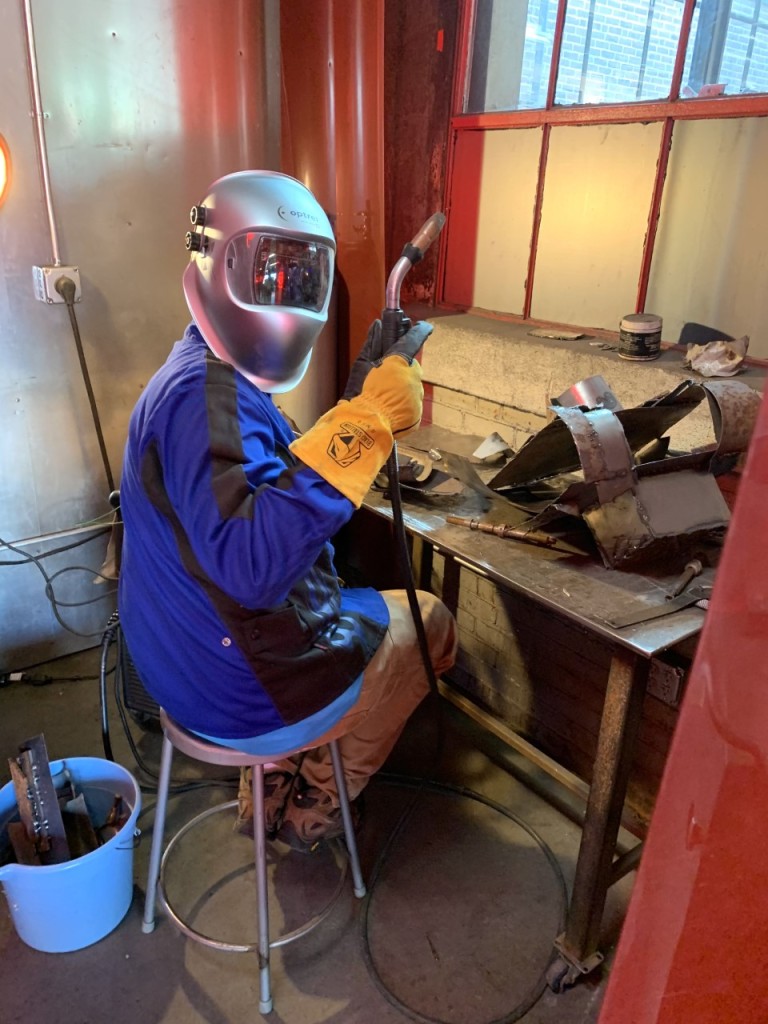 Austin Hall at work on his creations at the Steel Yard. (Photo courtesy of Sylvia Vermeer Hall)

Austin Hall was still in his early teen years when he discovered his passion for welding metal into art. A born maker, he’d moved on from the LEGO and duct tape creations of his youth and was ready to work with a material that would last.

“I’ve always liked metal because it is very sturdy and has a very long lifespan, more so than all the other stuff I used to build,” he says.

He credits Professor Gizmo’s Workshop in Barrington — a local maker space run by husband and wife duo Gary and Annie Deslaurier — with getting him interested in recyclable materials, but it was only after he joined the Steel Yard at age fifteen that his creativity could fully take flight. Now a senior at Barrington High School, he makes regular visits to Providence to work on a series of creations he’s dubbed the “rusted pirates” — humanoid figures with robot-like qualities and elaborate back stories. He forages the materials from the Steel Yard’s scrap piles, so no two figures are alike, and he never quite knows how a project will take shape until he arrives.

“I’m very proud of my creations,” he says. “They are all completely unique from one another. Each one does pull a small inspiration from different events that have happened to me or different things I have seen or been inspired by.”

For the first time this month, his creations will be on public display at the Collaborative in Warren, where Hall is the featured youth artist for the month of September. An opening reception will take place on Thursday, September 1, from 6 to 8 p.m. His creations are also visible online at magicwithmetals.com. Hall hopes to pursue a career in video game design and continue making and selling his welding artwork on the side. 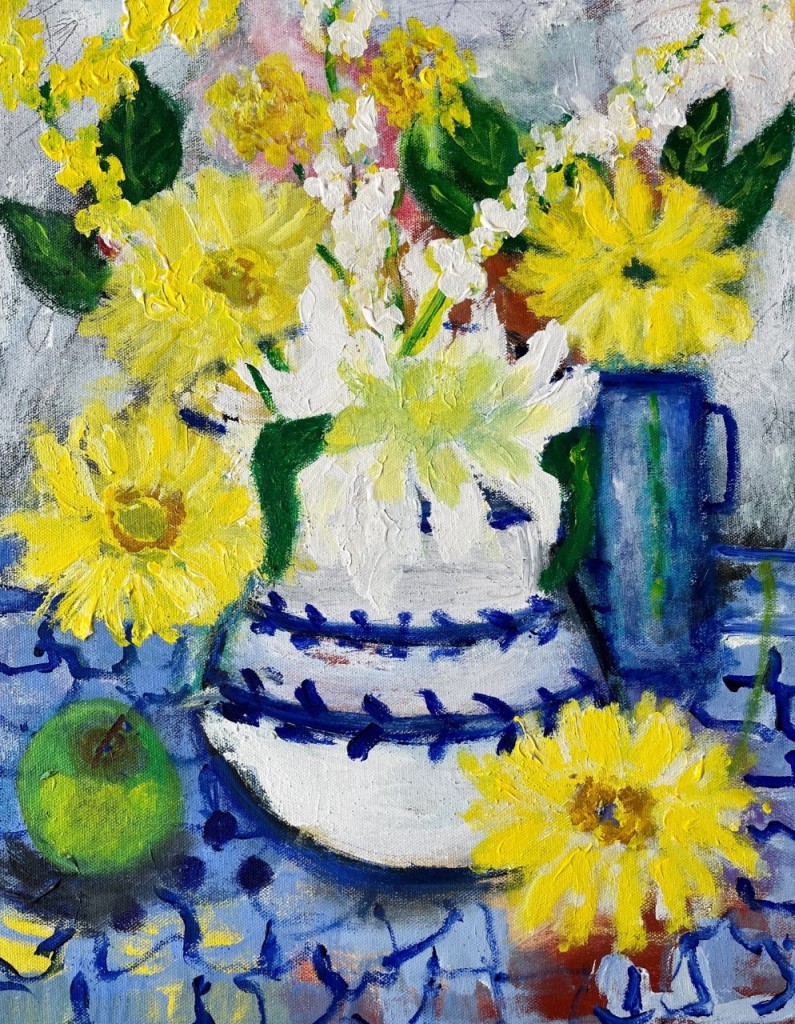 Trisha Grabel has some advice for her fellow octogenarians: Always enjoy what you’re doing, and never be afraid to embrace your passions. The eighty-eight-year-old Mystic resident discovered painting in her sixties and has shown her work across several states, with a new solo exhibit at Tapped Apple Cidery and Winery opening later this month.

“It’s always appropriate to embrace your passions at any age. To be successful, however, you have to be prepared to work very hard,” she says.

A native of London, Grabel moved to Canada as a child when she was evacuated during World War II. She returned to England but later moved to the United States with her husband, journalist Dan Grabel, and had a successful career as a director of publicity for Conran’s home furnishings chain before she discovered her passion for art. She and her husband later purchased a summer home in Westerly, drawing them to the New England coast.

Grabel draws inspiration from artists such as Pierre Bonnard, Henri Matisse, Vincent van Gogh, Andy Warhol, Jackson Pollock and Helen Frankenthaler. Her work often depicts the ocean scenery of Westerly and Mystic near her home at StoneRidge Senior Living Community. She says her work is “fueled by my exuberance, imagination, intellect and love of color and motion. Nothing is rendered realistically.”

Tapped Apple Cidery and Winery will hold an opening reception on Friday, September 16, from 6 to 8 p.m. The exhibit will be on display from September 16 through October 20. 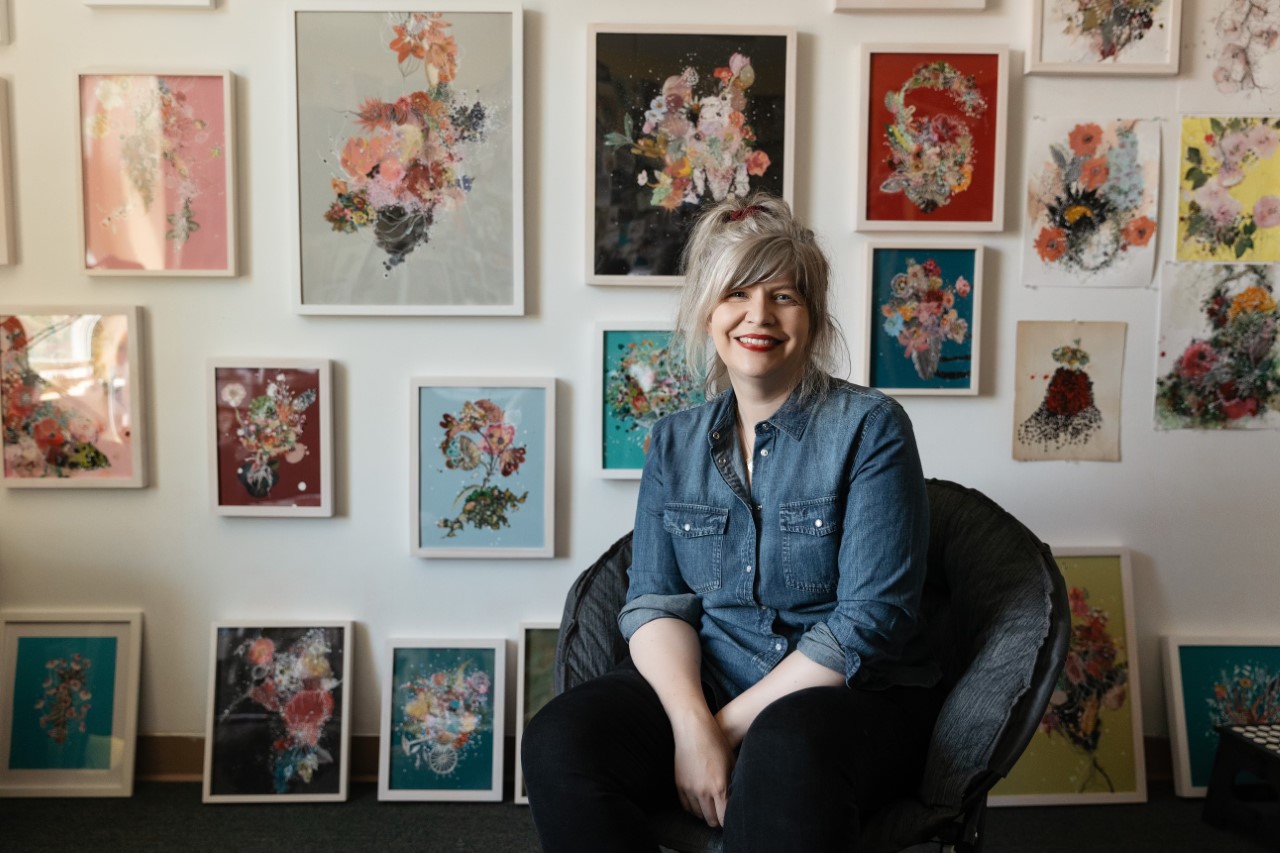 When Kim Celona opened Monument Square Arts in Woonsocket last year, she hoped to create a home for up-and-coming artists to display and sell their work. That’s true for Olneyville-based artist Jenny Brown, whose exhibit, “Universal Garden,” will be on display from September 10 through October 8. Brown, a 1996 Bennington College graduate who received her MFA from the School of Visual Arts in New York, explores questions of time and energy in her drawings and collages, which feature ethereal undertones and dreamy, nature-inspired scenes.

“Over the past two decades, I have been making art which questions our long-held understandings of time, space, energy and matter. With a focus in visualizing the most lush and ethereal phenomena of the natural world, my collages and drawings are celebrations of the ongoing physical and spiritual evolution of our universe,” she says.

Brown’s work has been shown at the Bemis Center for Contemporary Art in Omaha, Nebraska, and Drive-by Projects in Watertown, Massachusetts, as well as at the 2022 Superfine Art Fair in Washington, D.C. Monument Square Arts will hold an opening reception on September 10 from 4 to 7 p.m. The reception will also feature music along with refreshments from Hudson Chatham Winery.

Bad Fit is a Good Fit for Everybody