The bar is serving Saugy dogs and "escalated" comfort food with craft cocktails and beer in the newly renovated building in Providence's "historic parking lot district." 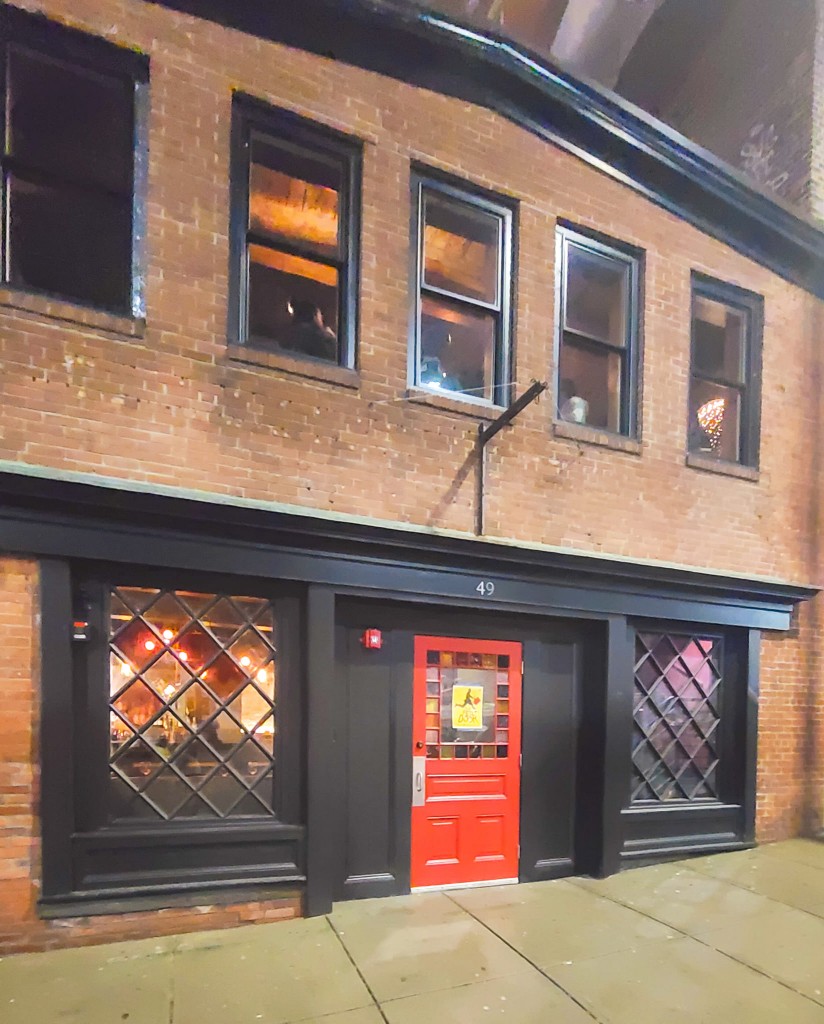 The Red Door in Providence.

The former legendary Thee Red Fez location in Providence has been completely revamped and opened as Providence’s newest hang, the Red Door. It may not be decked out with taxidermy, deer antlers and white rabbit references, but it has all the makings of a great bar with excellent craft cocktails and beer, an inventive food menu of Saugy dogs and elevated comfort food, and a passionate team behind it that is eager to honor Thee Fez building but with their own twist.

The Red Door is located in what had been coined “the parking lot district” by the original owners, Ed Reposa and Sara Kilguss, who opened the bar in 1999-2000, then sold it to Kevin Berglund in 2012, who owned it for seven years. After earning a legendary reputation for its mac and cheese, eleventeen-spiced wings, poutine and more and becoming a Providence institution, Thee Red Fez unfortunately closed in 2019. The building sat decrepit and empty for several years, until the new co-owners, Phil Martelly, Chris Martelly and Matt Dawson bought it and put in the time and money to completely renovate it. 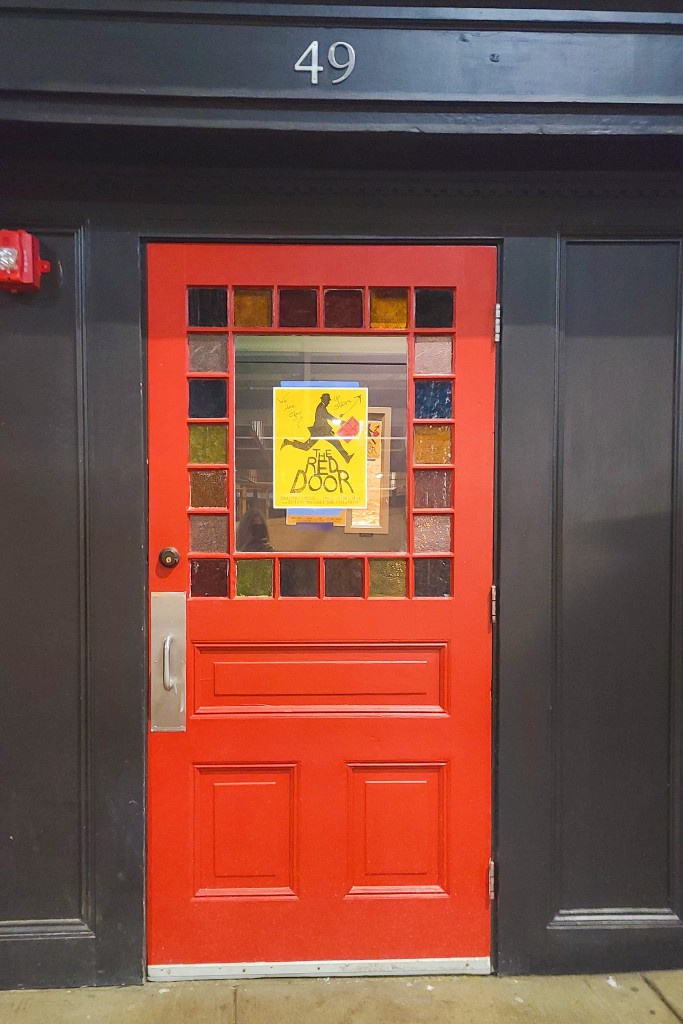 “Lots of history there. I can’t wait to stop in and see the place,” says former owner Raposa. “Such a cool little building, psyched that it’s back in use. And glad they are still using my ‘historic parking lot district’ line!” 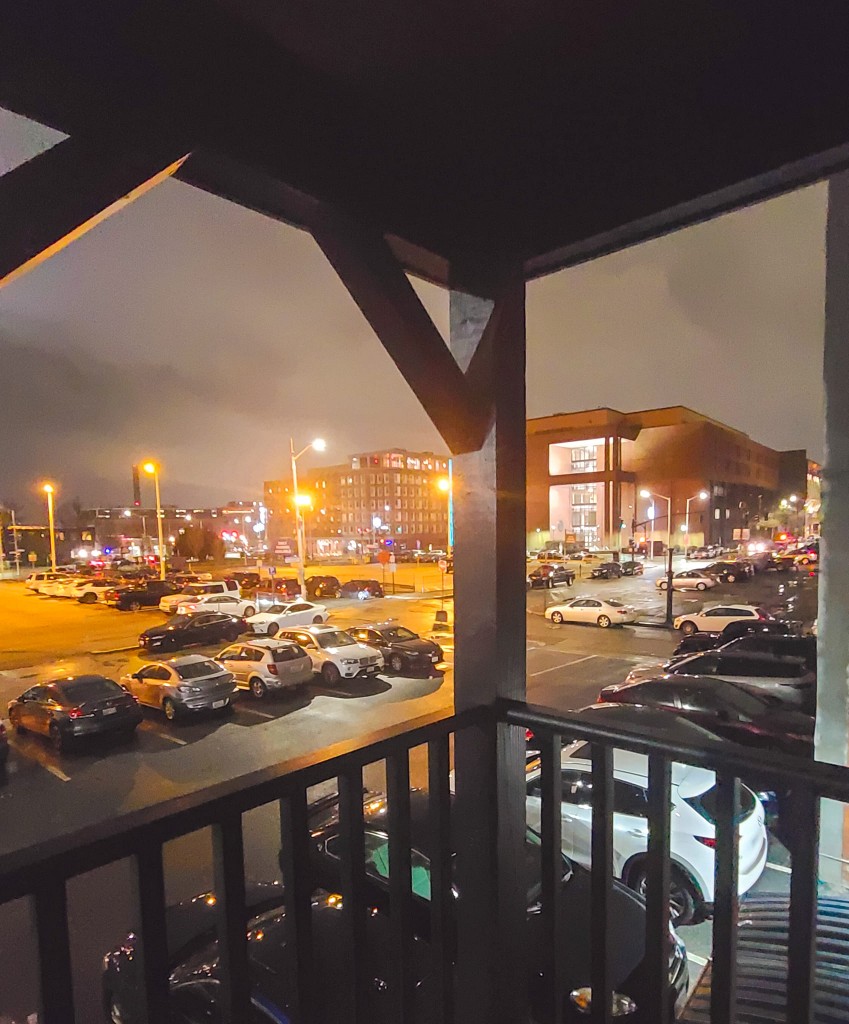 It took a lot of work for the new owners to get the building up to par. “We gutted it from front to back and sand-blasted the entire second floor. As we demoed we uncovered some beautiful brick work that we decided to work into the design,” says co-owner Phil Martelly, who also owns the construction company Martelly Building and Design as well as several School of Rock locations. “After sandblasting the second floor, the original wood and brick was revealed which was also very exciting and inspiring.” They kept the original red brick, and also honored the upstairs – formerly called the White Rabbit – by preserving the original bar and the black, mirrored back bar. They kept a wood-cabin-like feel and added a cool infinity mirror.

Owning the bar means a lot to the trio. Phil Martelly was a frequent customer of the Fez while he was active in the Providence music scene. He owns multiple School of Rock locations and one of his students, Jackson Collins, was one of the final chefs to work at the Fez before it shut down. Phil thought about opening a bar during the pandemic and the Fez location came up at the right time in the summer of 2020. “When Covid was in full swing, I acted on a thought I have had for a long time to open a restaurant/bar in Providence,” Phil says, adding that a friend tipped him off that 49 Peck Street was available for purchase.

“I left my office, ran down there and shook on a price. I couldn’t believe it was the Fez out of all the places that are in Providence that landed in my lap!” Phil is a fifth-generation carpenter/general contractor and he knew they could complete the necessary work on nights and weekends. “It has been in the back of my mind since the beginning to try and honor the vibe of the Fez and create a place that is welcoming to everyone,” he says. 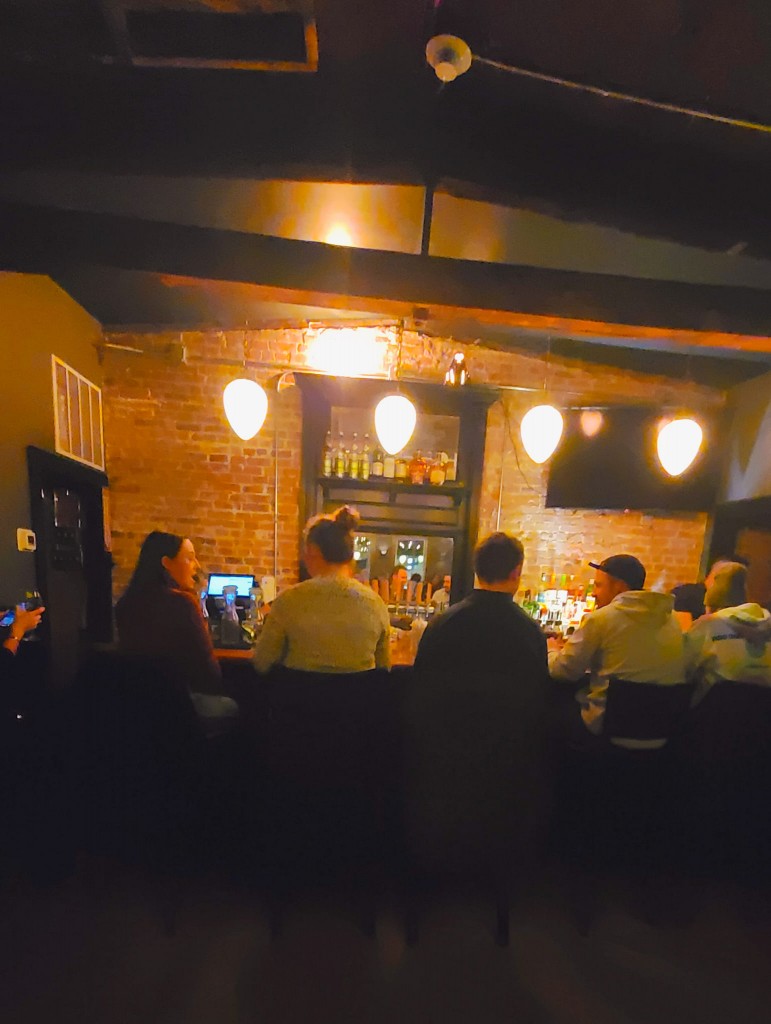 The Red Door has opened both the first and second floors five days per week, Thursday to Monday from 5 p.m. to 1 a.m.

Phil’s cousin, Chris Martelly, is also a co-owner. He’s built a reputation as a craft beer sales rep for Craft Collective and before that Atlantic Beverage Distributors. Patrons will see Chris Martelly behind the bar on most nights with head bartender Michael Conner (most people call him Conner). Conner has previous experience opening a bar in New Bedford, Massachusetts, with Rhode Island’s own Cocktail Guru, Jonathan Pogash.

In the kitchen is Jimmy James Caruso, who used to work at the Fez back in the day. He also ran his own popup Dreadnaught, and tapped into his talents for putting a twist on Saugy Dogs. The Red Door is serving them all different ways, including the failsafe kraut with brown mustard and curry ketchup with onions to the palate-pushing Jiro’s Nightmare, topped with imitation crab, furikake and miso cream cheese.

“We love the idea because it’s something different,” Chris Martelly says. “Having crab on a hot dog sounds a little wacky, but then I tried it, and we were like this is really good and really interesting.”

They also have seasonal shareable plates for veggie-lovers and carnivores alike, including vegan pakora with shredded seasonal veggies (carrots and turnips, napa cabbage and spinach, fried and served with green curry), crispy confit chicken legs, English-style meat pie, borscht, a carrot salad and tiki beef with a huli huli marinade, preserved lime, and a pineapple sambal chutney. The menu will change with the seasons along with the cocktails.

“We have the opportunity with two floors to give people the opportunity to enjoy escalated comfort food,” Chris Martelly says. “Downstairs is a full-service seated restaurant. Upstairs is a little more laidback. You can come in and sit wherever you want, move tables around, stand or sit at the bar.” The cocktails and beer menu is the same for upstairs and downstairs, but the upstairs has a more limited food menu. 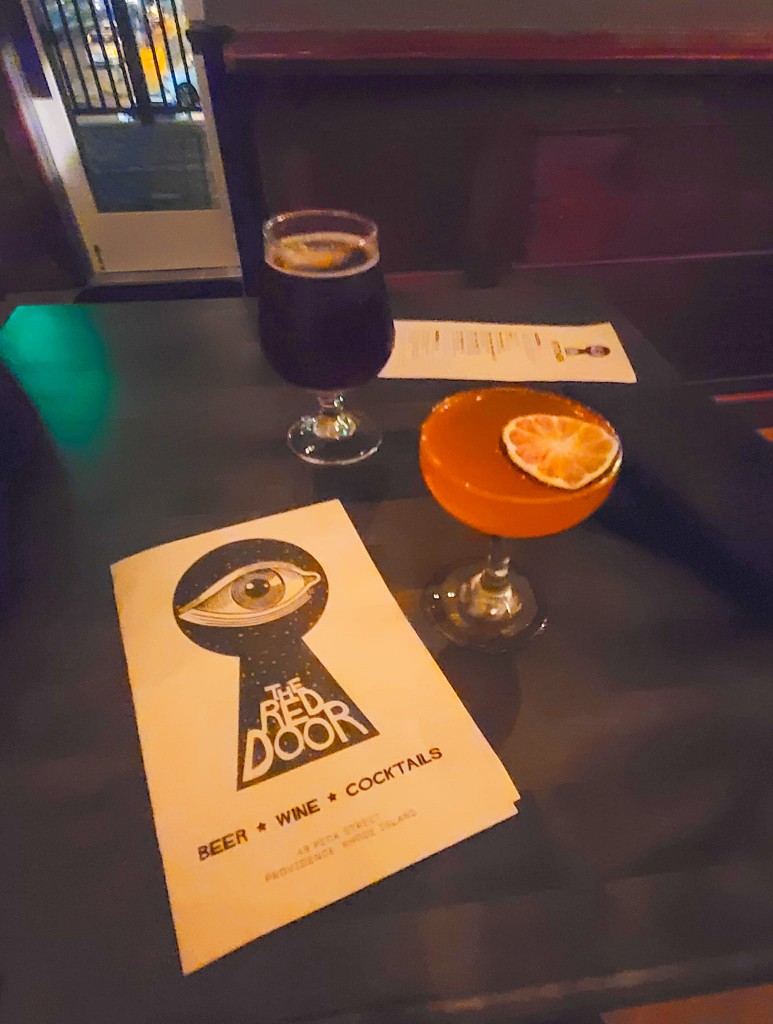 You and Yours cocktail at the Red Door with mezcal, aperitivo, citrus, chartreuse, smoke and peach.

They have opened during a challenging time, not only because of the pandemic, but also because they launched around the holidays.

“We’ve had an awesome response so far, especially this week, seeing downstairs open as well. There’s a different feeling down there with lighting and atmosphere,” Chris Martelly says. “For so long, I’ve pictured what it’s going to be like to have people in there. Until you actually see it is when it feels real.” 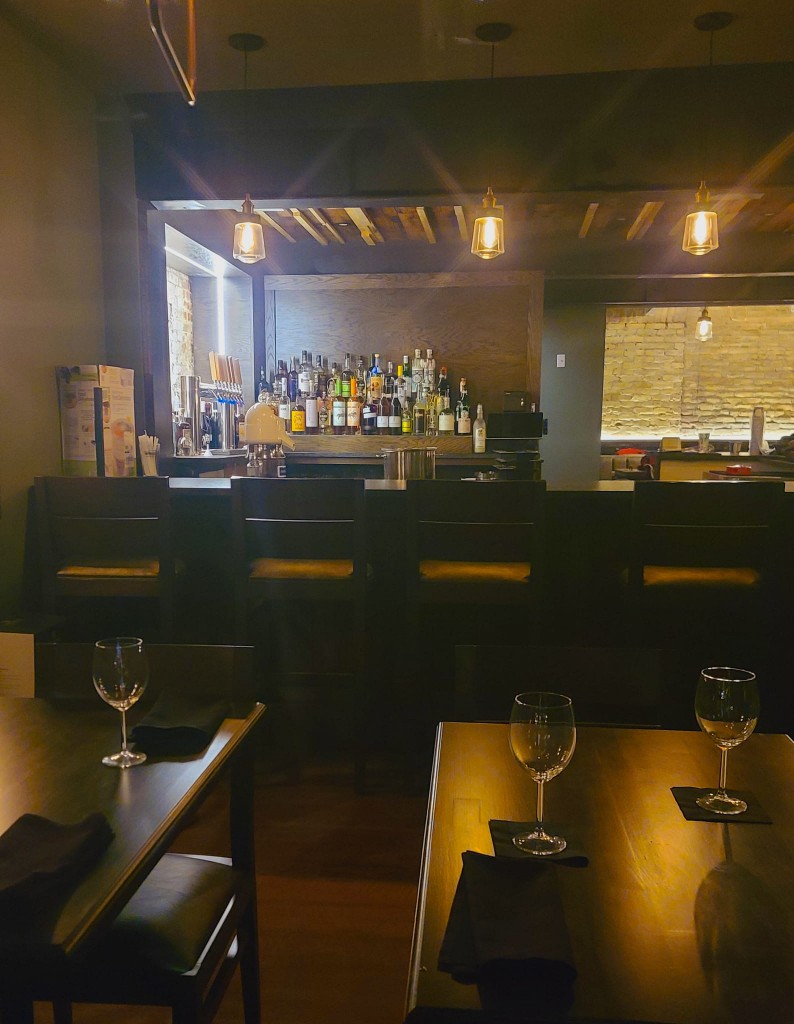 They also recently launched a Monday jazz night from 7-10 p.m. “Not dinner music, but really good, extremely talented jazz musicians,” says Phil Martelly. “I used to frequent Bovi’s Tavern to see the John Allmark Jazz Orchestra. I loved the small venue with incredible music. This is my selfish night to enjoy great tunes and have a few drinks.”

The Red Door is open to a world of possibilities.

(Not) At Your Service: How public-facing restaurant staff are faring in the high-stress, ever-evolving world of pandemic dining.