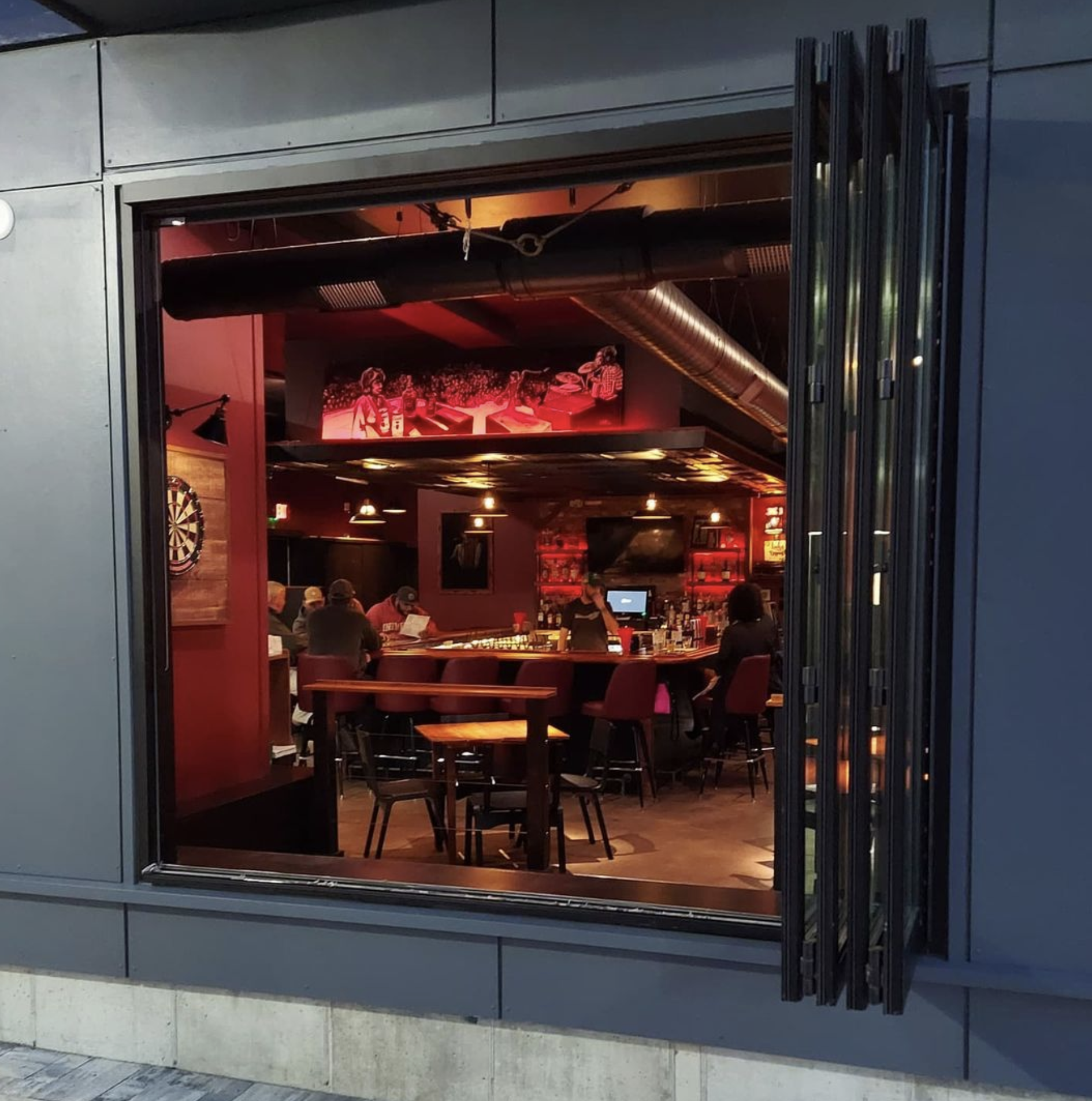 There’s a new beer-and-a-shot joint in Providence. Coined the “oldest new bar in Providence” by the co-owners – renowned bartender Vito Lantz and restaurant industry veteran and former wine and spirits insider Art Chamberland – Lucky Enough is located in a brand new building, but everything inside of the spot tells a tale of another time and place.

It starts with the horseshoe bar with the brick backdrop and continues with the horseshoe beer tap handles and collection of vinyl records and turntable, which add to the atmosphere. The bar was built by Chamberland out of reclaimed wood from a barn in Johnston, as well as the community tables, which were also constructed from repurposed wood. 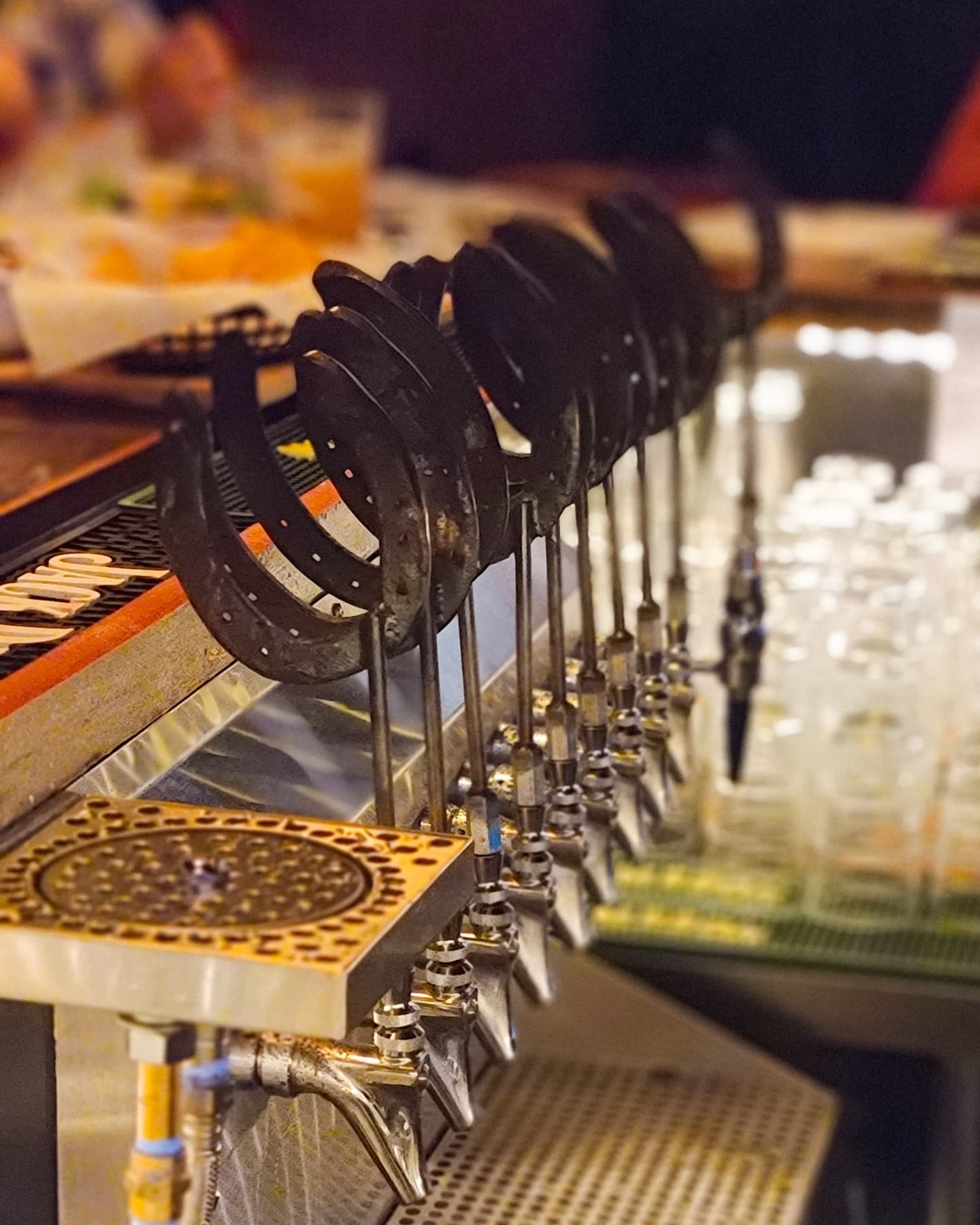 “Underneath the clear coat on the bar, you can see parts of the wood are charred from a fire they had at the barn, and where the hinges were on a door,” Lantz says. “It’s gorgeous wood that tells a story.”

The 100-year-old bricks on the backbar were found in the basement of Durk’s Bar-B-Q, which used to be the Satin Doll. A tin ceiling was installed above the bar as well. The record collection filled with classic and indie rock is displayed on a bookcase, and patrons are invited to go over and select records to play at the bar, or they can bring in their own to share on the turntable.

“We both are fans of vinyl and grew up listening to records, and I consider myself an audiophile.The sound has such a richer and warmer tone,” Chamberland says. ‘People know when a record just went on. It changes the vibe of the place.”

“There’s something about vinyl that fits in with what we’re trying to do here,” Lantz adds. “Having the fuzzy bumps and skips makes you feel comfortable and at home. A record is going to skip and it’s going to be hilarious. And the smell of a vinyl record brings you back. Before the shift, my favorite part of working here is going through and selecting what to play for the night.”

So many other details of the place go back to a bygone era, which is funny since the building is brand new. In fact, Lucky Enough was supposed to open at the end of 2019, but there was a big delay in the construction of the building around the electric service.

“It turned into a six- or eight-month ordeal that pushed the project back. By the time they resumed, it was really late in 2019. Then they got going for a couple of months and stopped because of COVID in early 2020,” Chamberland says. “Without that delay, we would have realistically been open in November or December of 2019.”

But that delay turned out to be a blessing in disguise. It made the name of the bar even more of a perfect (and ironic) fit. They had already named it Lucky Enough even before the construction began. Lantz named it after a “lucky enough” lyric in a song he heard at a concert called “If It Rains,” by Reed Foehl.

“It’s almost like the name guided us through it,” Lantz says. “My wife and I were hanging out after the show and we met the artist, and I said, ‘Man, that’s such a great name for a bar.’ Reed said, ‘yea, you should open one and I’ll come play.’”

Lantz held the name in the back of his mind until the time came to open a bar. And then just enough luck stepped in. “It seemed like everything that happened, even the bad luck, was good luck,” he says. “The horrible infrastructure of Providence actually saved us. If they didn’t have that power problem and we had opened before the pandemic, we would have lost everything we had saved to try to do this.”

While it was a long time coming, the bar is now celebrating a month in business. They have a great chef, Adam McGrath, who previously worked at Rogue Island in Providence. The menu features steak-and-cheese and brined chicken sandwiches, fun bar snacks and boards, and specials like steamed and fried buffalo-style potatoes with blue cheese dipping sauce. The drink menu is curated by Lantz and features a beer-and-a-shot menu and cocktails named after lyrics in songs.

The beer-and-a-shot concept stems from Lantz’s Midwest roots and food and drink industry history. “That’s the industry thing to do after work, have a beer and a shot and decompress and chill out,” Lantz says. “You’ve been serving people for five or six hours and living that restaurant life. It’s nice to come to a place and have a good beer and whiskey.”

They pay tribute to old school favorite beers like Guinness and Pabst Blue Ribbon, but they also have fancy craft brews for beer nerds. And as for the cocktail names, Lantz has taken his own creative spin rather than borrow from renowned drinks he created for other bars in the past.

“When I create drinks for a place I work, it remains theirs forever,” Lantz says. “I am known for the names of drinks, so this was a fun twist to do a very specific lyric from a song that ties into the ingredients of the drinks and brings it back full circle.” 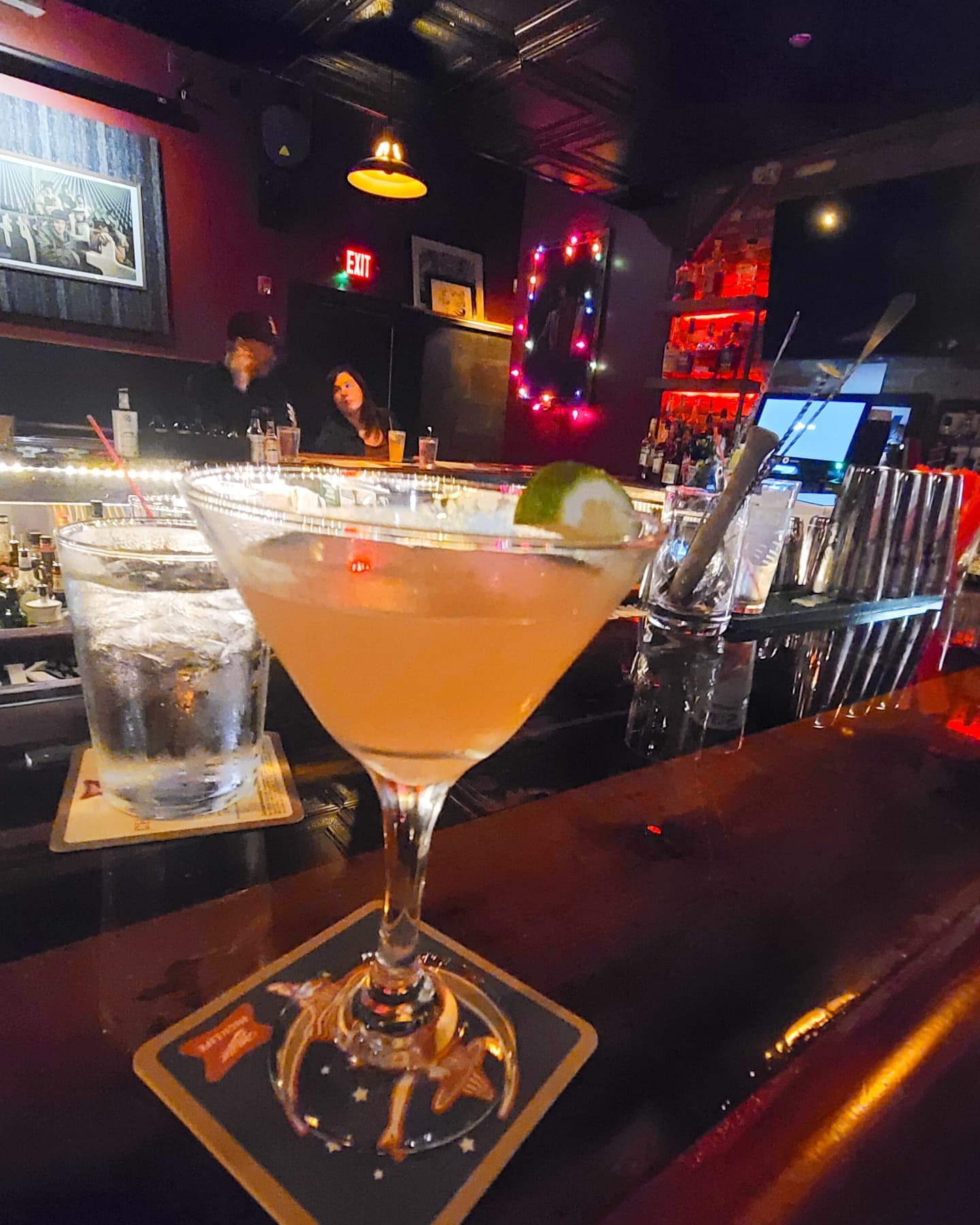 “The Corner Between Sanity and Madness.”

One that he is most proud of is “Do You Hear Me Major Tom?”, which is a vanilla orange screwdriver, creamsicle-type drink made with Tang.

“He was giggling like a mad man when he made it,” Chamberland adds.

“It was the least mixology thing I’ve ever done. It was a silly idea and it worked,” Lantz adds. “The lyric from the tune made sense so I tried to bring everything together. The people who get it, dig it, and some other people are like ‘your names are too long. My lips get tired saying your menu.’”

Lucky Enough is throwing a grand opening celebration on Saturday, Dec. 18, which also happens to be Keith Richards’ birthday. They’re promoting the party as “Keith Day,” and they’ll have Jack Daniels specials and they will give away some J.D. swag like glassware, T-shirts and hats. They plan to play Rolling Stones songs and classic rock, and may even have some live music covers.

“It’s going to be a super fun hang. I have so much Stones on vinyl,” Lantz says. “We work hard at taking the fun completely off your hands. You walk in the door and let us figure it out.”

Tales from the Bar

Archive: Mixing Up Drinks with the Dorrance’s Vito Lantz