The New Clementine’s in East Greenwich Is Worth the Wait

After first setting up shop on Main Street in 2017, the owners of Clementine's Homemade Ice Cream have moved to a new location on South County Trail. 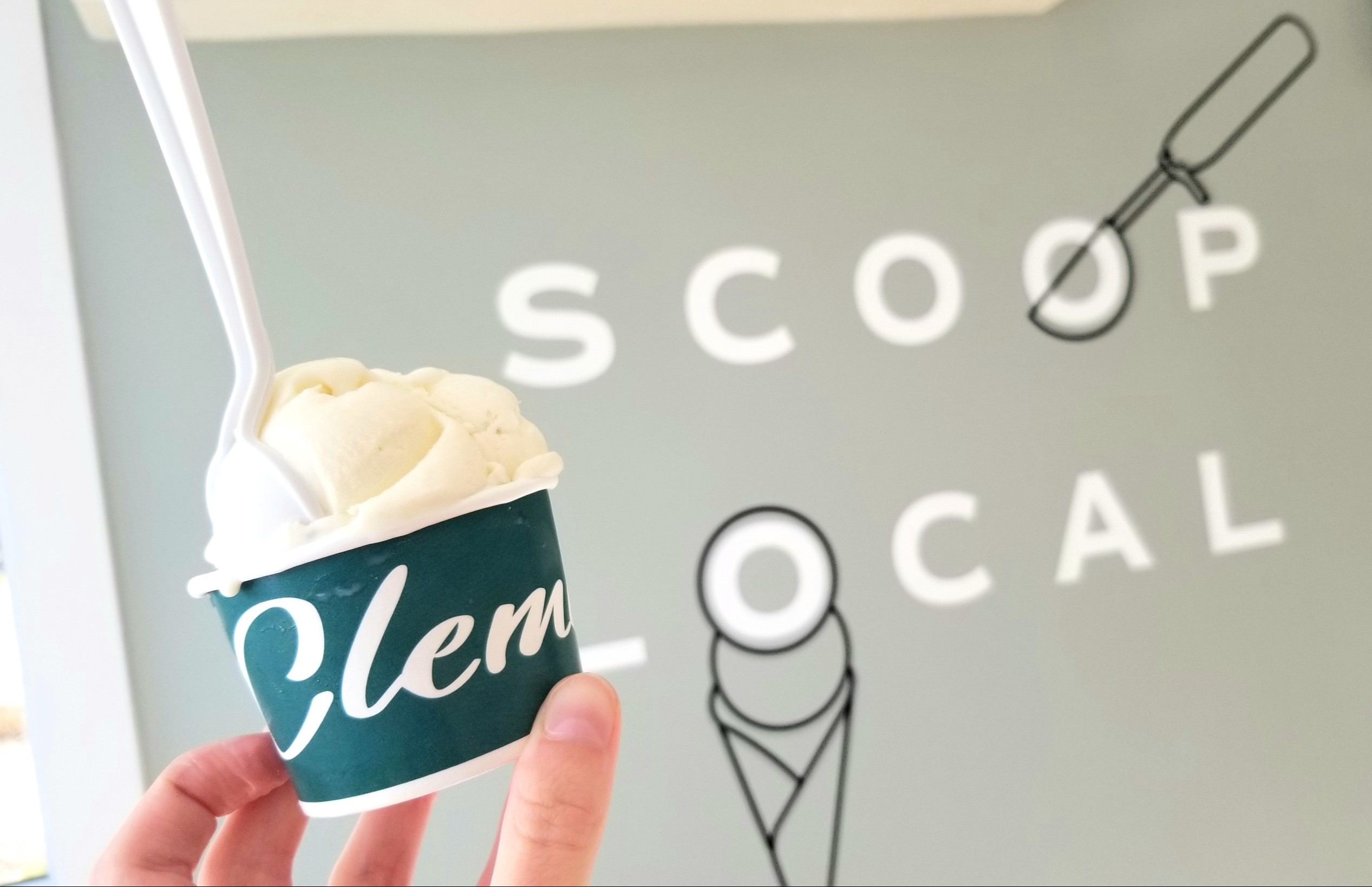 A sampling of banana ice cream at the new East Greenwich location.

When Warren and Jess Sternberg closed the doors to Clementine’s Homemade Ice Cream in East Greenwich for the season last fall, none of their customers knew it was the last time they’d visit the original Main Street location.

But all good things must come to an end, and in June, that ending made way for a new beginning with the opening of a brand-new Clementine’s on South County Trail.

Warren, who spoke to Rhode Island Monthly by phone while whipping up a fresh batch of black raspberry sorbet at the new location, says it was a combination of parking issues and an expired lease that drove them from the shop’s original home.

“We love Main Street, it is a great community, but we felt that the parking situation unfortunately was not going to get better and was difficult for an in-and-out business like ours to really continue to grow,” he says.

Last fall, Judy Harris, owner of the iconic Beacon Diner, announced her retirement from the East Greenwich mainstay after more than twenty-five years. The property — with its ample parking and standalone location on South County Trail — proved the perfect opportunity for Warren and Jess. After several weeks of renovations, the East Greenwich shop reopened in its new home on Thursday, June 23. Crowds of customers eagerly anticipated the opening on social media and poured in to test out the flavors in the new space.

“It’s been busy, which is a good thing,” Warren says. “I’ve had a really good turnout of people. I think people are excited that we’re getting back open. It’s a late start to the season, but I’m excited to be going now.”

The Sternbergs first opened Clementine’s in 2017 with the goal of delivering quality, homemade ice cream in a family-friendly location. Warren, a native of North Kingstown, had worked at Brickley’s in Narragansett growing up and already knew the ins and outs of the ice cream business. After working in the corporate world for five years, he and Jess decided it was time to take the leap.

“My wife and I kept going back to opening a small business, an ice cream shop in particular,” he says. “It was kind of something we always talked about and one day just decided to go for it.” 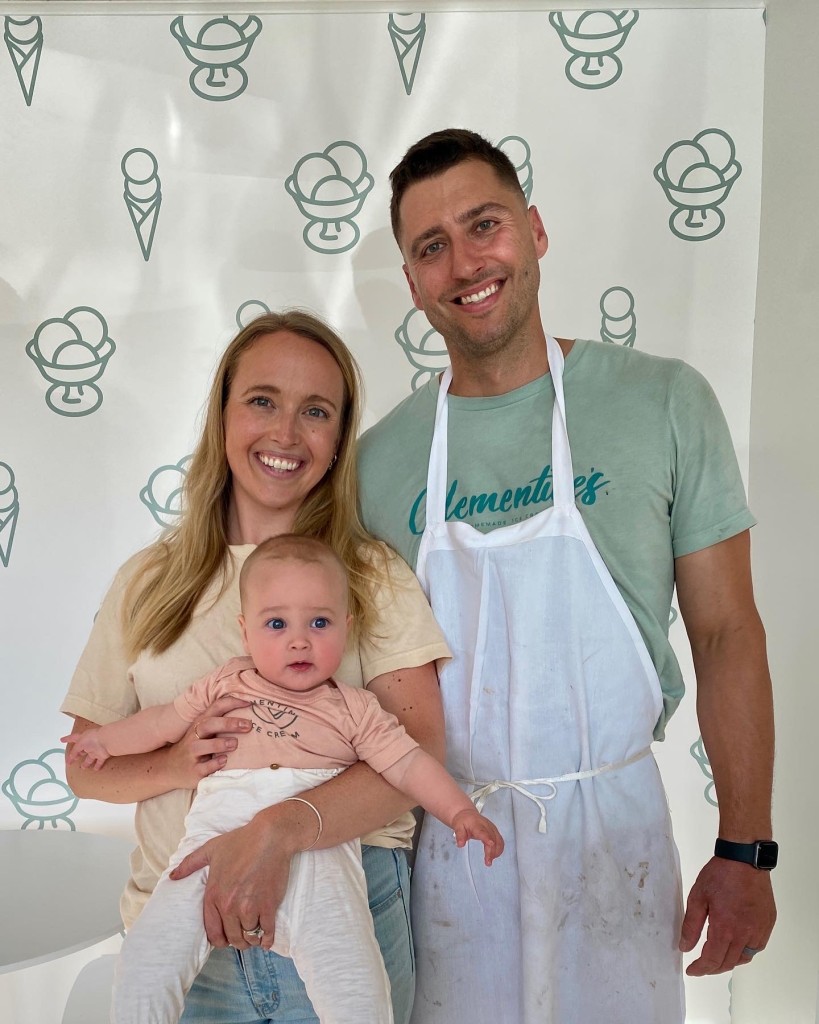 Their ice cream, a creamy mix of 16 percent butter fat with fun fill-ins like Coffee Heath Bar and Butter Brickle, was an instant hit. Fans quickly turned out for fresh-scooped helpings of Cookie Dough — the most popular flavor — and seasonal favorites like Apple Pie and Pumpkin Cheesecake. The shop’s Oatmeal Cookie flavor was even selected as the best ice cream in Rhode Island by Food Network Magazine in 2021.

In 2020, Warren and Jess made another leap when they opened a second Clementine’s location on Wave Avenue in Middletown. The Newport County location quickly gained its own following as it introduced a new neighborhood of Rhode Islanders to their classic ice cream flavors (though a few flavors, including Chocolate Coconut Almond and S’mores, are only available at the East Greenwich location).

Eventually, Warren says, they hope to move all production to the East Greenwich location.

“What we hope to have is a really community kind of spot and a place that people over the years can continue to go to and have their families grow up eating our ice cream,” he says.

Like other food business owners, Warren says Clementine’s has faced the crunch of supply shortages and cost increases. The black raspberry sorbet, he says, was an improvised offering after the usual puree they use to make their signature clementine sorbet was unavailable.

Thankfully, he says, most of the shop’s staff has been with them for five or six years, so the business has not been hit quite as hard by the staffing shortage.

The shop gets its name from Clementine, a beloved chocolate lab who passed away the year after it opened. Customers can still find Clementine’s picture, along with pooch-friendly ice cream made from plain or banana frozen yogurt sprinkled with dog biscuits, paying tribute to her inside the East Greenwich shop.

Warren says patrons should follow the business’s social media for seasonal and holiday-themed flavors. And those who miss the Main Street location should keep an eye out for the Clementine’s ice cream cart, which will be making appearances this summer.

Despite a whirlwind few days, he says, all is good in the new Clementine’s home.

“I think people really like the new space. They like the outdoor area and the outdoor seating. All the feedback so far has been good.”