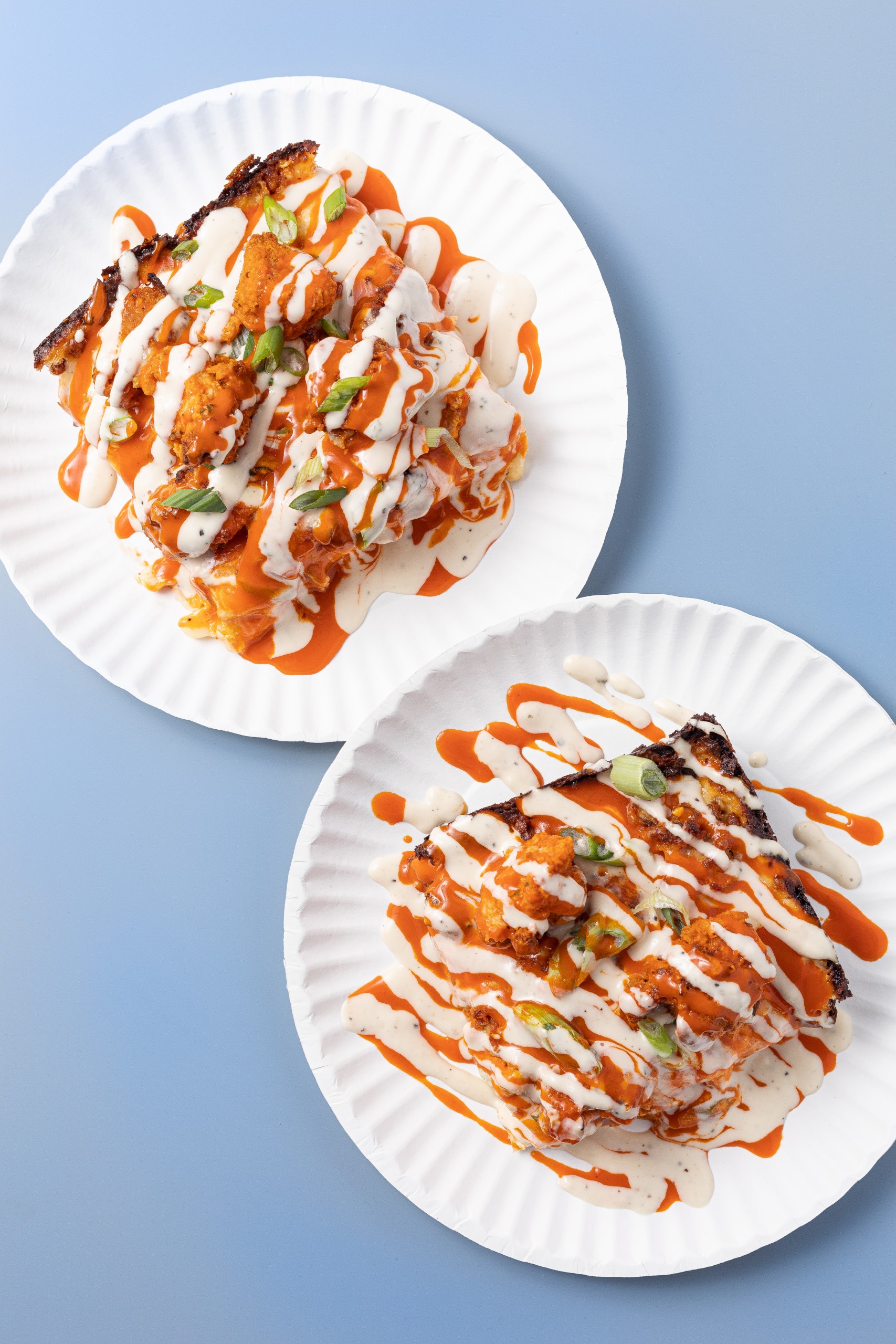 Pizza slices by A Guy and His Pie. Photo by Kimberly Cauti @prettydeliciouslife.

During the pandemic, Brian Cauti put down his drumsticks and picked up a pizza pan. The former drummer in local bands, such as, Mad Passenger, Royal Street and Lions Lions, and drum tech for Bad Rabbits, looked for a new hobby to take on when his latest band stopped touring in 2020. He found solace from boredom in making topping-stacked pies for friends and family. But not just any pizza: His specialty is the thicker, cheesier square pizza with caramelized lacy crust that is specific to Detroit style. Cauti says this style was originally perfected by Detroit’s automotive workers who once used steel parts pans to bake their pizzas, and not many people were making it around here.

At the time he started playing around in the kitchen, Cauti was also working as an audio engineer for MIT, which kept him employed during the onset of the pandemic. He had been used to commuting three hours a day to Cambridge, and when he suddenly found some extra time, he decided to start the pizza side hustle. Since he was a one-man show, he named the business A Guy and His Pie and created an instagram account to sell it to friends, family and new fans.

Cauti teamed up with his friend Paul Kettelle at PVDonuts to do popups out of their commercial kitchen. One day they did a special event where they handed out slices of his pie, and announced it on Instagram. “We posted on our account that we were giving away free pizza and then PVDonuts posted it in the moment, ‘Get here as soon as you can, we’re giving away free pizza,’ and a ton of people showed up,” Cauti says. “That was the first way of getting it into people’s hands.” Buns and Bites food Instagram account also shared his pie and before he knew it, he had a wait list of 400 orders, because at the time he was only pumping out pizzas one night a week. 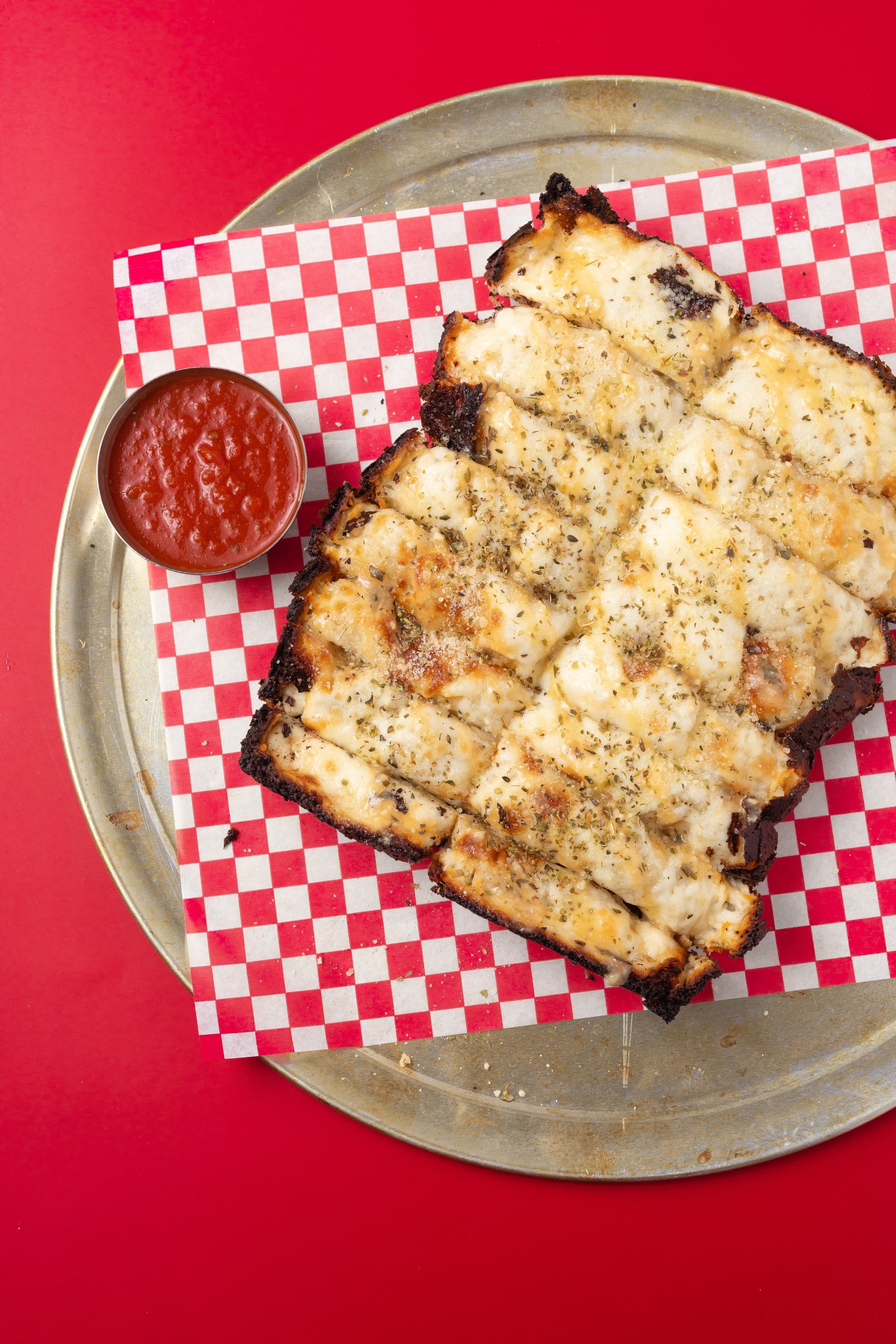 As the business grew in popularity, he knew he needed his own kitchen space. He had previously worked with Ming’s Asian Street Food in the Lorraine Mills in Pawtucket, and learned they were moving to a bigger space in the mill. Cauti teamed up with Jonathon Kirk of Masa Taqueria and they decided to split time and share Ming’s former kitchen, which they lease from Chi Kitchen. Cauti focuses his time in the kitchen when the adjacent Crooked Current Brewery and White Dog Distilling are open to serve guests, while Kirk serves Masa tacos out of Rock and Rye.

Cauti realizes the value in collaborating with so many other small businesses. “Working with PVDonuts gave me the idea to collaborate with as many restaurants in the city as possible, turning their menu items into pizza,” he says.

A Guy and His Pie did another PVDonuts collaboration by turning pizza dough into a giant doughnut to make a maple bacon pizza. Cauti and Kirk busted out a quesabirria taco-themed pizza together in their shared space. Cauti also formed a relationship with Sam Glynn and Tanner Larkin of Chomp Kitchen and Drinks, and they came up with a Chomp-inspired burger pizza, topped with ground beef, bacon, shredded lettuce, special Chomp sauce and their housemade pickles and onion. He also ran a special collab with the former Dump Truck (now Mama Lasagna’s), which created clam-filled dumplings that they used to top a pizza. Every week, he’s running some kind of special pizza in addition to the regular menu which includes more mainstream varieties like pepperoni, buffalo chicken and three-cheese and basil. 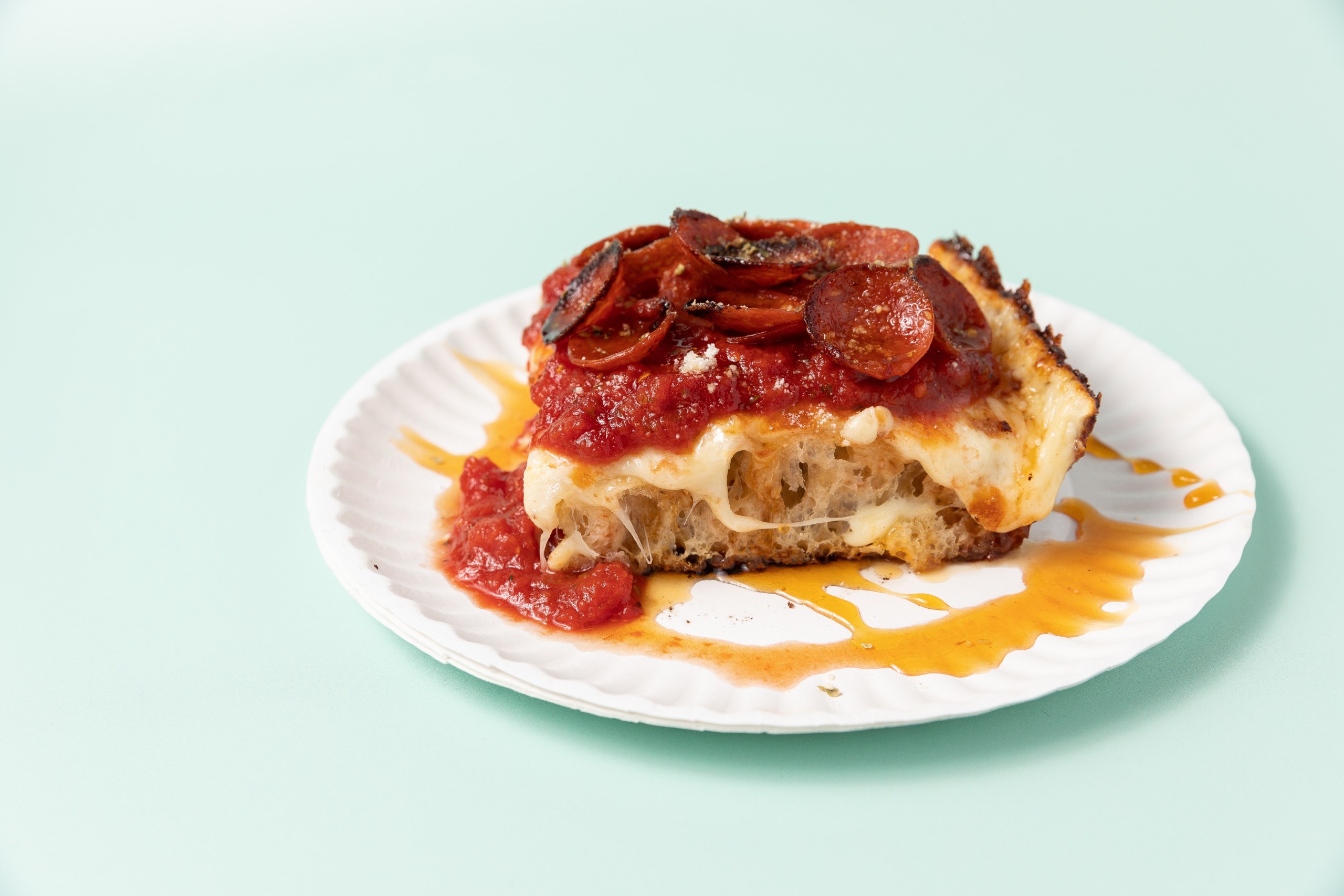 Once he got into the commercial space, Cauti realized he could leave his job as an audio engineer to focus on the business 100 percent. In some instances, he still had a wait list to order pizza, so this enabled him to increase production and hours of availability. Now you can get a pizza from A Guy and His Pie on Wed. from 4-7 p.m.; Thurs. and Fri. from 5-8 p.m.; and Sat. from 1-5 p.m. The menu and ordering drops at noon every day they are open.

“I leave ordering open all night until I sell out or a half-hour before I close,” he says. “I started doing QR codes at the brewery so people can order my full menu or I will also do slices specifically for the brewery.”

Cauti loves running his own business because he says he’s able to better manage his work/life balance. He’s only open four days a week, because as the pizzeria’s single staff member, that’s about all he can manage right now while still maintaining a life outside of work, which also involves a newfound love of endurance cycling. He recently rode trails and back roads all the way from Providence to his mom’s home in Vermont, which took him about twelve hours.

“One of the things I told myself is that I still need to have a healthy work and life balance, because it’s really important to me,” Cauti says.

He says while he is still a one-man show, he’s thankful to his girlfriend for helping him out with logo design and at pop ups, and his sister, a food blogger at @prettydeliciouslife, shoots photography and contributes to social media. His brother-in-law has also pitched in for service, too. He does have bigger goals, but not quite yet. “I’ve been looking into a food trailer or my endgame would be a brick and mortar,” Cauti says. “I have a lot of ideas that need to come into play. I would love to have an actual restaurant with a bar and a cool vibe and have people come and hang out.”