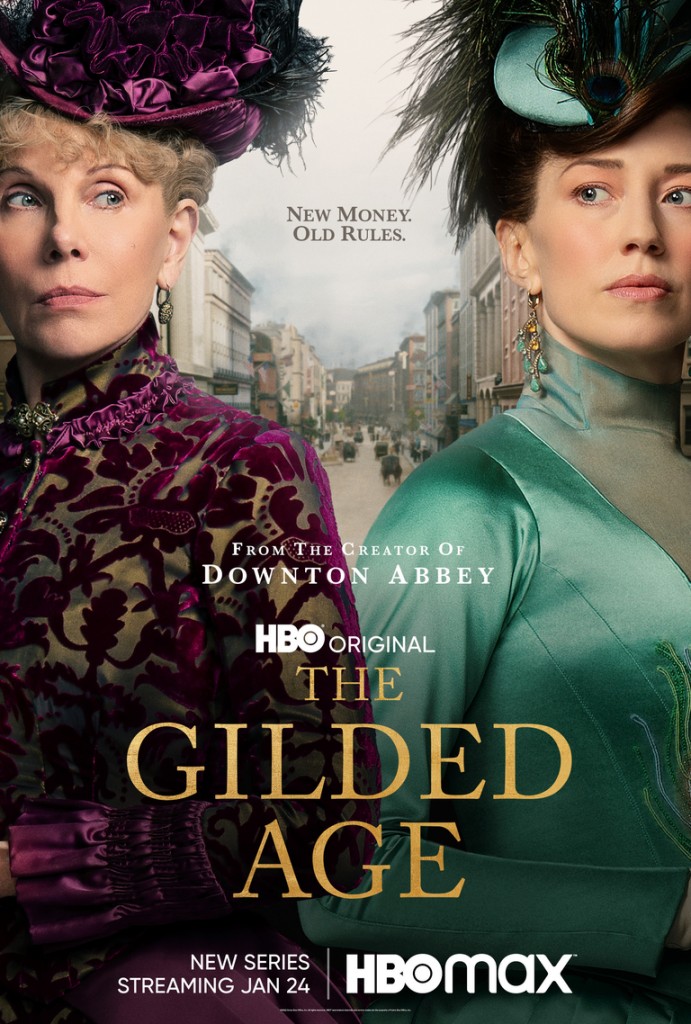 “The Gilded Age” airs of HBO.

Fans of “Downton Abbey” had a treat this week with the release of “The Gilded Age,” creator Julian Fellowes’ latest look at the maneuverings of society’s upper crust. The show, which premiered on Monday on HBO and HBO Max, is set in 1880s New York, where the city’s old money elite are trying to stave off the advances of a new class of social-climbing industrialists. Marion Brook, a newly penniless high-society girl played by Louisa Jacobson (daughter of Meryl Streep), arrives in the city to join her aunts just as a rivalry is brewing with the new-money neighbors across the street.

While “Downton Abbey” gave us Highclere Castle and sweeping shots of the English countryside, “The Gilded Age,” true to its name, filmed many of its scenes in the Newport estates that served as summer playgrounds for the period’s real-life elite. Sharp-eyed viewers on Monday might have spotted the kitchen at the Elms, which stood in as the kitchen of the fictional Bertha Russell and her railroad magnate husband, George. The music room at the Breakers is also expected to make an appearance as the Russells’ ballroom, while the lawn of the Ledges, with its views of Narragansett Bay, will feature in a scene set in Newport.

According to the Preservation Society of Newport County, at least six area mansions will feature in the show before the season’s end, including Marble House, Rosecliff, Chateau-sur-Mer, Hunter House, the Breakers and the Elms. Other Rhode Island locations featured in the series include the Clouds Hill historic house museum in Warwick and School Street in Newport. 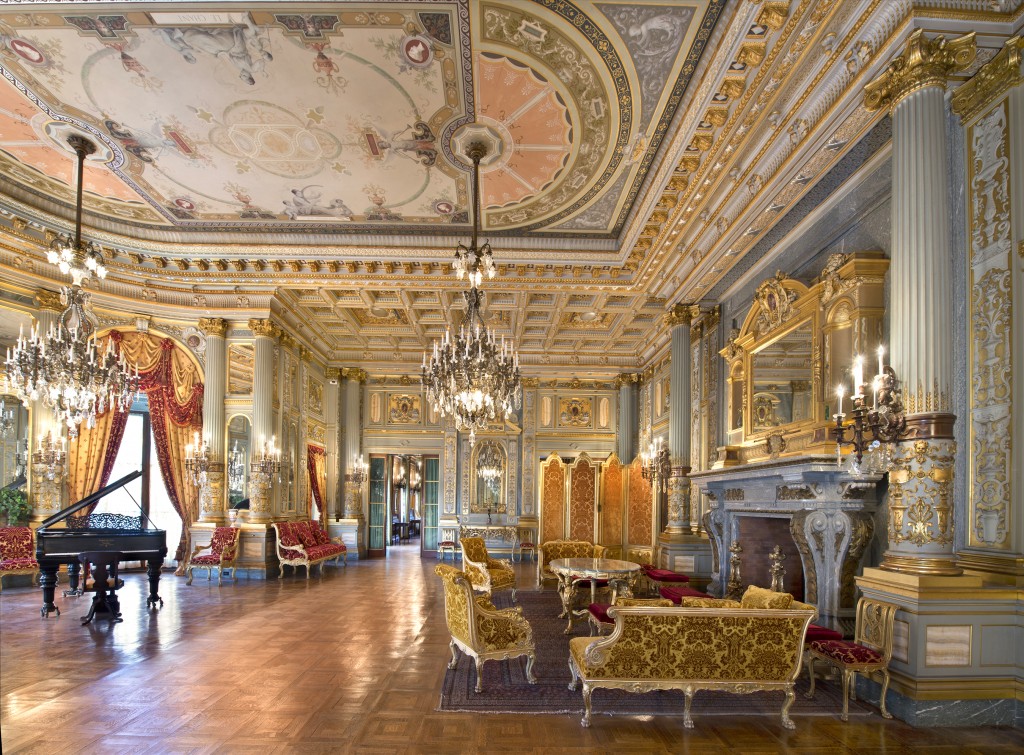 For those who can’t wait until next week to dive back into the opulent lives of the nineteenth century’s well-to-do, the Preservation Society of Newport County is hosting a virtual lecture series so viewers can learn the history behind the extravagant settings. The series kicks off on Thursday, Jan. 27, at 6 p.m. with “Naming an Era: The Gilded Age as Novel and Nom de Guerre.” Mark Twain historians will discuss how the term originated in an 1873 novel by the author and co-writer Charley Dudley Warner and how the period is often misunderstood today. Next month, participants will hear from an internationally renowned gilder on the technique behind the history book term followed by a third presentation from the society’s curator of collections, Nicole Williams, on the Gilded Age in America. All lectures are free, but pre-registration is required. More information about the lecture series is available on the society’s website at newportmansions.org.

Keith Stokes of the Rhode Island Black Heritage Society will offer a different view on the Gilded Age era when the Newport Art Museum presents Newport Gilded Age In Color on Tuesday, February 8, at 5:30 p.m. at the Griswold House on Bellevue Avenue. Stokes, who also serves as the director of economic development for the city of Providence, will discuss the untold and sometimes mis-told stories of families of color and means who lived and worked in the city by the sea, exploring their civic, cultural and political life. As part of the lecture, he’ll reconstruct Newport’s significant African heritage neighborhoods and share images of people enjoying Newport’s attractions, including meeting in some of America’s earliest African heritage tennis and literary clubs. In-person registration for the lecture is full, but participants can follow along with a free live stream by registering here. 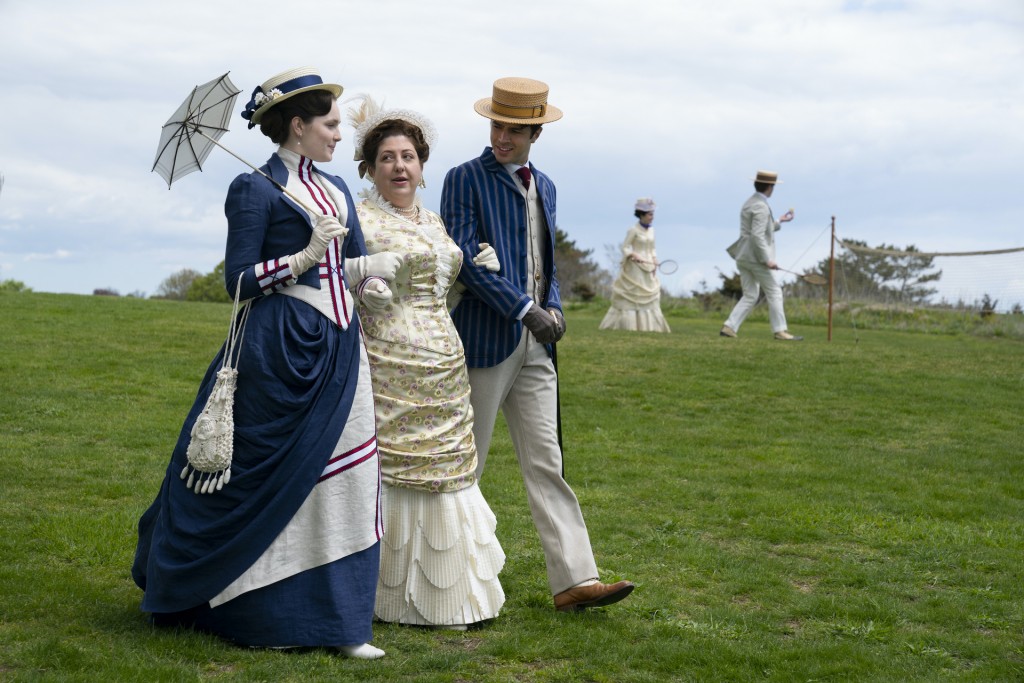 Amy Forsyth, Ashlie Atkinson and Harry Richardson stroll across the lawn of The Ledges in HBO’s “The Gilded Age.” Photo by Alison Rosa/HBO.

The Preservation Society of Newport County also notes that The Breakers remains open for tours, with both regular and children’s audio tours available to download on your smartphone as you peruse the former summer home of the Vanderbilt family. Tickets and scheduling information is available on the organization’s website.

Exploring the Newport Mansions with Kids

House Lust: One of Newport’s Last Great Gilded Age Estates is on the Market