Co-owners and friends Christopher Bender and David Crowell have two restaurants and a wine and spirits shop under their belt, plus events and catering and luxury picnic businesses, as well as a soon-to-come bed and breakfast. 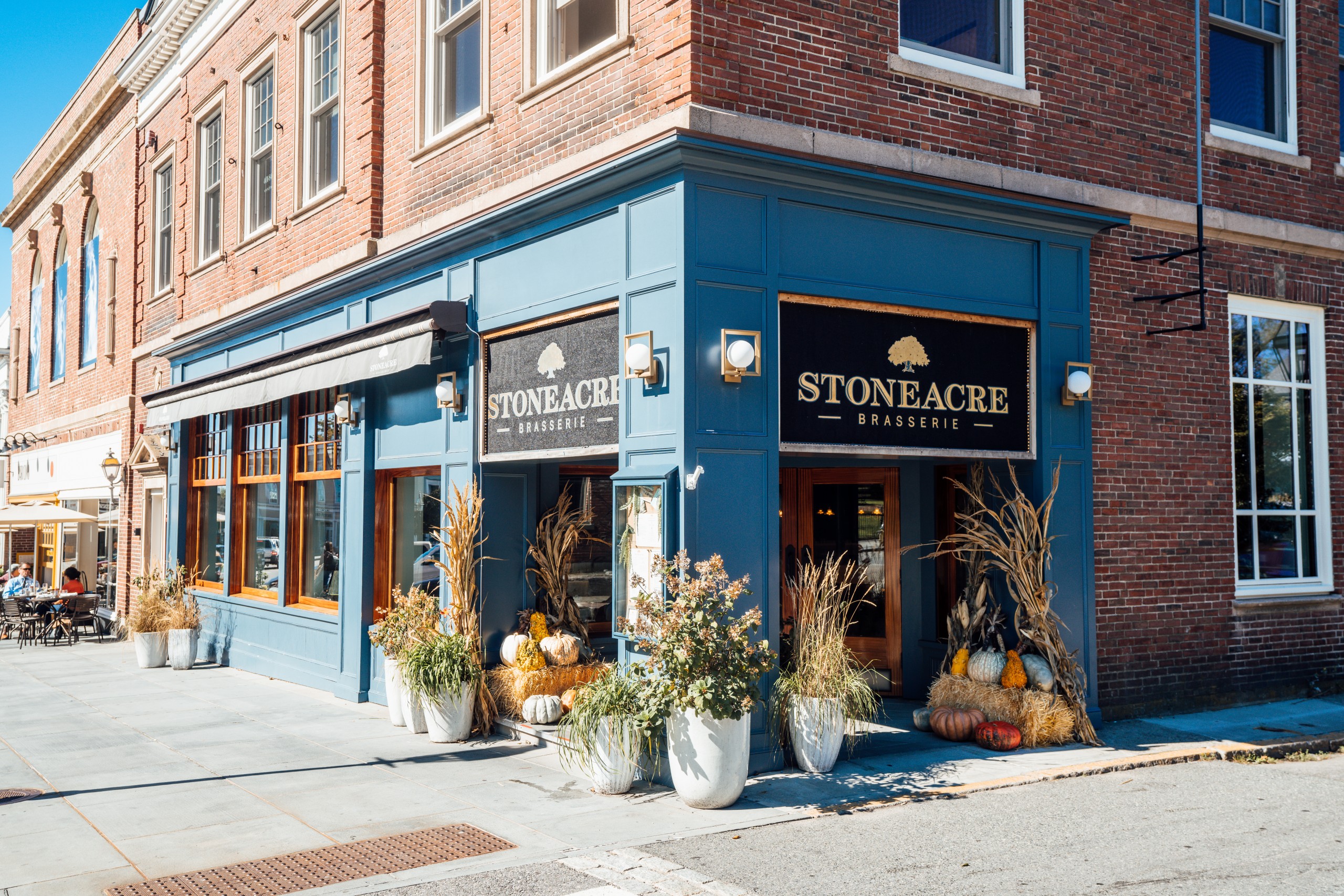 Two guys who started out as dishwashers in restaurants are slowly building a hospitality and entertaining empire in Newport. Best friends David Crowell and Christopher Bender co-own and operate Stoneacre Hospitality with two restaurants under its belt, Stoneacre Brasserie and Stoneacre Garden, plus Stoneacre Wine and Spirits shop and bespoke catering and events and luxury picnic businesses. They are also closing on a nearby bed and breakfast with more projects to come in the future.

Crowell was just thirteen years old when he got his first taste of the hospitality world by walking into Rod’s Grill in his hometown of Warren, Rhode Island, where he asked for a job as a dishwasher.

“They said you have to get a note from your mom to say you can work here, so I went home and got a note from my mom and started work the next week,” Crowell says. “My mom was like why do you need a job? You are thirteen. They let me eat a bunch of food and they paid me, plus it was the hub of the community.” 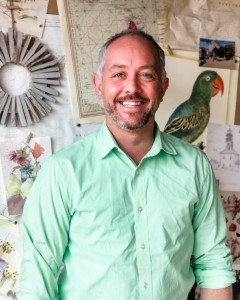 Likewise, a teenaged Bender got a job as a dishwasher and bus boy at a restaurant in his hometown of Branford, Connecticut. As time went on, he worked his way up in various hospitality roles, eventually realizing it was his destined career path, defying some family members who thought it might just be a phase. He pursued culinary arts and food and beverage management at Johnson and Wales University in Providence, and ended up meeting Crowell when they both worked at the late-great XO Cafe in Providence. Bender was a sous chef and Crowell tended bar.

The two hospitality team members became friends and worked together in a dozen different restaurants from Rhode Island to New York City, including stints at Per Se (Bender) and Gray Kunz’s Cafe Gray (Crowell). When Per Se recruited Crowell twice for a job, he turned them down. This career crossroads inspired the co-conspirators to start their own hospitality group with a casual yet elegant approach.

“My claim to fame, if there is one, is that I turned down a job at Per Se twice. The way we talk about things now is that I didn’t want to wear a suit to work every day,” Crowell says. “I thought we could serve high quality food and produce classics in a more approachable setting, which was the impetus to Stoneacre Pantry and Stoneacre Brasserie.”

After considering other locations, Crowell and Bender chose Newport to open their first restaurant together. They felt that guests should be able to experience expert hospitality and elevated cuisine no matter how they are dressed, so they set forth to create a restaurant with a high-end menu in a more casual setting. This idea first came to life as Stoneacre Pantry, which was their first intimate location that opened in August 2013 down on Thames Street. 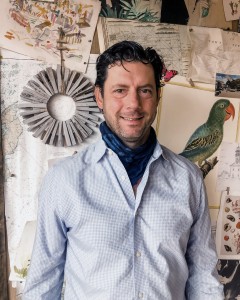 Even though they started in a tiny location, they always had their sights set on the spot where Stoneacre Brasserie is situated now. Previously, it was known as Yesterday’s, an iconic Newport restaurant for forty-two years. At the time when they opened in 2013, liquor licenses were tough to come by, but the smaller location on Thames had one available.

“We’ve always had big dreams, but I don’t think we would have been able to afford or pull off any other location at that time,” Bender says. “The smaller restaurant was beneficial because it gave us a chance to immerse ourselves in the restaurant, curate a small team that we could really develop and learn more about ourselves as operators, and also learn more about operating in Newport.”

Nearly two years later, when the Yesterday’s spot came on the market as an option for relocation in late 2015, they pounced on it. The renovation took almost two years, and while they gutted the place, they transitioned the existing restaurant into Stoneacre Pantry Wine and Spirits shop to help sustain it. They completely overhauled the larger restaurant, only leaving the original mosaic tile flooring that existed in Yesterday’s, and they hired a husband-and-wife team from 2Hands Studio to design the look and feel of the dining room and bar. The Stoneacre Brasserie menu highlights elevated French classics and an incredible brunch menu sourced from local farmers, butchers and fishermen, plus boutique French wines. 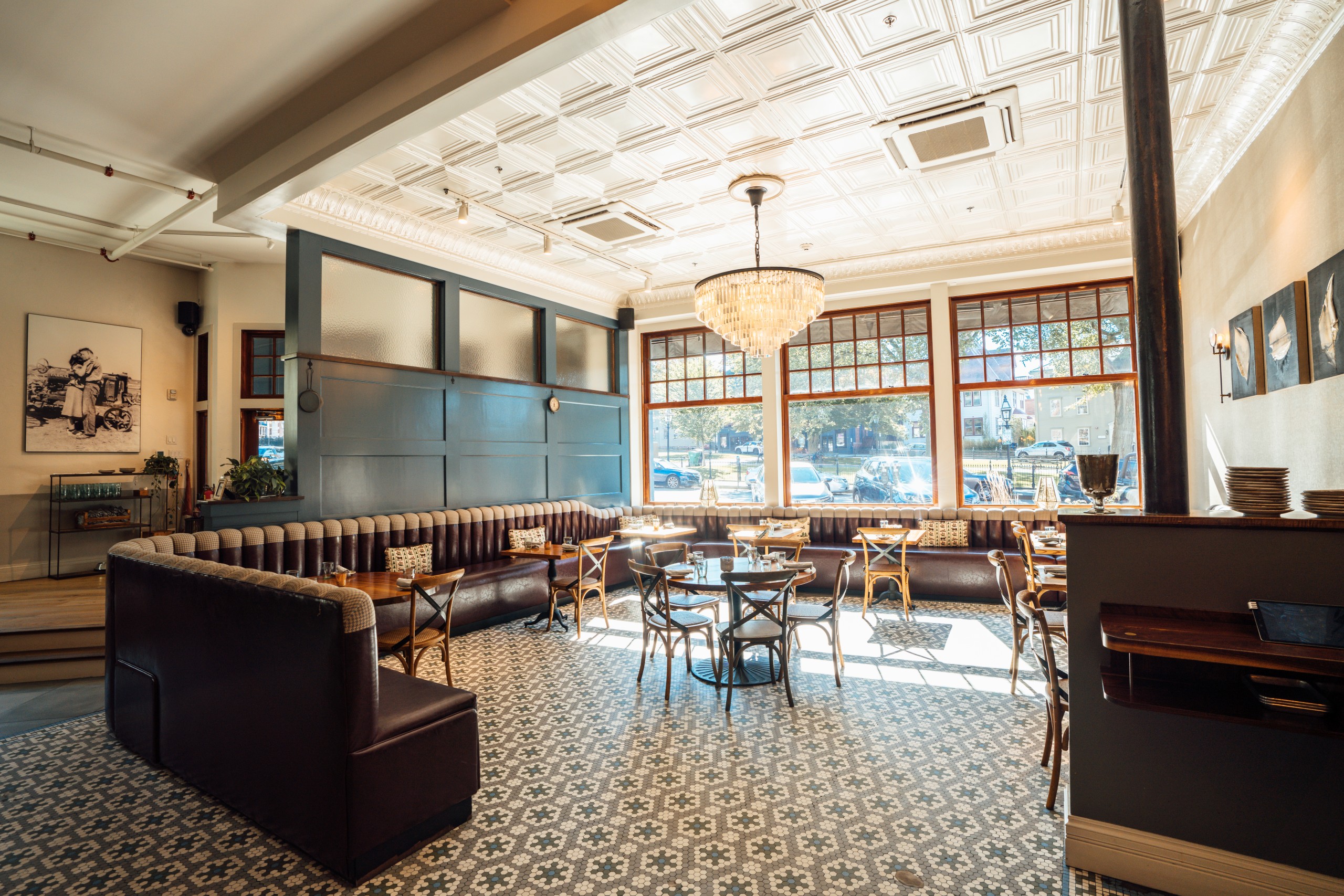 The dining room at Stoneacre Brasserie. Photo by Corey Favino.

Their Newport restaurant collection began to take hold during the pandemic in late-spring of 2020 when Bender and his fiancée, Nicole Canning, went for a walk on Rejects’ beach with their dog. They ran into a local landlord and learned that another location that had closed down, where the Barking Crab, Back Yard and the Boatyard used to be, was up for lease. Because of outdoor dining protocols during the COVID-19 restaurant shutdown, they needed more patio space other than the sidewalk in front of Stoneacre Brasserie. At the time, they had shut down the Washington Square location completely and were only serving takeout meals to hospitality staffers who were unemployed.

“We did a family meal program for hospitality workers and we expanded that program with the support of our guests and vendors,” Bender says. “We served underserved youth through the Tennis Hall of Fame. We were doing between 300 and 500 meals a week for the first handful of months, and we tapered down to 100 a week to get through the end of the year.”

When it came time to reopen, they needed more patio space, and the idea of a second location came just at the right time. They decided to sign a three-month lease for the available space. “It was going to be a summertime popup,” Crowell says with a laugh.

But they learned to love the second spot and decided to keep it. This location evolved into Stoneacre Garden with a completely different menu than the Brasserie. 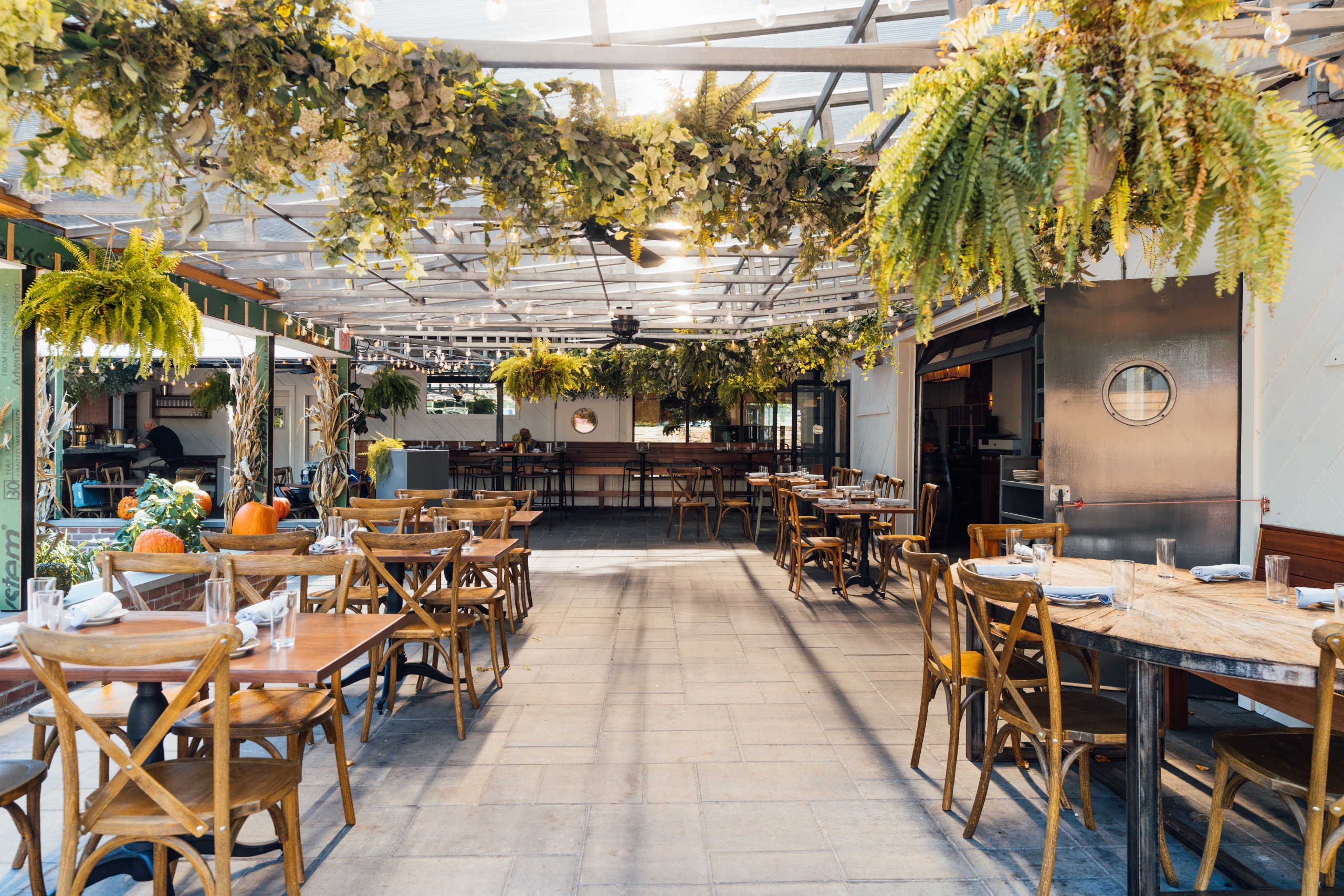 “It’s like having two children who grow up with different personalities. There’s a passion for Asian-style food, so we wanted to pursue that because we like to prepare and eat Asian food,” Crowell says. “Which is very different from the Brasserie, which features European flavors and classics. Stoneacre Garden gave us an opportunity to be more innovative and pursue a different personality as a restaurant.” 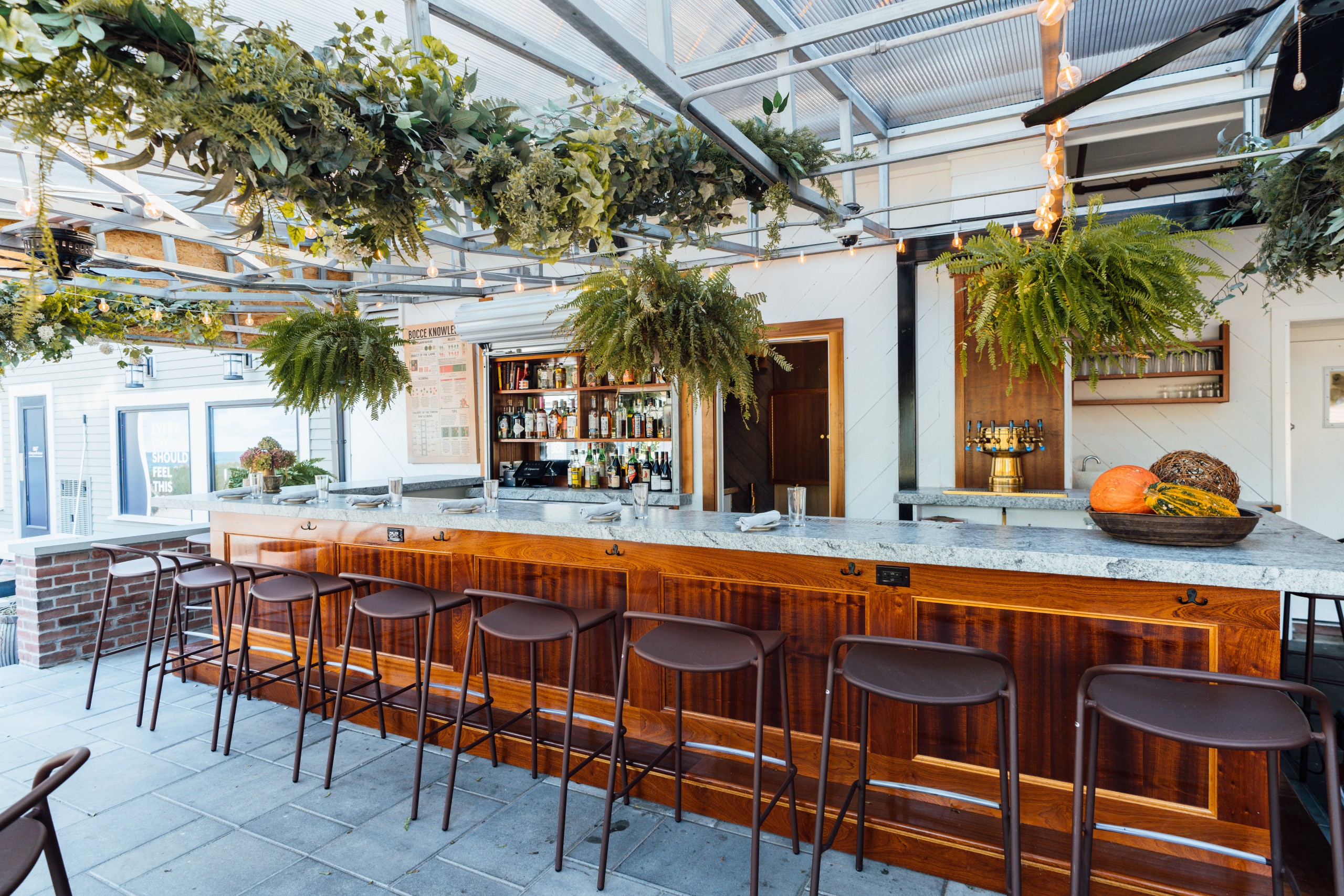 The bar at Stoneacre Garden. Photo by Corey Favino.

And as the outdoor picnic trend began to take hold, they also decided to expand into catering picnic spreads, complete with all the food and decor, tables and pillow seating in customized locations. Crowell’s wife, Christine Bevilacqua, director of sales and marketing, is heading up that end of the business, which is seasonal. Meanwhile they are also closing in on the purchase of the Chart House Inn, which will be run by Bender’s fiancée, Canning, who will be the innkeeper at the Stoneacre-inspired bed and breakfast. They hope to open sometime next spring.

In the meantime, they have launched a holiday brunch series at the Chinese Tea House at the Marble House mansion in Newport, available through December 31. The three-course, full-service seated brunch is $35 per person ($16 for children ages twelve and younger), and the menu is completely produced by Stoneacre Hospitality. Stoneacre Brasserie also recently hosted the cast and crew from the Hocus Pocus filming in Washington Square, including Sarah Jessica Parker, Bette Midler and Kathy Najimi. The restaurant shut down for five full filming days so the actors and film crew could use their space to warm up, relax between scenes, eat and do makeup touch-ups.

“Washington Square was amazing to see. It was a full-on, all-out Hollywood production right outside our front door,” Crowell says. “There are not a lot of restaurants or opportunities for space that have the availability to do it. We had Hollywood right here.”

And by the time Hocus Pocus comes out, Stoneacre Hospitality will open the Chart House Inn and be able to host overnight guests who are drawn to Washington Square to see where the movie was filmed.

As Stoneacre Hospitality continues to grow, Bender and Crowell are most proud of the team they have created. “We started a very small restaurant with fifteen employees and now we have 120 people employed (in peak season),” Crowell says. “In these times, having a restaurant or hospitality group giving back to the community by providing jobs is most important to us. Good food and wine is great, but providing lifestyles in hospitality for people who live in Newport has been incredibly rewarding.” stoneacrehospitality.com

At Newport’s Stoneacre Garden, Fun is Making a Comeback

Newport’s Stoneacre Brasserie is Bigger and Better Than Ever