Newport’s Stoneacre Brasserie is Bigger and Better Than Ever

It's successfully migrated to a larger space and a more ambitious menu, where every take on comfort food satisfies. 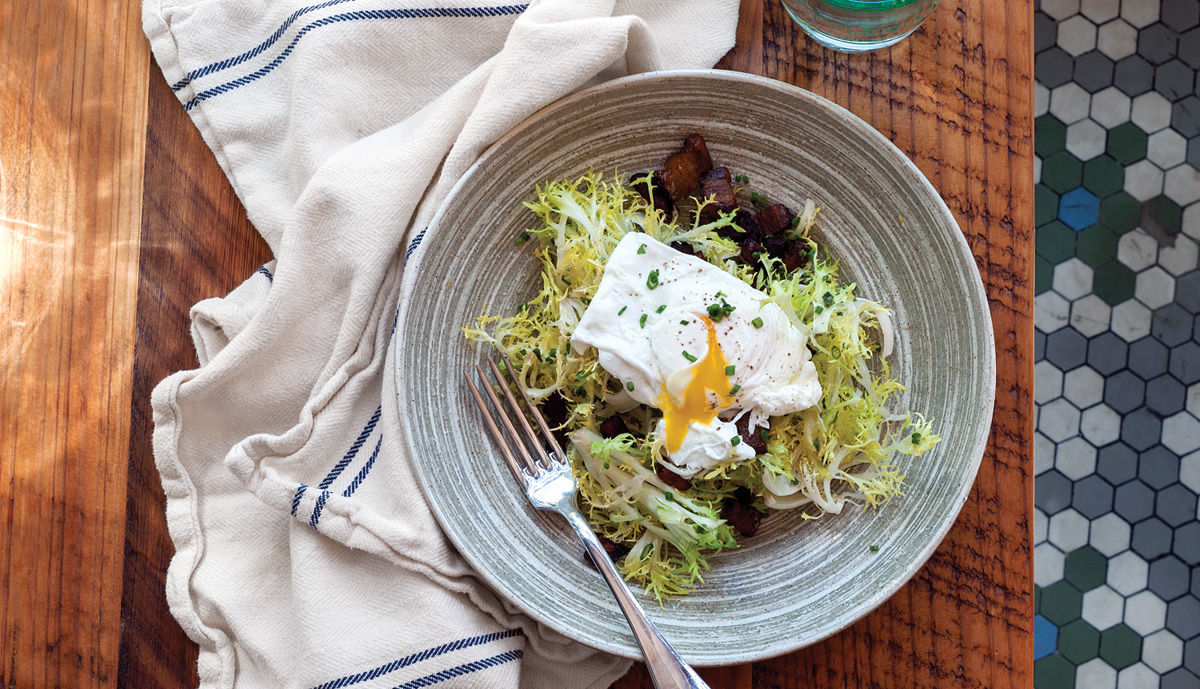 Stoneacre’s transformation has been a year in the making —the blink of an eye given how monumental the architectural undertaking has been. The chasm between a “pantry” on Thames and a “brasserie” on Washington Square is vast: more than three times the occupancy and an image that has matured from Main Street to Montmartre.

Owners Christopher Bender and David Crowell took on the unenviable but ultimately fruitful task of remodeling a 5,000-square-foot space into something hospitable. Their approach began conceptually: Can you construct a culinary world behind a single door? Can it run all day? If you build it, will they come? The answer, apparently, is yes.

Stoneacre handles three meals a day and dedicates a corner of the restaurant to heady cappuccinos and takeout items that run the gamut from chicken stock to prepared meals. Formerly a place for dinner, this version of Stoneacre greets you in the morning and will put you to bed at night. The bar is technically open from 8 a.m. until 12:30 a.m., which gives some idea of just how determined they are to cater to the masses. But the maneuvers of the management have to play second fiddle to aesthetics in a space this ambitious.

Eating a meal at Stoneacre lies somewhere between being at a bistro on the Seine and inside the interior design emporium of your dreams. This is engineering eye candy, every crevice offering a new articulation of French culture and American industrialism. Massive bridge supports over the bar rest above smoky vintage-style mirrors; bronze pendants hang alongside a massive art deco chandelier; antique factory tools are graced with bulb vases of orchids. It’s almost impossible to get the full scope of the place because meals play out in vignettes: tufted sofa-like banquettes host old friends; sprawling farm tables hold entire families; the spacious bar is filled with neighbors who offer spontaneous applause when a glass inadvertently topples to its demise. One night, a woman dropped to the floor to count push-ups while the rest of the crowd simply cheered her on and offered to buy her next drink. It’s tough to top a community that tight.

Of course, Bender and Crowell — who show up nightly to oversee the party — also have to figure out what food fits the mood in the city of Stoneacre. Across the board, dishes strive for intensity: smoked brisket with cider barbecue in the morning ($14), smoked trout deviled eggs ($9) in the afternoon and, in the evening, wood-fired shrimp with persimmon ($19), which pays unexpected homage to the soul of Southern cooking. It would have been easier to produce a menu that was straight up brasserie: some goat cheese, a coq au vin, creme brulee. But since the inception of Stoneacre (The Small) four years ago, the objective has been to create a bite that will stick with you, a goal still pursued at the old location that now serves tapas. And though the ceilings soar in this spot, dishes still ground diners in farmland and foraging. Heirloom carrot gnocchi ($24) feel as if they came out of Tolkien’s Shire, a fairytale of Thumbelina-sized gnocchi, blooms of maitake mushrooms and bits of hazelnut. It’s a meander through the woods, cognizant of every cranny and every leaf. 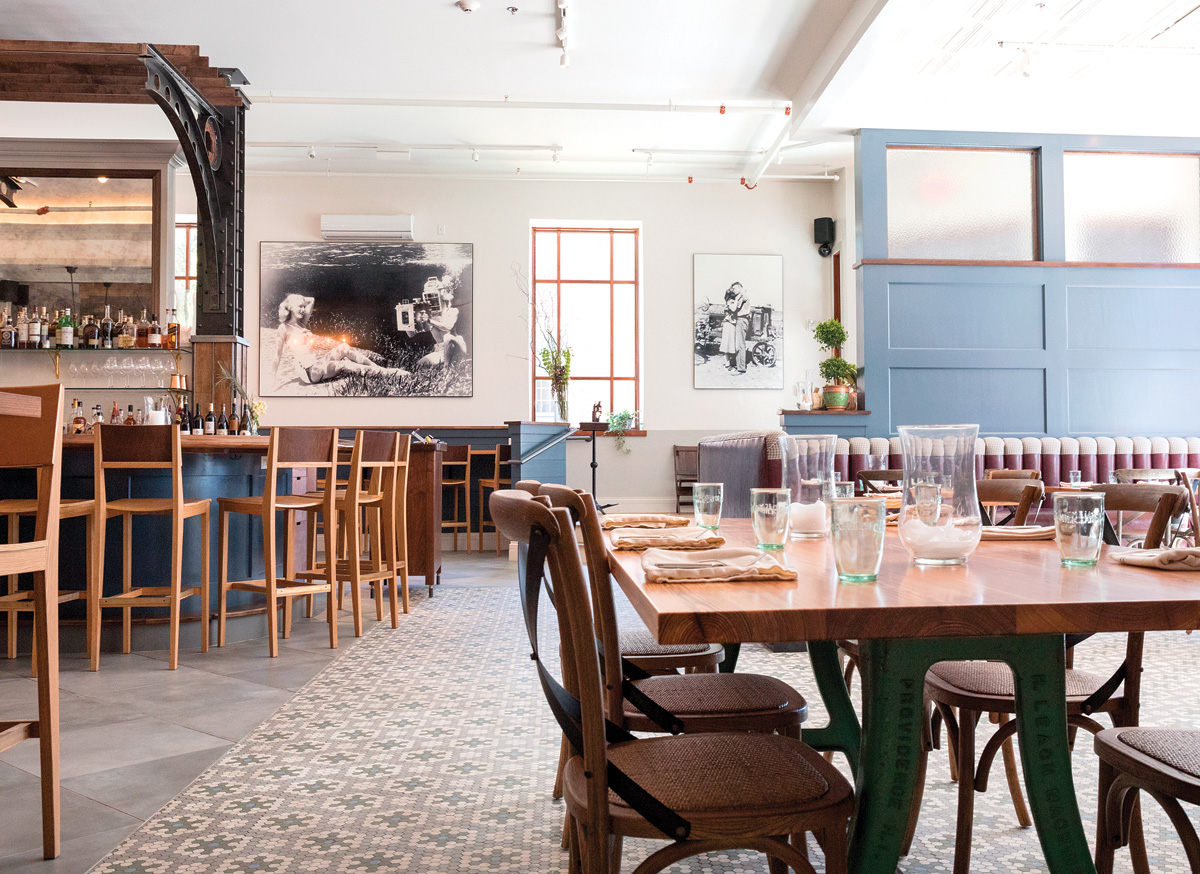 Appetizers often take this approach, including a seared yellowfin tuna with brown butter and crispy shallots ($18), a tangled morsel of texture and lushness that elicits earthiness where acid would have been expected. Even truffled mushrooms on toast ($16) are a web of stems and diminutive caps mixed with arugula and parmesan; a mishmash of crunchy richness.

It’s a challenge to sustain that level of attention in every dish and, often, the kitchen will opt for something more straightforward. Tagliatelle with meat sauce ($26) isn’t innovative but the winning pasta is housemade and toothsome. Steak frites ($26) may be status quo but the addition of caramelized shallots is a bonus, as is a side of sweet potato gratin with the roast chicken ($26). This is a place that pays careful attention to side dishes and (edible) garnishes in a way that pervades the entire restaurant. It’s not just the kitchen that’s open to the world but the dishwashing station as well. If that kind of transparency appears to be an oversight, it’s not. Everyone and everything counts in a place like this: the person who grows the herbs, the line cook who chops them, the washer who wipes it all away. Consider it a kinder, gentler approach in an age where oversight has become ritual.

The sentiment prevails long after the dinner crowd dissipates. Post 10:30 p.m., locals gather around the bar for conversation and a crack at the indulgent late night menu. French onion soup with a molten helmet of Gruyere ($9) is the most bistro-like offering, but most dishes stay American continental. Cheesy garlic bread with marinara ($6) demands a beer, pork chili verde ($9) happily takes a cider, and French fries smothered in braised beef, gravy and cheese ($12) just want to be the last thing anyone eats before calling it a night. If the midnight menu sounds like an elevated frat house buffet, it’s done its job in declaring every night party night. The brothers might be more low key than they were twenty years ago, but the camaraderie remains. 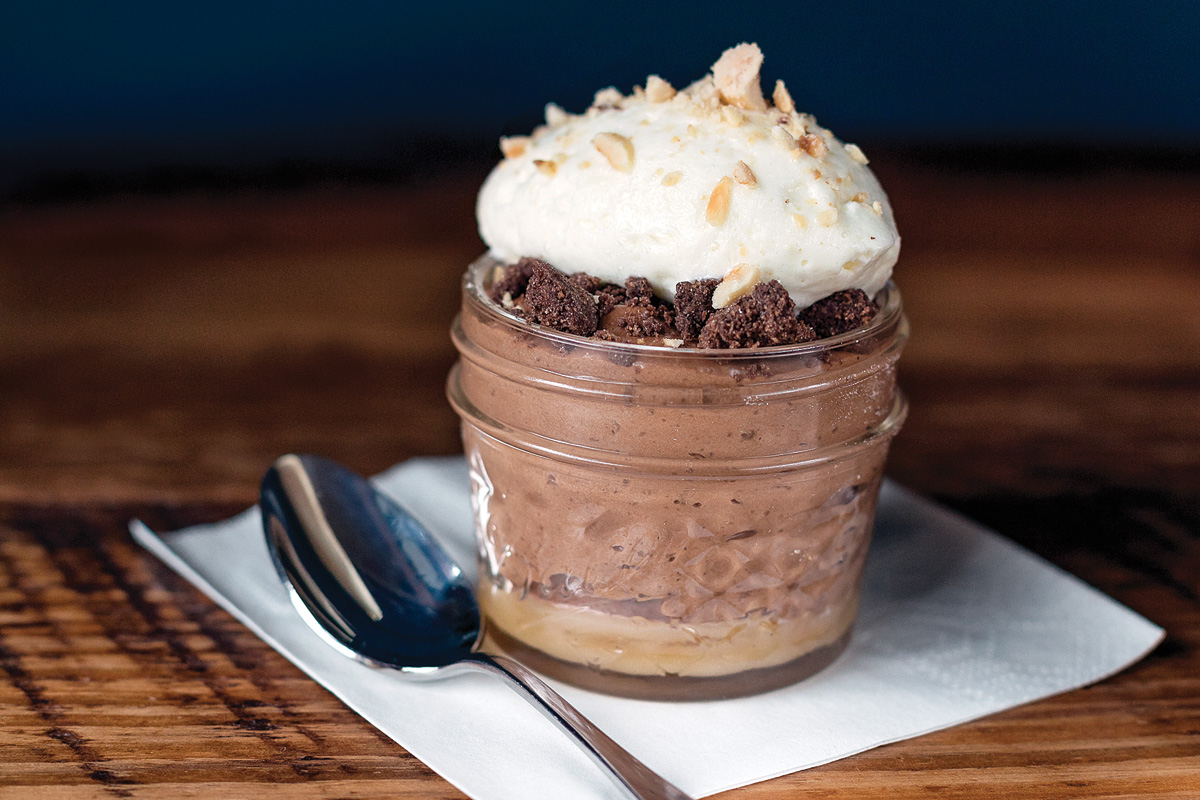 There are a few other traditions that prevail in the shift to Washington Square, notably the one dessert that made its way from the original menu on Thames Street: a small glass jar of hazelnut chocolate mousse with salted caramel and a dome of freshly whipped cream ($7). If anything hits both retro and European at the same time it’s this, the very manifestation of Stoneacre’s aspirations. Something decadent but comforting; something you’d order every day of the week. Finally, this dessert has the space it’s been waiting for.
✱✱✱
28 Washington Sq., Newport, 619-7810, stoneacrebrasserie.com.
Open seven days, 7 a.m. (cafe)–12:30 a.m. (bar). Wheelchair accessible. Street parking.
Cuisine Ex-pat living in France.
Capacity 150.
Vibe Carla Bruni Sarkozy meets Joanna Gaines.
Prices Appetizers $9–$19; entrees $19–$28; dessert $7–$9.
Karen’s picks Smoked brisket sandwich for breakfast; yellowfin tuna and carrot gnocchi for dinner; hazelnut chocolate mousse for dessert.