The following interviews were conducted during the early winter months before the coronavirus pandemic changed life as we know it for the unforseeable future. We’re printing the conversations as they took place so the past may be preserved through their voices.

By Jamie Coelho and Samantha Labrecque. Photography by Alex Gagne. 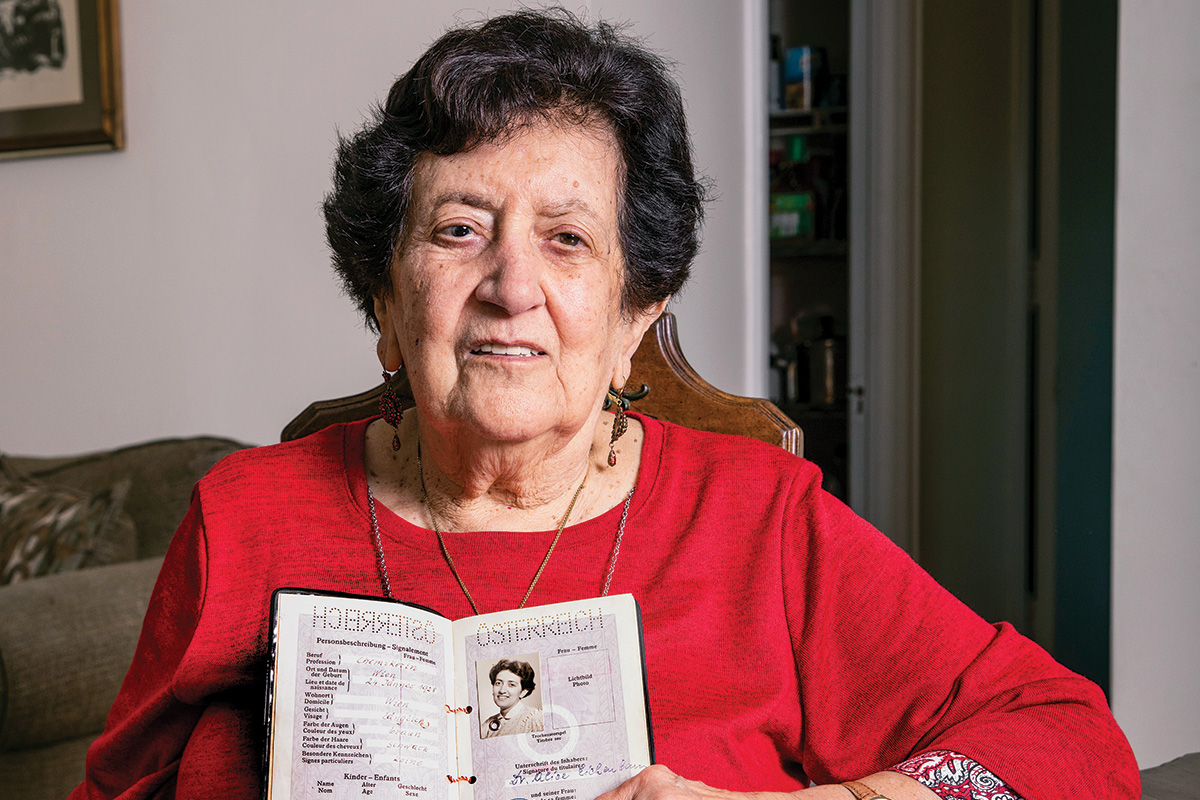 Alice Eichenbaum shows her Austrian passport in her home. Photography by Alex Gagne.

As told to Samantha Labrecque

I was born in Vienna, Austria, and was an only child. My parents were from a little town in Poland. They came to Vienna very young, so they were very Austrian — mostly my mother, with white gloves and a hat. She was very proper. My father had a business in Vienna and one in Sofia, Bulgaria. As a child I commuted back and forth between Vienna and Sofia.

I loved Bulgaria. Life was simple. I loved the simple life. Never in my life I felt I would leave. But let me tell you something. We only knew a little of what was going on in the West. Letters were coming in from family like, “don’t write us because we are going on a trip.” They all disappeared and were never heard from again.

The moment Hitler and the Germans marched in in 1941, things changed. We had passports with a big J for Jew with a swastika on top. Hitler gave an order that all foreign Jews had to leave. I would say that I really don’t know if us being German Jews is why we never got the order to leave. I had a very German name. My maiden name was Händel.

We had to report to the police. After 6 p.m., Jews couldn’t be on the street. We had food stamps, but we still managed. In November 1942, they issued to us the yellow star. We wore them on our jackets. It is known that Bulgaria had the smallest yellow star and the West had big stars. We couldn’t go to any restaurants, no hotels, no concerts, nothing. Even some streets we couldn’t go on. They had to do something with us, so they decided to disperse us into small communities built like ghettos, and from there, ship us off slowly.

We got the notice on a Thursday, I still remember, because Friday was my last day of school. On Tuesday, a few days later, they told us the police would pick us up and move us to a small town near the Turkish border. We only could take one suitcase. Twenty-five pounds. Our whole life into one suitcase. Anyway, they shipped us on a train. We didn’t know. It was a real train and I will never forget it. There were quite a lot of people wearing the yellow star.

They cleaned out a school and gave us straw mattresses to sleep on the floor. There were three families in one room. My grandmother and me, we slept in a little bed. There was no plumbing and no running water. Strict curfew. We only had from 10 a.m. to noon we could go out. Once a month we could go to the Turkish bath. It was a treat! But you get used to it. Food was bad and we were very restricted. We had coupons. Life was tough. No going out. No job, no money, no food. But I always say I was so lucky to be with my parents. As long as I was with them I felt nothing could happen. There were always new rules but life went on somehow.

It was hard to pick up the pieces after and go back to being ourselves. We went back to Sofia. Everything was bombed. But I finished high school. Then, I went to Vienna to stay with an uncle who survived Auschwitz to study in school [college] there. My parents left for Israel in 1952.

I became a chemist. I was an organic chemist all my life. I was supposed to join my parents after I graduated and I went to visit them a few times, but then I met my husband. My husband came from Poland. He was first in the Lodz ghetto from April 1940 to August 1944. He lost his entire family in Auschwitz. He was fourteen when he went into Auschwitz in September 1944. I always say how lucky I was compared to him. He was ten years old when he was in the ghetto and had to work in a tannery and make belts for the German soldiers. He worked at ten years old from eight to five with only one loaf of bread per week. If you were capable to work, you worked. If you were not, you went to the ovens.

It was in March, when I was already home and back to school, that the Americans were coming in. On April 20, 1945, the Americans liberated him. He weighed fifty-one pounds at fourteen years old. He was the only survivor of a big family. He went to a displaced person camp when he was fifteen. He was told he could go to Israel or America and he chose to go to America. When he came here, he went to New York to an orphanage then to Chicago to an orphanage, and from there, to foster parents in Providence. He went to Nathanael Greene and to Hope High School. Then he was enlisted in the Korean War.

When he got back he had no family again and no money. He got the GI bill. A friend of his who was in the army with him told him to go to Vienna to study because the American dollar is very strong there and with the GI bill he would get $110 a month. I was in the town of Graz, and so that’s where we met. And that was it! Instead of going to Israel to be with my parents, I came to America with him. And we had to come to Providence.

When we came over, Providence was doing really bad. The jewelry business was going under. Although for the two years we were here, I worked at Brown University as a research associate in the chemistry department. He was also a chemist. We moved to New Jersey because it was a big industry for chemists. We had good jobs. My two sons were born there. But he always wanted to come back to Providence. It was home for him.

So, we moved back to Providence and I had no regrets. No way. It was home. We owned a house on Savoy Street for forty-six years. Looking back, we always said we made the right decision to come home. At that time, years ago, we didn’t go out much to restaurants. We had dinners at the house. We invited people over and we dressed up in long dresses and the men came in ties. And we had people over to play the game of bridge. We went to the Philharmonic, although it wasn’t as good as now. In the summer we sometimes rented a place in Narragansett for a week. We loved the ocean.

Now, I have a yearly subscription to the Gamm and I go to the Philharmonic. I still cook a little bit, but not too much anymore. I still like to play bridge, too. For sixteen years, I was a docent at Roger Williams Park Zoo. I really love animals. And I still go to water aerobics twice a week. Sometimes, I also talk in schools to children. Unfortunately, my husband died young but he always felt very happy here. And me, too. I wouldn’t budge from Providence. We made it our life here.

For some survivors like my husband, they went through hell. Many were bitter after. But maybe, because he was younger, he was very optimistic and always with a smile even after everything. I never realized it. Life was not easy all the time. But I don’t look back. Maybe I am lucky. What was, was. It was bad times, but I don’t dwell. I don’t look back, I only look ahead. I just roll with the punches. I am really fortunate.