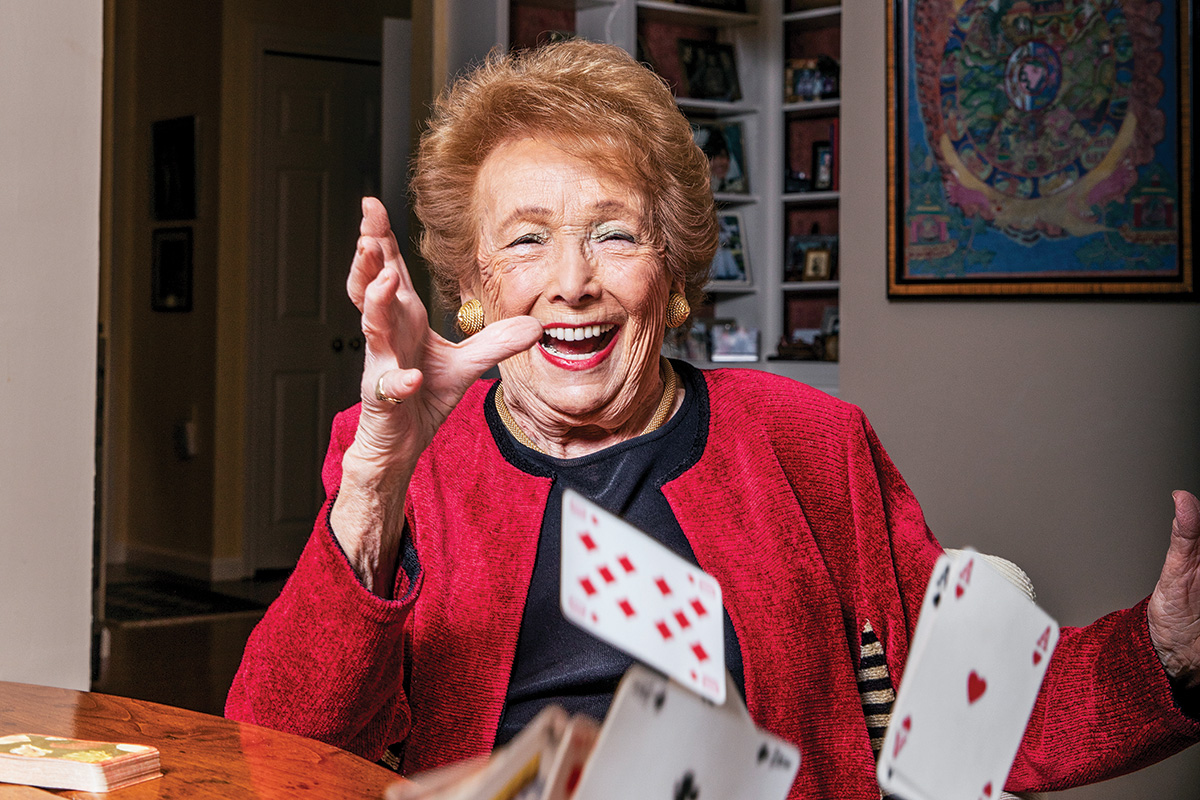 Winston is the oldest living volunteer at the Miriam Hospital in Providence, where she’s worked with patients since 1956. “I go once a week, and I work in the cancer facility where people are getting chemotherapy,” she says. “I serve people lunch, chat with them, give them warm blankets and a hot cup of tea.”

She lives at Laurelmead Cooperative in Providence in an apartment decorated with Asian and African art she’s collected from her travels all over the world and walls and shelves are filled with family photos. “I’ve traveled to a lot of places, and anytime I saw something I liked, I would bring it back,” she says. She speaks with the knowing advice of a great-grandmother who has lived and seen it all, and she gives great dating advice, too. She has three children, twelve grandchildren and seventeen great-grandchildren.

Winston grew up in Providence on the corner of Waterman and Wayland Avenue, directly across from what came to be Wayland Square. The house at 229 Waterman Street where she lived has been torn down and the location is now Mare Rooftop, which overlooks the city, as well as apartments.

“I’ll tell you about my house. It was built in 1886 by the Thurbers of Tilden-Thurber. The Gorham family [of Gorham Silver] had lived there and my father bought the house in 1922. It was a Victorian house, and it had eighteen rooms and six fireplaces, and it had a northern light,” the best light for artists, says Gloria. “My father graduated from the Art Students League of New York. He was an artist and that’s why he bought the house.”

Her father, Samuel Winston, started the greeting card company originally called the Japanese Wood Novelty Company on Summer Street in Providence in 1906. It was later named Paramount Greeting Card company and moved to a mill building in Pawtucket, which was recently destroyed by fire. Her father died at age fifty when Gloria was only five years old.

She and her two sisters, Dorothy Nelson and Bernice Gourse, all went to public schools, including John Howland, Nathan Bishop and Hope High School. Gloria’s mother, Ruth, instilled volunteerism in the sisters who were thirteen and eight years apart. They all graduated from Pembroke College — the women’s college in Brown University — where Winston majored in sociology and minored in psychology.

“During that time, I met a handsome midshipman from the Naval Academy, whom I later married,” Winston says. “When I met [Jimmy Winston], I was just a junior in college and my mother always said to her girls, ‘The single most important thing I can give you is an education.’ Mother said I needed to graduate before I married Jimmy, because ‘no one can take your education away.’ ”

They wed on December 5, 1948, and raised three children on the East Side. Gloria and her sisters worked at Paramount, where her sisters were both editors and she worked part-time while taking care of the children. At Paramount, Winston organized a first-of-its-kind program that allowed employees to volunteer during working hours to deliver Meals on Wheels.

Growing up in Providence, she was involved in many things. She and her sisters helped out at Temple Beth-El with their mother. “I organized Girl Scouts and Cub Scouts and made my husband a cubmaster,” she says.

During the ’70s, Winston worked for the Council of Jewish Women through the Hebrew International Aid Society. “We would meet new Americans entering the country from Russia, Egypt and Cuba by plane, the train or bus, and we would find them a place to live, and furnish the whole house,” she says. “We would help find them jobs and get them clothes.

“I always worked for organizations I cared about. My Temple Beth-El, the RISD Museum [as an associate and board member], at the Miriam Hospital, Butler Hospital [now celebrating its 175th anniversary], my favorite Camp Jori and Meals on Wheels,” she says.

Her husband died in 1999, and in 2008 she moved to Laurelmead, where she participates in exercise classes like yoga and aerobics, enjoys sing-alongs with friends and plays duplicate bridge twice a week.

“I love my life at Laurelmead,” she says. “It’s like a spa, summer camp and college because there are lectures, concerts and entertainment and wonderful people from all walks of life.”

She also goes to the theater, including the Gamm and Trinity Rep, Rhode Island Philharmonic concerts and visits the RISD Museum.

Next to her family, her greatest joy is volunteering for the community. “If everyone volunteered for something, even just one day a week, how much more beautiful everyone’s life would be. And your own life, because if you touch another life, you can make a difference.”