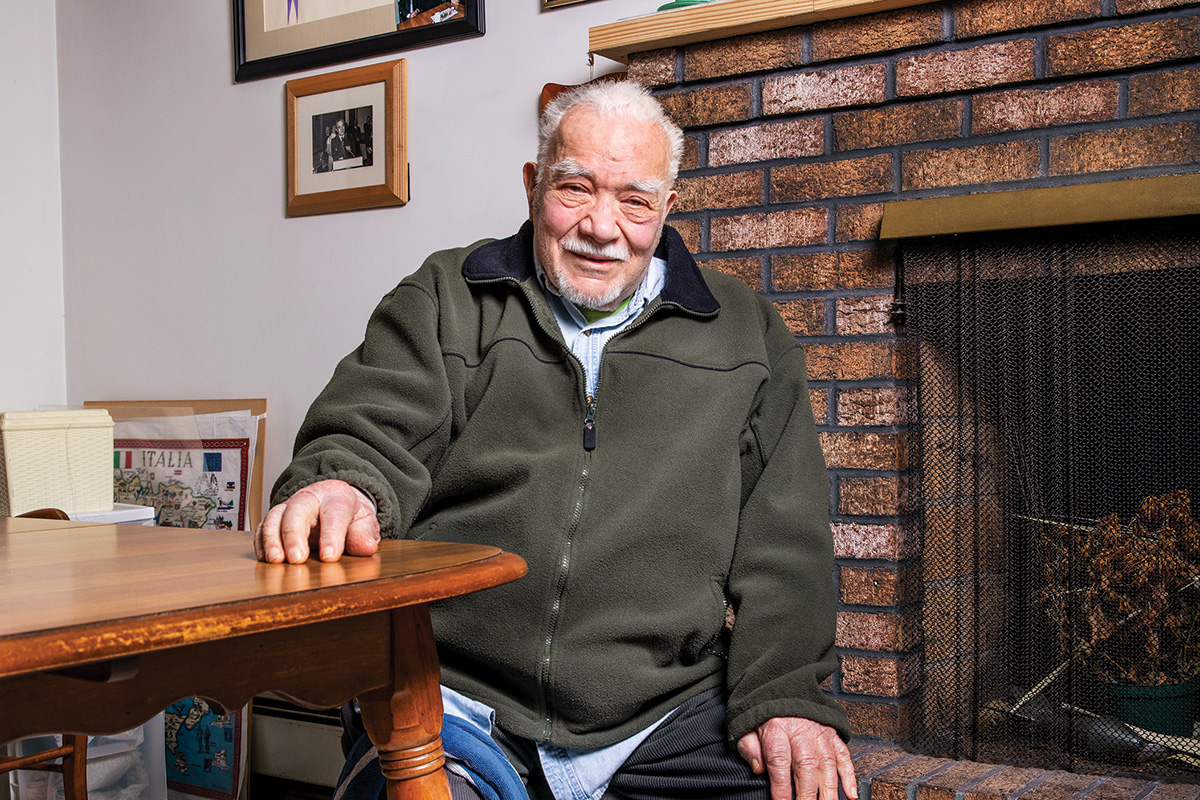 As told to Samantha Labrecque

I arrived in Providence by ship from Pontecorvo, Italy, the night before Christmas Eve, in 1939. I was thirteen years old. I loved Italy, of course. I moved to Rhode Island with my mother and three siblings to be with my father, Angelo Francesco Caramadre. He was successful in convincing the authorities that he could support his family here.

He was a precious stone setter. When we came to this country, my father came right up to the ship to pick us up and he took us out for supper. They asked me if I was hungry, so on the way to our new home we stopped at a restaurant and they gave me a big plate of spaghetti. I ate the whole thing.

I used to walk from Dora Street to Laurel Avenue and to Laurel Hill Elementary School, then to Oliver Hazard Perry School, more than a mile away. Times were simpler. The roads are too complicated now, so we take the back roads home through Olneyville.

Then, when I was eighteen, I was drafted into the army out of Mount Pleasant High School. They sent me to Florida for basic training and after three or fourth months they shipped me up north again to Fort Devens then on a ship convoy to France. As we were marching in, somebody said, “The war is over!” There was no danger. Nobody was going to shoot me, and I didn’t have to shoot anybody. It was great.

So, I was stationed in Nuremberg where the war trials were being held. Whenever I could go, I went to see the trials myself. I was also a sentry where the trials were held. Someone told me if I asked for compassionate leave, I could go see my relatives in Italy. So, they gave me fifteen days plus travel time. I thought, ‘I have to make the travel time work for me.’ I went all over the place.

I saw this girl in Italy once when I was young, but never talked to her. She and her sister went to a school close to where I was going to school. Her family eventually immigrated to Canada after World War II. Her mother wrote a letter to my father with only three words, ‘Antonio Caramadre, Providence.’ She dropped it in the mail in Montreal and it made it all the way over here to Providence. She wanted to know if my father and mother knew of their relatives who were living in Cranston. They did know them. So, her family came down over here and that was the first time that I talked to Teresa. Happy times. We courted long distance. Then we got married in Montreal and she moved here.

When I was younger I used to dance at the Rhodes on the Pawtuxet. People told me I was a very good dancer. For a long time, I was a door-to-door salesman. I remember Benjamin Fairless, who was the president of US Steel, was the main speaker at the Bryant University graduation. I went to school and got a degree in business administration in only two years. He said, “Everybody’s got a job, but a lot of you don’t have one. Get a job doing anything, even going door to door. Make a living any way you can.” So, I started to do it myself. To my surprise, I did well.

A few years later, I got a wholesale job selling Rawleigh Products. I didn’t get rich on it, but I pulled a living off of it. Years later, my friend, Bill Favicchio, who I knew from high school, was appointed banking commissioner. Fifteen days later, he called me and said “Frank. I want you to come here because I need loyalty.” I told him I already had a job, but I went and applied to the Department of Business Regulation and I got a job as a bank examiner for the state. After a few years, I took an exam to become the chief bank examiner. Everyone who took the test failed it except me. One of my friends said, “Well they gotta give you the job. You’re the only one who passed.” And I said, “You never know how politics work.”

They appointed somebody else. When I saw this, I went to my representative, Joe Bevilacqua. They ended up creating a new job, chief credit union examiner, just for me. Because the credit unions were coming up at the time, they were very jubilant to have a leader represent them. They gave me a testimonial dinner on the nineteenth floor of the Biltmore Hotel. It was a great time and my kids enjoyed going up and down, up and down on the elevators.