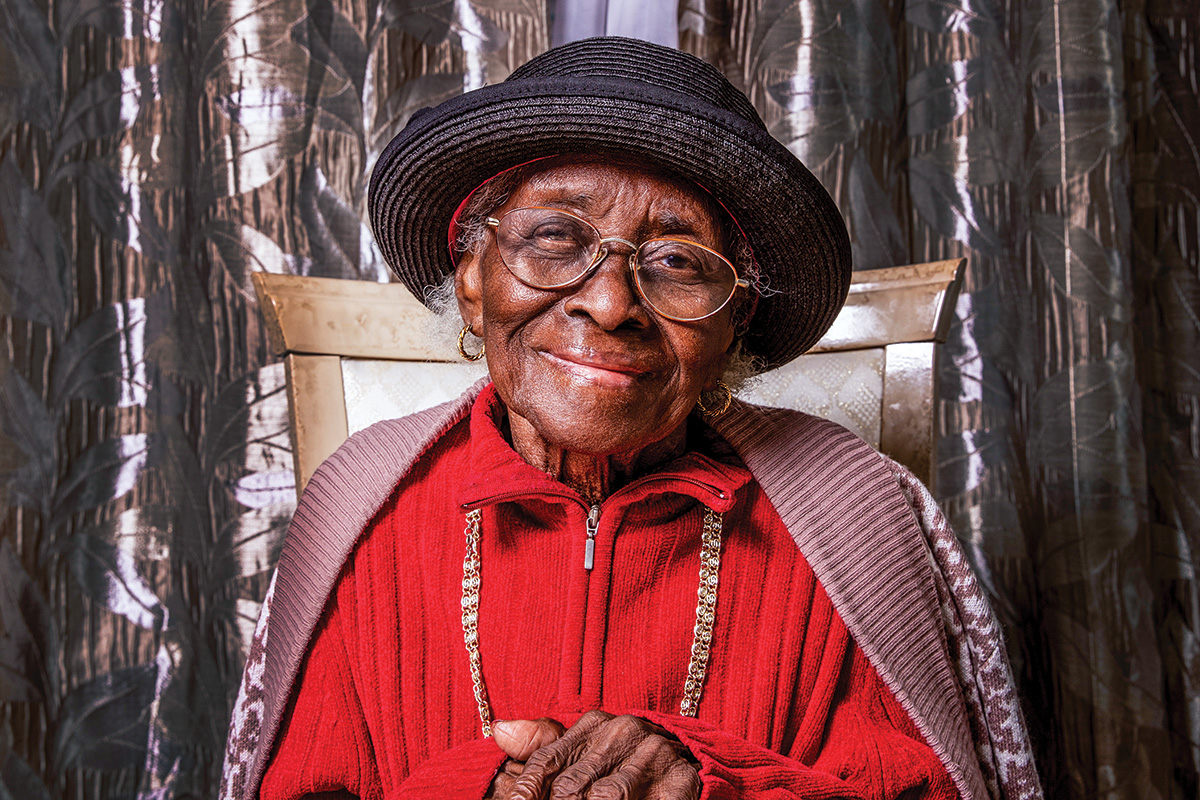 Matilda Richardson sits at the dining room table of her home in South Providence. She’s wearing a black straw hat that she normally wears to church, a red sweater, an intricate necklace and red nail polish she applied herself that day, but she’s upset she can’t find her long dangling earrings.

Her granddaughter, Beatrice Richardson, a nurse for the Rhode Island Department of Health, and her daughter, Lydia, sit nearby. They take care of Matilda, along with other family members who switch off duties. “She wears belts with everything whether it matches or not,” says Beatrice. “She loves jewelry, red lipstick and red nail polish is her thing.”

“When I came here from Liberia, I was in my mid-seventies. I have been here twenty years. I have eleven children, and they are all still alive. I have thirty grandchildren and I don’t know how many great-grandchildren,” says Matilda. “I only have one child in Liberia, the youngest, and the rest of my children are in the United States.”

Her children came here for college at Johnson and Wales University, Indiana State University and University of Rhode Island, among others, Beatrice explains, but the youngest child stayed behind to take care of Matilda’s husband, who was ill.

“Before moving here, I used to come and visit. I was a schoolteacher in Liberia. I used to come on my vacations and go back. But then the war started and I realized I can’t go back. I am trying to get my daughter in Liberia to come, so I can see her before I’m gone,” Matilda says.

“In Liberia, I taught fifth grade and different subjects, including science. I taught until right before the war, so 1990, then I retired. The children didn’t want me to leave them,” she says.

Beatrice describes life in Liberia with her grandparents until she came here in 2001. “We lived in Virginia, a suburb in Liberia where my grandmother opened a little feeding center for people. The United Nations would provide food and feed orphans and people who didn’t have anything. She also took care of foster kids in Liberia. They adopted kids from the neighborhood. If someone had a child that they couldn’t take care of, she would just take them over.”

Her current church, through the ministry Isaiah 58, helps the less fortunate by preparing meals. “My grandmom, even at this age, would sit there and register everybody that came in. It was her role,” says Beatrice. “Nobody could take that job from her; she took it very seriously.”

Matilda only stopped going to the senior center last summer. “It’s harder to get around, but I used to go every day. At the end of last year, I started with arthritis,” Matilda says. Her granddaughter says she doesn’t take any medication; just Tylenol for pain. “We grew up eating all naturally grown food,” Beatrice says. “We had farms and gardens, and never put chemicals or fertilizer on anything. It just grew.”

Matilda keeps very active at home. “I do puzzles. I read my Bible every day. My Bible, I must read it before I go to bed, and when I get up in the morning, I must read it again. My favorite passage is Psalm 27: ‘The Lord is my light and my salvation. Whom shall I fear? The Lord is the strength of my life. Who should I be afraid of?’ ”

She enjoys large family celebrations and she loves to dance. Her birthday is on Christmas Eve. “I like music. I like to dance,” she says, requesting to hear and dance to Chubby Checker’s “The Twist.” “I always like to watch the ‘Ellen’ show. I like to see her dance. ‘The Price is Right,’ that’s what I like.’

Matilda’s son, Sam Richardson, leads the World Harvest Worship Center ministry on Broad Street, where they carry her inside the church. She goes every Sunday, and starts calling family at six o’clock in the morning to come pick her up. “I wear a dress to church, but sometimes I make a mistake and show up in pants,” Matilda says. “I am not supposed to wear pants to church.” Church doesn’t begin until eleven, but she starts getting dressed first thing in the morning. “It’s not time to go,” says Beatrice with a laugh, “but she’s already ready.”