More than 1,000 season ticket deposits were sold in the first hour of sales for the new professional men’s soccer team's USL Championship debut in 2024. 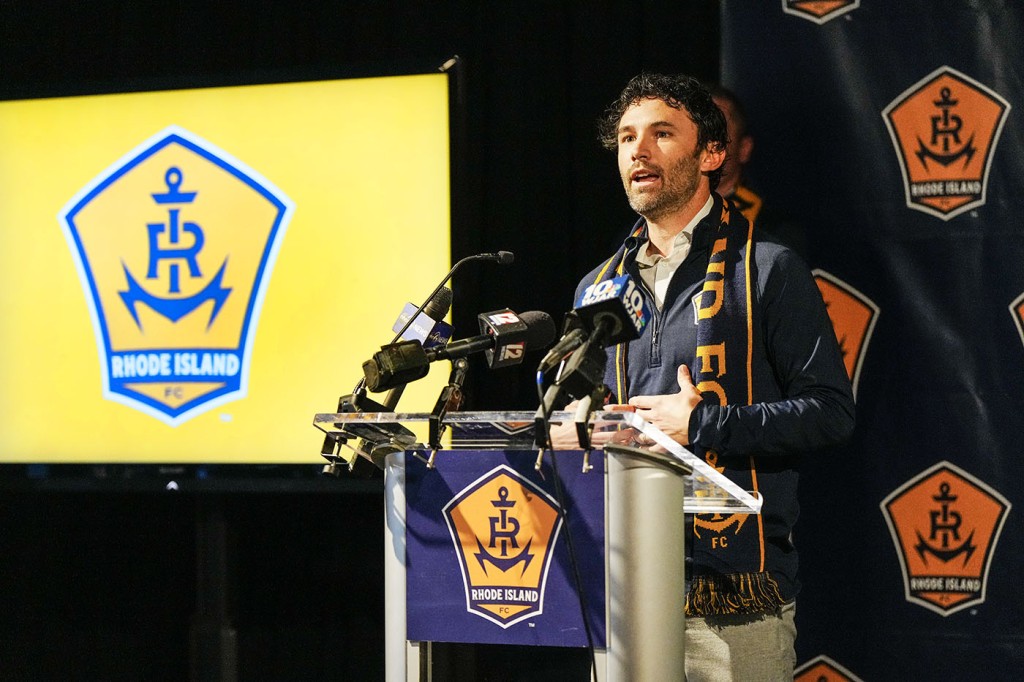 The Rhode Island Football Club holds a press conference to unveil their name and crest at the Blackstone Valley Visitors Center. Photo by Glenn Osmundson

It’s been quite an exciting year for local soccer fans, to say the least. Not only did Gillette Stadium score hosting duties for a number of 2026 FIFA World Cup Matches, but now the Ocean State has secured its very own professional men’s soccer team, aptly named Rhode Island FC (that’s football club, for the uninitiated). On Monday, November 14, the club unveiled its team colors – a deep navy and golden yellow combo — as well as an iconic crest that draws inspiration from symbols that are unique to Rhode Island. The club identity and crest were developed with input from hundreds of Rhode Islanders representing nearly every city and town in the state as well as a diverse array of cultures and experiences over several months. The input included eight community listening sessions and two in-depth surveys conducted in English, Spanish and Portuguese. NAIL Communications, the award-winning Rhode Island-based design agency, designed the identity and crest. 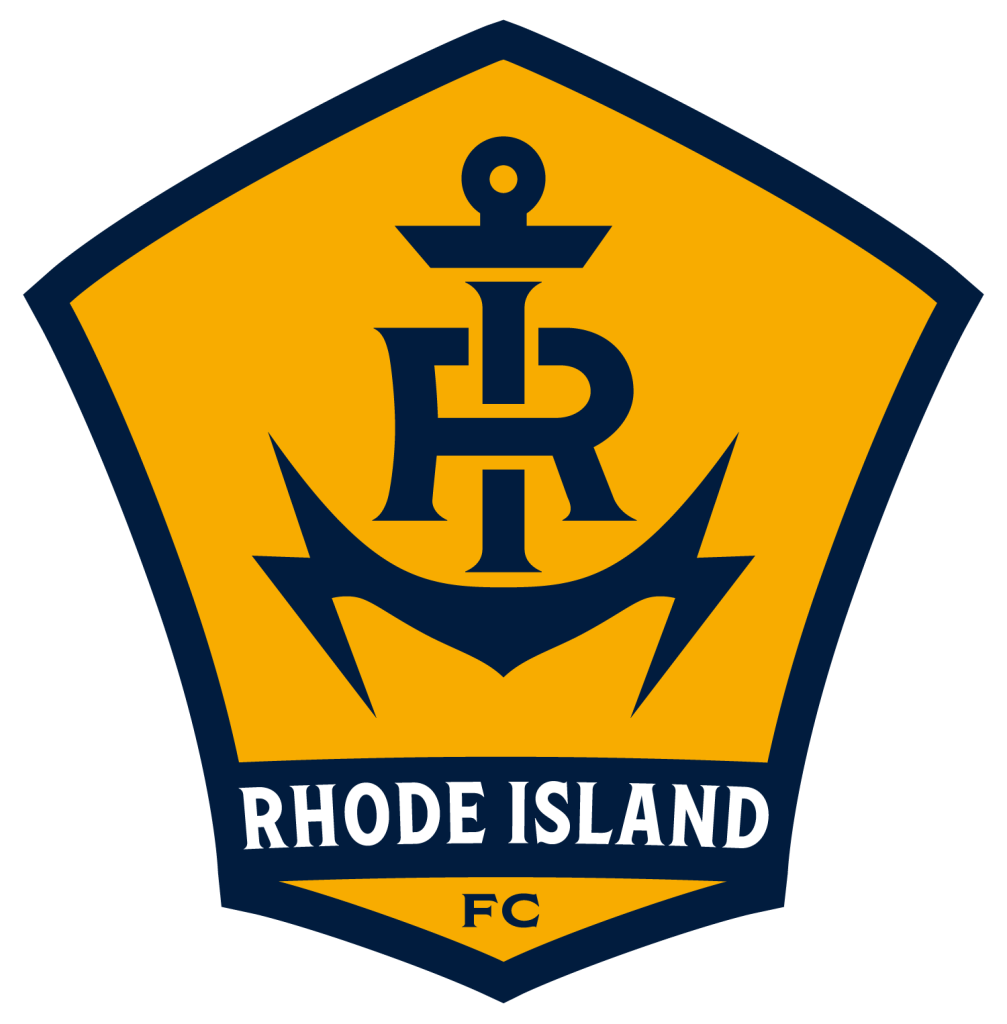 “In soccer, players and supporters wear the club crest over their hearts. Our team is a club for every Rhode Islander and we cannot wait to open our doors to welcome long-time soccer fans and folks new to the beautiful game into our home,” says Cranston native, Rhode Island soccer legend and Rhode Island FC co-founder Michael Parkhurst. “We spent months talking with other Rhode Islanders to develop a club identity and crest unique to the people and place it represents. Those conversations sparked more than a design: they helped solidify connections with our community and opportunities to give back. When our club steps out on the pitch, every fan will see that we are firmly anchored in Rhode Island.”

Rhode Island FC will make its United Soccer League [USL] Championship debut in 2024, hosting its matches in a waterfront, state-of-the-art stadium currently under construction in Pawtucket—another win for the local sports world following the PawSox’s departure from the city in 2021.

In a stunning display of enthusiasm and support, the Rhode FC sold more than 1,000 season ticket deposits in the first hour when sales went live at 10 a.m. on Tuesday, November 15. For those still interested in securing their own season tickets — which include benefits like exclusive events, merchandise and a seat for the club’s historic 2024 Inaugural Opening Night — deposits are priced at $24 per seat and can be purchased at rhodeislandfc.com.

“Rhode Island is one of the country’s best markets for soccer and this state deserves a team it can call its own. Rhode Island FC is the only pro team in the state with a direct connection to the thirty-nine cities and towns that make up the Ocean State,” says Brett Johnson, Rhode Island FC’s co-founder. “With an identity and a strong base of support from both established and new soccer fans, we know that Rhode Island FC will compete at the highest levels of USL immediately. As importantly, this club will provide an anchor for civic pride in our stadium in Pawtucket, that will ripple across the entire state. Our stadium will be a community gathering place and our players will be neighbors and ambassadors to Rhode Islanders. We can’t wait for Opening Night.”

The new club also honors the state’s rich soccer history, which extends as far back as the 1800s. Pawtucket, in fact, played a large role in the development of the sport in New England — some of the best European talent at the time played alongside Americans and new immigrants to the area. Within walking distance of the stadium Rhode Island FC will soon call home, championship teams like J & P Coats FC, Pawtucket Rangers and the American Cup-winning Pawtucket Free Wanderers competed in front of thousands of spectators. Little Rhody was also home to the first professional African American soccer players in the United States, with legends Oliver and Fred Watson played for teams in the Pawtucket area in the late nineteenth century into the early twentieth century. 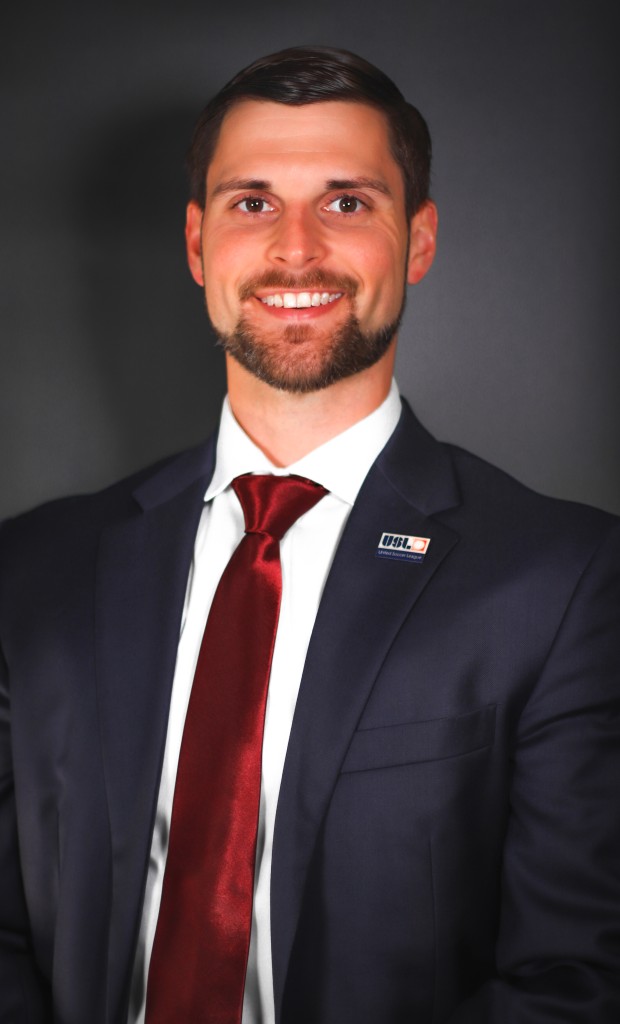 Helping to continue that legacy is Brett Luy, who was announced as the club’s president just two days after the club’s grand unveiling. Luy is hailed as one of the most experienced soccer executives in the country, having previously served as executive vice president of league of operations for USL. He also worked on multiple first-of-their-kind initiatives in the American soccer landscape, including the first-ever competitive match to use “video assistant referee” during the 2016 season. Luy additionally served as one of the lead negotiators on behalf of the USL Championship and USL League One clubs as they ratified their first-ever collective bargaining agreements with the USL Players Association, and he served as a member of US Soccer’s Head Injury and COVID Task Forces and was a member of US Soccer’s US Open Cup Committee.

“I am thrilled to be joining the incredible soccer community in Rhode Island,” says Luy. “The opportunity to build a club and compete immediately for championships is a dream come true. I’m looking forward to getting to work and capitalizing on the local market’s enthusiasm for soccer. In the months to come, we will hire a coach, begin building our team, and put all the pieces in place to provide fans with a first-rate experience cheering on a team for all Rhode Island.”

To keep up with the latest developments and learn even more about Rhode Island FC, visit rhodeislandfc.com.