Read an Excerpt from G.Wayne Miller’s Kid Number One

The book highlights former Hasbro Chairman and CEO Alan Hassenfeld and his rise and fall within his family’s renowned American toy company.

G.Wayne Miller with Alan Hassenfeld, the subject of his book, Kid Number One.

Kid Number One is G.Wayne Miller’s latest book, highlighting former Hasbro Chairman and CEO Alan Hassenfeld and his rise and fall within his family’s renowned American toy company based in Pawtucket, Rhode Island. Miller, a Providence Journal staff writer, podcaster and co-host and co-producer of the PBS TV and SiriusXM Satellite Radio show “Story in the Public Square,” writes the story about how Hassenfeld ran the company with heart after his brother’s untimely death, even though that was not initially part of his life’s goals. The book chronicles the history of popular American toys like Mr. Potato Head and G.I. Joe, and it also details disastrous decisions Hassenfeld made involving Pokémon that almost killed the company. After retiring, Hassenfeld has gone on to dedicate his life and his family fortune to philanthropy, including helping to build two children’s hospitals, establish numerous educational and health programs, train young doctors and scientists, resettle refugees and more. 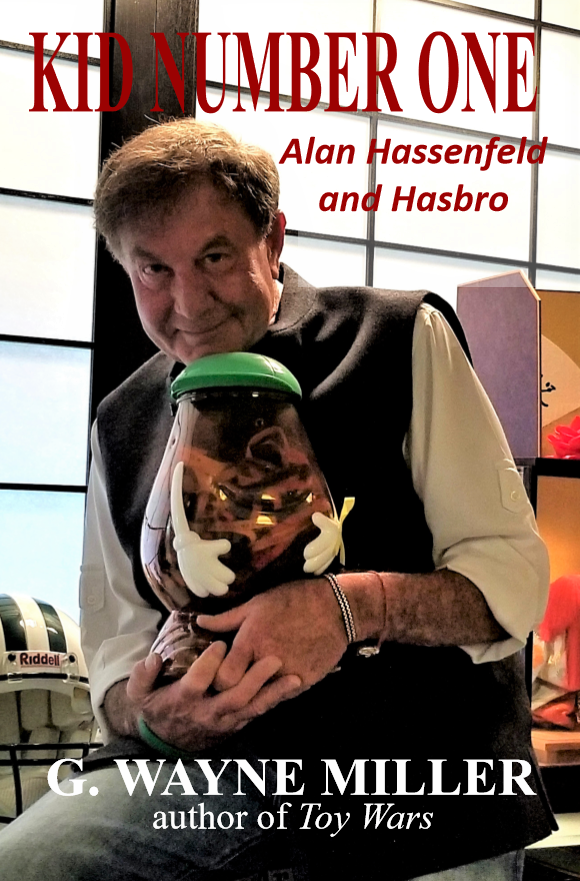 Read an excerpt from Kid Number One below:

One summer afternoon, I joined Alan G. Hassenfeld for lunch at a seaside restaurant near his residence in Bristol, Rhode Island, his home state.

His wife, Vivien Maria Hassenfeld, joined us, together with two faculty members and five students from Brown University’s Hassenfeld Child Health Innovation Institute, which had opened with a $12.5-million gift from Alan and his family. Utilizing research, education, and healthcare intervention, the Institute seeks solutions to childhood autism, asthma, obesity, and other pervasive problems. Alan had invited the Brown folks to lunch so he could learn about the early progress. The students, the first group of the institute’s Child Heath Scholars, wanted to meet the man behind their mission.

Hassenfeld, former chairman and CEO of toy and entertainment giant Hasbro Inc., which reported record revenues of $5.21 billion in 2017 and $4.58 billion in 2018 after the collapse of toy retailer Toys ‘R” Us, listened to the young women and men, asking questions and sprinkling the conversation with humor. The students may have expected a benefactor demanding a strict accounting of how his money was being spent, as some donors would have, but instead they found an amiable man with a mischievous laugh and a degree of humility that belied his stature. His youthful energy matched theirs. With his tousled hair, penny loafers, collarless shirt, and colorful wristbands, he looked like an unconventional sort of business executive.

He was, and he knew it. He enjoyed being Kid Number One, as he sometimes called himself—Pinocchio, he even said when feeling particularly impish. And he delighted in likening himself to Mr. Potato Head—“Pot Head,” he affectionately called it—the whimsical toy that against odds became a national sensation the year it was introduced, 1952, when Hassenfeld was four and his only brother, Stephen, 10, was already dreaming of running Hasbro. On weekends and holidays, Stephen insisted on visiting the factories with the boys’ father, Merrill, who was running the toy company in the post-war years. The younger brother only wanted to have fun.

An hour or so into the lunch, Hassenfeld invited questions of himself.

“I want to hear a little bit more about your vision,” one student said.

“I don’t know if I can give you a real answer, but I won’t give you a Trump answer, either,” Hassenfeld joked.

The students laughed. They seemed no more enamored of the former reality-show host than was Hassenfeld, for whom the mere mention of the 45th president could prompt a denunciation of Donald Trump’s demagogic intolerance.

“The success of my family has always been through working in the toy industry and the entertainment industry, with children and families,” he said. “I believe that if you’re going to give back, your philanthropy should be related to things that are close to your heart.”

Children, in other words.

Hassenfeld mentioned Rhode Island’s Hasbro Children’s Hospital, built with company and personal money during the 1990s while he headed Hasbro, and the newer Hassenfeld Children’s Hospital of New York at NYU, founded with a $50-million family gift led by Alan’s mother, the late Sylvia Grace Kay Hassenfeld. Alan could have gone on, although he did not, braggadocio not being among his traits. Kept internally, the unpublicized complete list of the diverse people and causes benefitting from Hassenfeld initiatives filled nine single-spaced pages. The Hasbro corporate philanthropy list also was lengthy, one of the reasons Corporate Responsibility Magazine rated the company number one on its 100 Best Corporate Citizens 2017 list, number five for 2018, and number 13 in 2019.

Hassenfeld discussed some of the new Brown institute’s specialties: among other health issues, the rise in incidences of autism and asthma troubled him. Budget issues in “a school, a region, or a town” resulting in cutting child-nutrition programs did, too. And there were other matters that also bothered him that he did not mention but which he addressed philanthropically and with political activism.

The students were curious about Hassenfeld’s motivation.

“All of these things I do because I have a debt to repay,” he told them.

The promise to repay it, as they probably did not know, had been written in blood more than a century before, in a place far away.

At one point as we dined overlooking beautiful Narragansett Bay, where whitecaps danced beneath the August breeze, my thoughts drifted away from the students and their mentors, institute head Dr. Patrick M. Vivier and fellow scientist Annie Gjelsvik.

If you travelled north on the bay, you would reach the city of Providence, founded in 1636 by Roger Williams after Massachusetts Puritans expelled him for his beliefs in religious freedom and separation of church and state, which the Founders would make bedrock principles of the American republic and which would make Rhode Island an attractive new home for other refugees. Continuing up the Seekonk River to the Blackstone River and into the city of Pawtucket, you would pass Slater Mill, a museum now but the birthplace of the American Industrial Revolution in the late 1700s when Samuel Slater, a British immigrant, opened a water-powered, cotton-spinning factory in partnership with Moses Brown, a wealthy industrialist and co-founder of the university where the Hassenfeld Child Health Innovation Institute is based.

Further up the Blackstone River, you would find old buildings in the city of Central Falls where G.I. Joe toys once were manufactured – the factories that enchanted the young Stephen Hassenfeld in 1952. A ten-minute drive from there would bring you to 1027 Newport Avenue in Pawtucket, global headquarters today of Hasbro Inc., the company that made those toys – and still does, in China, India, Mexico, Turkey, Ireland, and Massachusetts, though no longer in Rhode Island. Times have changed since “America’s Movable Fighting Man” first hit the market, and today the line contributes but a fraction of the Fortune 513 company’s annual revenues. Such other home-grown brands as Monopoly, Nerf, and Transformers, integrated into a blockbuster movie franchise—and licensed products including Star Wars, Disney, and Marvel now power Hasbro, second largest toy company on the planet, after Lego. Mattel, once the industry leader, had fallen on hard times that were getting harder.

The company’s founders, brothers Hillel and Henry Hassenfeld, who immigrated to America in the summer of 1903, when they were penniless teenagers who spoke no English, could not have imagined such success. They left their native Poland to escape death at the hands of anti-Semites who slaughtered Jewish children and adults, not to build a global giant.

When they founded Hassenfeld Brothers, a Rhode Island textiles-remnants firm in 1917, Hasbro seemed destined for a modest place in global business history.

But the first Hassenfeld brothers expanded beyond textile remnants to pencil boxes, which they began to fill with writing instruments and rulers. On the eve of the Second World War, they used their boxes for play medical equipment, marketing them as junior doctor and nurse kits. The war brought Junior Air Raid Warden Kits. But until Mr. Potato Head, introduced in 1952, Hasbro still showed little indication of the corporation it would become. The toy and games industry then was ruled by heavyweights Marx, Ideal, Lionel, and Milton Bradley.

Pot Head, the first toy advertised on network TV and Hasbro’s first monster hit, began a decade of unprecedented success for the company, which broadened its offerings and forged partnerships with Hollywood. Those ties would reap still greater rewards in decades to come. Transformers and Star Wars as well as Disney’s Frozen and Princess today, for example.

And then came the fiasco of Flubber, which sold wildly when introduced in 1962 and crashed and burned the next year in a national scandal (the putty-like compound caused skin rashes, prompting lawsuits, scathing headlines, and a Food and Drug Administration investigation, a devastating development in those Camelot days). Merrill, who ran the Hasbro toy division while his only brother, Harold, ran the pencil-manufacturing side of the family firm, pulled Flubber from the market—and prayed for some new toy-business magic, which seemed the only way to survive the company’s $5 million loss in 1963.

Merrill’s prayers were answered with G.I. Joe, arguably the iconic boys’ toy of all time.

Just as the character would in the heroic storylines surrounding his introduction the next year, G.I. Joe became an unprecedented best-seller. From record loss, Hasbro earned a record profit of almost $6 million just two years later, a stunning turnaround in an industry beholden to the whims of kids and the pocketbooks of parents.

The company would continue to grow, albeit erratically with a succession of hits and misses characteristic of the toy and entertainment business—and another near-fatal blow in the late 1970s as the Vietnam War and the skyrocketing price of plastic forced G.I. Joe into the bunkers. Enter Stephen, who steered Hasbro to Fortune 500 glory in the 1980s by building internally and acquiring Milton Bradley Company with its Playskool brand and timeless classic games, including Candyland, Chutes and Ladders, and The Game of Life, first sold the year before the Civil War began. Amazingly, and that really was the word, a toy company had become a Wall Street darling, sharing the same rarefied air as car manufacturers, petroleum producers, and venerable General Electric.

When Stephen died in 1989 at age 47 of AIDS, a disease he had kept secret from Wall Street and almost everyone else, even his mother, Alan succeeded him.

Some thought Kid Number One was ill-suited to run Hasbro.

Some thought he would kill it, and he almost did, though not for many years.

Toy Wars was published in 1998, when Alan Hassenfeld was still Hasbro chairman, president, and CEO, acing his corporate game. Much happened before the period documented in that book – events that have been barely mentioned publicly or completely untold, until now. Much has happened since that also has gone largely unchronicled, including disastrous decisions Hassenfeld made involving Pokémon that almost killed the company.

Thus, Kid Number One is really both prequel and sequel, a new contribution to the literature of an industry unlike any other, and the real people and fictional characters—a century-and-a-half’s worth of toy, game and screen icons—that created and maintain it. Having become an elder statesman of that world, Hassenfeld is uncommonly qualified to serve as tour guide.

So this book is many interwoven stories—some entertaining, some educational, some historical, some inspirational to those who share Hassenfeld’s belief in Tikkun Olam.

The first opens on that bloody Easter Sunday in 1903, when Christian mobs in Kishinev, now the city of Chișinău, Moldova, slaughtered Jewish children, women, and men until, as The New York Times reported, “at sunset, the streets were piled with corpses…”

Interviews with Four Local Authors About Their Latest Novels

Get a Sneak Peek at a Mafia Mistress’s Memoir