Get a Sneak Peek at a Mafia Mistress’s Memoir

The Doctor Broad is the fascinating story of how a woman with a distinguished medical career became doctor to one mobster and mistress to another.

Barbara Roberts is Rhode Island’s first woman cardiologist, the former director of the women’s cardiac center at Miriam Hospital, and still holds a position as associate clinical professor of medicine at Brown’s Alpert Medical School. Raised a devout Catholic, the oldest of ten children, she grew up to be an atheist, pro-choice feminist and anti-war activist during the early 1970s.

In the early eighties, when Roberts needed a lawyer for a nasty custody dispute involving her ex, Ned Bresnahan, a friend recommended Jack Cicilline. Cicilline just happened to do work for Raymond L.S. Patriarca Sr., longtime head of the New England Mafia. And when Cicilline needed a doctor for his mobster client, Roberts offered to help by taking on Patriarca as a patient. Roberts learned later that behind her back, Patriarca’s wise guys referred to her as “the doctor broad.”

In this excerpt from The Doctor Broad, a Mafia Love Story, published next month by Heliotrope Books, Roberts unspools the story of how a fateful introduction over lunch led to her clandestine, four-year affair with Louis “Baby Shanks” Manocchio, reputed to be number 3 in Patriarca’s hierarchy. The relationship continued until the end of 1985; for more than two of those years, she visited Manocchio in the ACI. Roberts met her current husband, Joe Avarista, a sculptor and artist, in 1989. They’ve been married for several decades and live in Jamestown. 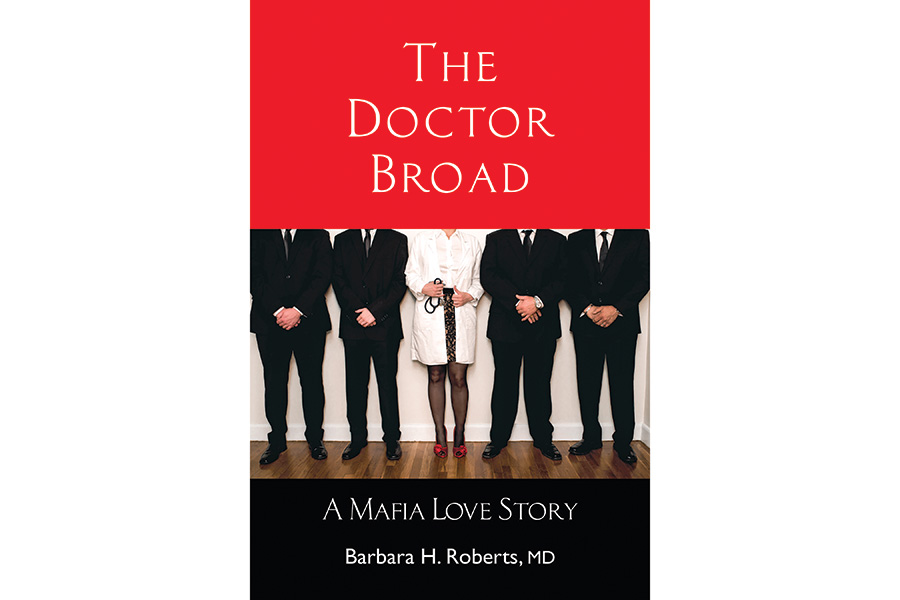 On a Friday in mid-September, 1981, I performed a heart catheterization on an elderly patient who’d been referred by Bob Indeglia for consideration for aortic valve replacement. On the first injection of dye into the left coronary artery, we noted a very tight proximal blockage, one we called “the widowmaker,” — and immediately thereafter, the patient went into cardiac arrest. For close to an hour, we tried to resuscitate him, but to no avail.

I was devastated. To have a patient die from an intervention you are performing is harrowing. I left the catheterization laboratory to inform his family in a fog of misery. As is usually the case, they were kind and understanding, which paradoxically increased my distress. When I’d finished talking to them, it was lunchtime, and I called Jack Cicilline. I related what had just happened and he said, “I was about to go out for lunch. Come up the Hill and have lunch with me.”

We drove a short distance down Atwells Avenue, stopping at DePasquale Square. Decades before, it was lined with push-carts selling fruits, vegetables and in winter, roasted chestnuts, but it was now host to small grocery stores, a poultry vendor, a pharmacy and a restaurant called the Forum, which was one I hadn’t been to before. A large fountain topped with a sculpture of a pinecone graced the courtyard in front of the Forum, plumes of water performing a glissando into progressively larger pools. A few people sat relaxing on the marble rim of the lowest pool, soaking up the residue of warmth that lingered like a friendly ghost in the plaza.

Inside, the hand of a talented interior designer was evident. Warm, exposed beams set off the original brick walls; the tables held Italian tile insets, and a shelf on the back wall displayed an assortment of colorful Italian ceramic vases and urns. Under this shelf was a long banquette, upholstered in a rich maroon paisley material. To the right of the dining room was a small bar with a mirrored backstop and rows of crystal wine goblets hanging overhead.

A succulent aroma, redolent of garlic and olive oil, tomatoes and spices, permeated the air. A man I took to be the manager came over to greet us as soon as we were inside the door. He was of medium height and carried himself with an effortless but steely dignity. He was bald on the top of his head, with short-cropped gray hair, a tanned face and a very slight but unplaceable accent. I guessed his age as somewhere in his fifties. There was an indefinable aura about him that I found compelling. Somehow the air around him had a different density; it refracted light at a sharper angle. “Jack!” he said, shaking Jack’s hand and giving me a look of polite inquiry. “Welcome to the Forum.”

The name set off instant alarm bells in my mind. Was this, I wondered, THE Louis Manocchio, the one who had been “on the lam” for ten years and had only recently returned to Rhode Island? I wracked my brain for other details about him but could come up with nothing more. I had long since stopped buying the Providence Journal and read it only rarely.

“I’m very pleased to meet you,” Louis said, extending his hand to shake mine, then leading us to a table by a window that fronted the square. I can’t remember what we ate for lunch that day, and in truth, I had little appetite after the events of the morning. Louis was kept busy seeing to the normal bustle of a restaurant at lunchtime but visited our table frequently. I had the distinct impression that he knew who I was. He emanated a subtle authority that made his attentiveness seductive and flattering. When we had finished eating, he asked Jack if he could give me a tour of the restaurant, and Jack waved us off. He showed me the upstairs dining room and the kitchen. I had already visited the ladies’ room with its walls of rich, burnt umber tiles, every eighth tile containing the delicate tracery of a flower. He introduced me to the waitstaff and urged me to open an account there, saying that he hoped I would return often.

My impression was that Louis was in some subtle but definite way both courting me and paying me homage. I could feel the tachycardic thrumming of my heart as he took my hand and made a slight bow over it as we left. Out in the square, I turned to Jack: “Is he the one they call ‘Baby Shanks’?” I asked. “He’s the one,” Jack replied, “and I think you made a big impression.” I gave an uncertain laugh, not at all sure this was something I should be pleased about, but I was intrigued. I felt a sexual attraction to Louis, which surprised me no end because I’d never before been attracted to a man so much older than I. Since my breakup with George that summer, I’d been celibate—but with hormones coursing through my veins like a chemical Charge of the Light Brigade, I yearned for sex, for the oblivion and surcease of orgasm. I longed to be stoppered and shaken, to lie under a man, pelvis to pelvis in the slow, grinding dance of lust. My taste in men was clearly atrocious, but over the ensuing days, I could not expunge Louis from my thoughts. Like a ditty half heard on the radio that replays incessantly in the darkened theater of the mind, the opening lines of an Edna St. Vincent Millay sonnet repeated themselves endlessly in my head: I too beneath your moon, almighty Sex, Go forth at nightfall crying like a cat…

I knew it would be insanity to become involved with Louis, despite what I had to admit to myself was an intense and probably mutual attraction. The credibility of my testimony on Raymond’s health would be severely impaired, if not destroyed, if I became intimate with Louis and the relationship became known. I had no doubt that Ned would seize on my relationship with an alleged organized crime figure as further proof of my unfitness as a mother. I’d already lost referrals from some physicians because of my notoriety. I did not need the added complication of becoming known as a “mob mistress.” I tried to put Louis out of my mind, with little success, drawn again and again to reliving that lunch, scratching obsessively at the mental itch his memory had become.