Dune Brothers is serving clam cakes and chowder, fish and chips, oysters and more from its takeout window. 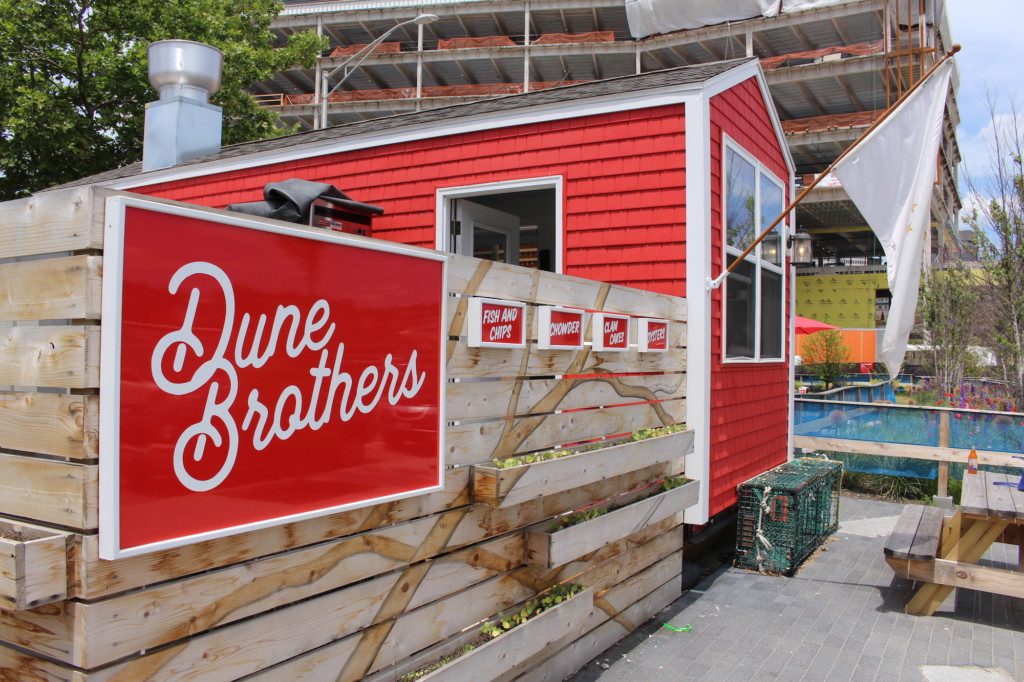 Editor’s Note: This post was updated on June 21, 2018 from an earlier version that was posted in November 2017. Dune Brothers Seafood is on the cover of our July 2018 issue, featuring a Guide to Sustainable Local Seafood.

Rejoice! Providence has a new seafood shack. I’ve been waiting since Blount closed its Jewelry District outpost a few years ago. Travelers often ask me where to get clam cakes and chowder in Providence, and I had been at a loss on where to send them in the city (the answer was always Blount in East Providence, which is seasonal). Until now. 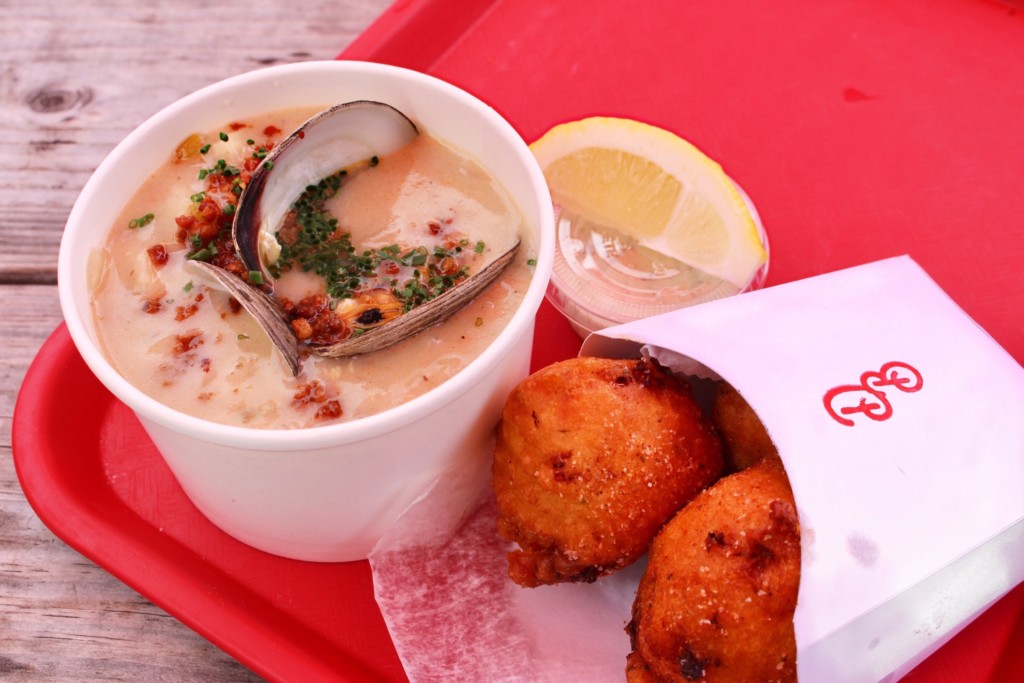 Dune Brothers Seafood serves clam cakes and chowder and fish and chips at a new outdoor space called The Shack, located at 239 Dyer St., in Providence’s Innovation and Design District. The space also hosts events on weekends organized by Stay Silent PVD. The I-195 Redevelopment District Commission selected the business to operate a temporary food concession as part of an event venue and public space to bring more vibrancy to the area during construction. It’s a red shack on wheels run by New England chefs Jason Hegedus and Nicholas Gillespie.

“We’re an unconventional, local, sustainable seafood shack so it’s very chef driven,” says Gillespie. “We change our menu a lot due to what the farms and fishermen have.”

The chowder ($8) has fresh littlenecks – still in shell —right in it, paired with handcut potatoes, housemade salt pork, fresh dill, chives and parsley in a New England-style cloudy, clam juicy broth. It’s as good, if not better – dare I say it? – as our favorite Rhode Island clam shacks down in Narragansett.

The fish and chips ($16 for Cape shark or market price for  Point Judith hake) and clam cakes (six for $8) are coated with a crisp beer batter made with Narragansett lager. They use sustainable fish for fish and chips. This time, it was dog fish, also known as Cape Shark, landed in a boat off Chatham, Massachusetts. It’s as white and flaky as cod or haddock, and you’d never really know the difference. They also have a market fish offering, which is sometimes a whole grilled Rhode Island scup or a similar species served with chourico and kale. The options vary, depending on what’s available. They also offer Walrus and Carpenter oysters (six for $12). Raw oysters for lunch? Why not. 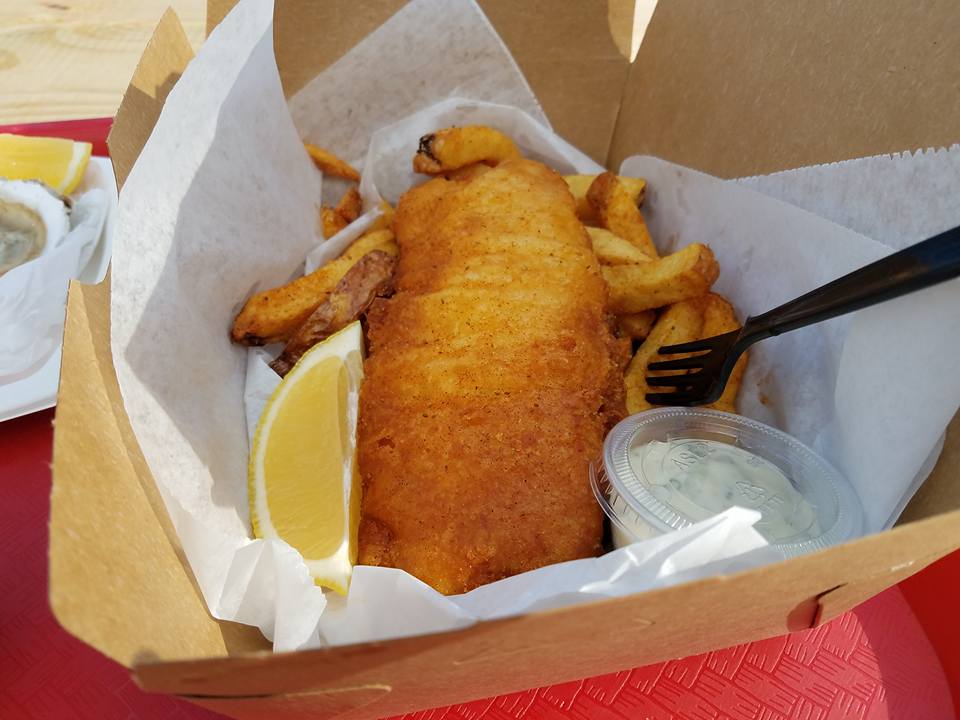 The fish and chips is made with Cape Shark, or dogfish, a delicious white flaky fish.

The chefs are from the area, but they started out doing popups together in Portland, Oregon. “I am from Cape Cod, he’s from South County [pointing at Hegedus],” says Gillespie. “We were both living out there and we started doing these popups because we were both homesick.” They introduced Portland to stuffed quahogs and smelts, and they knew they wanted to make their business full-time, but move back home.

The chefs were looking for a bricks and mortar spot, which they still are, hopefully on the West End. For now you can enjoy lunch and dinner at Dune Brothers Tuesday through Saturday from 11 a.m. to 8 p.m., but before you go, be sure to check their Facebook page to make sure they haven’t sold out for the day.

“The idea is to have people down here all the time,” says Hegedus. “We want to bring people out here to see what’s going on.”

The vast outdoor space at the Shack includes ample picnic table seating (now with umbrellas), so you can grab your food to-go and sit and enjoy it. There’s a porta potty available, too. Take advantage of summer while it lasts at Providence’s newest seafood shack. 239 Dyer St., Providence, 401-648-2598 dunebrothers.com 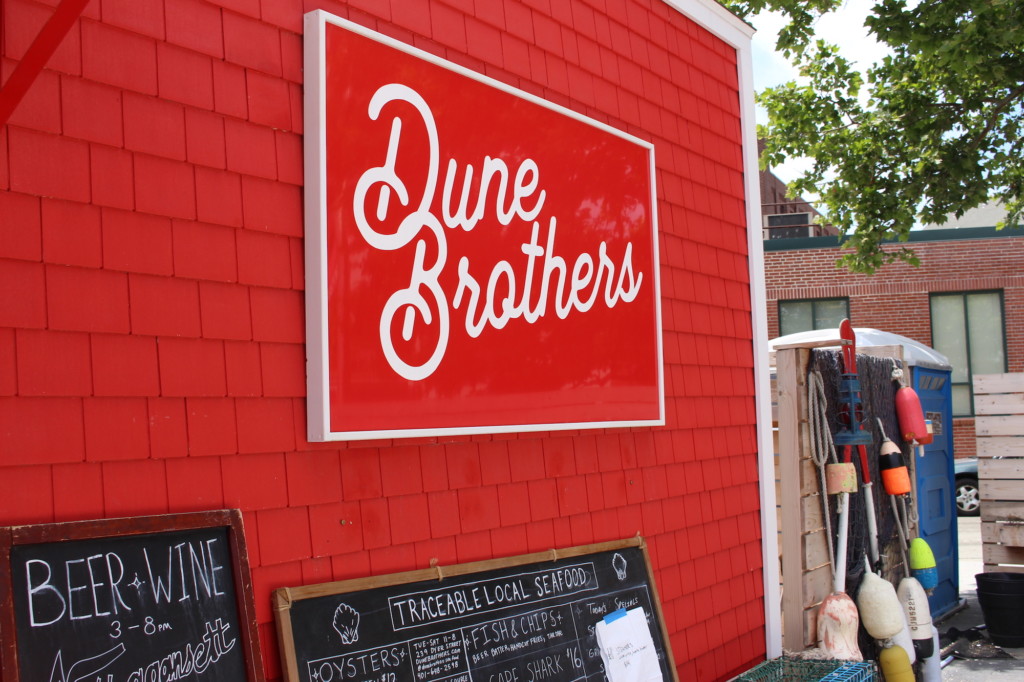